From £35,2058
Drop-top E-Class gets a new face, a new interior and a new straight-six motor. We put this latest E450 Cabriolet to the test in the UK
Open gallery
Close

Since the demise of the BMW 6 Series Cabriolet, roofless versions of the Mercedes-Benz E-Class have enjoyed something of a monopoly in the posh, four-seat convertible marketplace. An Audi S5 Cabriolet is smaller, and not quite as plush; while Munich’s latest 8 Series drop-top is considerably pricier, a bit more focused in its dynamic character, and more or a natural rival for the likes of Mercedes’ own S-Class Cabriolet anyway.

This absence of any bonafide competitors has given the E-Class a healthy dose of breathing room, then. And while Mercedes-Benz will no doubt appreciate that space, it hasn’t afforded the men and women of Stuttgart an opportunity to sit back and let this fifth-generation, ‘W213’ series model tick over unchanged until the end of its lifespan.

For 2020, the E-Class range has been facelifted, and in the case of this range-topping E450 Cabriolet (AMG’s E53 models firmly to one side), that facelift is a fairly significant one. In addition to that snoutier, more visually aggressive looking front end and lightly updated interior that’s common to all new E-Class models, Mercedes has also seen fit to swap the previous E450’s twin-turbocharged V6 out for its new 3.0-litre, single-turbo in-line six.

Codenamed ‘M256’, it’s the same motor that has already appeared in the likes of the latest CLS, S-Class and GLE models; and features the same 48v integrated starter-generator technology - which Mercedes has dubbed EQ Boost - to provide a degree of extra punch and help fill any accelerative flat spots. In E450 guise, the engine alone kicks out a meaty 362bhp and 369lb ft, while the EQ Boost system can dish out an additional 22bhp and 184lb ft at a moments notice. As was the case in the old E450, this is all directed to the road via a nine-speed automatic transmission and Merc’s 4Matic all-wheel-drive system. 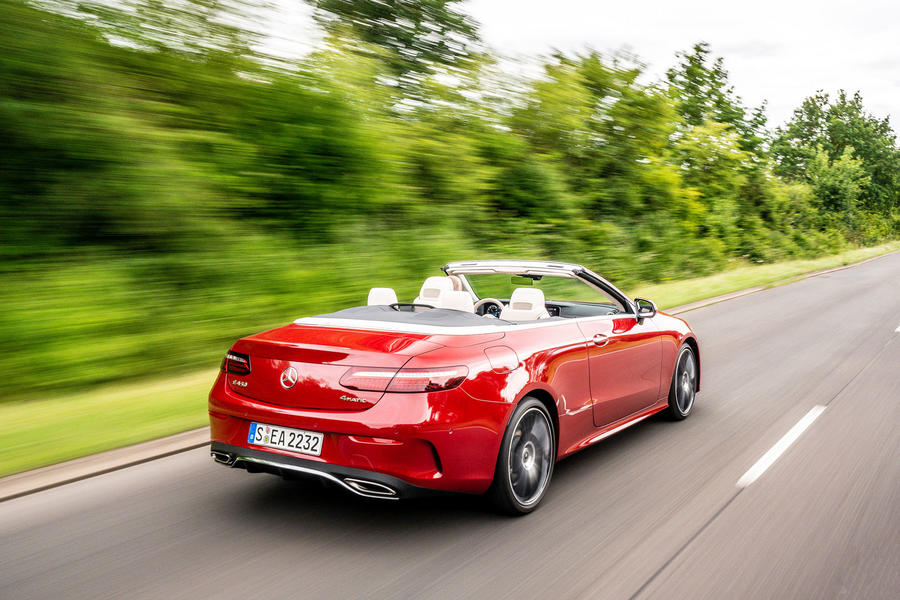 As a machine for lazily wafting about from place to place, this left-hand-drive E-Class is really rather lovely. Drop down into its plush, expansive cabin and the first thing you’ll notice is a redesigned steering wheel. There’s now a much larger centre boss, while new capacitive controls replace many of the physical buttons that adorned the previous model’s helm. Upholstered in leather, it complements the E450’s lightly revised interior wonderfully; this is an environment that balances the more traditional wood and leather finishing elements with the sharp, responsive digital screens that straddle the dashtop with impressive finesse.

The chairs themselves are large and comfortable, but with ample support should you decide to ditch the E450’s naturally laid-back disposition and press on a bit. Adjustability is excellent, and the presence of seat-heaters and Mercedes’ ‘airscarf’ neck warmers will go a long way to keeping you toasty when it’s cold out and you decide to brave the elements.

Which you’ll likely be inclined to do most of the time. Sure, with its folding canvas roof locked in place, it’s hard to imagine that the convertible E450 loses out on much in the way of refinement compared with its hard-top sibling; but fold it away (a job that takes 20sec and can be done at low speeds), and the E-Class continues to do a fine job of shielding you from the outside world. There is of course a lot more wind noise when travelling at pace, but with Mercedes’ ‘aircap’ wind deflector in play, any lengthy lockdown hairdo you might be sporting won’t be blown about too ferociously.

Although that new EQ Boost-assisted straight-six is good for a 5.2sec 0-62mph time, the E450 Cabriolet is very much a car for sauntering about in. There’s an appealingly relaxed, yet aristocratic nature about its motive character, which sort of puts me in mind of the hookah-smoking caterpillar from Alice in Wonderland. With the roof down you get a better taste of the straight-six motor’s sonorous, tuneful soundtrack, which develops from a languid growl into a rich roar as you use the extent of the throttle pedal’s travel. Acceleration is wonderfully creamy and consistent, and the engine pulls strongly right the way through its rev range.

Hook-up from step-off is graceful enough to avoid complaint, and Mercedes’ 9-speed auto ‘box swaps cogs with slick efficiency while on the move. Use the steering wheel-mounted paddles to change gear yourself, however, and you’ll find the E450 does so willingly, although the transmission is a bit too over-eager to revert back to automatic mode if left unattended. This can be remedied by opting for the Manual drive mode, but it proved difficult to then match this with the sportier engine mapping settings. This was a bit disappointing, but perhaps not entirely surprising given this car’s natural target audience.

Our German-market test car’s optional adjustable air suspension lent it a ride that was wonderfully soft-edged and absorptive when set to comfort, but not drastically short on body control when ramped up to Sport and Sport+ modes. With the dampers set to their most aggressive setting you’re certainly still aware of the car’s mass, size and body roll; and combined with a steering rack that’s less up on its toes and more reclined on a chaise lounge in its responses you certainly get the sense that the E450 Cabriolet isn’t a car that’s been set-up with fast driving at the forefront of its mind.

But that said grip levels are high, that slower steering rack is still accurate and it weights up rather nicely through fast, gradual corners. The Mercedes’ width does give you something to think about though, and in truth it proves a far more enjoyable machine when you’re simply punting about. That said, if grandad does happen to be feeling a bit randy on his way to the golf course, there’s still some fun to be had here. 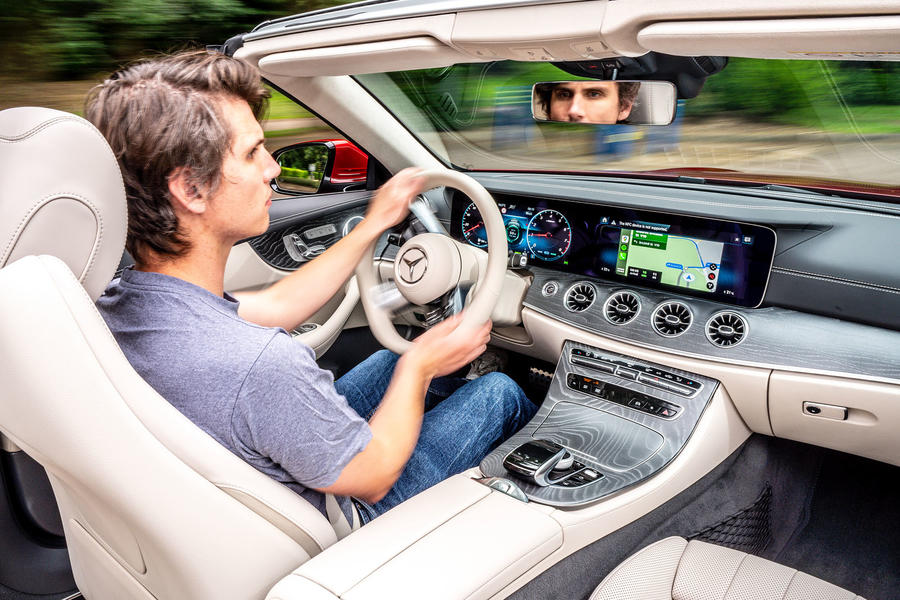 If you prefer your four-seat convertibles to be more relaxed and comforting in their demeanour, but with an imperious punch up their sleeve, then sure. As a long-distance, open-top cruiser there really isn’t much that competes with the E450 Cabriolet save, perhaps, the BMW 840i Cabriolet. But again, that’s more of a natural rival to the drop-top versions of the larger S-Class.

Although Mercedes hasn’t announced exact UK pricing just yet, based on the figures attached to its predecessor you’d expect this E450 Cabriolet to be a fair bit cheaper than the BMW too. In AMG Line trim, the old E400 had a sticker price of £55,715 - so perhaps this new E450 will come in at just over £60,000 or so. By contrast, the BMW starts at £80,935.

And if the E450 is a bit pricey? Well, there’ll be a range of four-cylinder petrol and diesel alternatives to choose from too. But really, in a car like this, it’ll be the six-cylinder that you want, won’t it? 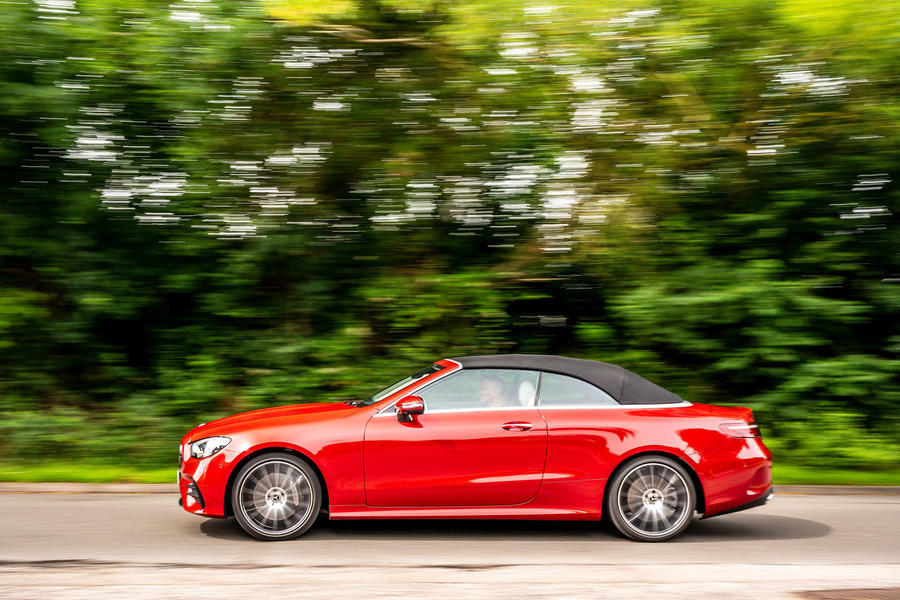 I've read the Aston story 163K
The Bentley 135K
And now this 35K.
You don't need to like it but it does sound comparatively good value even though I'm comparing apples and oranges, but hopefully you get my point.
Greedy brands.
typos1 10 August 2020

OMG, not seen a mullet like that in years !

Surely this class of car is more about elegance than about aggression?  I prefer previous iterations.

If you replace the 3-pointed star on the grille on this one with a pony badge you get a Mustang.