From £17,610
Mazda's limited-run version of its facelifted CX-3 shows improved refinement and technology, but doesn't live up to its dynamic name
Open gallery
Close

Based on the 2.0 petrol CX-3 Sport Navigation, upgrades include subtle silver-coloured lip extensions to its sills and front and rear aprons, redesigned 18in alloy wheels, a tailgate spoiler in gloss black and nappa leather trim to the seats, dashboard and door cards. Ceramic or grey mica metallic paint options are standard, saving you £550, with the total package costing less than a similarly optioned Sport Navigation, which isn’t available with the appealing dark brown upholstery.

The recent range modifications mirror those made to the Mazda 2 supermini – whose platform the CX-3 shares – and most of them are aimed at improving all-round refinement. They include extra soundproofing to the tailgate, boot, dashboard and transmission tunnel, with petrol versions also benefiting from new resonance-reducing engine mounts.

Slightly revised dampers aim smooth the ride, with the front lower arm bushes reworked to improve small-bump compliance. The electric power steering has also been recalibrated to improve precision and linearity, and all topped off with a redesigned wheel. Mazda claims that the steering is now less affected by driveline torque inputs, with its G-vectoring control system minutely adjusting the engine’s output during brisker cornering to achieve this. The same software is also said to strengthen straight-line stability.

The CX-3’s electronic active safety systems are also upgraded; the city brake feature is now able to operate at higher speeds and to detect pedestrians. 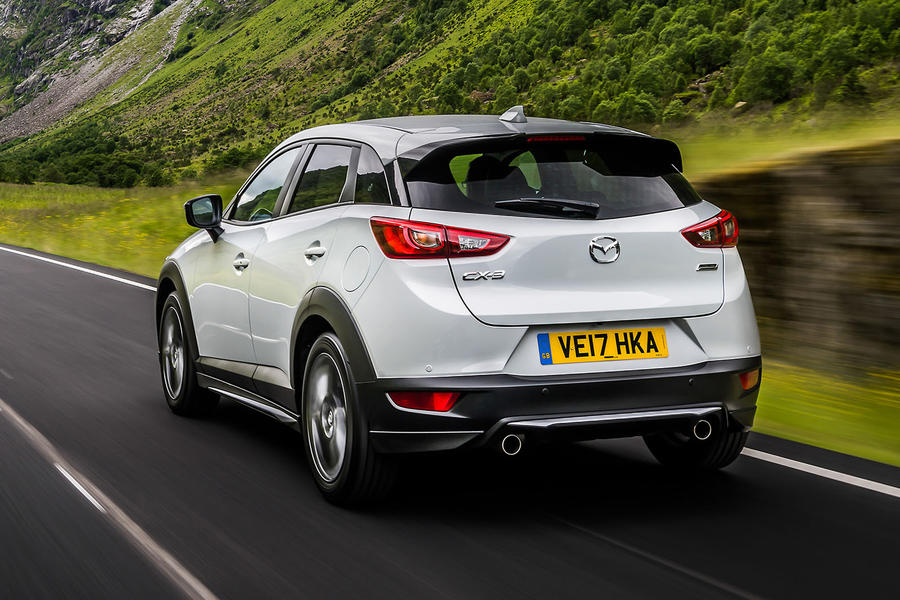 Mazda makes much of its cars being enjoyable to drive and the 2.0 petrol certainly feels enthusiastically lively from the off. It also feels pretty firmly suspended despite the aforementioned suspension tweaks. The first bend reveals decent resistance to body roll, as you’d hope given the limited pliancy, but it also does a good job of revealing the shape of the road below. Still, it does round bumps off, the suspension functions quietly and the limited body roll encourages keen cornering.

The CX-3 responds effectively enough to this but without the verve that Mazda’s dynamic ambitions, and the engine’s power delivery, promise. The suspension’s rather wooden reaction to topography and the steering’s lack of road feel are the cause, despite the wheel’s decent precision and consistency.

Only keen drivers will pick up on this shortfall, however, because the CX-3 is entirely capable – even if it's stiff-legged. The powertrain is more polished. There’s a good spread of torque, the peak arriving quite early for a petrol at 2800rpm – this is doubtless why the gearchange indicator encourages upshifts well before you might expect to make them. And it duly shuffles along in traffic with no trouble in these higher gears. There are six in all, allowing for a quiet cruise. This engine is better suppressed than the Mazda 2’s 1.5 when you rev it.

The not-far-off-oxblood brown leather of the GT Sport certainly lifts the ambience of the interior; the seats are trimmed with a mix of this and similarly hued suede. The brown leather dashboard crashpad also adds classy contrast to the hard plastic of the main facia moulding. It’s pretty comfortable up front, with plenty of space and a good driving position; the CX-3’s ergonomic package has improved with the provision of neat head-up display on this version.

Rear room is less impressive, the packaging here being better suited to growing kids than adults. But the boot is reasonably sized and comes with a false floor that provides a flat platform when the backrests are dropped. 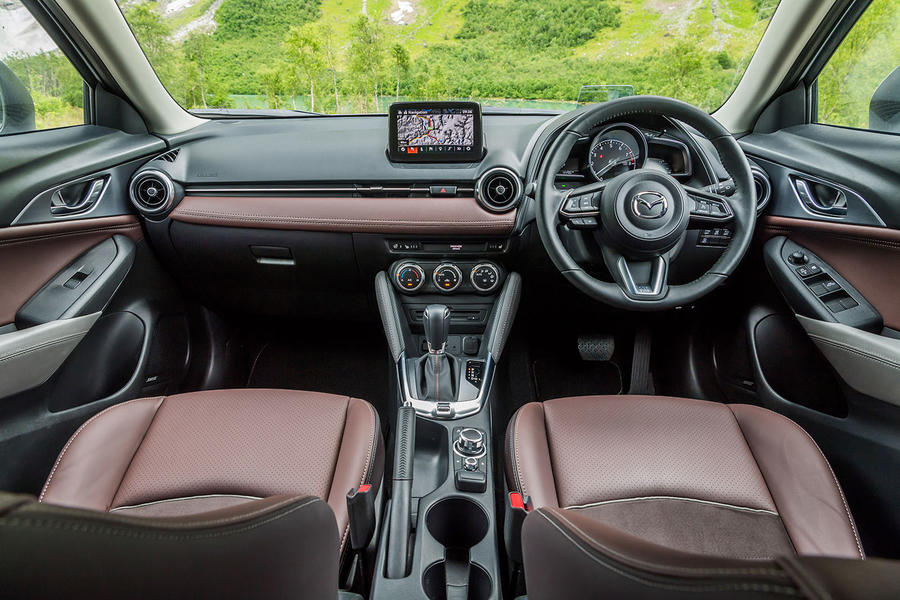 The ambitiously named GT Sport isn’t a bad deal if you fancy a high-end CX-3. The flashier paint and more sophisticated interior are better value than a heavily optioned version of the model on which it’s based (and you can’t have the brown leather and bodykit extensions on the Sport navigation, anyway). Once this limited edition is sold out, these features are bound to reappear.

Whether you should buy a CX-3 ahead of other crossovers is another issue. The revised CX-3 is undoubtedly a little more civilised than it was, but there’s strong to overwhelming competition from the Seat Ateca and Nissan Qashqai, both of which are better all-rounders; and if you fancy something more offbeat, the Toyota C-HR appeals despite disappointing engines.  The CX-3 is stylish, but it needs more depth of sophistication. 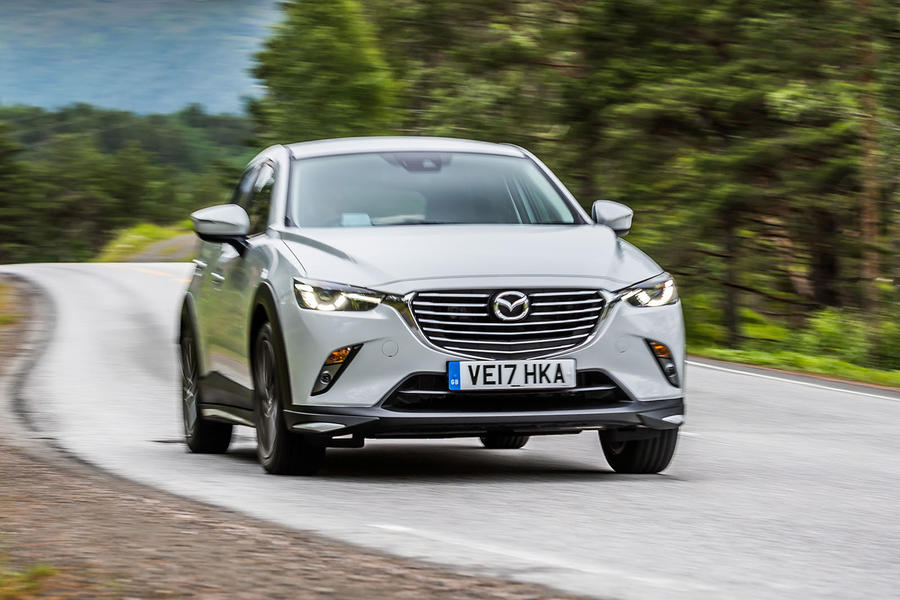 I like the CX-3 but it's too small, competing with the Juke etc, whereas the CX-5 is too big. Surely Mazda should be releasing something to rival the Qashqai and sit between their two current offerings.

I test drove a CX-3 a couple of years ago and it was a real hoot. I also felt it was a bit small. My comment to the salesman was that they should put the 165bhp version in this car, then it would really motor. My partner has a Mazda2 90bhp and it's both very reliable and economical to run (she gets well over 50mpg in hers).

Autocar in "Mazda with 'consistent' steering" shock!  Still a rather luke-warm review.  I'd have had this as being rather smaller than the Ateca - more like a competitor for an Arona (albeit, if that's the case then the price looks a bit high.  I think it's one of the better looking small fauxUVs and the drivetrain will be great to use.

Deserves to do well and for a shade under £23k with that kit is pretty impressive, well ahead of the Qashqai. Would be better still with the more powerful version of this engine

Agree entirely. I wonder why Mazda doesn't fit the 165bhp version in this car, especially in this version.

Agree entirely. I wonder why Mazda doesn't fit the 165bhp version in this car, especially in this version.