From £24,1158
Updated Ford Mondeo rival remains a convincing choice six years on from launch, and mid-range 2.0-litre petrol is the sweet-spot of the petrol line-up
Open gallery
Close

Yet another facelift for the third-generation Mazda 6. If it feels like there’s been quite a few of those, you’d be right; this is the third range update the Volkswagen Passat rival has benefitted from since it was launched a full six years ago.

Such frequent revisions are necessary because six years is an awfully long time in the car business. Almost every rival has moved on a generation since the 6 first graced the motor show stands.

Often, no amount of nip-and-tuck can really revitalise a design of such vintage, but we reckon Mazda’s saloon remains among the more visually appealing shapes in the class. The changes for 2018 are subtle, including a deeper, Mazda CX-5-aping grille, new LED headlights and a chrome grille surround extended underneath them. Nothing too drastic, thankfully.

Clearly, what customers were crying out for more loudly was a more powerful petrol engine, hence the introduction of the new 191bhp 2.5-litre unit, which we tried last month. It’s timed perfectly with the wide-ranging consumer shift from diesel to petrol. At the same time, Mazda has tweaked the existing 2.0-litre petrol with new intake ports, upgraded pistons and revised fuel injection and cooling systems.

Significant revisions to the 6's suspension layout and steering are aimed at improving ride comfort, precision and stability, while additional noise insulation boosts refinement. All petrol engines also now get an active shutter for the front grille to improve aerodynamics.

Finally, the interior been worked on, with new materials, comfier seats, an altered centre stack and a technology upgrade including, as is fashionable, a more comprehensive suite of driver assistance systems. 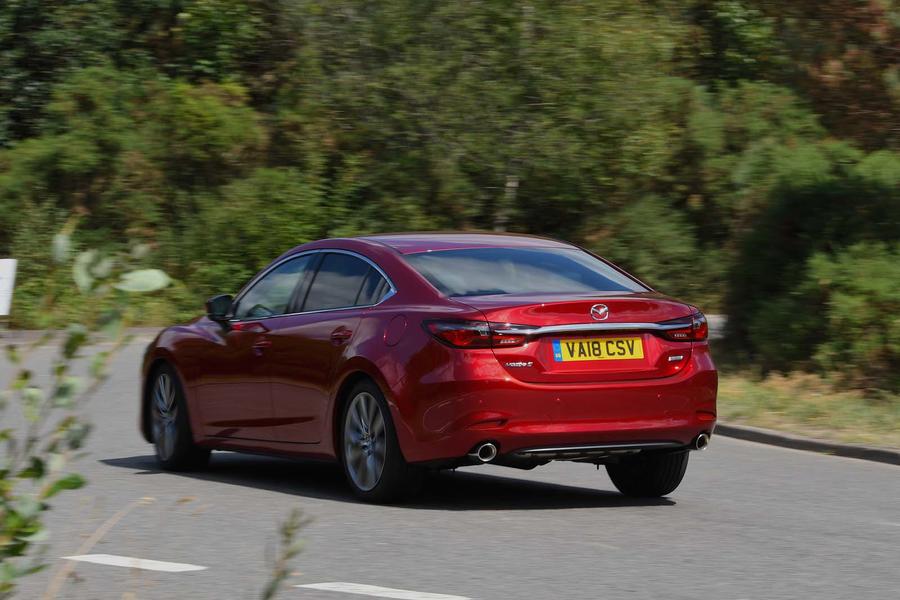 Mazda’s persistent tweaking of the 6 has resulted in a car that has kept up with the pace set by a flurry of newer rivals. Earlier in its life, the sleek exterior was writing cheques that the rather cheap-feeling interior couldn’t cash, but now seemingly every surface within reach is covered in plush, soft-touch materials.

The layout remains easy to get on with and driver-focused. The new, larger central screen is clear and crisp, while few rivals better the rotary click wheel control arrangement for simplicity. The new head-up display displays just enough information but isn’t too cluttered, while Sport Nav+ spec finds a neat balance between price and kit.

We’d like the driver’s seat to go lower, though, particularly as Mazda is targeting the sportier offerings in the segment. We also have an axe to grind with the autonomous braking system, which flashes up ‘Brake!’ warnings on the head-up display far too readily, even when the cut-in distance is in its closest setting.

Otherwise, the 6 is an inviting place in which to travel for four adults. Granted, rear seat accommodation isn’t as generous as in the Skoda Superb, but only because head room is a little tight for taller occupants on account of the sloping roofline.

Despite apparently wide-ranging tweaks to the direct-injection, naturally aspirated 2.0-litre petrol engine, it performs largely as before. It’s the antithesis of the many gutsy yet characterless turbocharged units found in rivals, requiring you to keep it on the boil to maintain progress and emitting a sporty (if slightly intrusive) note when you do so. The reduced wind and road noise perhaps serves to make the engine a little louder than it should be.

The lack of low-down urge may frustrate those used to the point-and-squirt nature of, say, a 1.4 TSI Superb, with the 6 requiring you to drop two or even three cogs on the slick, six-speed manual 'box for a safe overtake. But this gives it a unique character in its own right, even if outright pace is never more than acceptable.

The unit is remarkably frugal in practice, given the mass it has to lug along, though, nudging 40mpg over a long, mixed test route with some hard driving.

Mazda has done more than a quick fettle of the spring rate for the 6’s chassis. New front steering knuckles, raised lower arm mounts, larger-diameter dampers and lower steering knuckles are just some of the changes that have been made.

What it all translates to is significantly more rounded dynamics. We’ve never had much to complain about in terms of how the 6 corners, and it remains an agile, composed and enjoyable steer. There’s a noticeable amount of roll when you really lean on it, but there’s an almost Mazda MX-5-like keenness to change direction, thanks to precise and direct steering.

That was true of the old 6, but it’s the ride that is most improved. Even on the 19in wheels of our test car, pockmarked surfaces are well isolated, and it rivals the Mazda CX-5 for big bump absorption. The 6’s blend of maturity and nimbleness means it gives pricer executive models, such as the Audi A4, a run for their money. 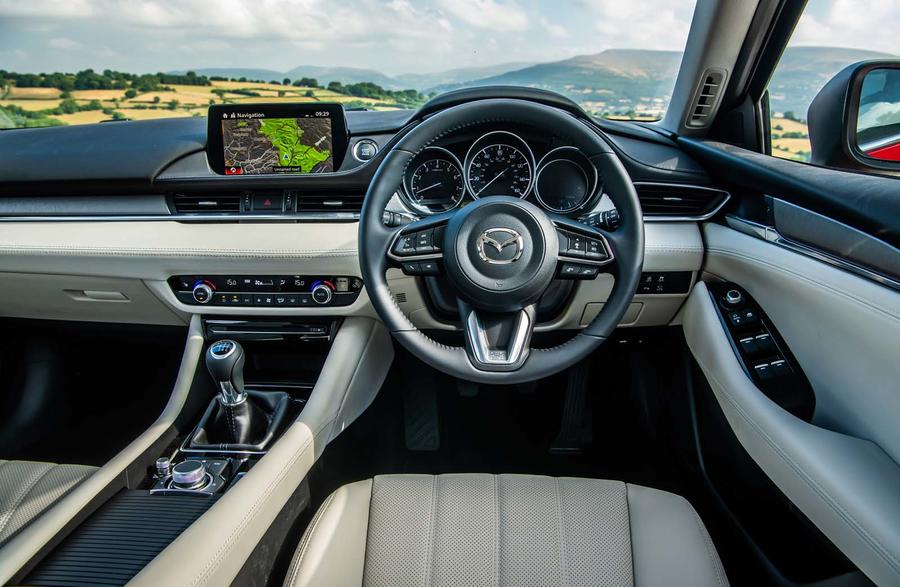 If you’re after a large family car that still offers something to parents with a bit of lead in their pencils, you should consider the 6. It’s capable of being engaging when you’re in the mood and cosseting when you just want to get home.

In some ways, the gutsy 2.2-litre diesel is the better fit for a car of this size and weight, particularly as it’s actually more refined when getting up to speed. But the 2.0-litre petrol is a characterful (if hardly fast) offering, and it rewards you for wringing it out by maintaining surprisingly good economy figures.

The Skoda Superb trumps it on paper in terms of space and value, while the Volkswagen Passat feels like more of a quality product inside. But, despite its age, the 6 still earns a place among the big hitters of this class. 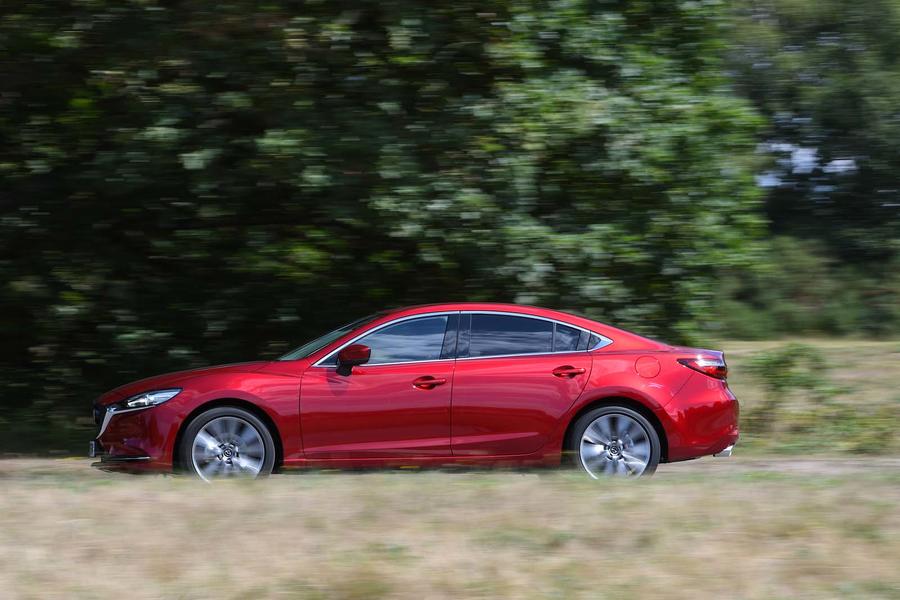 I have always liked the 6,

I have always liked the 6, and all current mazdas, I especially like the fact that they are naturally aspirated as I prefer it.

that ends with a plug for two VW group products.

I believe they have done into a higher spec version called the GT Sport Nav+.  According to the website it has 194PS.  Happy days!

I believe they have done into a higher spec version called the GT Sport Nav+.  According to the website it has 194PS.  Happy days!

Yes, buts a 2.5litre 4 pot and only available with an automatic geabox.