From £34,2547
Our first European drive of Lexus' GS replacement reveals an improved car of many talents - but with a familiar Achilles' heel
Close

A relatively big change in what is traditionally a conservative sector. Lexus has decided the time is right to change tack in Europe and focus on delivering volume, and the new ES plays a core role in that.

ES is a nameplate that will be instantly familiar to those in the US and Asian markets, given Lexus has shifted 2.3 million of the things since the first generation went on sale way back in 1989. It’s not a known quantity in Britain, despite now being lined up to replace the GS here.

The reasoning is sound, however. The GS survived four generations in the UK without ever really capturing the market. But where Lexus always seemed content carving its own path with a modest 0.5% market share, now targets have been set to double that in the next year or so.

The ES has greater potential to increase sales and profitability once supply issues have been ironed out (Lexus’ biggest markets can’t get enough of them), because unlike the rear-wheel drive GS it can compete financially with the fleet-heavy lower rungs of the executive sector: mainly the four-cylinder offerings from Mercedes, Audi and BMW.  The front-wheel drive platform is adapted from that of the hugely popular Toyota Camry, allowing Lexus to benefit from greater economies of scale and lower build costs.

It means the ES is cheaper than the car it succeeds - a rare thing in this sector - but features more standard kit. The platform also brings more space, while Lexus claims better refinement and a more polished driving experience despite the loss of the ‘enthusiasts choice’ of chassis layout. 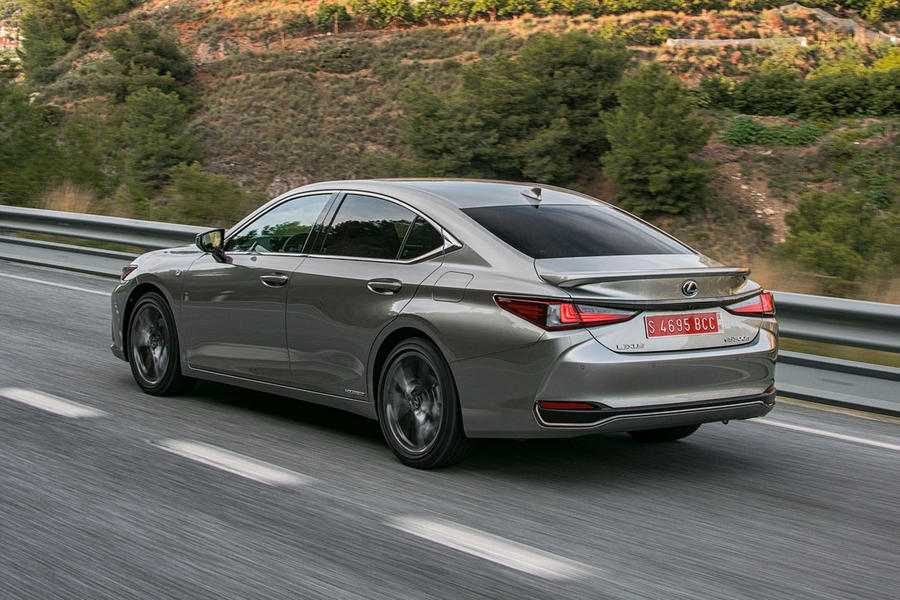 Lexus is as keen as you’d expect to point out that this is much more than a reskinned Camry, despite obvious design similarities.

For starters, it adapts the GA-K platform by using lighter high tensile steel and stronger joining techniques than its Toyota relative, with additional chassis bracing and, according to engineers, the most soundproofing material of any Lexus to date.

The suspension is a bespoke setup, with new components including swing valve shock absorbers - claimed to be a world first - that mitigate low-speed body movements. Alongside this, the top two trim levels feature lateral bracing in the form of structural dampers, while F-Sport trim brings two-mode adaptive damping.

All of this effort may be ignored by some, who will disregard the ES on account of its humble relation and ‘wrong’ driven wheels. They shouldn’t. While still a way short of the lofty standards set by the BMW 5 Series, the ES features a surprisingly well-rounded and composed chassis.

The comfort focus is immediate from the get go. Isolation from external noise is excellent, with the new hybrid powertrain (more on that in a sec) keeping things hushed and smooth around town. It feels softly sprung, but with greater damping control than the larger LS, although some of the larger surface scarring around our Spanish test route caused the odd disturbance.

The damping sophistication means high-speed cruising is assured and stable, helped by reassuringly weighty steering. None of this is a particular shock when it comes to a Lexus, but what is a surprise is how assured it feels in the bends.

The whole front-wheel drive thing is largely a non-issue, as the ES handles with decent composure and agility when driven at eight-tenths. A kerbweight at least 100kg less than the GS helps here. Body control is good, and while the steering isn’t particularly communicative, its weight and directness is confidence inspiring. When the front-end does begin to surrender grip, a lift of the throttle will bring it back into line before the electronics reign you in.

Nevertheless, this is car at its best when the pace is taken down a few notches, allowing the ride compliance and general serenity to shine through. We also tried an ES F-Sport with adaptive damping that seemed to be of little benefit - the ride seems about the same in Normal mode, and becomes too fidgety in Sport.

There is one dynamic black mark, though, and it’s an important one. Lexus’ familiar 2.5-litre four-cylinder hybrid powertrain actually enters its fourth generation here, with almost no shared components and too many technical developments to list here. Power output is similar, but Lexus claims further improvements in thermal efficiency (an impressive 41%), fuel economy and drivability.

Unfortunately, any improvements in the latter respect weren’t really registered by this tester, with frustration again caused by the motor's relationship with the CVT gearbox. Driven at a relaxed pace on flat ground, keeping things smooth and quiet isn’t difficult thanks to a progressive throttle, but up the pace or introduce any sort of incline and the peace is disturbed by an discordant ’mooing’ from the engine bay.

With an 8.9 second 0-62mph time, performance is best described as modest, but an attempt to exploit what power there is is met by the usual cacophony as the torque-light motor soars to its redline and stays there until you back off. The steering wheel paddles seemingly have next to no effect on the unpleasant din, unlike Subaru’s Lineartronic CVT ‘box which has a fair stab at mimicking stepped changes.

It’s not an overriding issue in something like a Toyota Prius, but in an otherwise capable luxury car the expected level of effortless performance and refinement is lacking. It’s a shame, too, because in other respects it’s an impressive powertrain - around town the lack of physical changes make it plenty smooth enough, while 50mpg is achievable with some sensible driving.

Elsewhere, there’s plenty to like. It’s longer, wider and slightly lower than the GS, combining with better packaging due to that front-wheel drive layout to bring rear seat room among the very best in this class. Legroom is plentiful, and six footers will have no headroom issues despite the mounting of the new, smaller nickel-metal hydride battery pack underneath the bench. The boot is a decent size, too - it’s just a shame that structural bracing prevents the seats from folding down for longer loads.

The cabin is typical Lexus fare, with near-perfect fit and finish, the odd questionable material, and truly sumptuous yet supportive seats. The oft-criticised infotainment system has been updated with a bigger screen (eight inches or 12.3 inches depending on spec) clearer graphics and new menus. The touchpad-based control system is at least now partially useable on the move, but it still lags behind models with rotary control dials for ease-of-use. 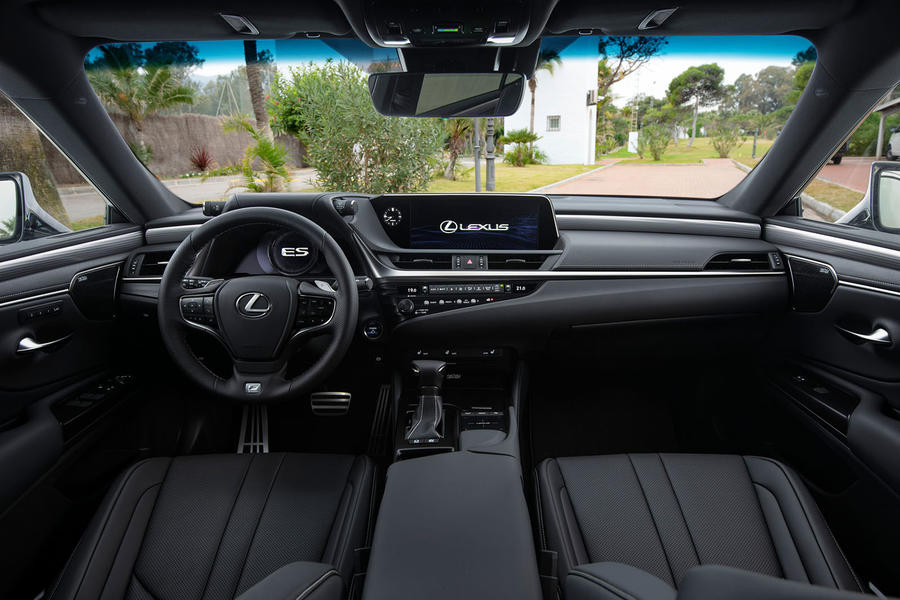 Powertrain aside, the ES is probably the most competitive mainstream Lexus on sale. It’s dynamically comparable to a Mercedes E-Class, rides and steers better than a Volvo S90, and is closer to those two cars than the GS ever was to the 5 Series and Jaguar XF.

The ES300h’s low Benefit in Kind rating will surely appeal to fleet buyers put off by diesel offerings, too. And they’d be getting a fine car - but with no plans to introduce another powertrain, keen drivers that like to exploit their car’s performance and enjoy some mechanical interaction should absolutely look elsewhere.

The economy-focused hybrid has its merits: it’s cheaper to buy than a full plug-in hybrid, doesn’t require messing around with cables and should be endlessly reliable. For traffic-clogged commuting, its simplicity and frugality is ideal.

We’d opt for a base spec with a choice option pack rather than this fully-loaded Takumi model. The few thousand pounds saved there could be put towards something without a CVT gearbox to enjoy driving at the weekend. 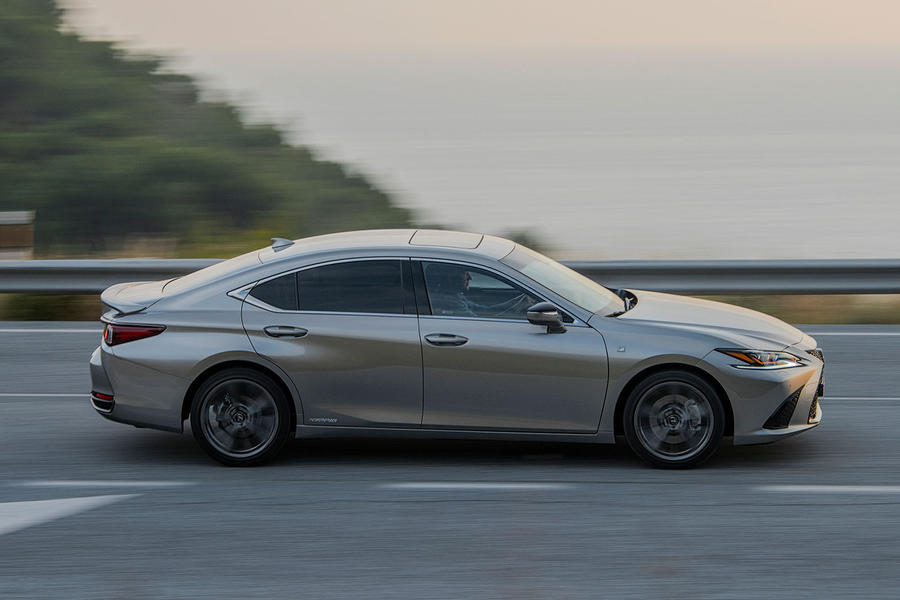 For a 4 pot non-turbo'd powered car based on a Toyota Camry that's unpleasant to drive! The UK has truly gone insane.

For a 4 pot non-turbo'd powered car based on a Toyota Camry that's unpleasant to drive! The UK has truly gone insane.

"The UK has truly gone insane"...WHAT?. Now explain what the country known as the United Kingdom, has got to do with this new car and therefore according to YOU, it...whatever it is, has gone insane?. TwIT, the w is silent, as you should be.

Have you driven this car?...no...it has not yet been released to the public yet. Only unpleasant thing in this whole situation is YOU.

I sat in one at the weekend.

I sat in one at the weekend. In terms of room, its OK, but headroom is limited in the back if you are 6 foot 2, and leg room only just ok behind a 6 foot 2 driver. The materials seem a step back from the really high quality interior of other Lexus offerings too, although still nice. Sadly privacy glass appears standard across the range (perhaps everyone with a Lexus has really ugly kids to hide?).

I have no idea about how it drives, but the CVT isnt promising, but test CO2 numbers are amazing for something so big, so will make a great company car for those not bothered by the gearbox.

For private buyers it seems a real shame that the ES350 the rest of the world gets with a proper torque converter box and a tuneful V6 isnt available, but then that could be said of almost all of the Lexus UK products.

The previous GS was quite a pleasant if somewhat bland car. My wife got lent one of the light hybrid ones as a courtesy car when she ran an IS200 a few years ago. This one strikes me as a four wheeled domestic appliance. I just don't get why manufacturers still persist in fitting CVT gearboxes. I can only assume they are cheap. They were nasty when my mother had a Volvo 66 many years ago and in rental cars I have had more recently, they are still nasty noisy things which seem to totally inhibit what little performance most rental cars have. When there are alternatives as good as the ZF 8 or 9 speed auto box or 8 speed PDK type boxes like in my Panamera, why would you opt for a CVT?

When there are alternatives as good as the ZF 8 or 9 speed auto box or 8 speed PDK type boxes like in my Panamera, why would you opt for a CVT?

I believe that a CVT has economy advantages, but agree with you that most people would give that up for a better drive.

When there are alternatives as good as the ZF 8 or 9 speed auto box or 8 speed PDK type boxes like in my Panamera, why would you opt for a CVT?

CVT is central to how Synergy Drive works. Google it.

The previous GS was quite a pleasant if somewhat bland car. My wife got lent one of the light hybrid ones as a courtesy car when she ran an IS200 a few years ago. This one strikes me as a four wheeled domestic appliance. I just don't get why manufacturers still persist in fitting CVT gearboxes. I can only assume they are cheap. They were nasty when my mother had a Volvo 66 many years ago and in rental cars I have had more recently, they are still nasty noisy things which seem to totally inhibit what little performance most rental cars have. When there are alternatives as good as the ZF 8 or 9 speed auto box or 8 speed PDK type boxes like in my Panamera, why would you opt for a CVT?

"Just dont get..."try checking out the sales figures across the Atlantic, over all of the generations of this model...and comments in this thread in response to your lack of understanding.

Rebadged Toyota. Begining of end for Lexus in qudos stakes.