From £32,9157
Forget the emotion: the Toyota Camry saloon, tweaked for reintroduction in Europe, is a smooth and refined operator
Open gallery
Close

This is the European version of what you get if you order an online cab from Los Angeles airport. The Toyota Camry is the most successful big saloon car in the world, and it was a nameplate you could get in the UK until 2004, when it was canned because the European big saloon market was going big on diesel and the Camry didn’t offer one.

Now? The big saloon market is going nowhere particularly fast, and it's particularly ordinary for the Avensis. So, the Avensis is being dropped and the Camry, available in Europe only with a hybrid powertrain, is being reintroduced.

The internal combustion component of its powertrain is a 2.5-litre four-cylinder unit with some fancy straight inlet ports (making the fuel swirl and therefore burn more efficiently) and both port and direct injection – each has different advantages at different revs and throttle openings. The overall thermal efficiency is 41%, says Toyota, which is rubbish compared to an electric motor’s 90-odd per cent but good for a petrol unit.

It drives the front wheels through Toyota’s hybrid system, which uses the drive engine, a starter motor and a drive motor (motor generators 1 and 2 in Toyota speak) with a planetary gearset linking them. This allows the drive motor and engine to run at any speed, regardless of the wheel speed, because the starter-generator will be there to make up the difference.

It’s a brilliantly simple concept with, presumably, brilliantly complicated control software, which is why Toyota engineers get the hump if someone calls it a continuously variable transmission. Combined, maximum power is 215bhp, with fuel consumption likely to be confirmed at an official 61mpg (although we saw 40+ mpg on the trip computer).

All of those drive shenanigans aside, it’d also be slightly disingenuous to say Camry replaces Avensis, because, as befits a car they sell more than 400,000 of per year in the US alone, it's bigger. At 4.89m long, it’s between Ford Mondeo and BMW 5 Series in length, while at 1840mm wide across the doors, it's just narrower than a Mondeo, but at the top end of the D-segment either way.

It's based on Toyota’s recently introduced TNGA (Toyota New Global Architecture) platform, whose advantages, Toyota says, include a low engine location, which allows a low dashboard, thus lowering (improving) the centre of gravity. There’s also lots of high-strength steel in the body, apparently meaning the A-pillars are thin and the body stiff, while the battery for the hybrid system fits beneath the back seats, as does the fuel tank. And the rear suspension is by fancy double wishbones, doncha know.

Not that it’ll matter, because big saloons are big and boring to drive. But hark! Here’s Masato Katsumata, Toyota’s global chief engineer for the Camry. His first gig in the company was as a handling engineer, while he’s also been senior vice president for R&D in Europe. And he owns an early Celica.

“We want to create emotion in a hybrid system,” he says. The rigid body, particularly where the steering is mounted, “contributes to realising dynamic performance”. This, it’s fair to say, would be a bit of a departure for the Camry, no? But European models get different dampers from US cars, plus bespoke tuning of damping, springing, anti-roll bars and steering. So let’s see. 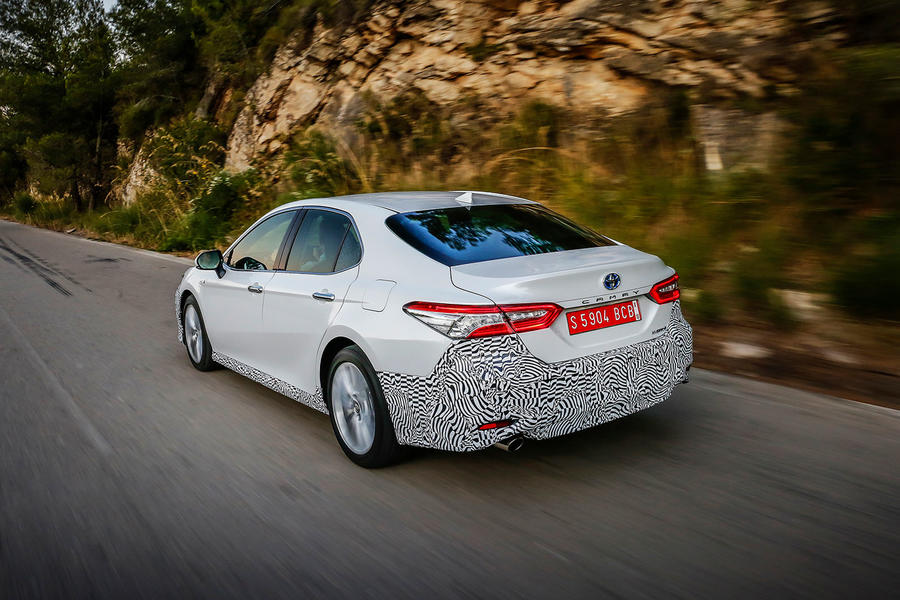 Inside, it's large, comfortable, all of the things you expect of a Camry and some things you wouldn’t.

Among ‘things you wouldn’t’ are that the driving position can be really quite low-slung if you want, with a dropped seating position and a wheel that reaches a long way towards you. Or not, if you prefer.

Among the things you would expect are a generous amount of rear leg room and a non-European version of pseudo luxury. Soft-feel materials, yes, but a mixed array of them along with some overly polished hard surfaces (is it meant to be wood? Copper? Both?) an old-school mechanical auto gear selector and smallish infotainment touchscreen.

It doesn’t take long to be impressed by the way the Camry steers. Colloquially, engineers throughout the industry talk about a 50-metre test – how a car feels as soon as you get in it. Its control weights and low-speed steering and ride tell you quite a lot about how much you’ll like it later on. And the Camry’s smooth, accurate, if relatively weighty steering and easy responses mark it out as a pleasing companion in those first yards.

It rides pretty well at all times. You can sense that the centre of gravity is low; there’s limited roll and pitch but it can also feel like it’s carrying a fair degree of weight low down. It’s solid, secure and stable, but it lopes along, un-fleet of foot as a 1670-1735kg, near five-metre-long saloon is bound to be. It’s agreeable, capable and comfortable transport, but it’s not, like, say, a Kia Stinger, shockingly dynamic transport.

Neither is the engine/motor combination quite as ‘emotional’ as it’s claimed it is. But, you know, that’s actually fine. What the Camry does is bring you internal combustion and electric power and meld the two in expertly seamless fashion. Ask for a lot of acceleration and you get it, accompanied by a monotonous engine drone, but in general driving, the petrol unit is far more muted, mooching between power sources with genuine skill. I’m not sure anybody else does that better.

This all compounds to make the Camry an excellent cruiser. The kind of car you could get out of three hours while barely registering that you’d been in it at all. 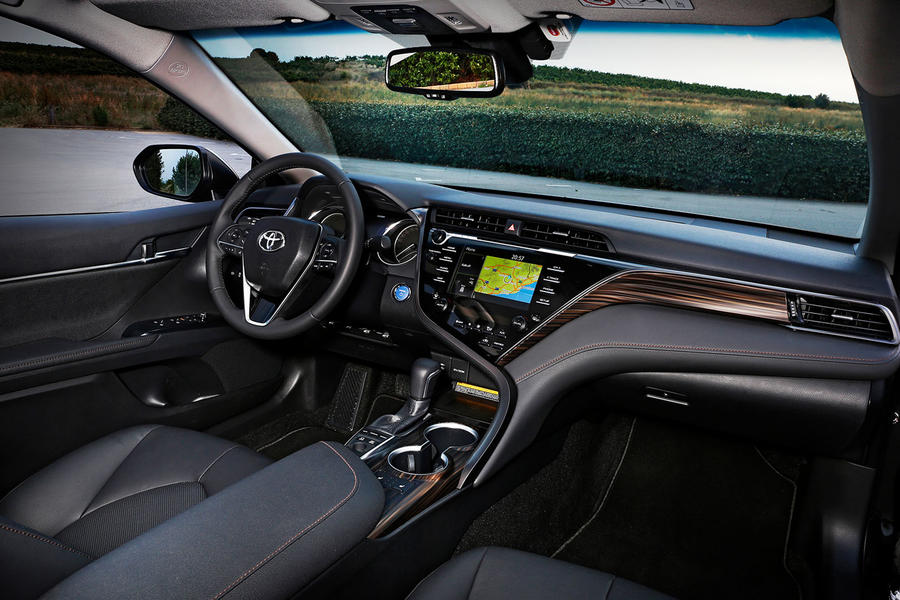 Think, then, of the Camry not quite as the dynamic new entrant to the D-segment that some might lead you to believe. But know that it’s capable, spacious, quiet and very comfortable.

It won't arrive in the UK until next spring, so Toyota is still to decide on the pricing. High twenties to early thirties is where you get a big ordinary hybrid D-segment saloon elsewhere, so let’s call it £30,000. And three-and-a-half stars, with the potential to move half a star either way, depending on the final specification. Regardless of whether you end up sitting in the front or the back. 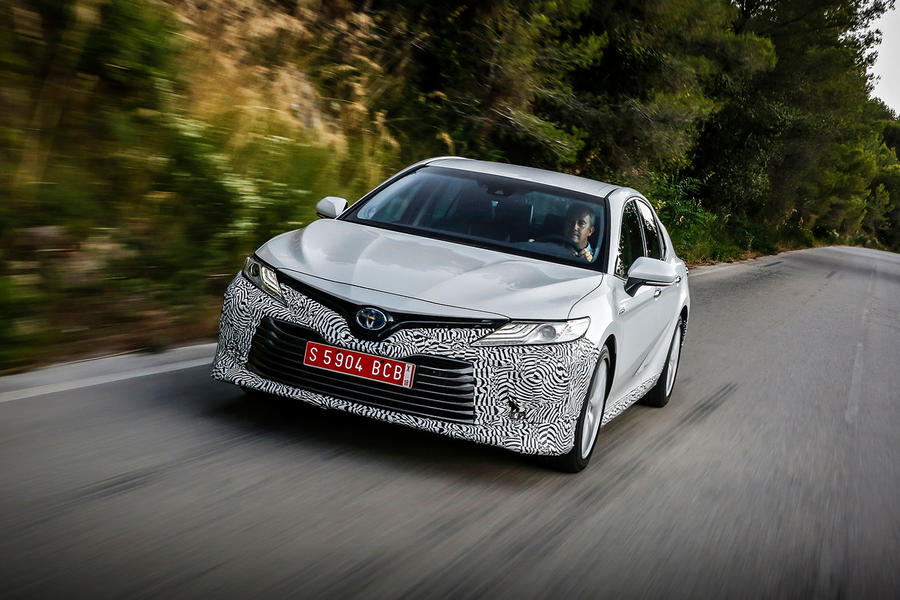 I should add that the ride quality of the 2017 model I’m driving is poor. My 5-series has a far superior ride quality even on 19” wheels compared to the Camry on 17” wheels. The Camry I’m using is a poverty spec car, a GL, so it does without most mod cons that I have even on my old 2003 cars, such as rain-sensing wipers. In summary then the Camry feels very old, is very basic and is certainly not in any way luxurious, but as others have said it will no doubt out-last most other cars on the planet, because, unlike German cars, there isn’t much on it to go wrong. It’s ok at the right price but unless the 2018 model is significantly better, £30k is simply too much.

I’m currently driving a 2017 Camry around New Zealand and all I can say is that it’s not no £30k car, so unless the 2018 model is significantly better then it won’t sell well in the UK. It feels incredibly cheap compared to my 2017 5-series in so many ways. The door cards are shiny black plastic, there is no soft rest for the driver’s knees when cornering sharply through mountainous terrain, the non-hybrid 2.5 engine takes a long time to pick up and is very thrashy at high revs. The economy has been low ‘30’s mpg on long drives with a maximum speed of 60mph. I personally find the driving position woeful with my right knee sitting between a hard door handle and the ignition key which I don’t want to knock ( I’m 6ft). The boot is big and there are acres of leg room in the rear so it will be great as a taxi, but it’s no luxury cruiser. Prior to renting it I had thought that I might be impressed with it, and I thought I might be left with the impression that premium German cars were not worth the premium. At £20k (it’s cost in New Zealand NZ$39k) it’s probably OK, but at £30k it will be too close to premium saloons and it certainly isn’t one of the those.

This car will outlast all the

This car will outlast all the German marques in terms of reliability and low running costs as most if not all japanese cars will, the myth that runs about german cars being great cars lasts about three years, then things start going wrong- like the first big repair bill.

Then reality bites and bites big.