From £40,4009
Biggest Defender gets plug-in hybrid drive and, depending on how you use it, could well be the most compelling version yet
Open gallery
Close

This is the first of two Land Rover Defenders we’re trying this week, and although it’s less glamorous than the one with the V8 supercharged engine (stay tuned), it turns out to be more compelling, to the extent that it could be our favourite Defender yet.

The Land Rover a plug-in hybrid, badged P400e, and available in long-wheelbase 110 form only at the moment, so five doors and 5.02m long. It has a 296bhp 2.0-litre turbocharged petrol engine and 139bhp permanent magnet electric motor in the nose, which are clutched independently onto an eight-speed automatic gearbox, driving all four wheels and with a low-ratio transfer box, which means power can be provided by internal combustion, electric motor or a combination of the two, even heavily off road. For the most part, it will work out which to use itself.

In space beneath the boot is a 19.2kWh battery, which can charge at up to 50kW and allows an 80% charge in half an hour or, on a good domestic charger, a couple of hours. And if you stick it an all-electric EV mode, the official range is 27 miles.

If you want to preserve that range for later – when you get into town from the country - you can select a Hold mode and it’ll reserve its current state of charge.

Or, if you put it in Hybrid mode, it’ll sort itself out and give you its best economy while it winds down the battery charge to nothing, whereupon it’ll behave like any non-pluggable full hybrid.

Whatever the power, the Defender is a big car. It’s 2.1m wide across the mirrors and 1.97m tall, which are all things that make it, in Land Rover speak, a 4x4 rather than an SUV. And with the weight of the batteries, this version weighs 2525kg, around 200kg more than a diesel version, which until now has been the only variant that we’ve been able to drive – and which can tow 3500kg, rather than the plug-in’s 3000kg. But for all of the diesel’s virtues – and we’ve come away well impressed with this 4.5-star road test car – sparkling fuel economy is not one of its strongest points. 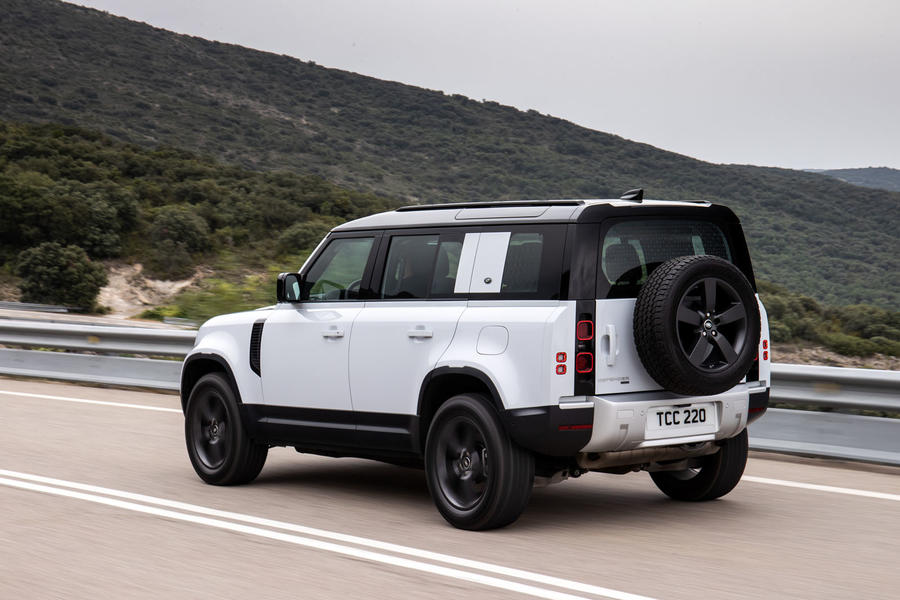 Depending on the use case, that situation changes here. If all your journeys are 20-odd miles, you’d never use any fuel at all, but if that were the case, you probably wouldn’t buy a Defender. No, what the PHEV system allows is a Defender to fit much more comfortably into your life if, like most lives do, there are quiet short mooches at times but also the need to tow a boat or horse or caravan or go to a meeting or visit gran the other end of the country at other times.

Inside, the PHEV is like other Defenders, in that it’s chunky, with big buttons, and has a mostly sensible layout and a decent infotainment whose reliability is yet to be determined. Retro would be the wrong word for the appealing design but there are cues picked up from earlier Defenders, such as the big slab of dashboard and, while old Defenders did have visible screws, they weren’t on the doors nor heavily featured as in this car.

Even before you hit the road, you’re aware it’s wide. As with the original Defender, there’s a big space between driver and front seat passenger that can be filled with a jump seat but, as was never the case with the old car, there’s still a distance from you to the edge of the doors. There’s a vast amount of room in the rear seats, too, but no third-row option in the boot, because the floor there is a touch higher – only by 30mm – to allow the battery to sit beneath it.

The PHEV gets a marked extra button on the dashboard, 'EV', which swaps between those power modes I mentioned. In electric mode it creeps away from standstill just like an automatic would, shifts imperturbably and, if you put your foot sternly enough on the gas past a kickdown notch, the engine will still cut in. With 139bhp of electric power alone, it’s not sprightly but you’ll keep up with most traffic and it’ll stay all-electric up to 81mph. If you get up there and stay there, it won’t give you your full 27 miles.

If you pop the car into Hybrid mode and start with a fully juiced battery, you can expect around 75 miles of mains-assisted driving before it’s depleted. In town and on country roads, where there’s good scope for regeneration, I saw over 65mpg in this state, which for a car of this size and weight is pretty sound.

Don’t expect similar on a motorway, which is where the Defender’s big frontal area comes into play. Because the hybrid system isn’t doing much regeneration and you’re running on the internal combustion engine for the most part, it won’t do much more than 30mpg.

And once that battery is depleted, well, you’re just in a car where the hybrid is still helping a lot in town and country but the 2.0 petrol engine is dragging around 2.6 tonnes, which is too much for it to achieve much over 30mpg. Which is why your use case defines now, more than ever, which model you buy.

One thing to note: a diesel is likely not as good as this PHEV off road (unless weight is your particular enemy). Not only does the electric motor help fill torque gaps on the road, but drive on electric power alone off road and the motor dishes out torque so comfortably that you can go from no power to just a little power to quite bit of power, in really quick and responsive fashion. And it’s nice to mooch around land silently.

Land Rover’s engineers – and they’re not alone, because I’ve heard Jeep’s say it, too – think an electrified future is exciting for off roading. Power could go to whichever wheel you like whenever you like, and while that isn’t entirely the case for this car, it’s a step along the way.

And it feels like a step worth taking other times, too: the PHEV is, on the road, for much of the time a more agreeable car than a diesel.

In town, as often as not, the engine is off, even with the battery range down; and when it does kick in, it makes a distant thrummily appealing sound from quite a distance away. Meanwhile, not too many cars ride this well (air springs are standard), and certainly not while hanging onto their body movements so capably. With a slowish and extremely accurate steering set-up, it’s much more easy to place than its dimensions would suggest, too.

I still wish it was smaller, but as big cars go, it’s much easier to place than, say, a Volvo XC90. And maybe its size is an inevitability. While our roads are great for chassis development and Land Rover is a British company, other markets want 4x4s that are bigger – so we’ll just have to live with it. But you wouldn’t want it any bigger than this in the UK. 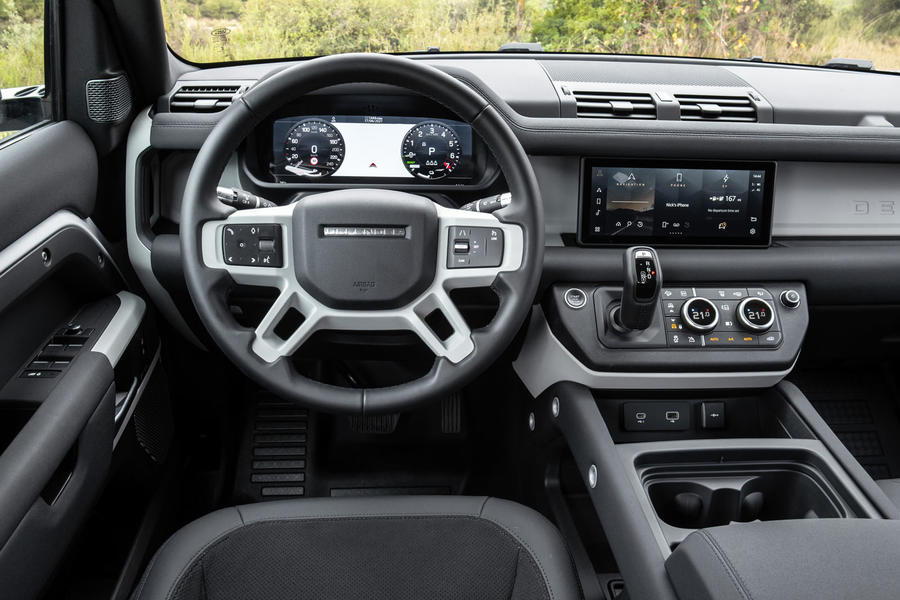 Given the comfort, quietness, capability and reduced consumption (in the right use case), the Defender PHEV answers a lot of questions. If your life involves the mix that so many of ours do – plenty of shorter journeys, with infrequent long ones – it’s a low-consumption alternative.

If you do a lot of motorway miles, particularly with something hanging onto the back of it, a diesel engine is still your best answer. And in rural extremes, it almost certainly is. But the Defender has moulded itself deftly to fit a certain market. And it’s still the most capable big 4x4 while it’s at it. 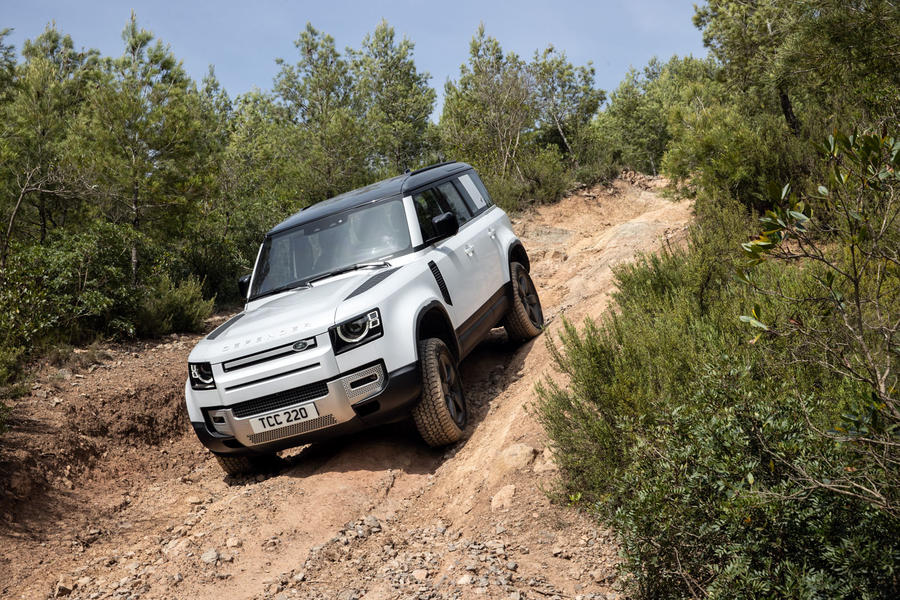 Log in or register to post comments
geed 10 September 2021
A Defender owner claiming a Defender is "the most capable big 4x4" LOL! Comical comment. That must be why they are often found in the most arid hostile terrains in the world...NOT! Such bold claims need to be backed up with empirical, thorough testing against its competitors. 200 series Landcruiser, Y62 Nissan Patrol, Jeep Wrangler Rubicon. It may stand a chance if it does not break. Pointless vehicles in the UK....all of them. Of course Nissan and Toyota know this and do not sell their big full size 4wd's in the UK anymore. UK prefer road biased soft roaders like the Defender.
geed 9 September 2021
Jeep, Toyota and Nissan all make more capable 4wd's than the Defender, with its contrived jerky electronic biased traction control system.
rob26 15 July 2021