From £40,4009
Does a more compact three-door bodystyle make for a better Defender than a longer five-door? We find out with a first drive on UK roads
Open gallery
Close

When Land Rover launched the new Defender, it was easy enough to understand why the company majored first on the longer-wheelbase 110 versions, but it was still a disappointment given that, as its own designers have often pointed out, the shorter 90 carries the iconic shape.

Now the 90 has landed at last, held up for a while by Covid and still subject to about a three-month delivery delay, it’s possible to see how different – and similar – it really is to the longer model, about which we’ve already written extensively. It’s quite clearly a modular car: the monocoque chassis, suspension, steering and powertrain packages are all closely related.

The interest lies in the effect carving 20in out of the wheelbase has on stuff like kerb weight, handling and ride, and accommodation – and we took the opportunity to try the new model in P400 mild-hybrid guise, given it’s the highest-performing Defender 90 of all.

The weights are surprisingly close. A shorter model weighs only 65kg less than a similar-spec 110, although that advantage nearly doubles (to 120kg) if your 110 is equipped with third-row seating. Rear accommodation is near-as-dammit identical for space and comfort to a 110’s second row, but the 90’s obvious disadvantage, as a three-door, is that it’s much harder for rear passengers to access and – at least in our privacy-glazed test car – it seemed pretty dark back there. The wide-opening rear door is a boon, though, just as it is on the 110, and carrying capacity is massively larger than the old model’s.

The P400 3.0-litre straight-six petrol twin-turbo engine fitted to our test car makes it the most powerful and fastest-accelerating production Defender available. It turns in a 0-62mph time of 6.0sec, with an accompanying top speed of 120mph. Understandably, perhaps, WLTP combined fuel consumption is unimpressive, at 25mpg, and neither does the Defender 90’s CO2 output – 256g/km – pull up any trees. 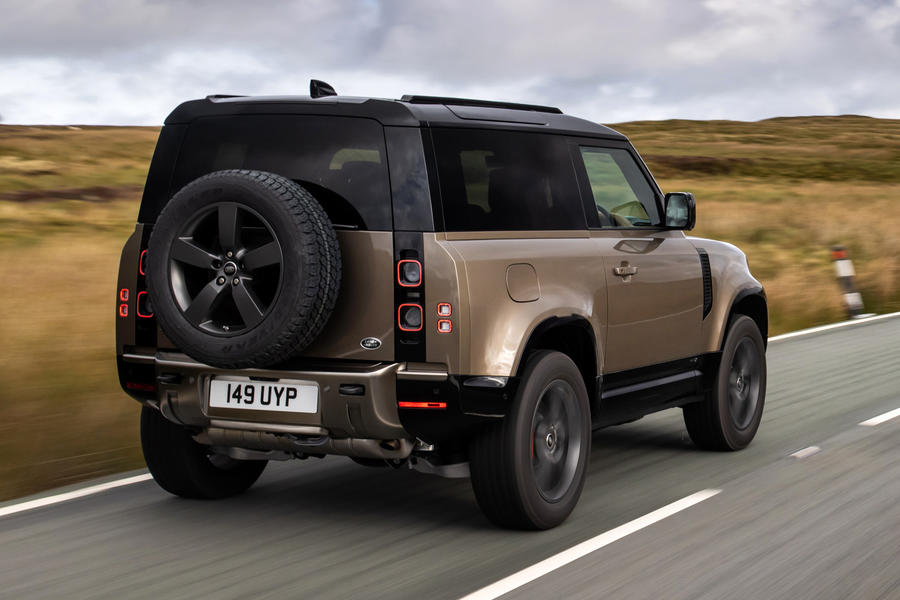 Like a fast-growing number of Jaguar Land Rover engines, the P400 uses an integrated starter-generator (ISG) to harvest braking energy and deploy it on acceleration, but it fails to turn this model into an economy machine.

Still, the 3.0-litre straight-six engine – the latest in what is now a modular family of three made in JLR’s Ingenium engine plant near Wolverhampton – is the embodiment of smoothness and quietness, and produces copious amounts of torque from low down in the rev range, even though it will also rev smoothly to 6500rpm. Not that it’s likely to spend much time turning so hard: the generous torque peak is produced from 2000rpm and, with eight ratios available in the automatic gearbox, it never needs to rev hard.

When you drive, three effects are soon obvious. One is agility: the shorter car naturally turns tighter and with more alacrity. Second, as a result of its shorter wheelbase – and possibly the extra weight of a six-cylinder engine in the nose – there is a little more nosedive under braking and squat under acceleration than you’d notice at similar velocities in a 110. It’s no big deal, a curiosity rather than a fault.

And besides, you wouldn’t want anyone stiffening the natural rates of the 90 X’s height-adjustable air springs because that might negate one of this machine’s major strengths on and off road: its excellent ride quality. Not only does it largely obliterate ruts, but it also does the job almost as quietly as a luxury saloon would do. That refinement adds enormously to the appeal of the Defender 90, especially since the chassis rigidity and solidity are obvious and reassuring.

We weren’t able to do any serious off-road driving in the P400 X but we did tackle some rugged stuff at Eastnor Castle in a much lower-spec four-cylinder 90 D300 – which lacked this test car’s height-adjustable springs – and it became perfectly clear that this lower-spec 90 could handle obstacles that would have humbled its predecessor. 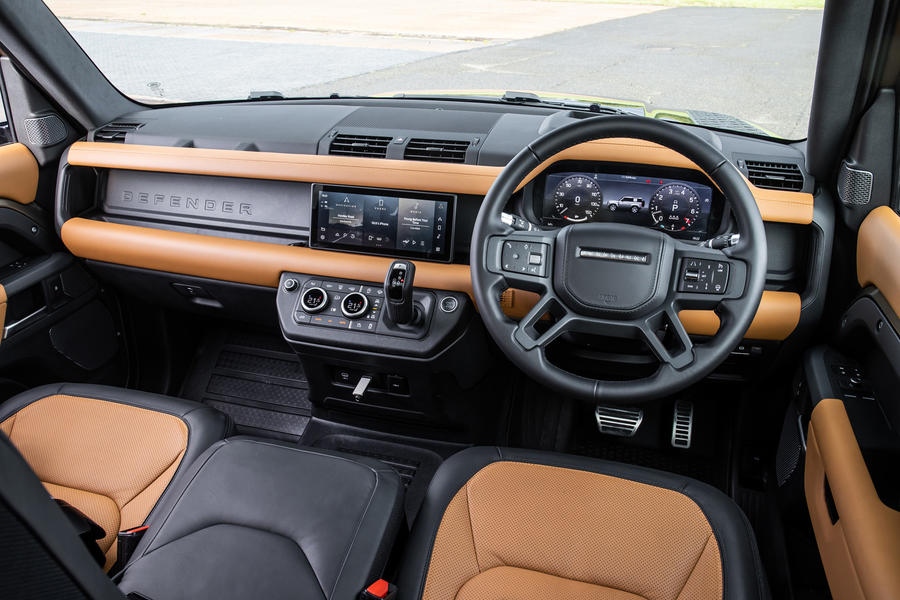 It’s rather likely that in most owners’ hands, the P400 X – what with its elaborate and rather luxurious equipment, its impressive on-road high-performance capability and its rather eye-watering £77,400 price – won’t be required to do very much serious off-roading.

However, our experience with the lesser D300, pricey enough for many at around £45,000, suggests that the P400 could most certainly cope if required. Probably better. As it is, it’s extremely appealing on-road transport, too. Which is to say that the breadth of capability that was built into Land Rovers from the very first has not just been maintained: it has been greatly extended. 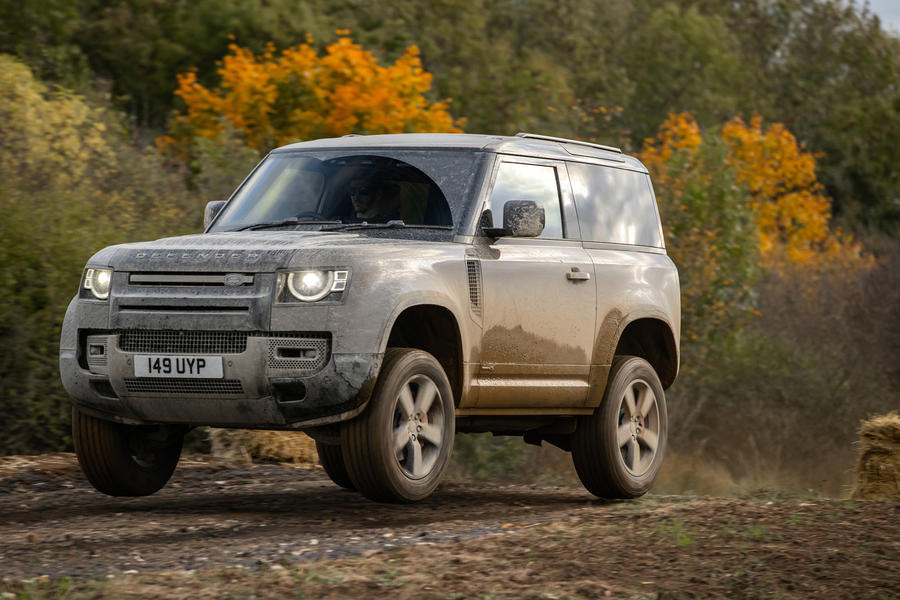 Bought by the self obsessed. What possible purpose does this car have that you couldn't do in a Focus?

Its designed for and marketed around a task it will never perform. Instead it'll sit in car parks on tarmac outside pubs. The Evoque and Velar buyers are shallow and vain but at least the car performs a function - luxury. Defender buyers want to think they're Bear Grhylls. £77k to play let's pretend.

Who are we comparing JLR for

Who are we comparing JLR for reliability here to? Jeep and the big German 3 aren't far ahead, in fact I think Jeep is on some models behind. Toyota is way ahead of everyone but it makes undesirable cars e.g the Land Cruiser which no one buys in the UK or the US anymore because it's an outdated car.

I think it is important to look at reliability. But lets also consider desirability. Do you really want to be seen dead in any Japanese branded car these days? Why don't people buy a Lexus? Why is Jeeps off-road capability shunned by UK buyers? When you get down to it people aren't buying on just reliability these days. If they did Tesla would be the worst performing brand in the world!

Really I'd love an article on here regarding why Honda failed (for example). The made reliable cars, but only granddad bought them. See my point here? If we are going to give JLR a bashing on reliability then we'd better attack Japanese brands for being dull

doesn't hit you in your wallet at the end of the warranty period.

And Honda are not considered as just for OAPs outside badge conscious UK, the land of Hyacinth Bucket types who would ruin their finances for the chance of a JLR or Audi on the drive.

Ah but... you are forgetting PCP!

Most German brands are run from new in this country via lease plans and it's the second owner that takes the hit!

Believe me, from experience, German brands are not the paragon of reliability that their marketing machine attests to. By the time the second owner comes along all the glitches have been sorted under warranty, the first owner doesn't give a stuff because it was a company car and not his/her problem

We have run various makers cars in our fleet.

Citroen Vans.. Do what they say on the tin

Porsche... VW in a posh frock and prone to engine management glitches

Skoda... VW in a cheap frock but more reliable than the Porsche (never understood that one!)

Mercedes E-Klasse... all fart and no poo (as a former colleague once described them!)

I can't imagine many people

I can't imagine many people going for such highly specced Defender 90s, that seems a very niche version to test