With the brains and brawn of Nissan behind it, Infiniti has always had the potential, on paper at least, to be a class-leading manufacturer. However, despite maintaining its presence in the UK for over eight years, Infiniti has categorically failed to make an impact in the premium car sector – I mean, when was the last time you saw one in the wild? Exactly.

Ultimately, Nissan’s luxury sub-brand has long been in need of something special; a car to lure buyers away from the diverse range of accomplished, but in most cases, rather staid European competitors. Something, Infiniti hopes, its new range-topping Q50 3.0t will be able to achieve.

On first inspection, things are off to a positive start, thanks to some handsome exterior styling. Granted, the gaping grill and swooping lines won’t be to everyone’s tastes, but next to our long term BMW 3 Series and Audi A4 it’s undoubtedly a striking design. And unlike previous Q50s, it’s no longer all show and no go.

Under the bonnet sits an all-new 3.0-litre V6 twin-turbo engine, a motor belonging to the new VR family that replaces Nissan’s highly regarded VX engine, as used by the 370Z, among others. With a new direct injection system and revised turbochargers, the high-output version (the Middle-East gets a restricted unit) certainly doesn’t want for power, delivering 395bhp at 6,400 rpm and 350lb ft of torque between 1,600-5,200rpm. 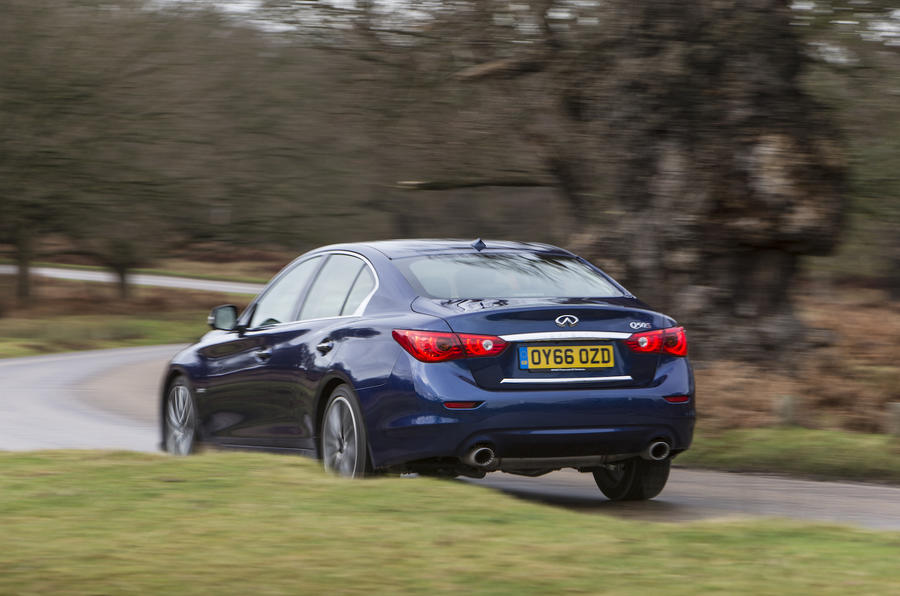 It doesn’t take long to discover that Infiniti’s all-new turbocharged six-cylinder is something truly special. Flex your right foot and with minimal lag from the turbos a solid surge of thrust rapidly emerges, overwhelming the rear tyres’ at anything below 50mph. Consequently, we found ourselves using a gear higher than usual, revelling in the engine’s prodigious levels of torque.

That’s not to say it won’t rev when asked. If you can get it hooked up (made all the more difficult thanks to the absence of a proper limited-slip differential) the V6 pulls strongly through the entirety of the rev-range, building to a R35 GT-R-like crescendo at 7000rpm. It’s a genuine monster of a powerplant, and feels every bit as characterful as comparable offerings from BMW and Mercedes.

That said, despite the impressive tractability of the engine, it’s hard not to become frustrated with the hesitancy of the seven-speed gearbox. Left in standard mode it hunts around and shows a general reluctance to drop down when driving in town. Optional magnesium flappy paddles allow for greater control over the ‘box, but even in Sport Plus shifts are slow and haphazard. 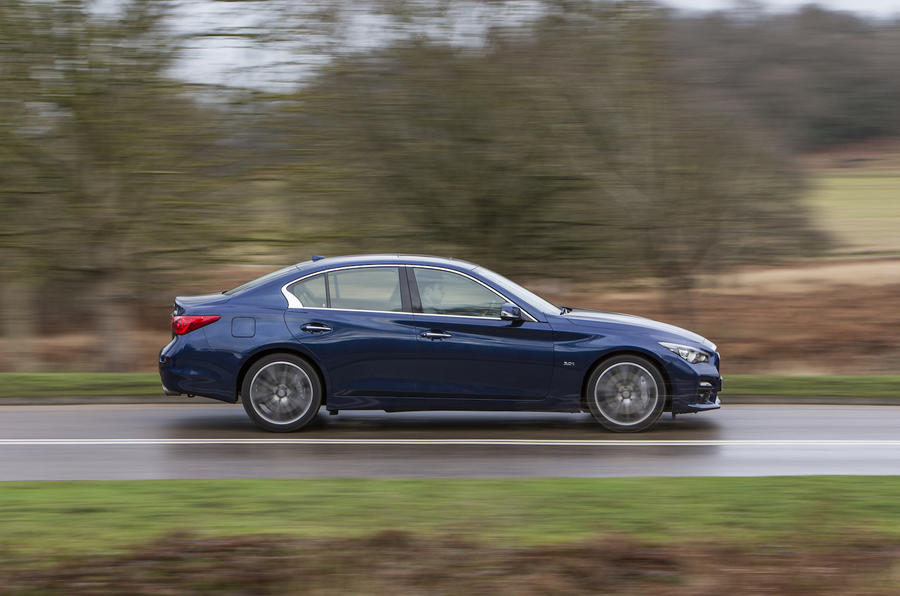 The Q60’s 19in alloy wheels and standard-fit run-flat tyres contribute to a firmer ride than most of its rivals, but the digital dynamic suspension does a commendable job of taking the sting out of larger intrusions. Surprisingly, the chassis also improves as your speed increases, demonstrating good body control, a predictable balance and reasonable levels of adhesion.

It’s a setup that would be all the more enjoyable if not for Infiniti’s newly revised ‘DAS’ active steering set-up. Essentially, the system removes the direct connection between steering wheel and steered axle for what its maker claims is smoother steering. However, smoother does not necessarily equal better, as we quickly found out.

Regardless of the surface, be it pothole-ridden city streets or rutted B-roads, the system provides virtually no feedback through the rim. Now, we admit, most electric steering systems currently on the market offer limited communication, but what sets the Infiniti unit apart as a truly flawed system is the changeable torque loads transmitted through the wheel. When driving fast, the ‘mock’ feedback feels simply unpredictable and robs the driver of any real confidence. Not ideal in a range-topping sports saloon. 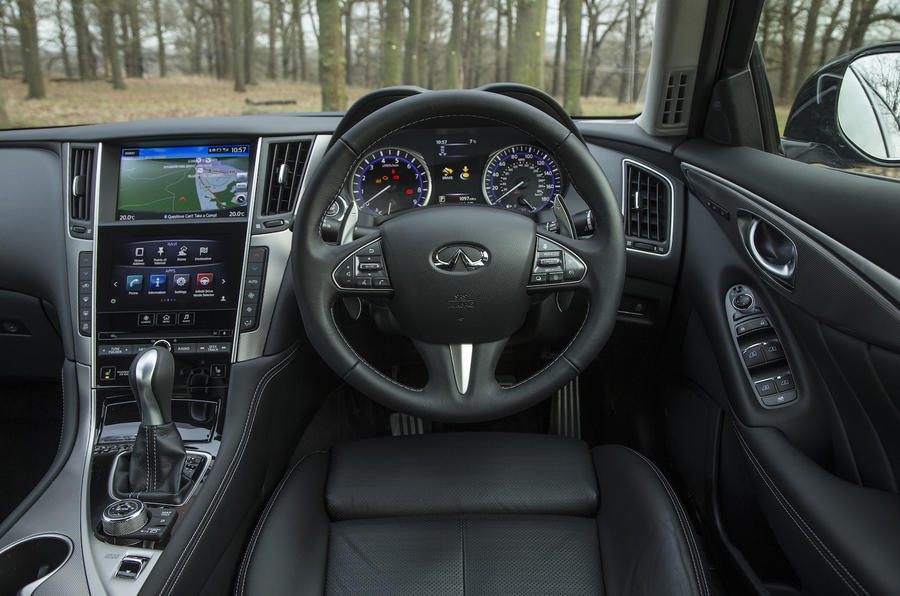 The Q50 3.0t is a curious proposition. It has a characterful engine, an adjustable chassis and striking aesthetics. But, once again, Infiniti has managed to miss the mark.

For a car approaching £50,000, the ageing infotainment system, flimsy switchgear and lack of rear headroom looks embarrassingly poor next to the impeccable quality of the German contenders. And the hesitant transmission and needlessly complicated steering corrupt what is otherwise a dynamically composed car.

We’d love to recommend it as a leftfield alternative to the straight-laced German mainstream, but it would need to be a much better drive to get our vote.

I am car enthusiast and rather test cars myself than I believe what is written in reviews. I can't help myself but reading each Infiniti review in Autocar allways it has low review rating. For example interior design and quality. You wrote it is not pair to german premium A4, Beemer 3 this is not correct at all to lie to those who never sat in those cars. New A4 door panels are very cheap looking and Beemer 3 dashboard quality wise belongs to 80es. Q50 interior balance posh design with very high quality of materials. I think Infiniti cannot have high rating because it does not complies with very sober pragmatic british taste. But car is good when it has soul. No german car has a soul. They are good as a slave and that is it. Q50 has a soul for sure.
DVB78 18 January 2017

I agree with your comments Das auto.
Most magazines rave about Audi for example, yet nearly all their cars are soulless and fairly boring to drive. Its only their interiors that set them apart!
geed 23 September 2017

I agree with your comments Das auto. Most magazines rave about Audi for example, yet nearly all their cars are soulless and fairly boring to drive. Its only their interiors that set them apart!

You vould also add half a star to a flawed autocar reviewed car if it had an alsfa badge on it.....thats the onlt time an autocar jounalist sees character as an asset rather than a flaw.

Got to say though I admire Infiniti for trying new technology but to implement it on their manstream car whilst trying to build the brand is a deeply flawed strategy.

Have to say though surprised that the Q30 is not more popular.....says more about the british buying public and the british motoring press' influence on them that the car itself.

I never understand how some manufacturers can get it so wrong.

We don't all cars to be like BMW's, but serious failings in steering, etc are likely to be accepted by few. Does it mean that thier engineers said " that's it, absolutely perfect, we've nailed it"? Or do they know it's sub par, but put it out anyway?

And I must say that interior doesn't really look inviting to me. Looks are always subjective of course, but looking like a Nissan Sunny inside isn't going to help...

The only infinity worth looking at for me is the Q30, interestingly styled, nice inside, a sales disaster, and therefore quite cheap soon...

This time of year

No reasonably powerful 2wd gets traction. Would be good to get a threshold but all the 3.0 2wd bms and jags I've had have traction control intervening in winter on surprisingly little throttle. It's surface dependant as well as temperature.
.
View all comments (4)