From £16,5467
Share review
Hyundai's family car has been reworked into a five-door coupé - and promises added dynamism as well as some extra boot space
Share
Open gallery
Close

There are better examples than the i30 Fastback of the Hyundai Motor Group’s reinvention from purveyors of well-built, well-warrantied and, well, decent but not exceptional cars to a bold, ambitious rival of big European firms.

You could look at the Volkswagen Golf-baiting i30N hot hatch or the BMW-bothering Kia Stinger executive GT. Next to those, an i30 hatchback that – to describe it uncharitably – has had its roof squished and rear stretched a bit doesn’t seem all that radical.

Still, even if Hyundai’s marketing talk of how the i30 Fastback is bringing premium five-door coupé styling – as seen on the likes of the Audi A5 Sportback – to the mass market is somewhat exaggerated, the fact that the Korean firm is considering the category at all is a sign of its boldness. After all, in the mid-sized family car market, the i30’s existing hatchback and estate forms are likely to remain the most popular.

We’ve already driven the i30 Fastback with the 137bhp 1.4-litre T-GDi petrol engine in Spain, but this is our first taste of it on UK roads. It’s also our first taste of the car fitted with Hyundai’s seven-speed dual-clutch DSG gearbox. 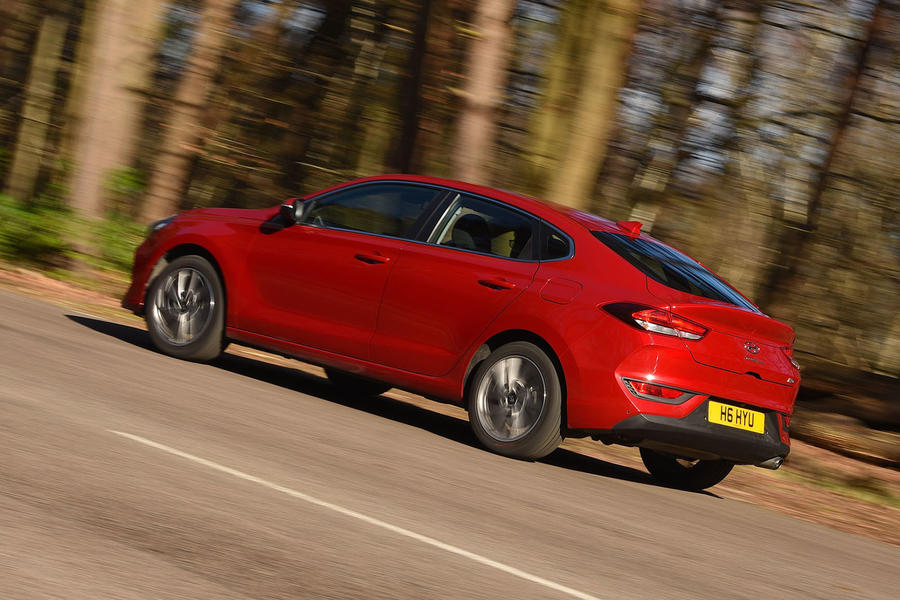 Much like the hatch version, the i30 Fastback is perfectly pleasant to look at, if not exactly a styling revolution. Still, that revised rear end – it’s 115mm longer than the hatch, with wrap-around rear lights – has its charms, especially when combined with the slightly longer nose and lower front grille. Our test car ran on 18in wheels (it also comes with 17in wheels).

The exterior work ensures the i30 Fastback has a style of its own, although it’s clear that it’s a reworked version of a hatch. That mild makeover doesn’t continue inside; it’s exactly as you’d find in any other i30. It’s well laid out and comfortable, if not particularly exciting. Still, everything feels practical and solidly built.

It’s worth noting that the i30 Fastback slightly increases the capacity of the boot, and Hyundai has bundled in plenty of technology and driver assistance features. Our £23,440 Premium test car included safety features such as autonomous emergency braking, blindspot detection and lane departure warning. It also came with an 8.0in touchscreen, wireless phone-charger and plenty of USB charging points and sockets. Much like the non-Fastback i30, really.

Under the metal, the i30 Fastback has received a bit more work, with a slightly lower chassis and slightly stiffer suspension than the hatch. It’s not enough to turn the natural and stable i30 into a truly dynamic sports coupé, but it is an agile steer that’s pleasantly responsive.

That slight stiffening of the suspension hasn’t come at the expense of ride quality on Britain’s roads; our test car was unruffled on city streets and country lanes, and coped fine when munching motorway miles.

As we found on our first test, the 1.4-litre petrol unit is a pleasantly refined cruiser and, with 179lb ft of torque from 1500rpm, has accessible – if unspectacular – performance.

Somewhat less convincing was the DSG gearbox. At speed, it was fine and suited the car’s relaxed character. But it was less convincing during city driving; in stop-start traffic, we were occasionally left with little to no accelerative drive due to its over-eagerness to change up gear and reluctance to drop back down through the 'box. Unless you’re set on an automatic, we’d lean towards the six-speed manual 'box. 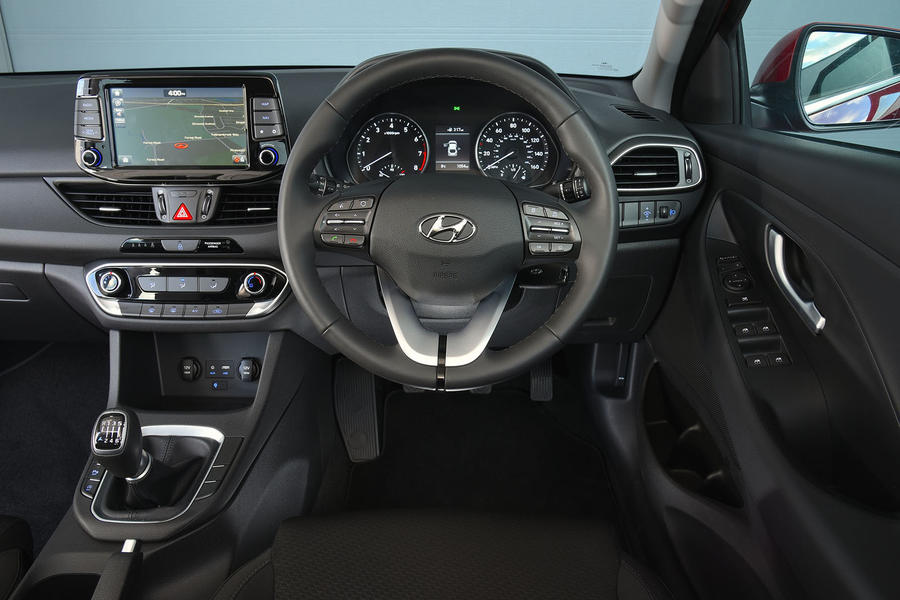 In a way, it’s a compliment to Hyundai’s developing boldness that identifying likely buyers for the i30 Fastback is a little difficult. It’s more dynamic than the hatchback sibling, but unlikely to appeal to those seeking a really sporty coupé.

Yet, there is a decent amount of appeal here: it’s practical, decent to drive, well built and well priced compared with the hatch version. In the same way the Audi A3 Sportback has found itself an audience, those seeking a slightly alternate family car would find plenty of positives here. 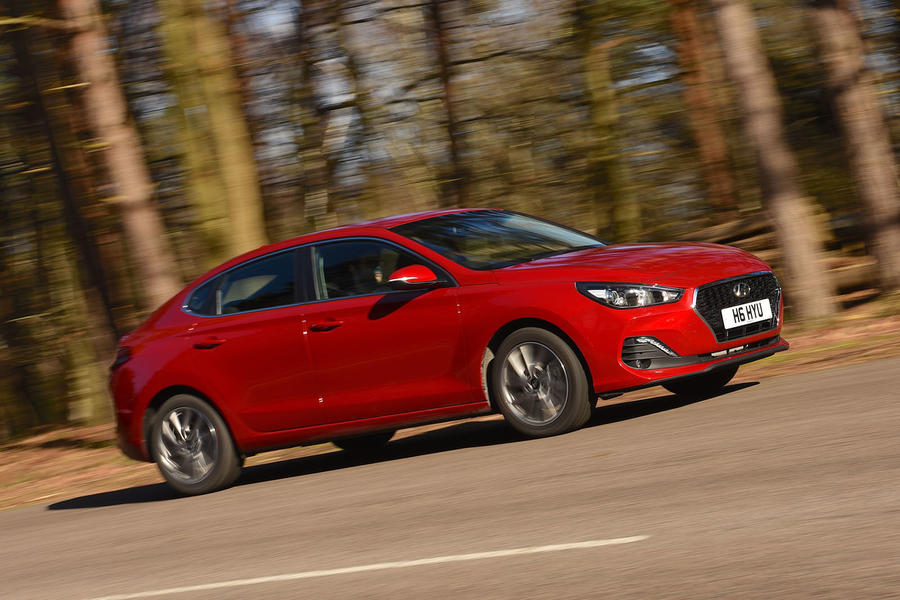 Isnt this just a Skoda Rapid

Isnt this just a Skoda Rapid alternative, with a much more optimistic price tag?

Anyone caiught using the terms i30 and coupe together needs their knuckles rapping. The next one of these i see will probably be a taxi

Not a Skoda Rapid

The Skoda Rapid is built on a stretched version of the old Polo platform (or was it the one before last), so it is much less sophisticated, and much narrower.

I like it and have always preferred this type of hatch back as opposed to the estate style vertical hatch, though they were never called fastbacks in the  past.

Seems strange that this is the model that is meant to be more dynamic yet the N version was released as a standard hatch, if they'd released the N as a fastback it would be the halo model for this supposedly more dynamic model.

...although the Rapid (btw, what a silly name for such a bland-modest car for *normalos*) is more a... hatch-break chimaera / gargouille somehow, gaining without efforts the crown of the fuglyiest compact motorized-ducks.

Anyway, by associating the i30 badge with words like *Premium* - man, what a barbarism... I hate this pseudo-attribute -- Hyundai is trying to mesmerize some gullible clients, seduced by the idea of buying something wannabe luxurious, for a little plus over the popular hatch-money.

Nevertheless, the i30 basis (more dynamic than this heavier Fastback, btw, and NOT the contrary, as Autocar wrongly claims) is very reliable, but without the usual Hyundai discounts the price-list is unacceptable high nowadays.

Anyway, by associating the i30 badge with words like *Premium* - man, what a barbarism... I hate this pseudo-attribute -- Hyundai is trying to mesmerize some gullible clients, seduced by the idea of buying something wannabe luxurious, for a little plus over the popular hatch-money.

Is this any different from VW/Audi/Merc/BMW though these days? Genuine question, given how these companies hatches are now residents in the top ten sellers.

This is certainly not a coupe though. The rear three quarter view bears more than a passing resemblance to the Merc GLC Coupe!