From £17,4057
Mild-hybrid engines arrive as part of facelift for family hatchback. We test it in the UK for the first time
Open gallery
Close

Although a competent and fuss-free device, the Hyundai i30 has always lacked the driving zest and design elan of the best family hatchbacks, so Hyundai is pinning its hopes for this mid-life refresh, which runs to some visual nip-and-tuck, a range of hybridised engines and a whole host of technology upgrades.

At the heart of the changes are the revised and electrically enhanced engines, a pair of petrols and a diesel. Making up the bulk of sales will be the same turbocharged 1.0-litre triple already seen in the smaller Hyundai i20, although here it delivers 118bhp. There’s also a new 158bhp 1.5-litre, which is available exclusively in the coupé-styled Hyundai i30 Fastback.

Both are fitted with 48V starter-generator technology and are available with Hyundai's six-speed Intelligent Manual Gearbox. This smart transmission does away with traditional hydraulic actuation in favour of a drive-by-wire electromechanical set-up that allows the computers to decouple engine and gearbox for some fuel-saving coasting on a closed throttle.

Externally, there's a reprofiled nose with new LED headlights and daytime running signatures that have more than a hint of Seat Leon about them. The tail-lights have also been given the LED treatment, while a new rear bumper looks sharper and is claimed to have improved aerodynamic properties.

Inside, the i30 is much the same as before. There are some new air vents, while the instrument cluster now features a TFT screen that’s flanked by traditional analogue dials for the rev counter and fuel gauge. There’s also a new, slick-looking 12.3in infotainment touchscreen on top of the dashboard, offering Apple CarPlay, Android Auto and numerous connected services, for which Hyundai throws in a five-year subscription.

Hyundai has also updated and extended the scope of its Smart Sense safety kit for the i30, adding acronyms in the form of Lane Following Assist, Rear Collision-Avoidance Assist and Leading Vehicle Departure Alert, which chimes an alarm when the car ahead moves off and you remain stationary for more than a few seconds. 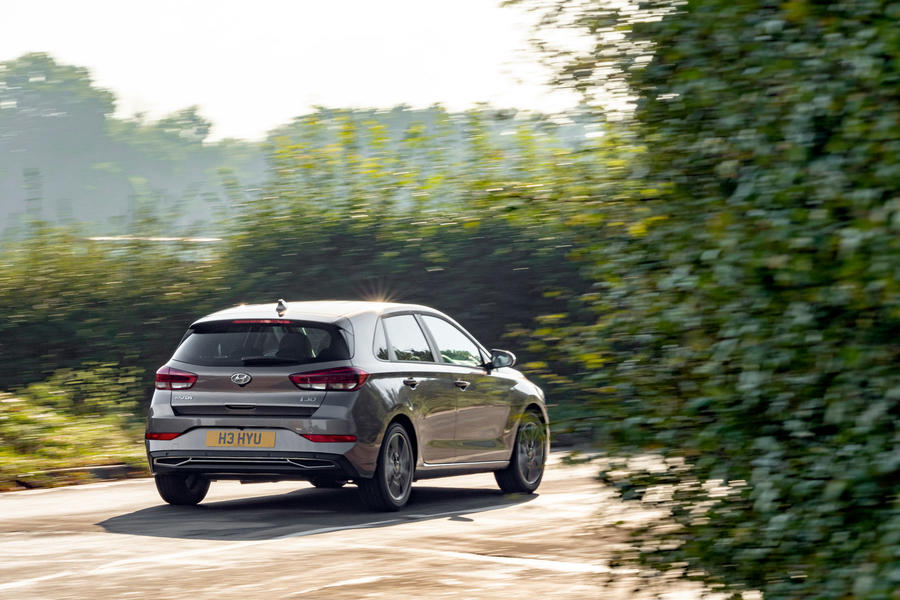 This is a fairly minor update, so the differences between this i30 and its predecessor are fairly minor. It’s still a car that majors on competence and ease-of-use, taking the sting out of the everyday driving grind but never adding enough sparkle to deliver any grins when the road ahead turns interesting.

That said, the adoption of the 48V mild-hybrid 1.0-litre engine is a definite boon, the well-integrated 16bhp starter-generator giving a little fillip of torque-fill at low speeds to give the car a bigger-hearted feel than its 998cc capacity would suggest.

It’s brisk, rather than quick, but the i30 never feels out of its depth and can happily go with the flow without resorting to frequent forays to the tachometer's 7000rpm war paint. Even in tall-striding sixth gear, there’s enough pick-up for regaining speed if you’re baulked on the motorway; there’s a useful 127lb ft of torque from just 1500rpm.

There’s the typical three-cylinder thrum, but it’s fairly muted, and the engine spins smoothly enough even if the hefty, balancing flywheel effect means it doesn’t gain or lose revs as quickly as you would like. Still, that neat drive-by-wire manual works effectively, allowing for smooth changes despite a sticky shift action. Its party trick is the ability to automatically disengage the drive on a closed throttle, allowing the i30 to coast, engine on or off, to save fuel. Squeeze the throttle and drive is smoothly taken up again.

In combination with the 48V system, Hyundai claims the gearbox brings efficiency gains somewhere in the order of 4%. That's marginal, of course, but there’s no doubting that the system operates effectively and unobtrusively enough.

Elsewhere, the i30 is as before, which means it's an easygoing and composed partner, but not one that’s going to be flooding your system with dopamine everytime you hit the road. This smaller-engined car has a torsion-beam rear axle rather than the multi-link affair of the diesel and more powerful petrol (all have a MacPherson-strut front end), but exposure to both reveals that there’s little in it for agility and engagement.

The steering is surprisingly meaty (there are driving modes, but their effect on throttle response and steering heft is only slight) and it’s direct enough, helping the i30 respond crisply to your inputs and string together corners with real fluency. However, it lacks the crucial final points of poise and polish that mark out the Ford Focus and Volkswagen Golf. It can be hustled surprisingly hard and will cling on gamely, but there are no tactile rewards for doing so.

As before the ride is just on the acceptable side of firm, occupants being jostled a little by some low speed resistance in the springing and damping. It improves the faster you go and as the loads increase. It’s fairly quiet, too, combining with the relatively low wind and engine noise to make the i30 a relaxing long-distance express.

Niggles? Well, the new safety systems are welcome, but the Lane Following Assist is rather erratic in its operation. Sometimes it will almost tug the wheel out of your hand in its efforts to avoid crossing the white lines, other times it will totally ignore them and allow you to drift over as far as you like. Happily, just one long press of a steering wheel-mounted button is all it takes to disengage it. There are no multiple sub menus to navigate here; Volkswagen, take note. 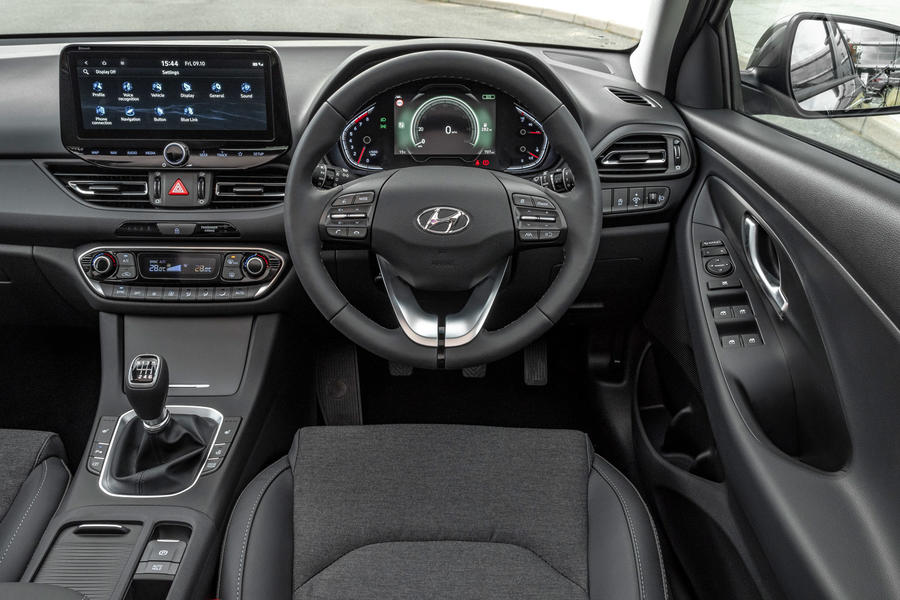 The case for the i30 remains largely unchanged, which means it’s spacious, comfortable and well-equipped family hatchback that’s easy to live with, steers capably enough and is attractively priced. It’s enhanced infotainment looks great and simple to use, while in this day and age, such a smorgasbord of safety systems isn't to be sniffed at, even if some of their calibration could do with fine-tuning.

Yet as before there’s nothing here to get excited by, trick clutch and electrically augmented engine aside. For many the lengthy kit list, generous warranty and spacious, versatile interior will be enough, and the fact that it feels as composed as it does will be an added bonus.

The i30 is a likeable and sensible car, then, but if you want something that can reward and entertain as well as doing all the usual workaday stuff, then the Focus, Golf and Mazda 3 should be ahead of it on your list. 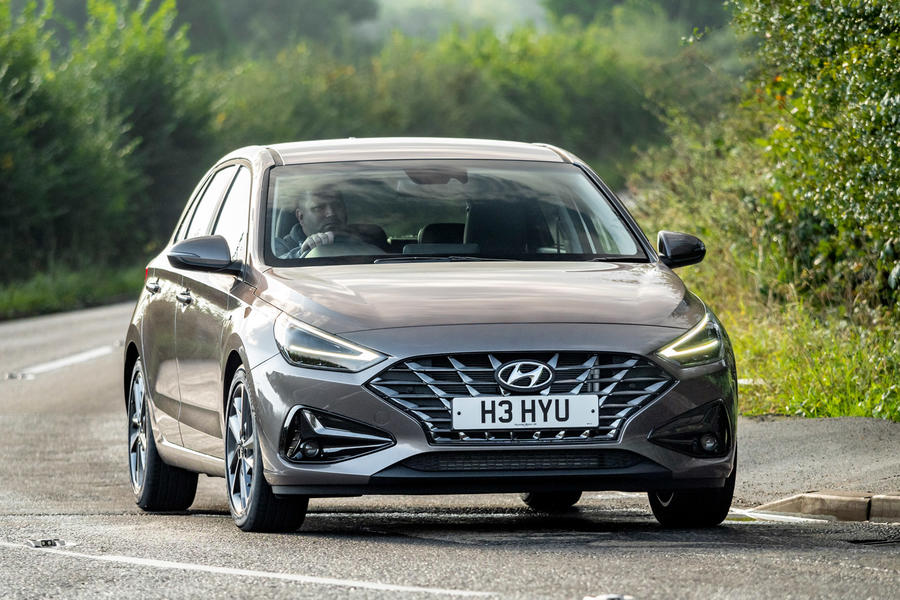