‘S-bend ahead’, warns the instrument binnacle on the Hyundai i20 N.

Sigh. In the era of assertive, borderline bolshy electronic driver aids, there are more patronising interventions than this, but still. It is necessary for the sat-nav to tell the dashboard to tell me that the road is about to go one way, then t’other?

Except this is no warning, as the next line reveals. ‘Press OK for N mode’. Now, this is more like it. Because in prompting you to select N mode, the car doesn’t want you to slow down. Instead, it wants you to say yes to sharper throttle response, a more meaty exhaust note, less prohibitive ESP, and to less assisted steering. If anything, it wants you to speed up.

Welcome to the Hyundai i20 N. Here in Britain, it’s only the second N Performance product after the very-good-from-out-of-nowhere Hyundai i30 N of 2017, and is probably the stiffest competition for the current Ford Fiesta ST yet, which is saying something. Hyundai will begin taking orders in May and deliveries will start not long after that, with but one trim level offered at a price that just should sneak under £25,000.

Is that expensive? Well, yes, but ultimately no. With the VW Golf GTI-rivalling i30 N, Hyundai offered the car in two variants, but the less powerful version, which went without the limited-slip differential, active exhaust or several cabin extras, sold in paltry numbers. Most people bought the i30 N Performance Package, and so over here the i20 N now comes only with the full works – with everything from custom Pirelli P Zero tyres to heated rear seats, and plenty more. In short, it's overflowing with standard kit.

More fundamentally, the car’s five-door shell has been reinforced in no fewer than 12 places compared with the regular Hyundai i20. Where you’re dealing with volume sellers, such modifications are not an easy or inexpensive endeavour, and need to be accounted for in the price. The rest of mechanical specification is hardly underwhelming, either. The 1.6-litre ‘Gamma II’ four-cylinder turbo engine makes 201bhp and 207lb ft, which gives the i20 N a superior power-to-weight ratio than the Fiesta ST, if only by 3bhp per tonne. It’s mated with a six-speed manual gearbox replete with rev-matching function, and drives the front wheels alone through an electromechanical limited-slip differential. So all quite serious.

Suspension-wise, this being a supermini rather than a senior hot hatch, the new spring and damper set-up is then passive, not adaptive, but the changes from the regular i20 are myriad. Alongside the spiced-up geometry, for the MacPherson struts at the front the top mounts and knuckle have been reinforced. The rear torsion beam has also been beefed up, while the red-caliper’d front brake discs are 40mm wider in diameter compared with those of the i20.

Now, the exterior. Punchy, isn’t it? Let’s just say that despite its diminutive size, you’re unlikely to lose the i20 N in the car park of your local supermarket. Or indeed on a moonless, mist-shrouded night in the depths of Heathrow’s county-sized Long Stay.

There is the roof-mounted wing (not a spoiler, note, but a proper wing), red pinstripes that run the circumference of the bodywork, an unapologetic diffuser, and sardonic headlights that merge into a glossy grille that, if you look very closely, you’ll see is comprehensively open-worked, to better feed the hulking great intercooler that lurks behind.

You might like the madcap appearance of i20 N. Many will not, especially compared with the handsomely understated Fiesta ST. Personally, I think having a fully fledged and hugely successful Hyundai World Rally Championship operation, of which an i20-branded machine is the four-wheeled star of the show, gives you licence to do whatever the hell you want. 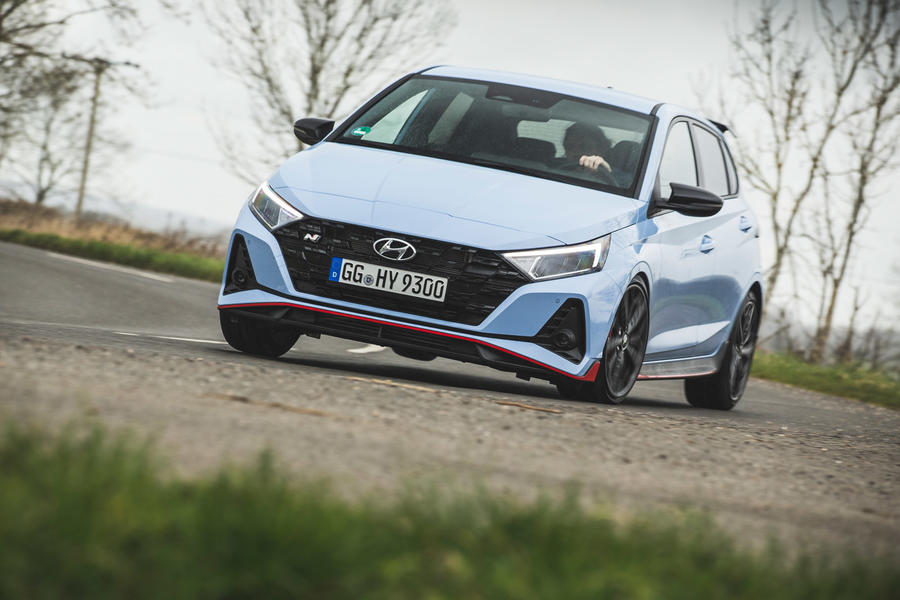 In any case, the cabin is very different, because straight away it feels grown up, yet far from boring. The bucket seats, with their stitched leather bolsters and matching head pads, are superb. Not as figure-hugging as the Recaros in the Fiesta ST, but still very supportive and probably more comfortable over distance. With its modest diameter and firm contouring, the steering wheel is then something you’d be happy to have in a sports coupé costing more than twice as much as the i20 N.

What’s also impressive is how well hidden the hard plastics are. And while it’s a little monotone in here, there is some textural variation in the dash that, along with the sharp digital displays (instrument binnacle included) and snippets of blue trim, keep the cockpit feeling more vibrant than that of the Ford or the Toyota GR Yaris, if still some way short of having the personality you’d find in a Mini Cooper S.

What really matters is that the driving position is good. It is perched, as with everything in this class, but is nicely aligned and has generous adjustability in the steering column. So you hit the engine start button, note the loud, deadpan burble of the exhaust, feed in the reinforced clutch via a pedal that’s weighty enough to have some intent about it but not so heavy that it’s bound to become tiring in town, and you’re away.

We only have 90 minutes with this LHD-market car, so don’t spend much time pootling. Suffice to say that the i20 N’s suspension is quite pliant at low speeds, and progress at a canter decently refined by the class standards. There’s an underlying robustness, sure, but nothing of the bone-clattering rigidity you used to experience with the Cup-chassis’d Renault Sport Clios, and there’s also less reactivity than you’d get from the current Fiesta ST. Contrary to what the exterior suggests, you could live with this set-up, happily.

However, on any half-decent road, you should just do as the car tells you: go into N mode, by pushing the juicy blue button nestled up next to the airbag cover. One press gives you Hyundai’s standard dynamic presets, while two will bring up your own preferences. It’s a little overwhelming at first, because you can programme engine response (three settings), steering weight (three), ESC leniency (three, including fully off), the rev-matching function (three, amazingly) and the grenade factor for the exhaust (you guessed it).

There's even a driveline option for left-foot braking. Normally the ECU would drop torque output while the brake pedal is depressed, in order to avoid damaging the engine, but if the ESC is fully off, this measure is disabled.

Today, we have everything ramped up, except for the steering, which is in the medium setting, and the rev-matching, because the i20 N’s pedals are positioned almost perfectly for you to do it yourself. And, actually, the ESP, which is set to midway Sport. Owners might also think twice about having the exhaust at maximum attack while driving along local routes, because it is quite fruity on the overrun. Memorably so, your neighbours may opine. 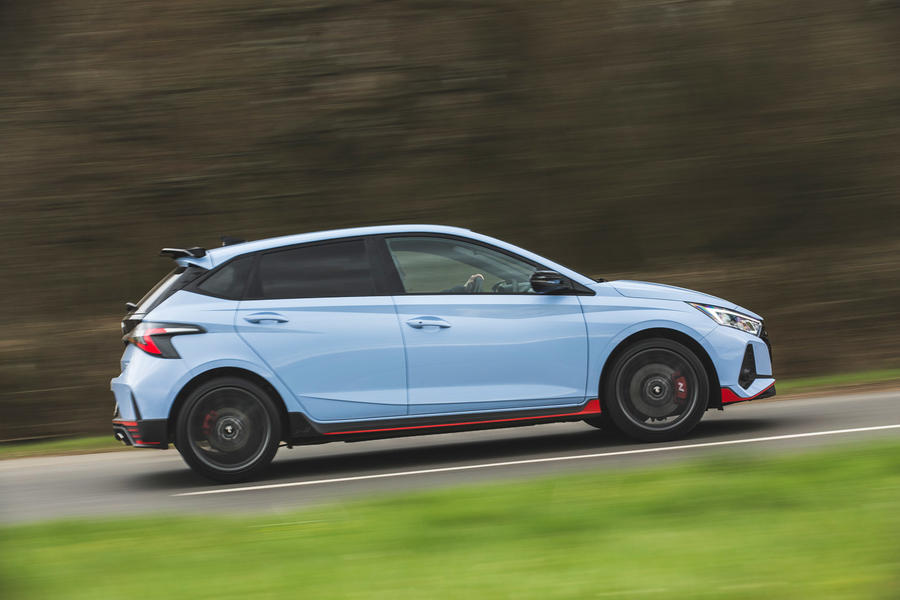 What’s quickly apparent is that despite their startling similarity on paper, the i20 N has a very different personality to the Fiesta ST. Beyond the occasional bobble, the body is neatly controlled, yet the Hyundai is evidently more softly sprung than the Ford, and its gait more sat-back. It seems happier to let the road ahead of it roll underneath its 18in wheels, dealing with bumps and ridges calmly and assuredly, rather than constantly needing to get up and at the next bit of Tarmac.

The steering feeds into this sense of security and composure. It’s measured and accurate, not especially quick but nimble enough, and shuns the light elasticity of the Ford’s rack for a more hefty flavour of linearity you can confidently lean on. I don’t want to turn this into an imaginary twin test, but there’s also less torque steer in the Hyundai. Just a pathological resistance to understeer as the LSD hooks up on the exit of bends. If you like serious-feeling hot hatches, you’ll like the i20 N, because that’s what it is, only shrunk.

And playfulness? Yes, actually. Though you do have to go looking for it. You know the powerful brakes on this car are intuitive because you rarely if ever acknowledge them, and it’s on a trailing brake that the Hyundai becomes joyful. It’ll cock a wheel without thinking, but remains stable and true to the line of your steering, even as the outside front Pirelli is clinging on for dear life.

You might even get a little lift-off oversteer out of this chassis, though these early impressions suggest the i20 N is neither as forthcoming nor as balletic and plain silky as the hyper-agile Ford in this respect. Then again, nothing is, and the main thing is that there is still plenty of life in the more neutral Hyundai’s handling. It, too, is an entertainer at heart. 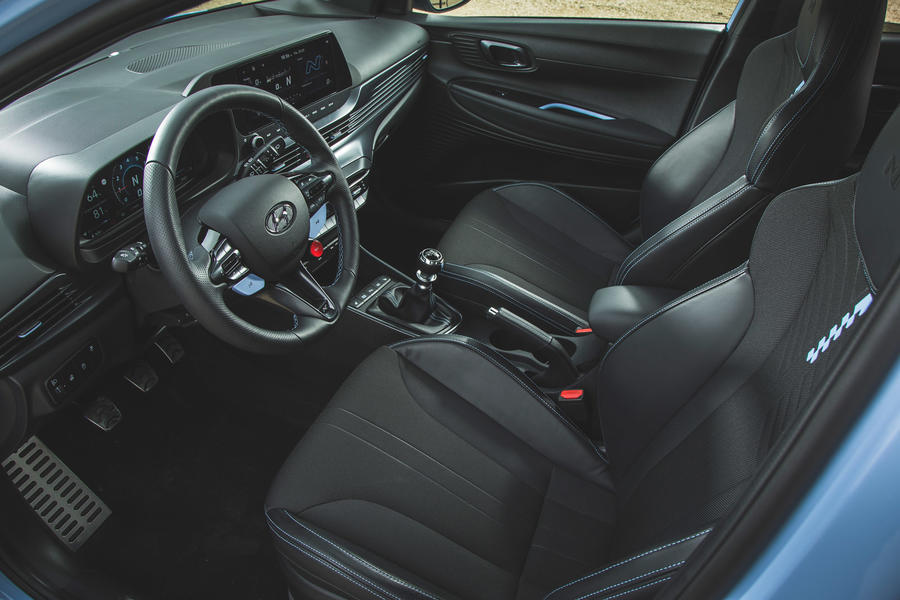 A real twin test with the Ford Fiesta ST awaits, and what a prospect that is. Two brilliant cars with similar ability, a similar asking price, but marginally different ethos.

But whatever the outcome of the contest, the i20 N is a sensational addition to the super-supermini clique. It has something of the rally refugee about it, if you’ll excuse the cliché, even though its slightly serious demeanour most of the time makes it easier to like than love.

Clearly we’ll have to spend more time with the punchy little Hyundai, because aside from the vaguely one-dimensional 1.6-litre motor, there’s serious depth in this package, and it needs exploring.

In the meantime, as something every bit as usable as it is searingly fast and rewarding to drive, the i20 N deserves all the plaudits that are surely coming its way. 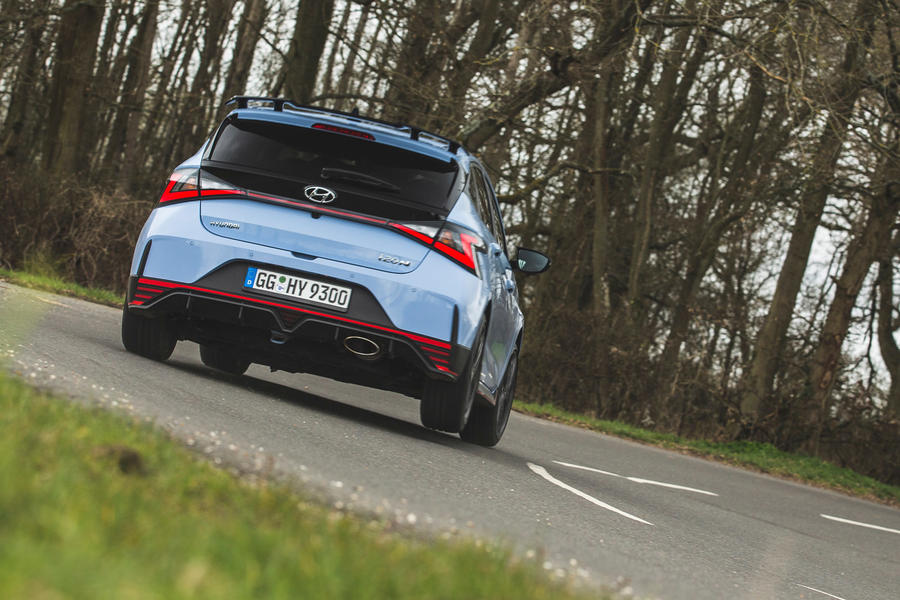 Brilliant little thing.  Looks even better than an ST.  I want one.

Obviously this is close to the Fiesta ST in many ways, except one.

The Fiesta will outsell the Hyundai, in this country at least, by easily 10 to 1.

The Fast Ford heritage is over 50 years old and that heritage line has been pretty well maintained.

This must be Ford's ST department worst nightmare after the i30N runs the Focus ST very close although there's not yet an i30N wagon yet. Although rather a bit pricier the GR Yaris comprehensively beats the Fiesta ST as the top hot hatch. Now this which goes toe to toe with the Fiesta ST in price and performance,I await the twin test between these two with bated breath