From £23,7807
Hot hatch twist on the familiar Mini formula gets updated for 2021. Is this latest JCW an improvement on the outgoing one?
Open gallery
Close

In recent years there’s been a nagging feeling that the adage ‘less is more’ could have been coined for the Mini. With every extra dollop of power, each new exterior add-on and, crucially, every additional pound on the price, the appeal of the classy and compact four-wheeled fashion accessory takes a little bit of a dive.

So, does the same hold true for the latest John Cooper Works, which sits at the top the go-faster pecking order (if you ignore the stripped out, limited run JCW GP, which in itself was a prime example of this theory, proving to be way less than the sum of its parts)? Like the rest of the Mini hatch line-up the JCW (as we’ll call it from here on in) has been treated to a facelift that coincides with the brand’s 20-year celebration of its launch of the first BMW-infused reinvention of Alec Issigonis’ 1959 trend-setter.

As updates go, this is a subtle one. In fact it's a harder spot on the JCW because its wings and splitters body kit looks very similar to its predecessor’s. Yet the reprofiled bumpers seen on other models are present and correct, as is the huge rear diffuser and the LED headlamps that are now framed in gloss black trim.

Inside, there’s the same refreshed infotainment system, which has crisp graphics and is a doddle to use, even if the 8.8-inch screen looks a little small. There’s also a rather nice new three-spoke steering wheel and a pair of hugely supportive high-backed seats, plus the usual smattering of JCW logos.

Under the ever so slightly different exterior, the JCW remains largely unchanged, which means it gets the same raft of enhanced parts that mean it’s more than just Cooper S with some different badges and an ECU remap. The brakes are larger Brembo items (330mm discs and four pot calipers at the front), while uprated springs and dampers are used for the front suspension, plus various components both here and in the multi-link rear axle have been lightened and strengthened.

Our car, however, wasn’t fitted with the new and simpler passive frequency-selective dampers that can quickly soften the ride by opening an extra valve when the car rides over a particularly aggressive bump, Called Intelligent Adaptive Damping it replaces the old electronically selectable two-way set up and is as a no cost option on the JCW. Mini claims the change is as a result of research that suggested drivers didn’t want to have to constantly swap modes in reaction to different surfaces, but it also has more than a whiff of cost cutting about it. 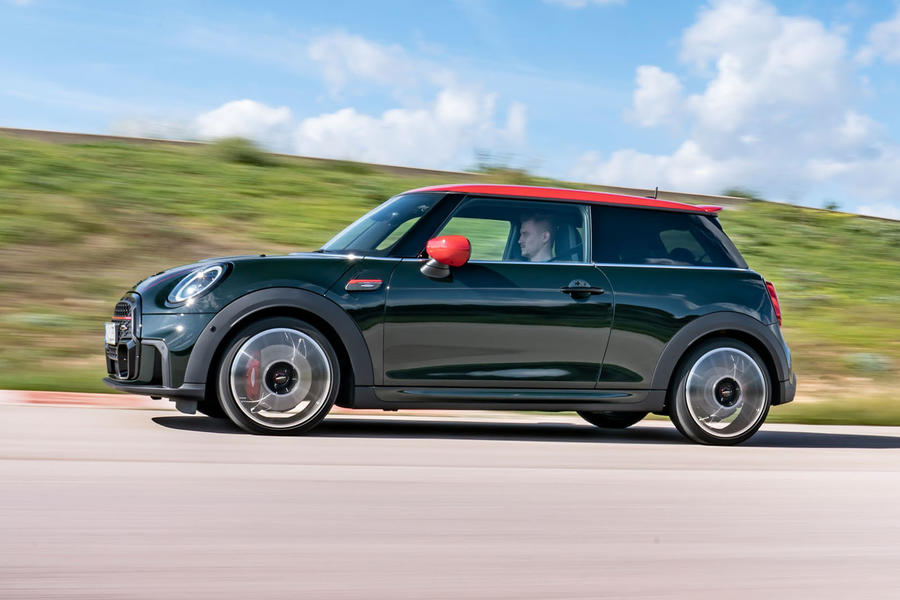 As before the gurgling and rasping turbocharged 2.0-litre delivers a very respectable 228bhp and a rippling 236b ft at just 1,450rpm. Given the firepower the on paper figures look as good as you’d expect, with 0-62mph all done and dusted in 6.1 seconds and a top speed of 153mph. Yet in reality it just never feels as quick as the numbers suggest, and that’s largely down to the £1,700 optional eight-speed automatic gearbox that’s fitted to our car.

It’s a smooth and unobtrusive transmission, and it’s increased efficiency figures no doubt play well with the WLTP white coats, but it also saps the vital speed sensations. You can use the paddles of course, but there’s still no real immediacy to the shifts, while the closely stacked intermediates give a dull linearity to your progress, leaving you pining for the lusty lunges of torque-rich acceleration the manual car would allow you to tap into (a quick back-to-back with a less powerful but three-pedal equipped Cooper S revealed that, subjectively speaking, the cheaper car felt quicker).

It’s a shame, because in other respects the JCW remains rather a lot of fun. The ride on the standard suspension is still on the hyperactive side, jostling occupants even on surfaces that look smooth, but with its compact dimensions, low roll attitude and wrist-flick, if mute, steering the Mini is even more direct and darty through the corners than the Cooper S, the whole car rotating quickly about your hips as you dive this way and that.

A corollary of the extra stiffness is that it also reacts more on bumpy surfaces, which means it’s less easy to plot an accurate line from entrance through apex and onto the exit, plus it requires more energy intensive approach from the driver - although for many these hang-on-tight hijinx are all part of the JCW’s appeal. 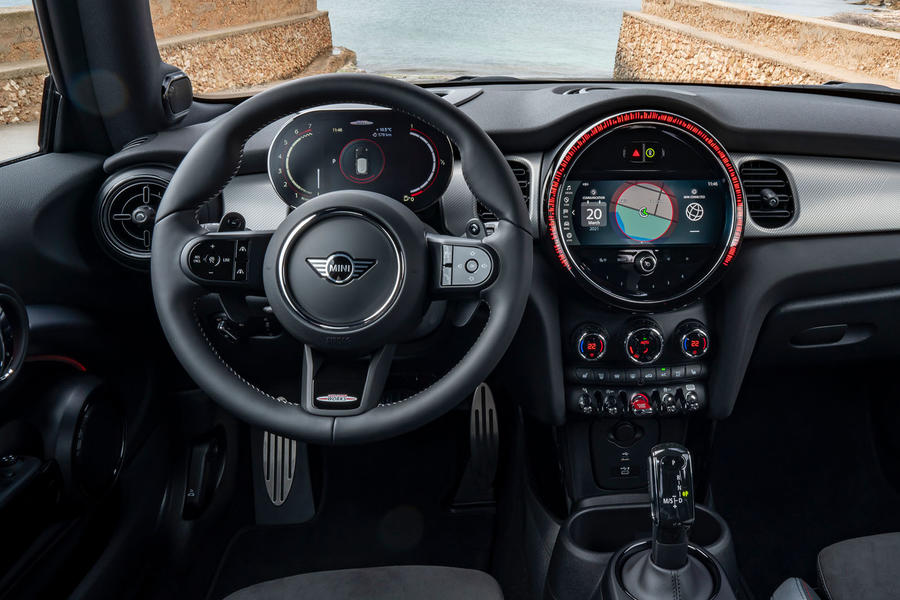 To come back to our original question, there is definitely a case to be made for spending less and getting more from you Mini. For a lot of drivers, the Cooper S delivers 99 percent of the fun for (depending on spec) a saving of around £5,000.

However, you can use the same theory when speccing your JCW, because by ditching the £1,700 auto in favour of the standard manual you’ll have a more engaging and entertaining Mini. So more for less. You’ll also have one that would’ve earned itself an extra half star here. Again, more for less. 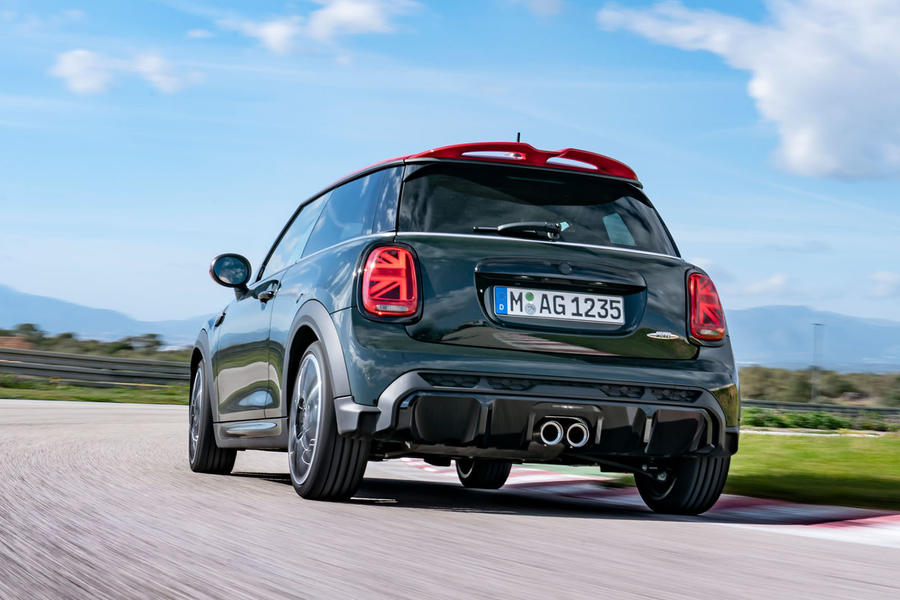 Biggest problem is, after twenty years, what else can you do with a Mini?, you can't radically change the shape, like the Golf, it's still got to have some resemblance to the original, put a new Mini beside an E39 BMW 5 series and you'll see what I mean, there about the same size?.

Biggest problem is the Cooper S, it's just to good

So if electronic damping has been dropped and no cost option is frequency dampers then why would anyone select the non FSD ? unless I missed something are the standard dampers the normal dampers or whatever certainly not as good as a well setup electronic infinitely variable.

Agree there will never be a review of a bog standard mini. Maybe autocar should consider nearly new readers / owners cars given how manufactuers only let you test the cars you they want you to test.