From £150,0908
Share review
Honda’s rare, alternative, unconventional and understated supercar has been tweaked rather than overhauled
Share
Open gallery
Close

This is a refreshed version of the second-generation Honda NSX: a car we liked, though we always recognised that it was highly unlikely to match the stature of its famous predecessor. The Ferrari 348 was a considerably easier benchmark to surpass in 1990, after all, than a McLaren 720S is today – and not just because of the passing of nearly 30 years.

The original Honda NSX changed the landscape of the market niche into which it emerged – and expecting to do that twice in a row was a tall order. Today’s very best £200,000 supercars probably only have the usability, visibility, drivability and all-round completeness that they do as a result of the legacy of that 1990s Japanese lightning bolt.

The 2016 version did what it could to rewrite the mid-engined rulebook again using electric motors and typical Honda-brand ingenuity – but ultimately, and by widely held consensus, it left plenty of untapped dynamic potential to explore. Three years later, Honda’s just given us the chance to find out how much of that intriguing potential its first mid-cycle revision on the NSX has unlocked, with a test of its latest 2019-model-year version.

The facelift budget can’t have been huge, mind you. The edited highlights are that the NSX now has new Continental ContiSportContact6 tyres; new anti-roll bars; new toe-link bushings, and a new design of wheel hub for the rear suspension; and electronically recalibrated adaptive damping, power steering, transmission and four-wheel-drive systems.

Outwardly the car comes in a new shade of bright orange paint and has had a very select handful of styling revisions. In the cabin you get a bit more standard equipment for your money, and a couple of new upholstery material options to choose from.

And, on the subject of money, the car’s now a chunk of change more expensive than it used to be – but given what’s happened to the price of sterling since 2016, you can understand why that might be. 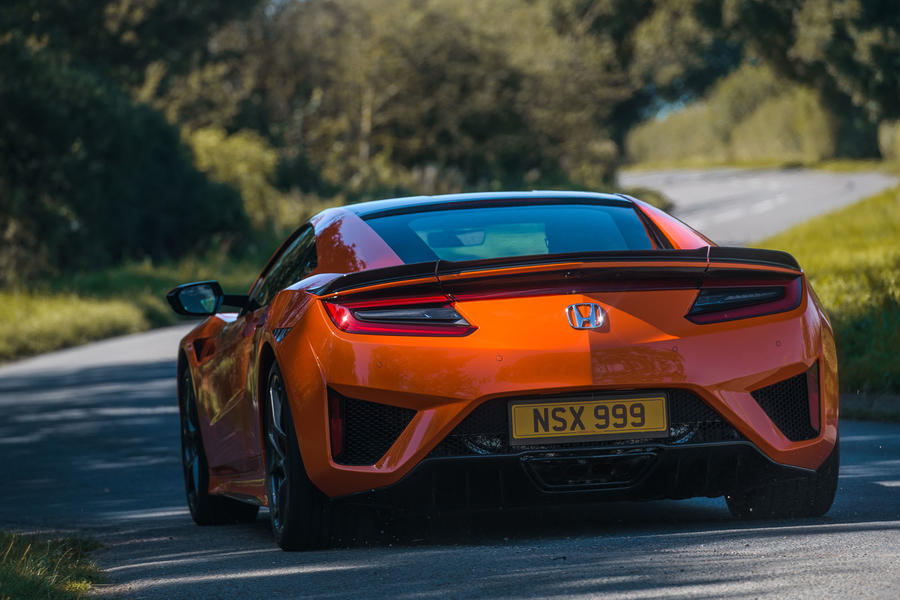 ‘Thermal Orange’ pearlescent paint certainly makes it look punchy, doesn’t it? If you can spot any of Honda’s exterior styling changes, you’ve got a keener eye for these things than me (there’s a two-inch horizontal strip of grille trim that used to be chrome and is now body colour, as well as gloss rather than matt black trim here and there).

Overall, though, you’d say this was one of the class’s better-looking supercars three years ago and it remains so. For the vast majority of supercar worshippers, of course, that design probably won’t offset the relative penalty of a car that comes with a Honda badge on its bonnet where a Porsche, Ferrari, McLaren, Audi or Mercedes-AMG crest might otherwise be. And for NSX owners? The discouragement of that element from the tiniest of owners' clubs would surely be a selling point all on its own.

The NSX’s interior could have done with a bigger upgrade, though. The driver’s seat still feels highly set and offers only just enough head and knee room for taller drivers. The major fittings of the wide-arching dashboard remain overly plasticky and cheap for a near-£200k car – and while the addition of smartphone mirroring on the infotainment system is welcome, the provision of some extra cabin storage would have been even more so (the car’s cupholders have to be clipped into a slot on the far side of the transmission tunnel, taking up room that ought to be available for the passenger’s right thigh). 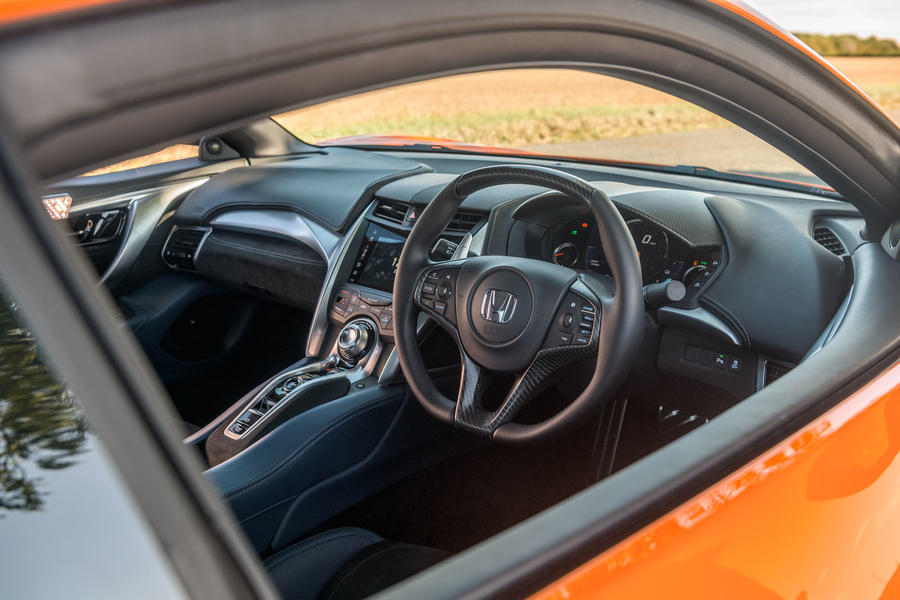 Like the cabin, the car’s three-motor, twin-turbo V6, 573bhp hybrid powertrain has also been left almost entirely untouched. It remains a likeable and unexpectedly simple, old-school-feeling engine, though.

Docile, quiet and even a little bit slushy-feeling under your right foot to begin with, the powertrain needs dialing into ‘Sport+’ or ‘Track’ mode to take on the sort of responsiveness and vocal attitude you expect of a supercar. Even then it doesn’t deliver the instant, neck-bothering speed of some big-hitting modern turbocharged performance machines with the ‘torquefill’ of electric motors on which to surf.

Nope - the new NSX needs revs to feel really quick, just as the original did, but get the crank spinning at about 5000rpm and it certainly does. Using paddleshift manual mode on the transmission instead of automatic (in which the nine-speed gearbox can jump between speeds a bit too readily, and acts like a bit of a turn-off to keen driving at times) makes it easy to ignore the gearboxes’ higher ratios and keep the engine turning over quickly. If you do, there’s plenty of high-adrenaline fun to be had.

It’ll take a track test to pronounce conclusively on the improvements made to the NSX’s handling, but on the road the car shows some incremental gains. While the pre-facelift car could feel wide, heavy and a bit soft at times by supercar standards, the new one can do also – but only really until its suspension and steering hit their more purposeful settings. At that point, the well-judged weight and tactility of the car’s steering really comes to the fore, and the car’s heft doesn’t seem so great or incongruous.

There’s perhaps a hint of extra tautness and flatness about the car’s lateral body control than there was before, and a shade more bite about the way it turns in – although neither transforms the driving experience. The NSX remains a supercar configured to be more fluent, precise and ever-drivable on the road than exciting at all times and at all costs. And that, too, is exactly how those who liked the same dynamic hallmarks about the original NSX would want it. 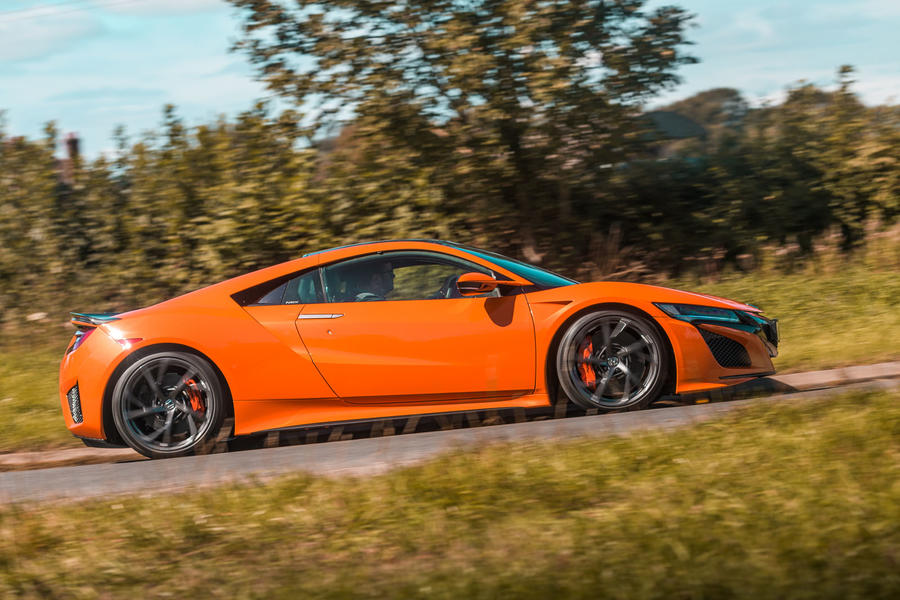 Much as the NSX is still very fast and enticing to drive, its size and mass both put a lid on how far it can tread, for out-and-out speed and thrills, into the territory that modern Ferraris and McLarens inhabit. You suspect they always will.

The car’s hybrid powertrain doesn’t provide the extra string to its driver appeal, in terms of a really convincing zero-emissions driving mode that you get from certain other hybrid supercars, either. In light of both facts, you might simply conclude that hybridisation has cost it a lot in return for very little – and that a more conventional supercar would just be a better choice.

In strictly objective terms, it’d be hard to argue with that. But if “conventional but good” is less appealing to you than “rare and alternative – and a bit vulnerable to criticism”, the NSX is precisely the kind of car that should be on your supercar shortlist – and somewhere close to the top of it, too.

You’ll be an unusual sort of buyer to prefer its understated technical appeal to the variously more bombastic symbols of wealth, status and dramatic thrill that its more outwardly exotic rivals represent – and you won’t be one of many. But you’ll be getting something genuinely leftfield and different: a niche player in an already-niche part of the car market, in which cars of this Honda’s qualities are very hard to find. 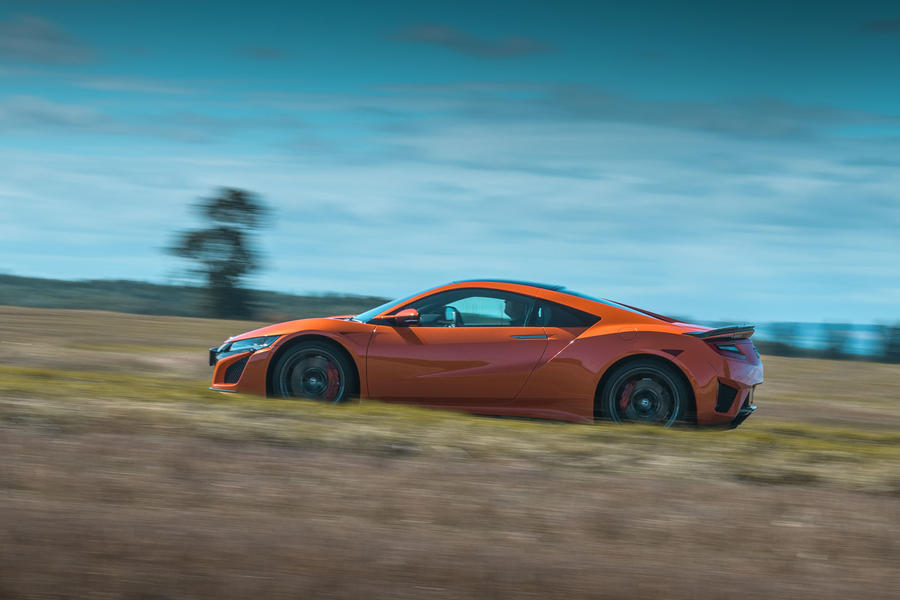 Go back and read any of the Autocar 348 Vs NSX Tests/reviews from "back in the day", including the group tests with the 348, Porsche 911, Lotus Turbo Esprit and NSX (including the road trip to Le Mans), and you will find that, despite the NSX being declared the better car, all of the Autocar writers said they'd have the 348 because, despite it being the harder car to drive fast, it rewarded the driver more, and had more character than the NSX!
James Dene 5 September 2019

Once beyond £50K, the marginal extra value in a car fails to keep up with the extra cost. The higher you go, the greater the gap. It isn't rational to buy cars costing above £50K and it's just totaly irrational beyond £100K. To find buyers, vehicles need to offer something that says 'I don't care, I just want it, indeed I must have it'. I don't see much of the irrational must-have here. The NSX is a rational car at an irrational price. Not an ideal marketing formula.

Always loved the way the NSX

Always loved the way the NSX looks, sporty and modern. Its kind of surprising how sleek and clean the design is considering Honda's design language these days is of not knowing when to stop, as if even whilst the final drawings are on the way to the prototype shop, a designer is walking alongside adding on yet more angles and rear light shapes. Its probably the one mistake that has damaged their general sales more than anything as they still know how to engineer well enough. Had a few days with the CR-V hybrid recently, its a really well engineered, clever car, but only its mother could love its looks.