BACK TO ALL NEWS
Currently reading: Honda NSX to get electric successor in £31bn EV push
UP NEXT
Maserati MC20 Cielo is 621bhp McLaren 720S Spider rival

Honda NSX to get electric successor in £31bn EV push

The Honda NSX will return as a supercar flagship for a 30-strong line-up of electric vehicles that Honda will launch as part of an ambitious £31 billion electrification strategy.

The supercar will be part of Honda's commitment to launching 30 new pure-electric vehicles globally as part of the strategy.

The Japanese firm has outlined its shift to electrification, pledging to achieve annual EV production volumes of more than two million units by 2030, ushering in solid-state battery technology and launching a pair of all-electric sports car flagships.

Honda aims to achieve net carbon neutrality by 2050 but says "a multi-faceted and multi-dimensional approach" to electrification is needed, "not a mere replacing of engines with batteries".

To this end, it will allocate a portion of a committed eight trillion yen (£49bn) R&D budget to developing hydrogen powertrains and battery-swapping hardware as a means of facilitating the phase-out of combustion powertrains over the next 10 years. Some five trillion yen (£31bn) is reserved exclusively for "electrification and software technologies". 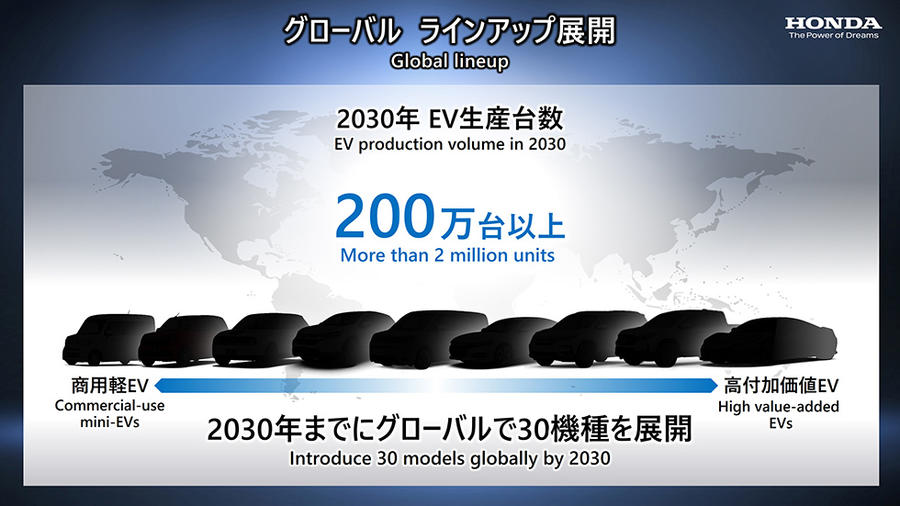 Honda has also given initial details of its rapid-fire global EV roll-out in the run-up to 2030, which most shockingly looks to include an all-electric successor to the Honda NSX supercar and a new grand tourer flagship.

"Honda always has a passion to offer fun for its customers," the firm said, giving no details of the new sports cars but promising they will continue to offer a "sports mindset and distinctive characteristics".

The Honda NSX is currently in its third generation as a 573bhp hybrid with a mid-mounted V6 and will bow out of production at the end of this year. This latest announcement is the first official indication that Honda plans to remain in the supercar segment as it transforms its business.

Honda is the latest Japanese brand to commit to offering dedicated sports cars in the electric era. Toyota has previewed a lightweight two-seater in the vein of the MR2, Lexus is working on an EV follow-up to the LFA, Nissan recently showed the drop-top Max Out concept and Subaru revealed a 1073bhp 4WD EV racer called the STI E-RA.

Meanwhile, in North America, Honda will launch two 'mid to large' electric SUVs in partnership with General Motors (one called the Honda Prologue and the other from its Acura premium brand) in 2024 and three years later will launch a range of 'affordable' EVs with "a cost and range that will be as competitive" as petrol-fuelled cars. Honda also plans to open a new EV factory in North America.

In China, it will launch 10 new EVs by 2027, and in its home market, Japan, it will start with a small commercial EV priced from around £6000 before introducing larger, passenger cars, including a new electric SUV.

The first details of the brand's European EV roll-out were given last month, when the firm confirmed it will launch a Honda HR-V-sized EV SUV in 2023 and is targeting a 40% share of sales for EVs and fuel cell EVs by 2030 in Europe.

But the marque has now detailed a plan to bring its own solid-state battery technology to market, investing the equivalent of £263m into the construction of a demonstration production line, which is planned to be in operation in spring 2024.

Honda plans to have EVs powered by solid-state batteries on sale in the second half of this decade.

At around the same time, in 2026, Honda will start rolling out a new software-integrated 'e:Architecture' EV platform, which will come with the latest generation of the firm's Sensing autonomous driving functionality. 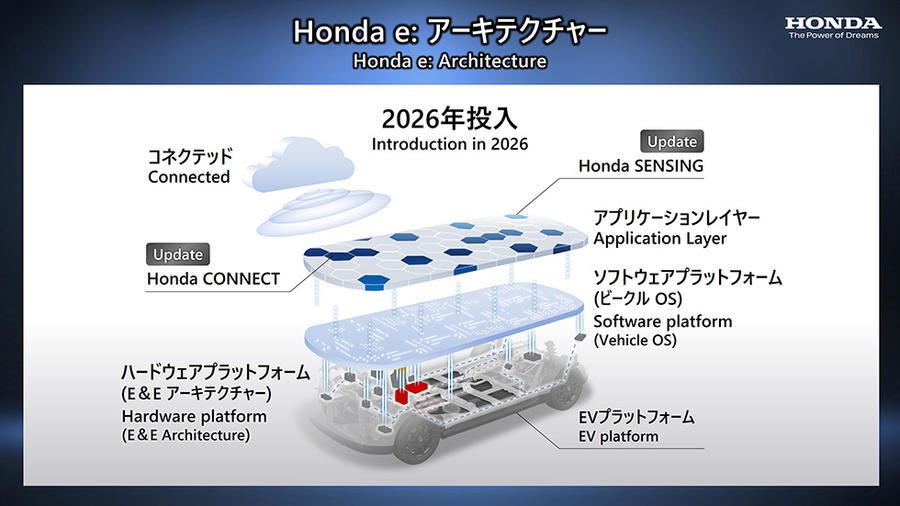 The enhanced connectivity brought by the e:Architecture platform plays a fundamental role in Honda's forward strategy. The firm said: "Honda positions its electrified products as 'terminals' and connects energy and information stored in each product with its users and society.

"Therefore, Honda will work on the establishment of the cross-domain connected platform, which will create new value for its customers."

As with other manufacturers, enhancing the connectivity of its vehicles will open up significant new revenue streams for Honda, which means it can "shift focus from non-recurring hardware sales business and strive to transform the portfolio of Honda businesses by combining hardware and software to expand connections with its customers and the range of its businesses".

How did honda get so far behind, still next to nothing till 2023. They've pulled their only Hydrogen car from production after total failure but it cost them dear.

Hope they put some of that shed load of money into a design studio and some talented designers...

Some of this was to be done in Swindon, but Brexit killed it off.

Honda were at the tipping point of having to decide if they were going to invest or not in EVs for Swindon, but couldn't tell what deal Brexit would be.   Would they be able to make a return on that investment?

They decided to instead invest in Japan where costs are high and there's labour shortages.   Even against that, the UK couldn't win because of Brexit.

No Honda manufacturing in EU either, so cannot see why you blame Brexit.

An EV NSX is right up my street, though I much prefer the original's more elegant styling.

Andrew1 12 April 2022
Actually Honda has two plants in Belgium. You brexiteers are notorious for not getting your facts right. You simply peddle the lie without spending 2min to do a Google search.
Brexiteer = the combination of ignorance and conceit.
Gfos 12 April 2022

Hi Andrew, well it is true they have two facilities in Belgium, but in fact one of them is actually a logistics centre, and the other no longer assmbles cars and is only a parts manufacturing centre. So i would suggest that it is a bit more subtle than it appears at first sight. I think many people would reasonably refer only to plants manufactruing whole cars in this context, although your observation is also valid. I would note it also only took me 2 minutes to check that fact on Wikipedia.

1.Honda itself said it was not related to Brexit.

2.In 2017 the import Tariff on importing Japanese cars to the EU was scrapped

That was another 2 minutes work

I correct myself in 2017 it was agreed to phase out the import tariff over 10 years.

I wouldn't confuse Andy1 with facts it confuses him

ZOMG!  Honda was going to build "some of" the NSX at Swindon!  You should tell Honda!

Some remoaners still don't understand why Japan are pulling out of europe, do some research on the France and Germany's cars for cheese deal, look it up and understand it was the EU that made it possible for Japan to manufacture at home and not pay tarrifs.

The EU cost jobs in the UK, stop ignoring facts.