From £11,0506
Share review
This SUV-inspired makeover for Ford’s city-friendly small car will find its fans, but the Ka+ Active doesn’t set any new benchmarks for the class
Share
Open gallery
Close

This is the latest evidence that not even the smallest cars are immune from the creeping influence of SUVs.

Ford’s not-quite-a-crossover is a slightly taller, slightly tougher version of the Ka+ five-door supermini — one that the company is hoping will help it top the record-breaking 200,000 SUVs Ford sold in Europe last year.

It follows the same basic formula as the similarly rugged Fiesta Active and will form a triumvirate with the Focus Active when it arrives early next year.

Quite how active you’ll actually get while behind the wheel is up for debate; while you get SUV-friendly features such as a boosted ride height, chunkier bumpers and wheel arches, as well as standard roof rails for sporty types to lug their gear around with, this is still very much a supermini best suited to town and city driving.

So that may make the car more suited to the perils of off-street parking than any kind of off-road adventure, but the 15in alloy wheels, chrome accents on the grille and foglights, exclusive interior fabric and slightly tweaked front end go a long way to helping the Active variant stand out from the standard car.

Ride height has been raised by 23mm, giving the Ka+ Active that upright, crossover feel that’s so in demand right now, while a larger anti-roll bar works with the electronic stability control to reduce the chances of rollover while those rails are fully loaded. It sits on 185/60 tyres, slightly skinnier than the 195/55s found on the standard car, for a marginally softer ride.

Otherwise, the mechanicals are mostly unchanged. The sole petrol engine is the 81bhp 1.2-litre three-cylinder unit also found on the rest of the Ka+ range, with 85lb ft of torque, a top speed of 105mph and hitting 0-60mph in 13.5sec. A 1.5-litre diesel also joins the line-up — a first for the Ka+ — but Ford isn’t expecting it to be a big seller. There’s still no Ecoboost variant, either, in order to keep some space between the Ka+ and the Fiesta.

The Ka+ Active has the same MacPherson strut front and torsion beam rear suspension as a regular Ka+, as well as a five-speed manual gearbox raided from the new Fiesta’s parts bin. 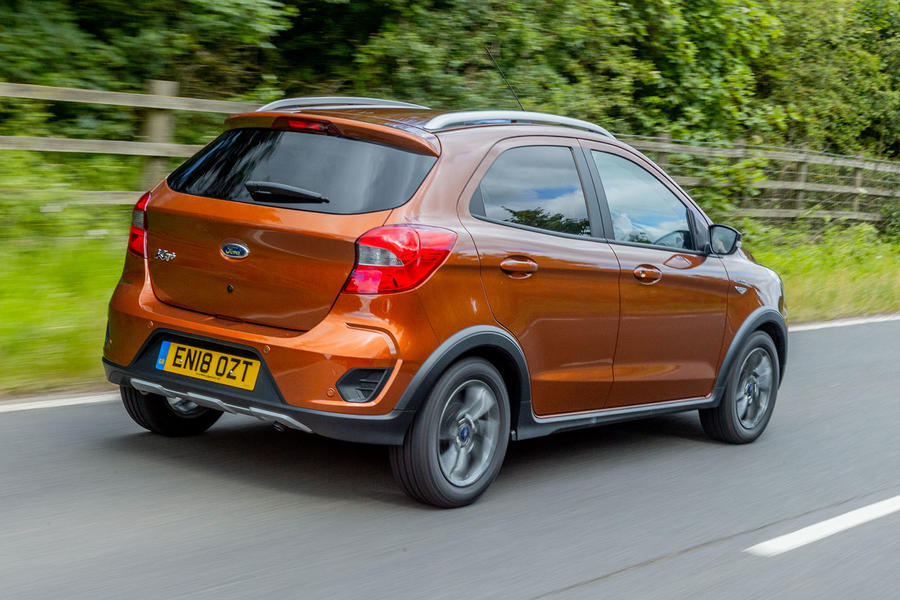 Not too dissimilar to the Ka+, which shouldn’t really come as a surprise. Both are smooth-riding runabouts, with the Active model managing to outdo the standard car in the way that it handles rough roads.

Body roll is magnified by the raised ride height and easily noticed, but the suspension still manages to mitigate the in-cabin jostle of most bumps and compressions.

Few entry-level superminis deliver an engaging drive, but the Ka+ Active gives a reasonable account of one, with precise and weighty steering that’s still easy to control for tight manoeuvres. In the right circumstances, it could even be considered fun.

The problem is a somewhat gutless engine. It has the power needed for the kind of city driving the Ka+ is best at, but it takes some real thrashing to get it up to speed with any urgency. Many of its rivals suffer in the same way, but that’s no consolation when you’re struggling to ascend even a mild gradient. The gearbox is at least precise and responsive for when you reach the shouty end of the rev range.

Inside, there’s now a clearer distinction between the Fiesta and Ka+, with the former having stepped things up but the latter still content to cover every surface in scratchy plastics. It’s still pleasant enough inside and the materials are suitably hard-wearing, given the target audience, but it’s impossible to miss the expansive dashboard stretching out in front of you.

The latest version of Ford’s Sync infotainment comes as standard and is a welcome improvement from the one in the outgoing Ka+. The 6.5in touchscreen has crisp, clean graphics and responds to taps very quickly. It has both Apple CarPlay and Android Auto, which you’ll need if you want navigation, because there’s no built-in system.

It makes concessions in the boot to achieve it, but two adults can comfortably fit in the back, with generous head room and a decent amount of leg room. You’d still want one of the front seats for longer journeys, though, on account of the more expansive leg room. 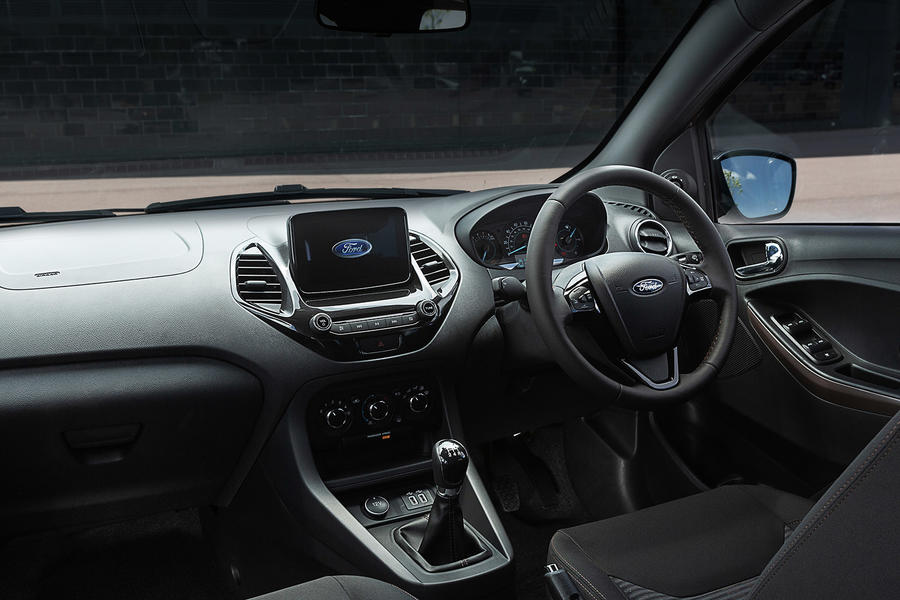 If you’re determined to drive something small but tall, the Ka+ Active delivers an attractive, compact package. It’s just that there are plenty of other high-riding superminis that compete on looks, technology and performance.

The Vauxhall Viva Rocks has the Ka+ Active beaten on price, while the Suzuki Ignis delivers genuine off-road capability for only slightly more.

Neither quite stack up in terms of ride and handling, but the Ka+ Active makes less of a case for itself with an engine that’s rarely at home anywhere but the city centre.

The Ka+ was already a bit of a niche proposition, and this Active model is even more so, but that’s unlikely to put off potential buyers who are already sold on SUV styling. 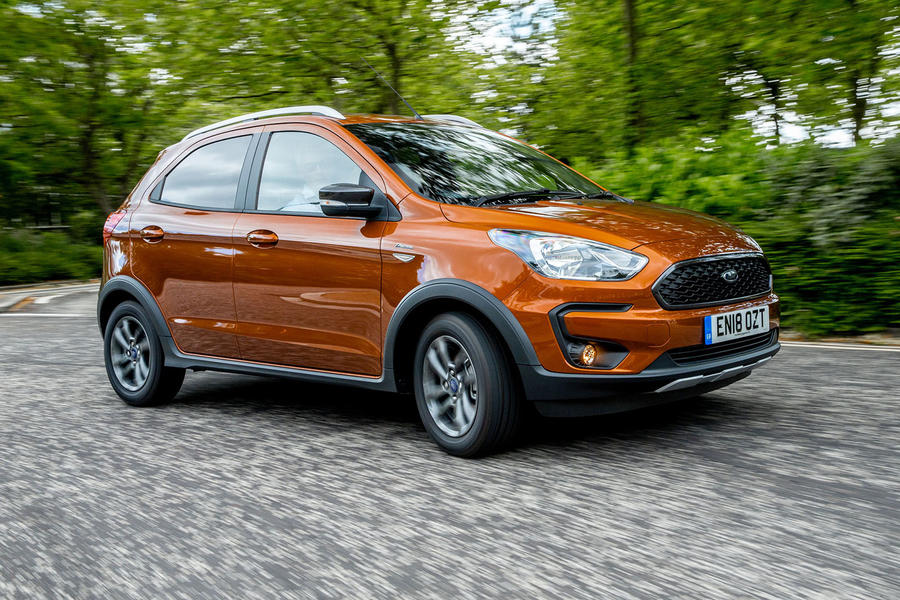 KA- Just when you thought it couldn't get worse

What makes this waste of Earth's resources even worse is that there'll be an expensive diesel option running alongside the gutless petrol version. And all for £12K, makes the £51k Touareg seem good value for money.

What makes this waste of Earth's resources even worse is that there'll be an expensive diesel option running alongside the gutless petrol version. And all for £12K, makes the £51k Touareg seem good value for money.

Then don't buy one!. What are you doing to rescue the resources of this beleaugered planet?.

Good vfm?...then go buy one outright and show us the proof that you put your money where your m o u t h is.

Correct me if I'm wrong but doesn't Ford make the KA+ in India???

At 13 Grand & manufacturing in low cost India, Ford must be making a fortune selling this in the UK!!!!

It might make sense if prices for this trim level started say at £10,500, after all it's built in India and if Suzuki can sell their Indian built models starting from just under £8k why can't Ford attempt to match that? after all the Ka+ isn't a cutting edge product is it. Personally I'm not sure that the Ka+ is a niche product,more likely it doesn't sell as it's expensive for what it is and there's far better vehicles on the the market than this

Like a bloated, sickly animal dressed in an ill fitting frock and slapped on make-up.  Dire, vile, sad.

As others have said elsewhere....

...why buy this overpriced little car when you can buy a Dacia Duster for the same money.....

How we all laughed...

...when MG Rover produced the Streetwise.  We're not laughing now...

...when MG Rover produced the Streetwise.  We're not laughing now...

As our roads are cluttered up with tat like this and the Ecosport.