The revival of a movie car icon or a cynical marketing ploy, depending on your view. Before driving it, I found myself in the latter camp, but its funny how opinions can change just by taking the time to enjoy and appreciate something.

As the name suggests, the Ford Mustang Bullitt has been built to mark the 50th anniversary of the film of the same name. The film itself was hardly a cinematic triumph, but is best known for an unforgettable car chase involving Steve McQueen at the wheel of a Highland Green Mustang GT390 Fastback chasing down two hitmen in a Dodge Charger through the streets of San Francisco.

Of course, none of that should be news to an Autocar reader. Rebooting an automotive film star from the '60s is a risky business, particularly given today’s models usually bear almost no relation to the original. Thankfully, that’s not the case with today’s 'Stang.

It may be bigger, heavier and, unlike the original, able to give you a fair chance of survival in a head-on collision, but it’s still familiar territory. There’s a shouty naturally aspirated V8 up front (albeit slightly smaller than the 6.4-litre GT390), while drive is sent through a manual gearbox and is put to the road via the rear wheels.

This is no quick paint job and badge swap, either. The Bullitt benefits from an open air induction system nicked from the Shelby GT350, bigger throttle bodies and a new exhaust. The result is a modest 8bhp power boost to 453bhp (US market versions get more power thanks to our tough emissions regs), as well as improved responses and, crucially, more noise.

Like the cars used in the original film, the suspension has been uprated with ‘heavy duty’ front springs and a stiffened-up rear anti-roll bar. A number of new features debut on the Bullitt and will transfer to the 2019-model-year Mustang, including a rev-matching system for the manual 'box, a 1000w B&O sound system and an active exhaust. 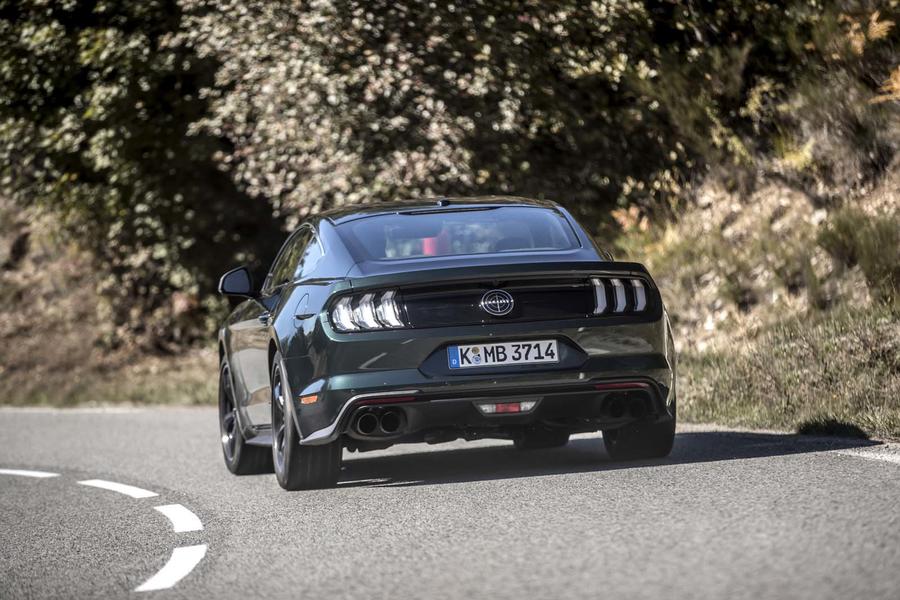 An event, to say the least. It’s also the perfect antidote to those who say modern cars are dull and characterless. Even the biggest cynics should be able to conjure up their inner child in the Mustang Bullitt, given the chance.

The excitement begins before you’ve even sat behind the wheel. The Bullitt’s debadged and subtly chromed front end is somehow far more menacing than the standard car, while the black-finished and silver-edged 19in wheels look great covering red-painted Brembo calipers. The period correct paint is standard, but you can opt for Shadow Black if you so wish (you shouldn’t, though). Even the badging is subtle enough to avoid being tacky.

Inside, it’s largely standard 2018 Mustang fare, except for a few neat details. From the superbly comfortable logo’d and green-stitched Recaro seats to the cue-ball gearshift knob and Bullitt graphics on the digital instrument display, it feels special yet remains tasteful. Granted, some suspect plastics and a less-than-intuitive touchscreen remind you this isn’t a product of AMG or BMW M, but then the price reflects that.

Stepping in and firing up the Mustang Bullitt is an event in itself. Ford has worked to enhance the old-school feeling of a V8 throbbing away under the bonnet at low revs, so it coughs into life with an almighty roar and settles to an animated, burbling idle. The beauty of this car, which it shares with the regular V8 'Stang, is that it doesn’t need to be driven in anger to feel special.

And that’s an important trait given that driving it flat out can be an intimidating experience. The biggest problem is its sheer size - it’s wider than a BMW 7 Series and, at more than 1.8 tonnes, weighs just as much. That wasn’t an overriding issue on the wide, well-sighted stretches of France’s Route Napoléon we tried it on, but navigating towns on the French Riviera was a daunting prospect in the Mustang.

Despite the substantial mass it has to fight, the Mustang is surprisingly composed in the bends. It’s not clear how much is down to the Bullitt’s suspension set-up, but in isolation it has better body control than you’d expect and plenty of grip. Only the steering lets the side down - the weighting is natural and it’s direct enough, yet the lack of feedback through the wheel makes it hard to work out the limits of a front end weighed down by a heavy engine.

Make no mistake, the Mustang isn’t in the same league as a Porsche Cayman, or even a BMW M240i, in terms of agility and driver engagement. You find yourself adopting more of a slow-in, fast-out approach in a tight bend, letting the car settle on its springs and using the V8’s grunt to either pull you back up to speed or unsettle the rear for some entertainment. Where a Cayman flatters you with ever-increasing cornering speeds, the Mustang demands that you manhandle it - and both can be similarly joyous in their own right.

That motor is central to this car’s fun factor both in terms of its fantastic soundtrack and its muscular power delivery. You’re unlikely to notice the extra power, but the immediacy of the engine’s response and the soundtrack are both better than in the standard car. 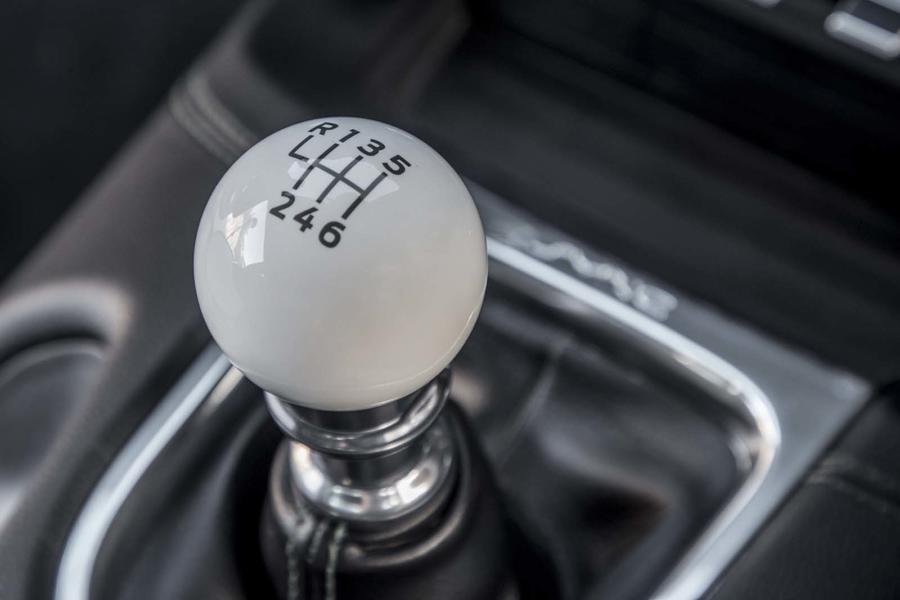 This is still a V8 that thrives off revs to get the best out of it, and the uncouth soundtrack (particularly with the exhaust in its raciest mode) and vibration through the controls ensure you never forget how many cylinders are out in front of you. The true muscle car feel comes complete with a weighty clutch and a manual gearbox that prefers you to slam it home with conviction rather than lightly feather it into the next cog.

Perhaps the most difficult question to answer is obvious: are the Mustang Bullitt’s additions worth the extra £5400 Ford asks for it over the already entertaining V8 GT?

Yes, it may have escaped your notice that Ford has steadily increased the Mustang’s base price over the past few years. But even the Bullitt is around £14,000 less than a Mercedes-AMG C63 Coupé - while BMW will no longer sell you an M4. That’s a substantial saving for a car that’s not far off in terms of outright performance, and endowed with a greater level of standard kit.

Yes, a base V8 will entertain in a broadly similar fashion and, no, objectively the 'Stang still isn’t a razor-sharp driver’s car. But when you consider the performance and and chassis tweaks, plus the extra kit offered, the price jump to the Bullitt seems pretty reasonable. If anything, the V8’s extra noise seems worth the premium all on its own.

When you then consider that the original Bullitt Mustang Ford, shipped around the world with this car’s launch, is worth in the region of $6 million, it seems a bit of a bargain. No wonder all Bullitts earmarked for the UK have already been accounted for. Perhaps I should have mentioned that earlier…

....I want one of these. It will be a great investment too!

Friend of mine has one on order and confirmed (lucky bastard), at least I will get to drive one I suppose.

wonder if they will sell for over value on second-hand market .

Of course they will. Most will have been bought solely with the aim of making a quick buck in my mind.

We all want something different out of a Car, speed, comfort, quiet, things like that, this Car isn’t overly priced infact a lot of the desirable, sensible fast Cars are in this price bracket, this as the article intimates is a Car to Drive in a relaxed manner, no need to hustle it slow in fast out as was said, it’s a matter of what you want not what some tell you you want.....

The more wallet-friendly way to buy into the Steve McQueen theme is of course to find yourself an (increasingly rare) good quality Puma!

Just picked up a V-reg 1.7 which has clearly been garaged, with no MOT advisories on rust - ever - and 86K on the clock for the grand sum of £875. Even adding the cost of the wax-oiling I've had done to all the cavities, I could still buy 45 Pumas for the price of this (admitedly superb) Bullitt.......

The more wallet-friendly way to buy into the Steve McQueen theme is of course to find yourself an (increasingly rare) good quality Puma!

Just picked up a V-reg 1.7 which has clearly been garaged, with no MOT advisories on rust - ever - and 86K on the clock for the grand sum of £875. Even adding the cost of the wax-oiling I've had done to all the cavities, I could still buy 45 Pumas for the price of this (admitedly superb) Bullitt.......

Stock up on Peugeot 206 wings too!

16 October 2018
Autocar wrote: "The film itself was hardly a cinematic triumph." Don't be absurd!

Bullitt was a critical success on release and currently rates 97% Rotten Tomatoes, 7.5/10 IMDB and 83% Metacritic.

It was also nominated for and won several awards.

And its boxoffice takings were a very healthy $42.3m from a production budget of $5.5m.

Before making sweeping statements, do your research!

Oh dear, here we go again ... another motoring journo pretending to be 'intimidated' by a car that's 1.92m wide. If poor Lawrence really did struggle to manoeuvre his Mustang through built-up areas, perhaps Autocar should find a more competent driver. It's the same old myth that's been peddled by Britain's motoring press for decades: anything bigger than a Sierra really ain't meant for ordinary punters; the Mondeo is a 'huge' car so don't complain when Ford charge extortionate prices for it; lazy V8 engines are absurdly self-indulgent. It's these patronising attitudes that saddled British customers with the Crapi, an absurdly compromised design that hinted at speed and workaday glamour but never delivered. The real thing - that beautiful machine which melted American hearts back in the '60s - was perfectly suited to our roads too; but the hacks said 'no', the public believed them, and FOMOCO kept us waiting almost half a century. Better late than never, I guess ...

Not on the same league as an

Nonsense. This is one of the few great cars for drivers still out there.

Dunno if this a whole new

Dunno if this a whole new model or a facelift, but that is one ugly car!