Three wheels or two, it genuinely doesn’t seem to matter. For one of the friendliest but also most addictively feral performance cars from any era and at any price, anything less than the full four contact patches appears to be its preferred mode of attack.

The M235’s gymnastic talent is something we’ll return to but, on paper, tuning stalwart Mountune’s latest take on the Ford Fiesta ST is simply for the person who wants an everyday supermini but craves something hotter in the engine bay.

This £890 aftermarket kit duly delivers, pushing Ford’s 1.5-litre three-cylinder Ecoboost engine to the brink of what it can reliably muster before stronger internals are required at considerable cost. Power rises from 197bhp to 232bhp while torque increases 44lb ft to 258lb ft for a 0-62mph time that sneaks below six seconds and midrange performance that feels, to put it lightly, decidedly grown-up.

The hardware changes are modest, and that’s reflected in the price. Included is an upgraded aluminium airbox, high-flow panel filter and a new lower air-feed hose, which together prepare the ground for an ‘mTune’ smartflash drive to plug into the car’s OBD port and safely lay down Mountune’s engine map. The software can then be switched off (and back on again) via your smartphone, and there’s one very good, exhaust-related reason why you might want to.

That is the basic M235 upgrade. However, as with all of Mountune’s development cars, this particular Fiesta ST exists as a rolling menu of everything an owner on a generous but not bottomless budget might try.

It therefore uses Mountune’s high-flow induction hose (£85) and beautifully finished throttle body elbow (£99). Look through the lower grille and you’ll also see a new prototype intercooler, which maintains performance through a wide range of ambient temperatures and is expected to cost around £350. You may have noticed the car is also sitting closer to the ground than standard – by 20mm, thanks to new springs (also prototypes, so no price) that use similar load settings to the factory items, only with less travel.

The final mechanical mods consist of Mountune’s billet quick-shift kit, which for £150 shaves one quarter from the travel of the gearshift throw, and a big-brake upgrade with 302mm discs up front, for £1295.

The remainder are cosmetic additions: the decals, rear wing and chunky mud-flaps don’t add any performance but do bring a street-fighter look to match the car’s pace.

Hit the engine-start button and there’s not much that separates the M235 from the standard ST. The bubbling exhaust note is a fraction deeper, but mainly it’s just nice to find yourself in such a well-sorted cabin. The part-digital dials are clear, the Recaro seats are nicely dished and bolstered, and the squab feeds your shins out towards three well-positioned pedals. The Mk8 Fiesta ST also gets plenty of steering column adjustability, and overall the driving position puts some very serious and expensive machinery to shame.

However, another thing that hasn’t changed is the simmering, agitated ride at town speeds. It’s difficult to say whether Mountune’s springs exacerbate the problem, but they certainly don’t alleviate it. Given M235 customers will sit at the more committed end of the Fiesta ST owner spectrum, I’m not sure how much this matters, but don’t expect anything less than jowl-tugging firmness.

So here’s some advice: get out of town. The regular Fiesta is one of the most exploitable driver’s cars on real roads – another member of this club is the phenomenal Alpine A110 – and Mountune’s kit makes it even more thrilling. The first thing you’ll notice is in-gear performance. Things are more frenetic at the top of the rev range, and this is welcome, but it’s the extra torque that means you can select third gear and take apart long stretches of road, driving into and out of even tight corners in smooth, fast arcs, and generally indulging more in the chassis. Despite the short-shifter, changing gear is still no great joy and the motion feels a bit vague, so sticking to one ratio is no sacrifice.

As for objective speed, realistically you couldn’t (and, frankly, shouldn’t) want for any more. Mountune’s Fiesta is quick, but the engine’s efforts stop just short of giving the limited-slip differential a stroke on rougher roads, and this matters. Sometimes a twitchy front axle can be exciting but most of the time it just detracts from the satisfaction of your flow, and the combination of 258lb ft and Quaife hardware feels like a sweet spot before progress gets hairy. Michelin’s Pilot Sport 4S tyres are also excellent – soft in feel but stable.

The engine upgrade alone therefore seems well worth the outlay, but another strong trait of this car is its turn-in response. Sitting lower, there’s less slack in the M235’s suspension when you change direction hard. So light (but also so grounded) is the nose that you’ll struggle to unearth meaningful understeer on the road. The rear is evidently also tighter than standard because, as the M235’s nose dives inwards, the tail’s enthusiasm for sliding wide seems greater than ever. For cars that feel so wild on the move but are actually forgiving and tolerant of heavy hands, the M235 is probably in a class of one. It begs to be thrashed but rewards neat and precise inputs, always wants to play and never bites. B-roads are a playground, and the car flatters.

A less palatable element of the kit is the exhaust tuning in Sport and Track modes. Customers asked for off-throttle theatrics and so the M235 gurgles like a drain if you lift off the accelerator from high revs. It’s not especially authentic, and is one reason to turn off Mountune’s map via the app. And talking of off-throttle quirks, this kit unsurprisingly does nothing to lessen the pronounced flywheel effect of the factory Ecoboost engine.

A small gripe, admittedly, but with an otherwise stellar driving experience, a touch frustrating all the same. The supercharged 1.6 in the Toyota Yaris GRMN remains in another league, not least because this Ford triple also still suffers a little from turbo-lag. 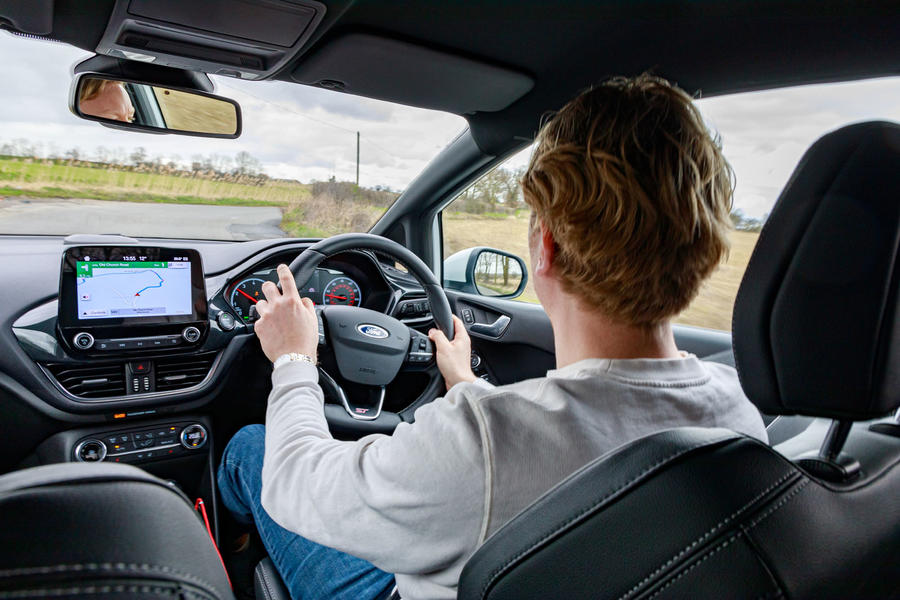 Nevertheless, there’s just so much to recommend here. The M235 power hike is worth having because it meaningfully improves the driving experience and is also warranted by Mountune. The case for the new springs is less clear-cut but still strong, depending on your outlook.

Lowering the body has given the Fiesta’s front axle 911 GT3 RS levels of tyre-to-wheel-arch snugness, and this looks fantastic. The car’s also simultaneously more agile, deliberate and playful, though you need to be driving 10mph quicker on any given road to get this set-up working at its controlled and supple best. This can be difficult to maintain and, without enough load going through the springs, the car can feel brittle and ragged, so be prepared to commit.

And that’s the thing about the Mountune M235. Three wheels or two, it’s only really for the committed, but what a treat those owners have in store for their very first B-road blast. 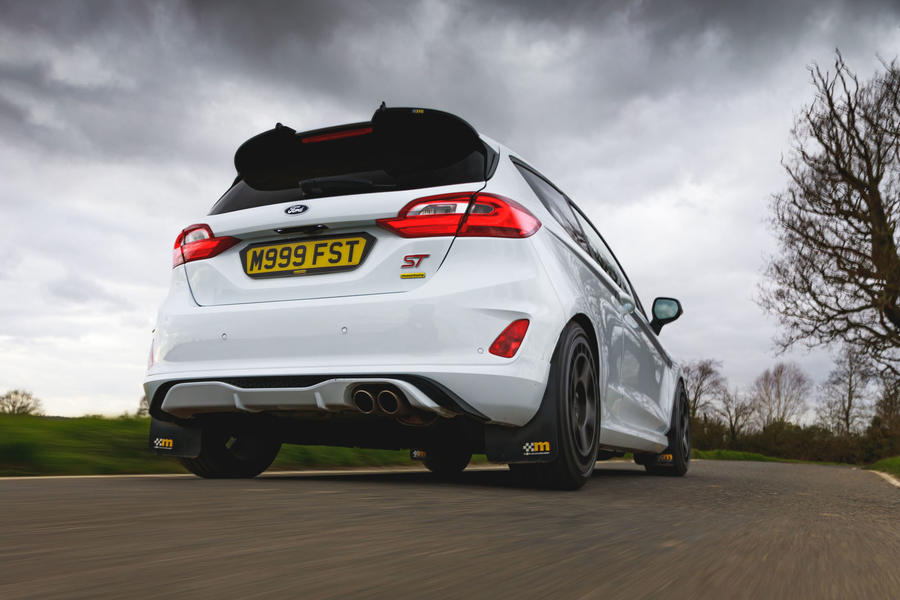 Why is the top speed estimated? Did Mountune not take the time to put their mod around a track to test it? They surely must have done plenty of testing but didn't get around to flooring it on a straight?

I did say "probably"!!I have not been lucky enough to drive a 911 so cannot talk from experience.  What I read though suggests that, pick the right one, and you are close to motoring perfection.

I have driven quite a few fast Fords though (my first being my own mark 1 Fiesta XR2, which was brilliant).  They have  all been excellent.  I suspect that the only thing that might put a bigger smile on my face when driving them might have been even more power for a bigger shove in my back when accelerating.  However, on most British roads there aren't many places you can safely (and legally) do that.  The majority of the time though, you can have a lot of fun with a much more simple, much cheaper small Ford.

Buy, tune, drive and use it up, some 10 thousands miles later remove the tune, sell the car as stock to the unsispecting new owner, let him deal with the hidden problems due to increased and premature wear and tear.

Dodgy ground there my friend

Removing stuff does not get forgotten. When the car next visits the garage for a service, the mechanic will know! It'll be down to the person you sold the car to take action on you or not.
View all comments (5)