Mercedes-Benz isn’t hanging around when it comes to launching electric models. In fact, the new Mercedes EQB is the fifth from its EQ electric car off-shoot, following on from the Mercedes EQC, EQA, EQV and EQS – all within the past two years.

As its appearance suggests, it is based heavily on the Mercedes-Benz GLB. And just like its internal-combustion-engined sibling, the new SUV offers the choice of five seats as standard or seven seats as an option – a factor Mercedes-Benz is banking on to provide it with wider sales appeal than its key premium brand rivals, the Audi Q4 E-tron and BMW iX3.

The EQB and GLB share the MFA (Modular Front Architecture) platform used across Mercedes-Benz’s compact car line-up. It has been modified in a number of areas to accommodate the EQB's dual electric motor driveline, a lithium ion battery and associated power electronics – all of which are mounted low within the high-strength steel and aluminium structure to give it a low centre of gravity.

The modifications also extend to the outer body, albeit on a very subtle scale. To help provide some minor visual differentiation between the EQB and the GLB, Mercedes-Benz has given its latest EQ-badged model a blanked-off grille, a lightly reworked front bumper, EQ badges within the front wings and tailgate, full-width tail-lights and a revised rear bumper without the integral tailpipes of its petrol- and diesel-engined siblings. 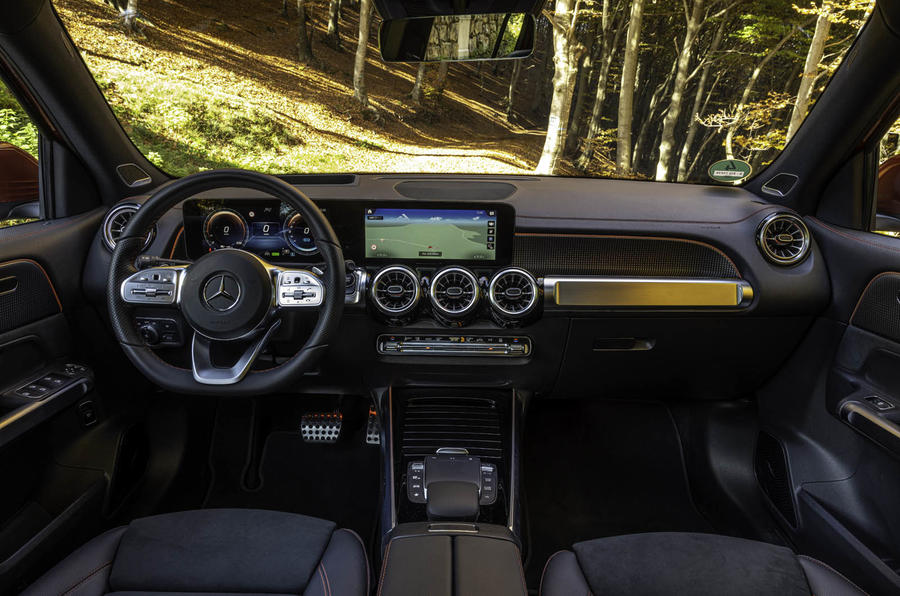 Officials suggest aerodynamics played a crucial role in the development of the new model, but drag-inducing elements such as the roof railings and raised ride height remain. Despite this, the addition of improved sealing within the front end and flat panelling within the underbody allow the EQB to equal the drag co-efficient of the outwardly more shapely Audi Q4 E-tron quattro at 0.28.

For now, there are two EQB models. Mirroring the layout of the larger Mercedes-Benz EQC, they feature an asynchronous electric motor up front and a synchronous unit at the rear for four-wheel drive capability. They also receive a lithium ion battery that operates at 420V and has a nominal capacity of 190Ah, giving the new Mercedes-Benz model usable electric energy storage of 66.5kWh.

Inside, the dashboard design and its switchgear are closely related to the GLB's. The only obvious change is the inclusion of model-specific digital instruments and new energy consumption and energy flow functions for the infotainment system, which operates via the same-generation MBUX system found in all of Mercedes-Benz’s current compact car line-up. 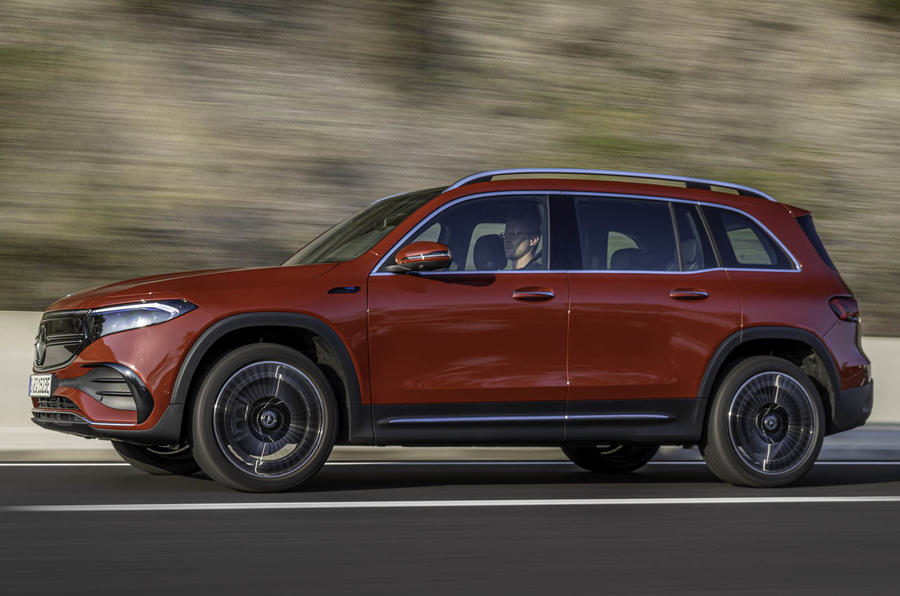 It is all suitably premium in feel and the material mix is agreeable, with soft-touch plastics and galvanised trim elements throughout.

Accommodation is also on par with the GLB. This means space for five in two rows of seats and up to 495 litres of boot space, or seven in three rows.

It requires a good deal of dexterity to thread your way around the second row of seating before you reach the rearmost seats. But they do offer a reasonable, if not generous, amount of room.

The second row can be slid fore and aft by 140mm, so you can alter the rear leg room at the expense of load capacity. With the second and third seat rows stowed away, you get up to 1710 litres of boot space – 220 litres more than that claimed by Audi for the Q4 E-tron quattro. No lack of versatility, then.

The drivetrain is programmed to favour the rear electric motor at lower speeds around town, where it operates mostly in rear-wheel drive mode for added efficiency. The front electric motor is introduced during periods of strong acceleration and at higher speeds, giving it four-wheel drive capability when it needs it most.

There are three driving modes as well as an individual setting that allows you to tailor the characteristics of the driveline, steering and damping to your specific liking.

In Eco and Comfort, the throttle response is quite relaxed and the speed limited to 80mph before the engagement of kickdown, giving smooth, quiet and calm driving qualities that are likely to suit most prospective buyers. The overall balance between performance and refinement here is quite appealing.

In Sport, the response is noticeably sharper. There is no extra power, but the calibration of the throttle is such that the initial tip-in elicits far more urgent acceleration. So configured, the step-off performance is quite strong, endowing the more powerful of the two EQB models with engagingly nippy qualities around town. On more open roads, progress is swift without ever feelingly luridly aggressive like in some electric-powered rivals when pushed hard.

An energy recuperation function allows you to alter the amount of kinetic electricity harvested on a trailing throttle via paddles mounted on the steering wheel that offer three defined modes as well as so-called 'situation optimised recuperation', which is available in combination with the Eco driving mode. In the highest setting, D-, the braking force is quite strong, allowing one-pedal driving in many situations. 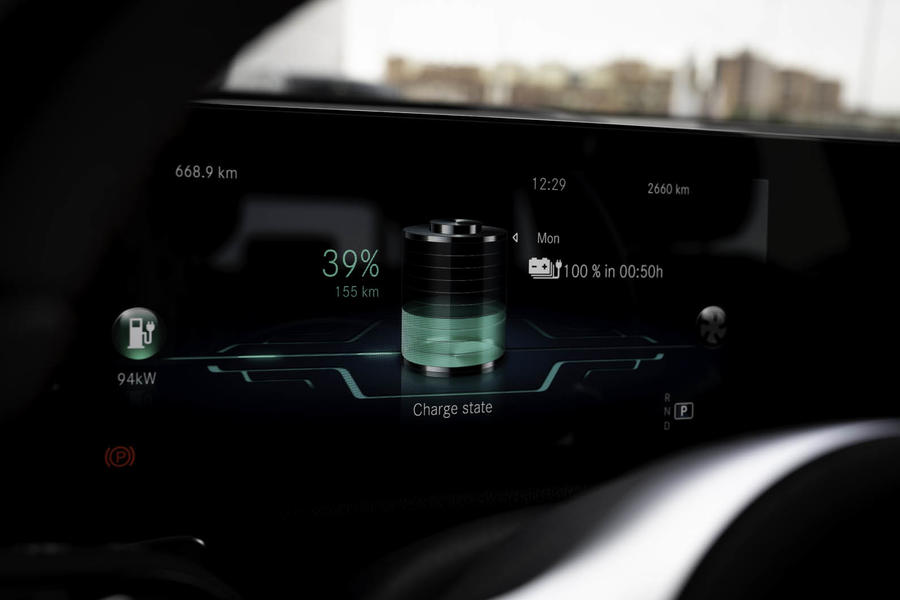 The EQB 350 4Matic’s battery is smaller than that offered by its rivals, at 66.5kWh versus the 76.6kWh of the Q4 E-tron quattro and 74.0kWh of the iX3. This is reflected in the official WLTP range of the new Mercedes-Benz model, which at 255 miles is 54 less than that claimed by the Audi and 30 miles less than the BMW, despite average consumption of 3.8mpkW.

Even with the added weight brought on by the battery, the EQB 350 4Matic manages to serve up characteristic Mercedes-Benz-like dynamic qualities and plenty of comfort owing to its long-travel suspension and, on our test car, optional variable damping control. They combine to provide it with impressive body control and good isolation of road shock.

There’s also plenty of grip and strong traction thanks to the standard 4Matic four-wheel drive system.

The steering is worthy of note, too – direct off centre, well weighted in each of the driving modes and with a decent amount of feedback. Oddly, though, you do tend to get a touch of torque steer when you unleash the combined reserves of the two electric motors from standstill

With charging times such an integral part of the electric car experience, the EQB’s 100kW maximum charge rate might appear somewhat disappointing next to its rivals, nearly all of which offer higher charging rates and faster charging times. Mercedes-Benz claims a full charge takes just 32 minutes on a high-powered DC system. You’ll need considerable more patience on an 11kW AC system, though, which takes up to five hours and 45 minutes to deliver a full charge.

The EQB is a worthy rival to the likes of the Q4 E-tron and iX3 in many key areas, bringing the overall versatility of its combustion-engined sibling together with agreeably punchy performance and the sort of relaxed and comfortable driving traits that will appeal to a wide range of buyers.

You’ll need easy access to a charger, though, because its range and charging power capacity are both behind the fast-improving class standards. It also won’t be cheap. Official pricing is yet to be announced, but if the EQA is any guide, expect to pay a £10,000 premium over similarly specified GLB models, with the EQB 350 4Matic driven here likely to cost around £55,000 when UK deliveries get underway in the spring. 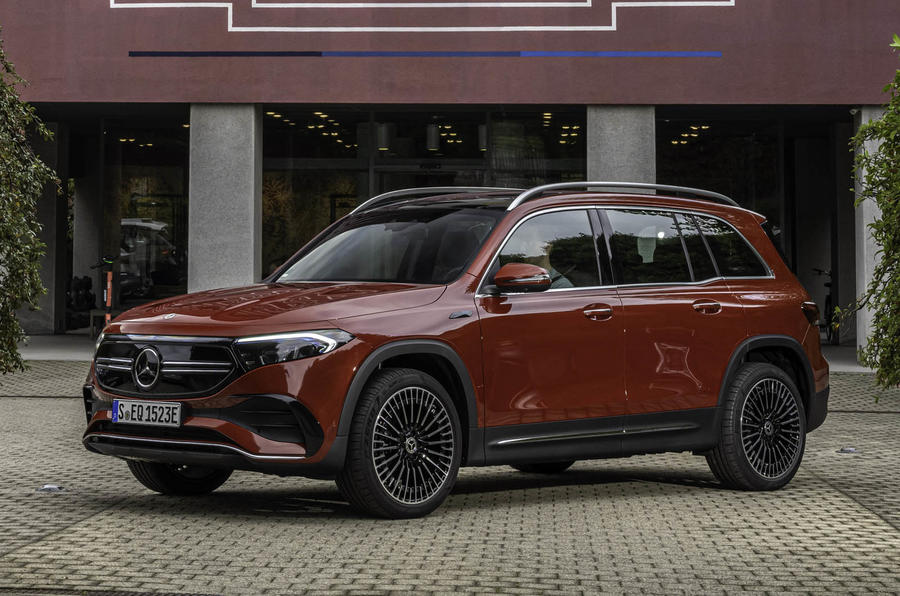 I don't find any of the Mercedes EQ range attractive at all... and I'm a Mercedes owner and generally a fan of their cars. I'd rather they just made them look like the ICE variants they're based on. The attempts at differentiating them based on aero optimised front ends just makes the cars look frumpy. I don't think that particular wheel design suits the car either.

Seiously UGLY. Lacking any redeeming factor in its design.

What were they thinking?

Mercedes has lost the plot, and I am referring not only to this pointless run of the mill non-entity.