From £252,76510
Track-focused 488 is surprisingly docile on British roads, ensuring none of its astonishing performance is wasted
Open gallery
Close

The Pista is a sensationally good mid-engined Ferrari, and one that is far more approachable than the big, scary numbers on the spec-sheet might suggest. This you’ll already know, having read Matt Prior’s dispatch from Maranello.

But now we have the £252,765, 710bhp 488 Pista on home soil for the first time. It’s an opportunity to see if a machine only a slither slower than the 950bhp LaFerrari around Fiorano really works in tightly hemmed environment better suited to the likes of the Ford Focus RS, Lotus Elise et al.

As a quick reminder, this is the successor to the 458 Speciale, 430 Scuderia and 360 Challenge Stradale. It’s a hell of a bloodline, because each of those cars has been achingly good to drive, listen to and generally be around not only when they were launched but to this day.

Like the Speciale, the Pista drives its rear wheels through a seven-speed Getrag dual-clutch gearbox and Ferrari’s latest electronic differential. Along with some savant-like brake-intervention tuning, the latter helps Ferrari’s Slip Angle Control software assist you, the driver, balance yaw angles of up to 30 degrees. At the same time, 0-124mph is claimed to take only 7.6 seconds. The point is that Ferrari wants this car to be fun as well as fast.

But it is serious, too. It’s possible to spec a Pista to be 90kg lighter than the 488 GTB on which it’s based, which is no mean feat. The rear screen is plastic not glass, there’s far less sound deadening, the exhaust manifold is made of Inconel and much of the bodywork is now carbonfibre rather than aluminium. Long story short, the car’s power-to-weight ratio about matches that of a Veyron, so perhaps Ferrari’s mastery of modern electronic systems is as much a duty of care as a ticket to the funfair.

And on the small matter of spec: we are talking about an Italian supercar here, so naturally it’s possible to go into the stratosphere with options. There are too many to list, but for a taste, on-board telemetry costs £5760, four-point harnesses £2112, the gorgeous one-piece carbon seats £7200, a roll-bar £2208, black ceramic exhaust pipes £960, and Apple CarPlay a ludicrous £2400. The icing on the cake is the £8640 two-tone racing stripe, which many will understandably have to have, however poor value it may be. 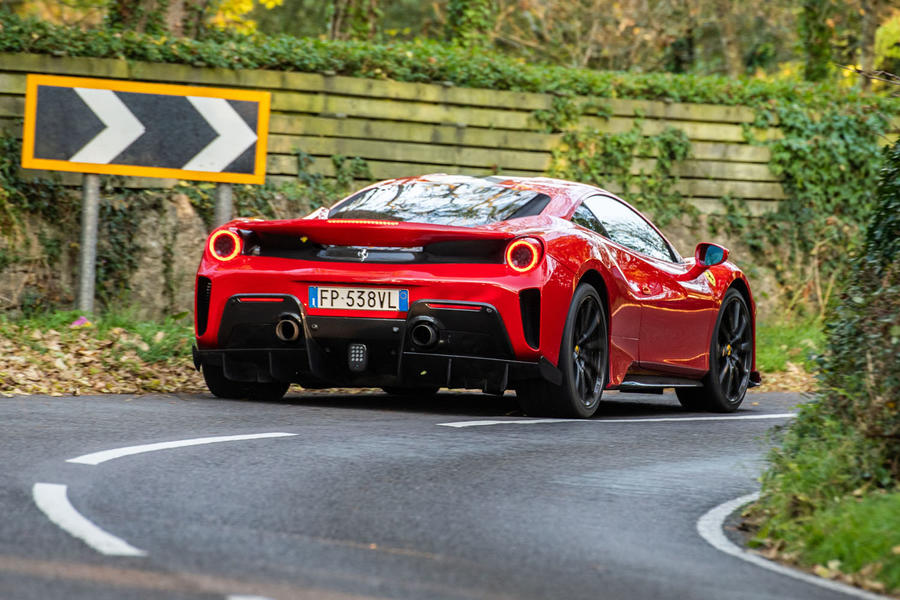 We should also talk about the £14,208 carbonfibre wheels. More owners will option them than not, and wisely so, because further reducing any unsprung mass only heightens the Pista’s sublime responsiveness.

As goes the modern Ferrari habit, the steering remains extremely direct – overly so for the road, at two turns lock-to-lock. And yet this is an electro-hydraulic set-up that’s intuitive and more reassuringly resistive than the electrically assisted system in the 812 Superfast. Along with stiffer springs than the GTB, a subtle drop in ride height and next to no body roll, direction changes are akin to flicking a switch. A beautifully weighted switch with a perfectly crisp action.

On British roads the Pista feels loud, wide and every bit the attention vacuum a new trackday Ferrari should be, but it’s a strangely easy car to drive fast and much of this is also down to the damping. Once again, 'bumpy road' mode, which softens the set-up, excels. How is it we’ve got to a point where a mid-engined homage to Ferrari’s sportscar racers conducts itself with greater pliancy, poise and predictability than the flagship GT car? There’s no doubt the Superfast is misconceived – too focused for the road – but by any standard the Pista is remarkable in its ability to absorb the road beneath without giving away anything in body control.

Unlike McLaren, Ferrari prefers to use an aluminium monocoque rather than a carbon tub but there’s no discernible flex and with so little weight to manage the two-way adaptive dampers provide pure, uncorrupted control. ‘Unflappable’ is a much-abused term but unless you’re downright clumsy with the throttle or spectacularly misjudge that crest or camber up ahead, the Pista feels as trustworthy as a Land Cruiser in the Outback.

All this is just as well, because so potent is this 3.9-litre flat-plane-crank, twin-scroll twin-turbocharged V8 that it can genuinely spook you even if you’re used to quick stuff. Figures of 710bhp and 8000rpm and 568lb ft at 3000rpm signify extraordinary breadth and are achieved in part by the addition of titanium conrods from the same supplier as for the F1 team and an ultra-high compression ratio. It’s not got a patch on the drama and emotion of an old naturally aspirated motor, but the torque allows you to work the chassis more easily and this actually makes the car more engaging at modest speeds.

And that’s the thing about the Pista – out on the road you’re not unduly punished for having one instead of a 488 GTB, or denied access to the more sedate satisfactions of driving at less than nine or ten tenths. So long as you remember to take the handbrake off before snapping on the four-point harness and don’t mind the aggravated pitter-patter of stone chips drumming the underside of the body, it’s a relative doddle. Which is incredible given the performance on offer. 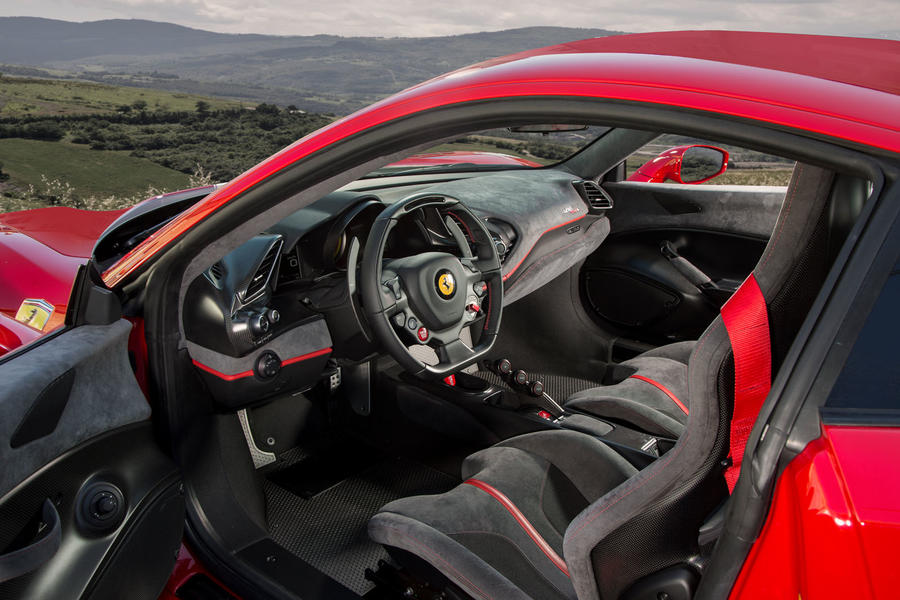 Maybe, if you can afford it. For a car whose name literally translates as ‘Track’, the Pista is extraordinarily coherent on the road, though the 488 GTB still makes better sense if only rarely will you book a slot on a circuit. Not only is the standard car usefully more refined but it also has that 230-litre front boot, which at some point you’re going to sorely miss in the Pista (down to a tiny 170 litres), however fantastical the scoop is.

But should the road-racer spirit prove too hard to resist, what’s the competition? A new Ferrari of this kind will always be compared to the latest offering from Porsche’s Renn Sport. Predictably, the GT3 RS isn’t as quick but feels no less special and costs half what a Pista does. On the other hand the big, bad GT2 RS – similarly turbocharged – is every bit as mind-bendingly rapid and perhaps even more involving, but for this tester is just too loud to get along with when you’re not really up for it.

Lamborghini A Huracán Performante? It hammers the Ferrari for drama, no question, but find a set of corners and the Lamborghini can’t hold a candle to its compatriot in chassis terms. Both lap up crummy British roads in a manner that has to be experienced to be believed – as does the new McLaren 720S Track Pack, which is the class benchmark when it comes to balancing usability and performance.

Assuming you could only afford one jewel of a supercar, such a talented field makes for a tough choice. But here’s the curveball. If you’re willing to trade a bit of the Pista’s cordiality and almost unnecessary pace for a 9000rpm naturally aspirated howl – and frankly who wouldn’t – then a 458 Speciale can be had for £300,000 through an official Ferrari dealer. Decisions. 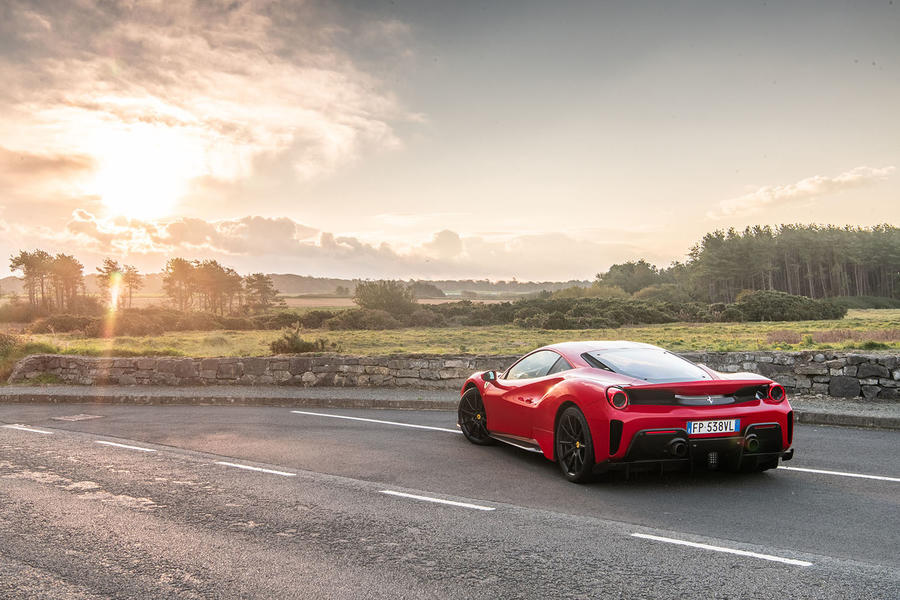 Ferrari needs to stop turbos and talk again to Pininfarina.

Good as it is on twisty roads

Not as good, probably. That's why extremely high performance cars are wide.

I used to love Ferraris, but

I used to love Ferraris, but over the last 20 years, the love has drifted further and further away.

It isn't just the miserable turbos and automatic boxes.

There is a coldness of spirit.

Couldnt agree more.....Ferrari's have become unbelievably tacky and yet sell better than ever which just goes to show how much 'new' money there is in the world today. Soooo taste and class went out of the window.

The only highlight , seeing tossers relieved of £8k for a pair of stripes!!