There are two sports cars they just don’t get wrong. Most manufacturers, even these ones, occasionally turn out a duffer, but in the case of two vehicles – the GT3 RS version of a Porsche 911 and the special series version of Ferrari’s mid-engined V8 – they don’t miss a trick.

This is, I suspect, because they’re engineers’ cars. Purists’ cars. The first 911 GT3 RS, of 2003, only came about because Porsche needed to homologate two suspension links for racing. And the first mid-engined Ferrari special, the 360 Challenge Stradale, also of 2003, helped justify the Challenge race series. And throughout their iterations since, they haven’t missed a beat.

This, then, is Ferrari’s latest, the 488 Pista. Pista means 'track' or, apparently, ‘get out of the way!’, but I suppose either is appropriate enough.

The requisite link to motorsport is there, anyway. The Pista’s engine is, like a GT3 RS’s, effectively a race car motor, here from the 488 Challenge car. It was always in the plan that way: develop an engine that makes 50bhp more than the standard 488 GTB's, prove it in the one-make racing series car and eventually drop it into the ‘special’ variant.

Special doesn’t mean totally limited in production number, though; the Pista will join the rest of the 488 range while it's still on sale, albeit at relatively low volume. It retains a 3.9-litre V8 but now makes 710bhp at the same 8000rpm rev limiter and 568lb ft at 3000rpm, but only in seventh gear; torque is limited in lower gears to make what, since its launch, has been the best sporty turbocharged engine in the world feel less turbocharged, more naturally aspirated.

It drives the Pista's rear wheels via a seven-speed dual-clutch automatic gearbox. Remember when these were first launched, and they told us that upshifts were effectively instant because one clutch would engage while another disengaged? Well, they’re still tweaking them. While the time between clutch activations isn’t being reduced much (there’s not much to reduce), there’s now an overboost on upshifts, and in the appropriate aggressive drive mode – a dial on the steering wheel scrolls through them – it punches downshifts in racier fashion, with more engine braking than before.

Specify the right options – including carbonfibre wheels at more than £10,000 – and the Pista can weigh as little as 1385kg (kerb, not dry). That's up to 90kg less than the 488 GTB. McLaren reckons the 675 LT is 1320kg at the kerb which, given that it has a carbonfibre tub rather than an aluminium structure, sounds about right.

The Pista does feature carbonfibre, though: for its bonnet, bumpers, intake plenum and rear spoiler. This is part of a raft of weight-saving additions that include an Inconel exhaust, a lighter flywheel, a lithium battery and titanium conrods. Among the bodywork modifications, which have shades of Ford GT – perhaps unsurprisingly, seeing as that’s a car entirely developed for endurance racing – there’s an S-duct at the front and a higher, longer wing at the back. The result is 20% more downforce than that generated by the 488 GTB: 240kg at 124mph, with only a 2% increase in drag.

The Pista's weight, power and aero, plus a newly developed Michelin Pilot Sport Cup 2 tyre (which leaves rubber on the road in rather more places than you’d realistically expect, so Lord knows how soft they are) mean that it's lighter, faster and more aggressive than the 488 GTB everywhere.

But it's not, says Ferrari’s leading GT engineer, Raffaele de Simone, any more difficult to drive. This is not a Ferrari like the F12tdf or 599 GTO, which you might kindly describe as a right old handful; it’s meant to be just as playful and accommodating as the regular 488 GTB, says de Simone, which, given that the GTB has 661bhp and is almost as docile as the Toyota GT86, would be quite an achievement, seeing as its output now starts with a seven.

But it turns out he’s right. This car – chuffing hell. 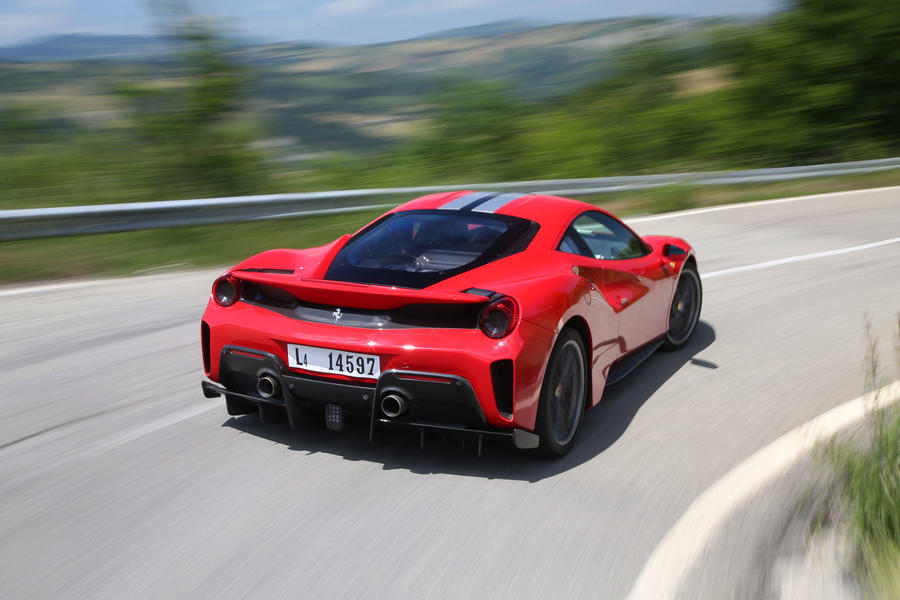 Our first go is around Ferrari’s Fiorano test track. The Pista is said to be two seconds faster than the 458 Speciale around here, which, given that the Speciale’s lap time is only 83.5sec, is a leap. The Pista in a different performance stratosphere from the Speciale: 0-62mph takes 2.85sec and 7.6sec to 124mph, compared with 3.0sec and 9.1sec for the Speciale.

But it doesn't take long to realise that the Pista is no more frightening than the GTB, but merely faster, everywhere. The steering rack, ratio, everything, is the same as the GTB’s. Anti-roll bars are unchanged, and while there is a stiffening of springs, it’s minor and only comes with a marginal decrease in ride height. The GTB’s friendly nature, then, is largely intact. In fact, because of the Pista's new tyres, which have stiffer sidewalls, steering response – Ferraris use a really quick, light, 2.0-turn rack, and McLaren and Porsche usually do it better – is if anything less nervous, more stable.

So it is just as accessible, but way, way faster. The reduction in kerb weight means that a car that was already willing to turn is now even more agile. Ferrari uses an e-differential, and its latest ‘side slip control’ program involves even more software, so if you turn in sensibly the diff stays relatively unwound, the Pista rotates beautifully and, as you come back on the power, it drives the car brilliantly, breaking traction easily if you have traction control off, but with the side-slip control system allowing a lovely degree of adjustability.

Turn everything off and the Pista’s character is still docile. Peak torque – 568lb ft of it – comes in at just 3000rpm, the car revs to the same 8000rpm as the GTB and throttle response is better than any other turbocharged car’s. So it’s just brilliantly adjustable and responsive.

What’s perhaps more remarkable is that this comes without any huge detriment to the experience on the road. Well, to the ride, at least: there’s a lot of road noise, owing to a lack of carpet and other soundproofing, so along with tyre road you can hear stones being flicked up and chattering into the body, while the air conditioning struggles on anything except its most shouty setting and the extended front and rear body addenda give you more than usual to think about on slopes and speed ramps.

But the dampers retain two settings and, even on the firmer one, the Pista is far from unsettled on twisty hillside roads. On the softer ‘bumpy road’ setting it’s remarkably compliant yet controlled.

The roads on which we drove the 488 Pista are part of Ferrari’s development drivers' test route, so you can see why the steering ends up being so fast – you seldom need to take your hands off the wheel on hairpins – but it also explains why Ferrari likes using an e-differential. It, while heavier than a pure mechanical differential or an open one (like a McLaren's), unlocks to ease tight corner entry and locks up to provide brilliant exit-straightening.

These roads would really expose some laggy, harshly sprung track specials, but the Pista is brilliant here, riding with deftness and cornering with composure and loads of feel and finesse. It’ll understeer if you’re clumsy and spin its wheels more than you expect if you’re lead-footed, but it’s generally more approachable and playful than its competitors.

And while its engine is less intoxicating than Porsche’s naturally aspirated 9000rpm GT3 RS unit and the Lamborghini Huracán Performante’s V10, it has the measure of the blocks in the 911 GT2 RS and any current McLaren.

More than that, though, it helps exploit one of the greatest chassis in the business. 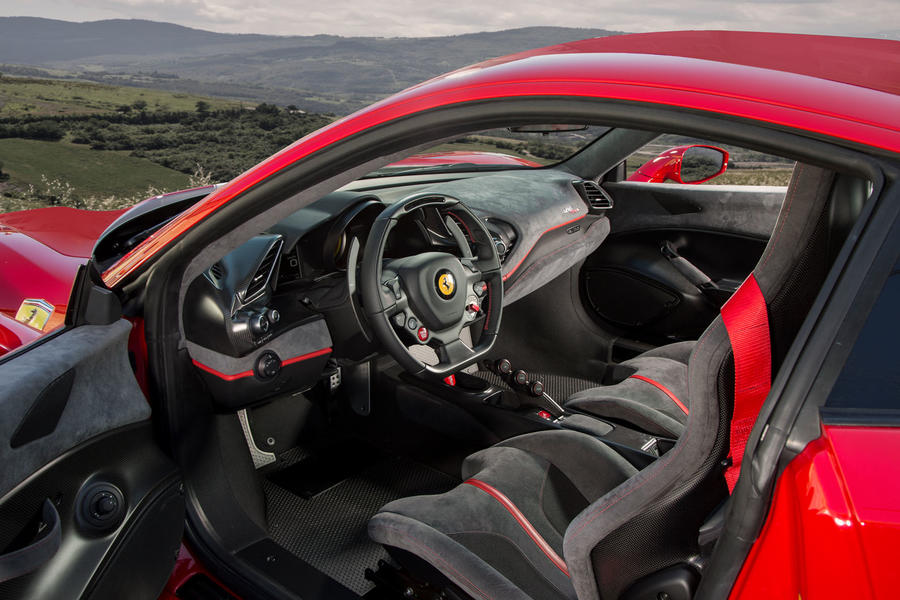 The Pista's chassis doesn’t feel night-and-day different from that of the regular GTB, which is a car that, for me, anyway, is still preferable to the McLaren 720S (although I’m in a minority on this website). This feels like GTB plus 20%, rather than a different animal. Put carpets and inertia-reel belts rather than harnesses in it and it could even just be the next 488, rather than a motorsport-derived special.

That, though, is important to those who buy them. V8 Ferrari owners, even track special V8 Ferrari owners, do not tend to live on race tracks like owners of, say, GT3 RS Porsches. They’ll go once or twice, just to remind themselves they’ve made the right decision. I imagine that won’t take long.

About three corners ought to do it. 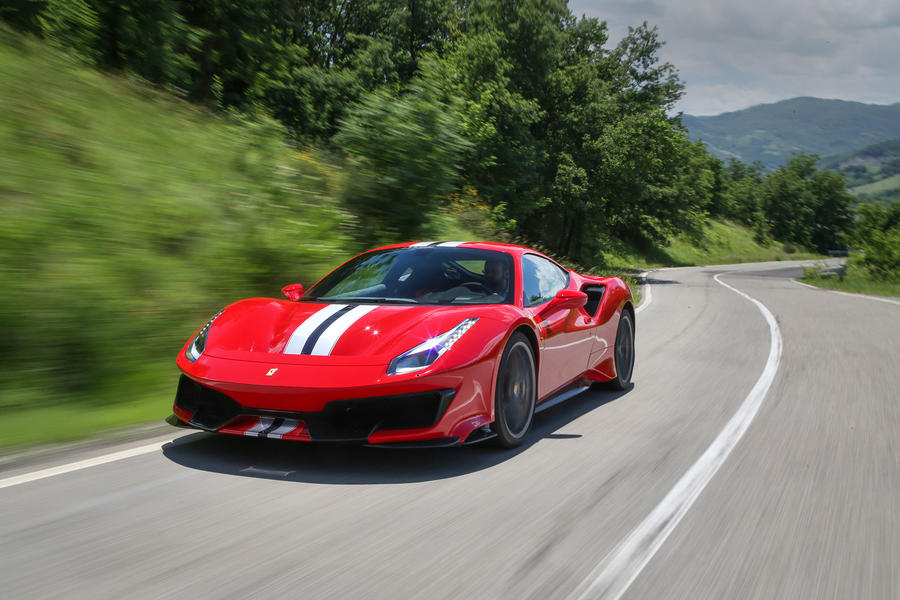 Over 10 grand for carbonfibre wheels? What fantastic value. I'll order several sets, in case the first set gets shagged by ferry or train width restrictors on my first trip to Spa....

And beautiful.
Note that performance thresholds are reaching their physical limits, the 0-60 time shows hundredths of a second.
jason_recliner 7 June 2018

And beautiful. Note that performance thresholds are reaching their physical limits, the 0-60 time shows hundredths of a second.