Can certain supercar makers get away with offering an engine that isn’t an event in its own right?

Undoubtedly, but Ferrari isn’t one of them. You might therefore have reservations about the 296 GTB, driven here for the first time in the UK. This is a car whose hybridisation and 250 LM-inspired design are big talking points but not the big talking point, which is the engine: never before has a mere V6 found a home inside an official Ferrari road car.

In cold terms, it represents something of a downgrade from the V8 configuration the company has used for its mid-engined mainstays since 1973. More to the point, when was the last time anyone gave us an outstanding V6, Alfa Romeo’s Busso aside?

There are other non-trivial concerns. Compared with the Ferrari F8 Tributo it indirectly replaces, the 296 GTB is 35kg heavier, despite its fewer cylinders. The steering has also morphed from electrohydraulic assistance (an attribute retained for the McLaren Artura) to electromechanical, which is generally regarded as being less feelsome. Because of the need to integrate the retardation potential of an electric motor at the rear axle, braking is now by wire, too.

Finally, unlike Maserati and McLaren, Ferrari still refuses to use a carbonfibre monocoque, which is something you might reasonably expect for £240,000 before even the box for £2880 upshift LEDs is ticked. On paper, all this leaves the 296 GTB looking less evocative than its predecessors; less Ferrari. Yet this is possibly also the most complete supercar ever made.

We say only ‘possibly’ because our test car – dolled up in Rosso Corsa and Baby Blue in tribute to the Maranello Concessionaires, take it or leave it –has the £25,920 Assetto Fiorano package. Along with some extra aerodynamic appendages, a lighter engine cover (made from polycarbonate rather than glass) and carbonfibre door cards, it brings the magnetorheological fixed-rate dampers used by the Ford GT and in sports car racing.

These are serious dampers, requiring serious speeds to hit their sweet spot, and otherwise give the 296 GTB the kind of sinewy, reactive ride that, if never outright brittle, feels only just on the right side of abrupt. Porsche 911 GT3 owners will know this level of intensity. However, GT3-ophiles aren’t able to opt for a softer suspension set-up. My hunch would be to leave Multimatic’s very special dampers in the box, although only another test of this Ferrari in its basic form will confirm the benefits of doing so. 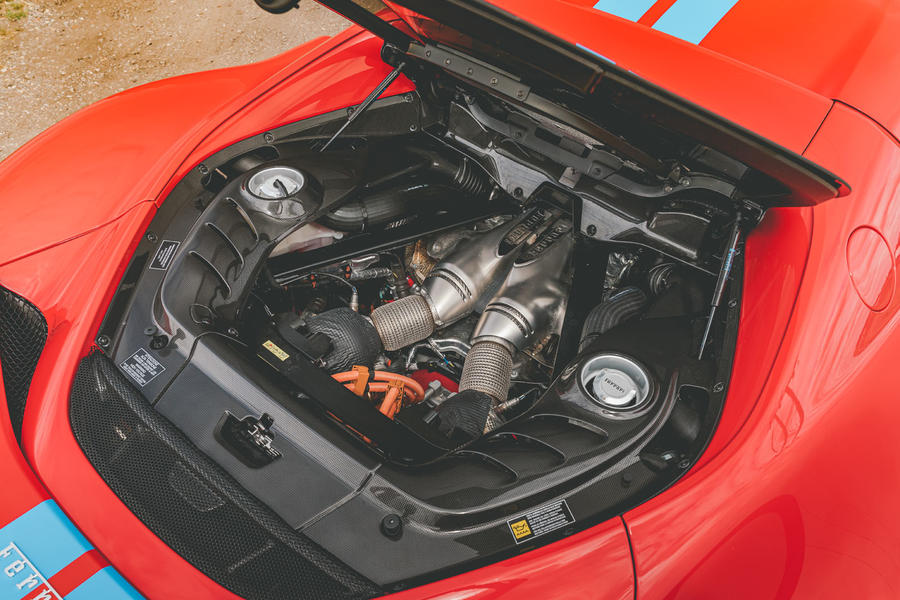 Now for the undeniably great bits, of which there are many, even in an environment far from the picture-perfect ribbons of asphalt enjoyed on the international launch in Spain.

Far from an intolerable disappointment, this wide-angle 3.0-litre V6, whose 180,000rpm turbos nestle between the banks for keener response and cleaner thermal management, is an utter peach. Start the car and it stays dormant by default, but explore the lightly sprung accelerator pedal or flick the powertrain setting from Hybrid to Performance (for engine-always-on driving; select eDrive for electric) and it wakes, initially in spine-tinglingly loud cold-start style, exhaust valves pinned open, wanting for no drama.

Alone, this compact V6 makes 654bhp at 8000rpm, but even if it made only 354bhp, I suspect you'd still fall for it. The juxtaposition of its crisp higher register with the pneumatic outbursts and barrel-chested mid-range of an engine heavily dependent on forced induction is unique. No other turbo engine gets so close to sounding naturally aspirated or, just as importantly, feeling naturally aspirated; although it still manages to make its turboness a virtue.

Electric assistance unsurprisingly means response is never less than clinical, and even from 2000rpm in fifth gear, the 296 GTB bolts forward. However, it’s the shape of the new F163 engine’s delivery and its aural performance thereafter that really let you understand why Maranello calls it the ‘piccolo V12’. Its character evolves in a similar way, finishing with a frenzied rush to 8500rpm.

Equal to this engine is the same dual-clutch automatic gearbox found in the Ferrari Roma and SF90 Stradale. Blistering redline upshifts are an event in their own right, yet lazy, in-traffic downshifts are generally just as deft. The paddles also have arguably the most engaging action in the business, should you toggle to manual mode and do it all yourself. It’s the finishing touch on an outstanding powertrain that integrates electrification with acute finesse but also an understanding that it’s only ever going to be the supporting act in such a car.

Actually, it can be more than that. The slim, 165bhp electric motor slotted between the V6 and gearbox represents a paradigm shift. Apart from the legislative breathing space that it gives Ferrari, there’s the fact that its efforts can be decoupled from those of the V6 via a dedicated clutch, allowing for electric-only running.

Charge for up to 15 miles of electric driving is supplied by a 73kg battery in the car’s floor, between the seats, although you rarely use it all in one go. Short, driver-prescribed stints are likelier, and for a certain sort of owner – one who has less to prove – the ability to unobtrusively arrive or leave in near-silence will be priceless.

However, the 296 GTB as an EV still needs polish. Lift off and the regenerative braking sometimes feels unexpectedly strong, and you also occasionally experience hiccups in the pure-electric torque delivery, apropos of nothing.

But now to the real question: how does the 296 GTB go down good UK roads? Well, to help you out, you have eSSC, ABS Evo, eTC, 6w-CDS, SCM and, who could possibly forget, FDE2.0. What it all boils down to is an electronically controlled limited-slip differential working with gyroscopes and sensors that all inform the behaviour of the brake distribution, power steering, traction control and stability control.

The aim – and part of this depends on which e-manettino mode you’ve selected – is to ensure that the car is always just the right blend of playful, agile and stable. Ferrari has been honing this ecosystem since the F430, and the result in the 296 GTB is fantastically no-bullshit. Fantastically fluid and intuitive, too.

The steering isn’t grittily involving, admittedly, but the gearing and weighting have been nailed. On smooth roads, the leading axle feels unusually soft, even by the standards of mid-engined cars, with their low front spring rates, only there’s no sacrifice in precision. The car, which to its credit never feels awkwardly wide or low, is joyful to guide this way and that and has all the delicate throttle adjustability that you would expect of something with double wishbones at one end and bags of torque at the other. 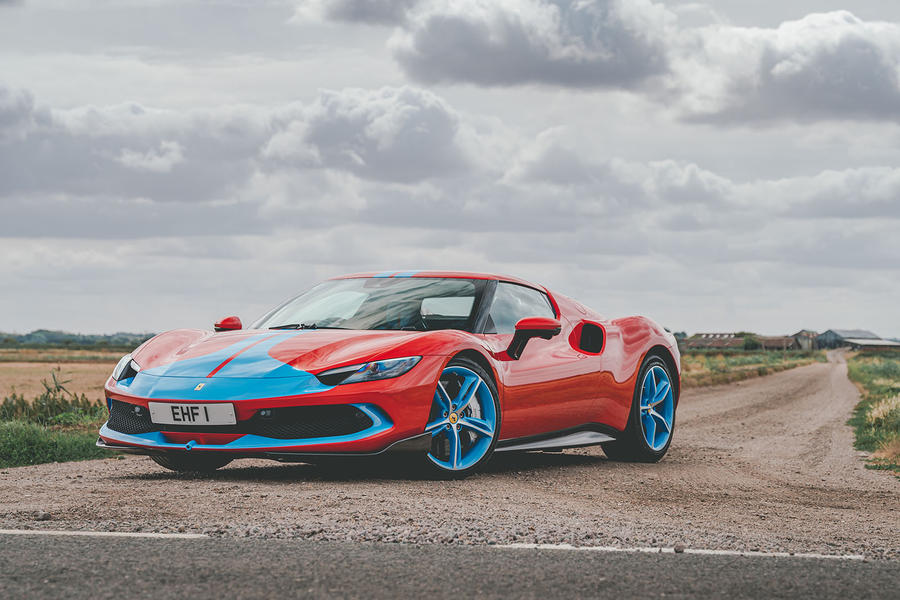 However, of equal significance to all that are the dimensions. The 296 GTB’s wheelbase is notably shorter than the F8 Tributo’s. In fact, you have to go right back to the 360 Modena to find a mid-engined Ferrari with axles quite so close together. This feels key to the car’s character: there’s natural, innate verve here, the car seemingly to shrink around you from the get-go. Best of all, and despite its towering performance ability, you can really have honest fun in the 296 GTB on the road.

Perhaps our car’s unusual specification helped in this regard. The Assetto Fiorano pack includes severe Michelin Pilot Sport Cup 2R tyres, but the 296 GTB before you wears a standard Pilot Sport 4S set. Limits of adhesion therefore lowered and Race selected to allow more chassis freedom, after some stabilising understeer through second- or third-gear corners, the back will squat and smudge its tyres ever so slightly out of line if you chase the throttle early. It will do it benignly, and in this way, it isn’t much unlike the Alpine A110, only with thrice the torque.

There are other excellent aspects of the 296 GTB that, although proasic, will make the car enjoyable to own. For one thing, visibility is superb – not quite McLaren-esque in terms of the view forward, because the scuttle doesn’t cut quite so low, but close. However, the flat engine cover and panoramic breadth of the rear screen make backward visibility class-leading, and the GTB is easy to punt around town, reverse park, and generally manoeuvre in a fashion conducive to steady heart rates.

This contributes to what’s an intimate but in no way claustrophobic cabin and one that, were it not for our overly firm carbonfibre race seats, would be well suited for long drives. And on the subject of touring, the front boot is also more capacious than that of the F8 Tributo. So here’s an 819bhp mid-engined Ferrari that you can drive every day, take on holiday, fire down your favourite B-roads – whatever you like, within reason.

Worried about the PHEV takeover of the supercar class? Don’t be – certainly not on this evidence. The electric element of the 296 GTB’s powertrain only ups its usability and, yes, perhaps even brings net dynamic benefit in the real world.

Equally, you need not fret that Ferrari has migrated to V6 power for what will be, with the probable exception of the Purosangue SUV, its best-seller. Aside from the V12s, which will continue to exist for some time yet, this is the best-sounding and most spirited engine since the 458 Italia’s naturally aspirated V8.

Altogether, the 296 GTB is an exceptionally good supercar, and the head-to-head with the Artura will be something to savour. 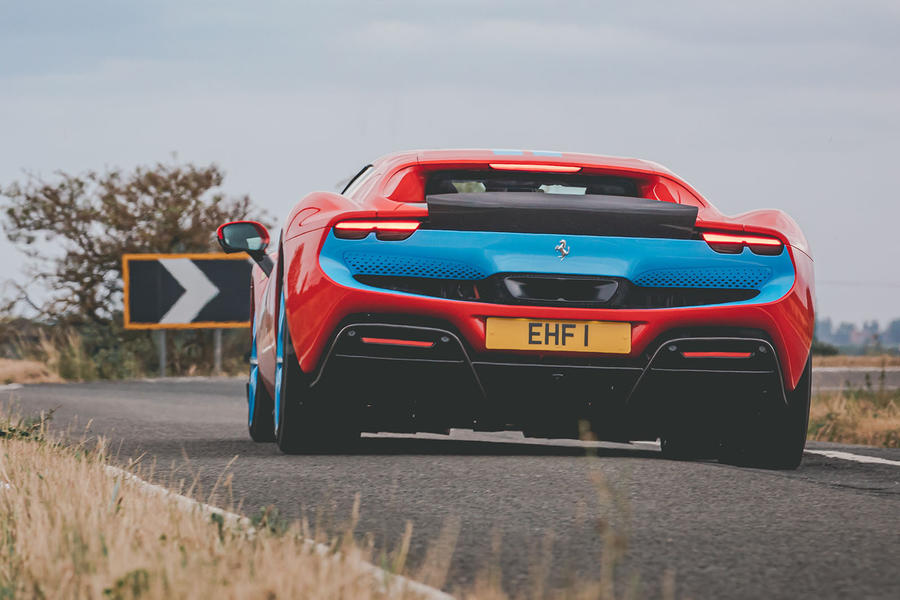 What a pity Autocar refused to provide us with acceleration figures for the Ferrari 296 GTB.

Is it too much to ask for an 8 page full test at some time in the future?

Just Saying 6 August 2022
Flt158
The drop down feature was working with the additional stats.
0-100kph 2.9
Cobnapint 5 August 2022
Will look good on the local council estate with all those different coloured panels.
Bob Cholmondeley 5 August 2022

The PHEV addon looks like just a box ticking exercise to keep regulators happy, it's not much use for anything else. Aesthetically, the size of it, plus the questionable paintjob of this press car, shows the market they are aiming at now, loads of money, no taste, just want soemthing to impress their rich, chav friends.