Whenever we enthusiasts talk about special cars, we seem to concentrate first on what it is and what it costs. Only after we’ve found and financed the car of our dreams do we come to the biggest question of all: what on earth made us buy this machine in the first place?

Naked, long-held desire is the major driver, of course, but where does that come from? For the dozen or so people who run Bell Sport & Classic – a kind of outer-London nirvana for buyers and lovers of the world’s greatest cars – the answer has always been obvious. People buy special cars for the life experiences they provide: great driving, supremely enjoyable travel to destinations that suit cars of this type, plus the chance to mix with like-minded people who have such cars of their own. Perhaps, further into ownership, there will also be a chance to improve a car and upgrade it: only a very few odd souls buy a Ferrari to deny it the light of day.

Bell S&C is strategically located in rural Hertfordshire, in purpose-built premises opened in 2017 to cater for the progressive expansion of a business that started with lower-end classic cars in 1989. The new HQ at Markyate sits in a kind of green haven between Luton and Dunstable on the northern side, and Hemel Hempstead and St Albans to the south. Junction 10 of the M1 motorway is nearby, although you wouldn’t know it, especially when the large gates to Bell’s estate close behind you and its green lawns beckon as an ideal place to park whatever you’ve brought.

Of course, this is first and foremost a car dealership. It’s mostly a supercar emporium these days, although you can also buy the likes of a Triumph TR4A or an ex-Academy Caterham Seven. And if you were to go there at present, you’d probably get to park beside a huge, £250k Lamborghini LM002 off-roader that’s just been restored on the premises (“it arrived in boxes”). You don’t do that kind of thing every day. 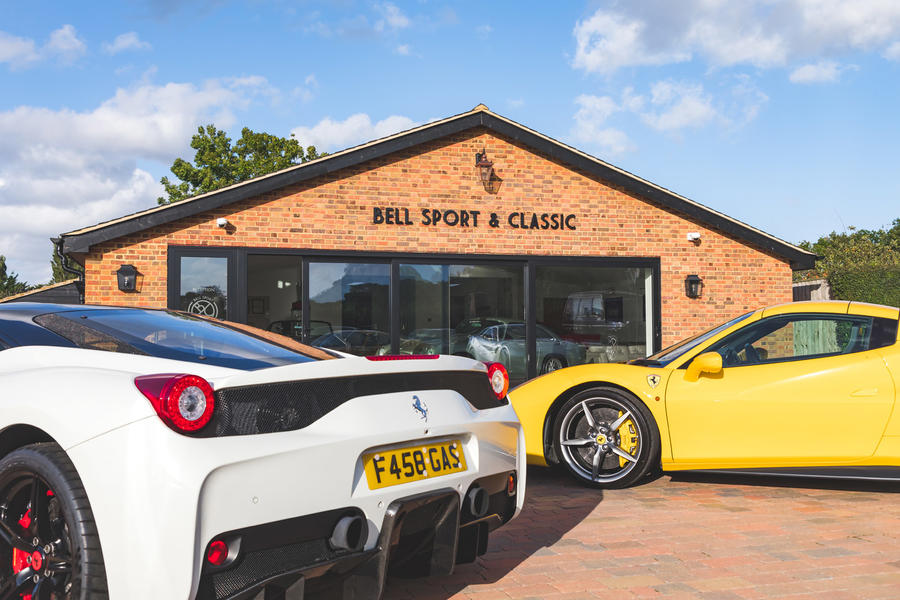 Developing this place as a welcoming destination for a lot of car talk and a good look around has become a labour of love for the people who run it: this is one of the few businesses you’ll encounter whose website prominently displays these remarkable words: “Drop in whenever you want.”

Most Bell people are greatly experienced from previous careers in the business and their mission is to use the knowledge and contacts to make the customer experience better than anything they knew in the past. It’s quite a goal. They like running events, too. Breakfast and coffee drop-ins are a speciality and a recent series of drive-in movies attracted hundreds. More are planned.

“We usually find visitors stay longer than they expected to,” says Bell’s managing director and kingpin, Tim Kearns, who took charge a couple of years ago. “Visitors pop in and can often still be here five hours later, but that’s how we like it. We do get the odd ‘where are you?’ call from disgruntled other-halves but that’s a hazard of the job.”

Kearns has had more than 30 years in the fast car business, first achieving prominence in the HR Owen South Kensington Ferrari dealership (at which, back in the noughties, he handed over Autocar’s fondly remembered F430 long-termer). He subsequently rose to boardroom level and assumed responsibility for Ferrari, Maserati, Lamborghini and Rolls-Royce sales across the group – until a new owner brought fresh ideas and new faces. After that, he orchestrated a big-scale dealer launch in Bristol and toyed for a while with opening his own Ferrari dealership before being headhunted to give Bell S&C a new lease of life. 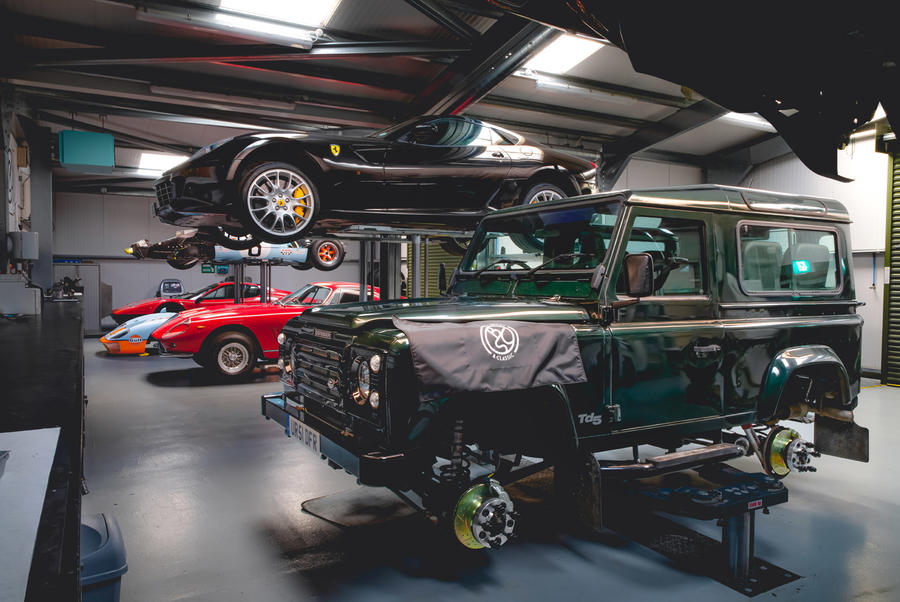 Bell takes its name from engineer and entrepreneur Peter Bell, who back in the 1960s used his £5000 redundancy money from a printing job to establish himself in the automotive parts business. He first launched the stick-on rear window demister (remember those?), then came up with a better design for a stable, leakproof petrol can, first in metal and later in the plastic that made his fortune. He did so well that he was able to sell the business to a bigger parts player and start Bell Sport & Classic, which traded first in MGs and Healeys but then moved more upmarket. Nowadays, as the website succinctly puts it, “we sell the cars we’d love to own”.

Kearns is slightly surprised at how much he’s enjoying running a non-franchise car business. Agility is one major advantage over the majors, he says. “The staff of the big gin palaces have very little time to improve their ambience or spend much time with customers,” he says. “Process is the enemy. It gets in the way at every turn because there’s way too much of it. We just don’t have that problem.”

Bell’s compactness doesn’t prevent it from completing complex work to an extremely high standard, though. Kearns nowadays presides over a business that can faithfully maintain or repair any of the cars it sells, and it frequently completes big-note restorations to standards he believes match or exceed those of Ferrari’s Classiche dealers.

Kearns proudly shows detailed pictorial records of its best work (“we’re sticklers for authenticity; when you restore a car, you’re responsible for recapturing its original personality”). Its small but talented artisan staff, led by the experienced Attilio Romano, especially welcome projects like the big Lambo that require “talent, patience and desire”. A secret 1960s Ferrari project, biggest of the lot so far, will soon be revealed. Meanwhile, the craftspeople themselves are every bit as well known to customers as the front-office staff. 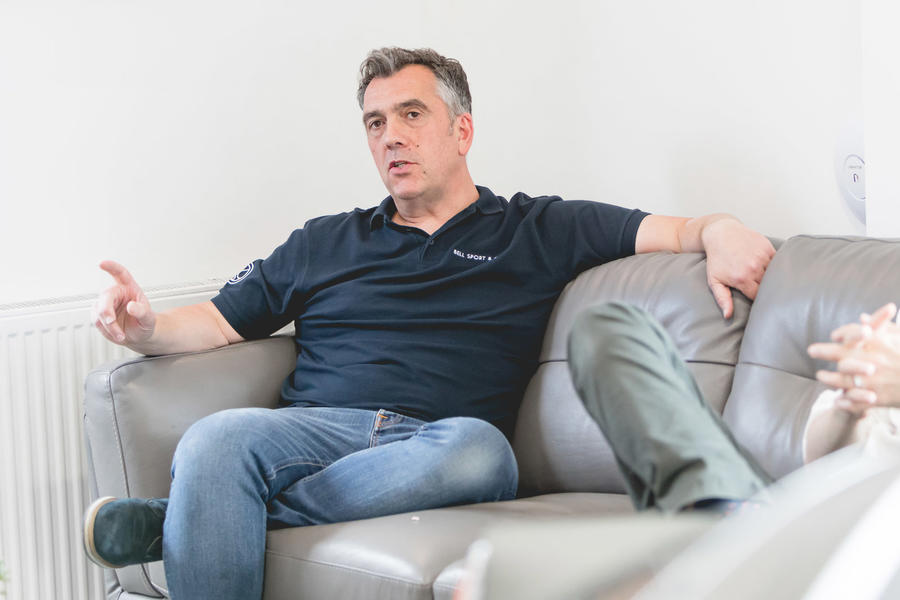 But at the heart of everything is a car dealership: are Kearns and staff concerned, in this Covid-19 era, about any impending market downfall? Not greatly, it seems. “Great cars will always do well,” says the MD. “It’s the cars that assumed greatness when the really important ones weren’t available that are suffering a bit. And there could be more difficulties ahead for those, though we don’t foresee anything disastrous.

“Our advice to customers is to cut right through the value thing. Buy the best example you can of something you love, and whatever the market state, you’ll never regret it.”

The great cars that will become future classics