From £29,8808
Fast, potent and characterful SUV puts a strong focus on driving thrills but is lacking in ultimate composure
Open gallery
Close

Six months after the launch of the Formentor, Cupra has crowned its first stand-alone model line with this, the turbocharged 2.5-litre five-cylinder VZ5.

With 385bhp, it is Cupra’s most powerful SUV yet. This compares with the 306bhp of the turbocharged 2.0-litre four-cylinder engine used by the VZ 310, up until now the most potent of an extended range of petrol, diesel and plug-in hybrid Formentor models from the Seat-operated brand.

Cupra says production of the VZ5 will be limited to just 7000 units – all in left-hand drive. That’s not deterring the firm from offering the new model in the UK, though, where it will be available through selected dealerships for orders on a limited basis  later this year.

A number of subtle styling changes help to visually differentiate the headlining Formentor from its less powerful siblings. These include a restyled front bumper with a more pronounced carbonfibre splitter element and wider wheel-arch flares all round.

At the rear, Cupra has fitted its flagship with a new lower-bumper assembly that features a uniquely styled diffuser, quad tailpipes with two exhausts stacked atop each other at either side, and VZ5 identification on the tailgate.

The VZ5 also comes as standard with uniquely styled 20in wheels and receives upgraded brakes developed by Japanese specialist Akebono, with six-pot calipers acting on 375mm steel discs at the front and new single-pot units at the rear.

Inside, there is a model-specific steering wheel and heavily contoured sport seats, together with new trim elements in Cupra’s trademark copper colour, among other subtle changes in an otherwise impressively equipped and smartly styled cabin.

The VZ5’s driveline is closely related to that of the upcoming third-generation Audi RS3. Together with the transversely mounted five-cylinder petrol engine, it brings a standard seven-speed dual-clutch gearbox with steering-wheel-mounted shift paddles and a newly developed four-wheel drive system with a so-called Torque Splitter that uses two differentials at the rear to provide torque vectoring across the rear axle.

Cupra says the VZ5 can deploy its reserves faster and more intuitively than the VZ 310, which uses an older, Haldex-derived system. The key to the developments brought by the Torque Splitter is the ability to apportion drive individually to each of the rear wheels in a process similar to a mechanical locking differential. This has allowed Cupra to provide it with a Drift mode. One of five different driving modes, it can be called into action once the three-stage electronic stability control is switched off. The other drive modes are Comfort, Sport, Cupra and Off-Road. There’s also an Individual setting to allow you to tailor the car to your own particular taste.

Predictably, the Formentor’s chassis has been retuned to help it cope with the added reserves. The MacPherson strut front and four-link rear suspension receives a 10mm reduction in ride height compared with other Cupra Formentor models. There is also greater negative camber to the front wheels, and the springs and dampers are described as being unique to the VZ5, too.

Dynamic Chassis Control with adaptive damping is standard. It operates in combination with a so-called Integrated Chassis Controller, which networks the mapping of the throttle, gearbox, steering and dampers. 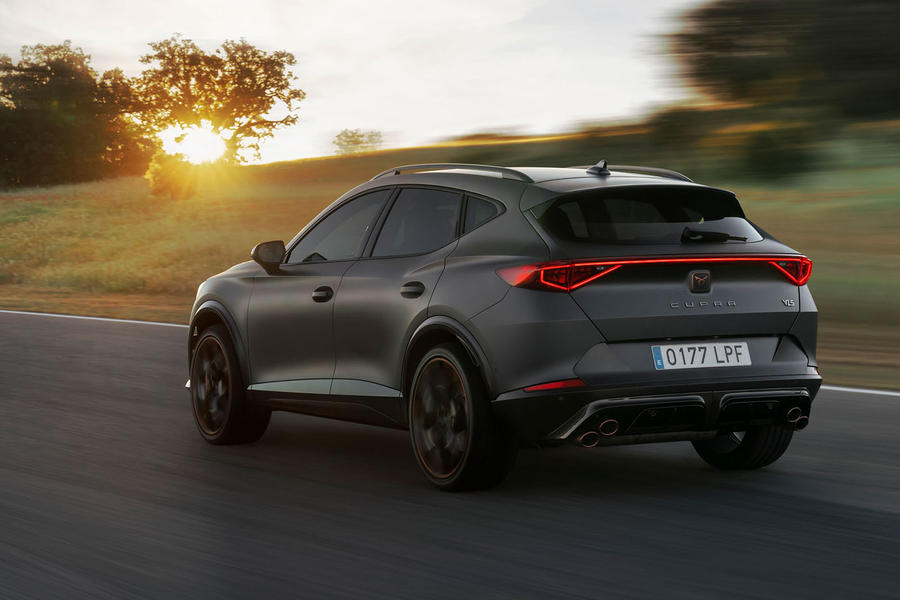 The sporting intentions are clear from the outset, not least in the ride, which is quite firm even in the more forgiving driving modes. It’s the engine more than anything that moulds the driving character, though. With 354lb ft between 2250rpm and 5700rpm, it allows you to cruise at low revs in taller gears around town with engaging flexibility and a suitably distanced exhaust note in Comfort mode, making the new Formentor model suitable for everyday driving on smoother roads.

Switch into Sport or for even more potent performance to Cupra mode and the VZ5 delivers explosive acceleration along with a truly memorable soundtrack, including the odd pop and crackle of exhaust on the overrun.

The five-cylinder engine is as brawny and muscular as its power and torque figures suggest, providing great urge at the bottom end and a hugely robust mid-range. It always feels a good deal more eager than the four-cylinder used by the VZ 310. Despite having a single turbocharger, the delivery is quite linear and it remains eager all the way to the 7000rpm ignition cut-out, which is indicated by a series of lights within the digital instrument display.

The dual-clutch gearbox provides fast and crisp upshifts, although it is sometimes a little slow and hesitant on downshifts. Cupra claims 0-62mph in 4.2sec, which is 0.7sec quicker than that achieved by the VZ 310, in combination with a launch control function. It’s also 0.3sec quicker than the Audi RS Q3, which uses a 394bhp version of the VZ5’s engine. Top speed, meanwhile, is electronically limited to 155mph.

Despite its pace, there’s more to the new Formentor than sheer straight-line speed. The VZ5 also delivers the sort of assured handling to match its rapid acceleration. Its point-to-point potential over challenging roads is really rather special and very much a key attribute.

The progressive steering lacks for ultimate feel, but it is very direct in its action, giving the range-topping Formentor particularly sharp turn-in in Cupra mode. The reduction in ride height and firm damping ensure that body movement is well controlled when the VZ5 is loaded up in corners. There’s considerable grip from the standard 255/35 R20 tyres, allowing you to carry a good deal of speed up to the apex.

The ability of the Torque Splitter to not only apportion drive between the front and rear wheel axles but also provide an individual amount of drive to each of the rear wheels endows the VZ5 with great traction and instills the driver with great confidence on challenging roads. It also gives the most powerful Formentor a good degree of adjustability. Take it to a circuit or a skidpan and you can drift it to your heart’s content.

It’s high on dynamism. But there is a price to be paid for the heightened handling. On smooth roads with its adaptive dampers set to Comfort, the VZ5 delivers an acceptable level of compliance. However, the ride deteriorates quite dramatically on less forgiving surfaces. Despite the inclusion of Dynamic Chassis Control and adaptive damping, there’s a lot of sharp vertical movement, and the performance tyres generate a fair amount of noise, spoiling the otherwise acceptable refinement.

Inside, the driving environment is very impressive, almost Audi-like in the quality of materials and overall design. Don’t expect loads of space, though. Head room in the rear is compromised by the curved roofline and the 420-litre boot capacity isn’t as generous as some rival coupé-like SUVs. 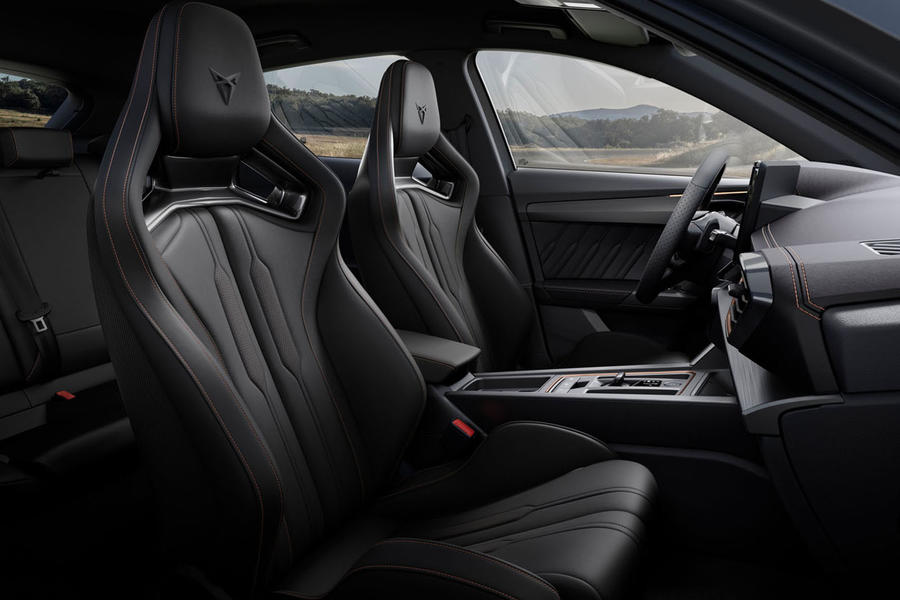 If you’re in the market for a sporting SUV and performance is among your primary criteria, the Cupra Formentor VZ5 is certainly worthy of consideration. Its five-cylinder engine gives it a rich character and an exhilarating turn of pace, while its newly developed four-wheel drive system endows it with a high level of dynamism and point-to-point agility.

What it is lacking, though, is true composure. A firm suspension does it no favours when the road is less than smooth. It’s also left-hand drive only, which won’t be to everyone’s liking. Pricing has yet to be announced, although with the VZ 310 costing £43,840, it is likely to be a £50,000-plus car in the UK. 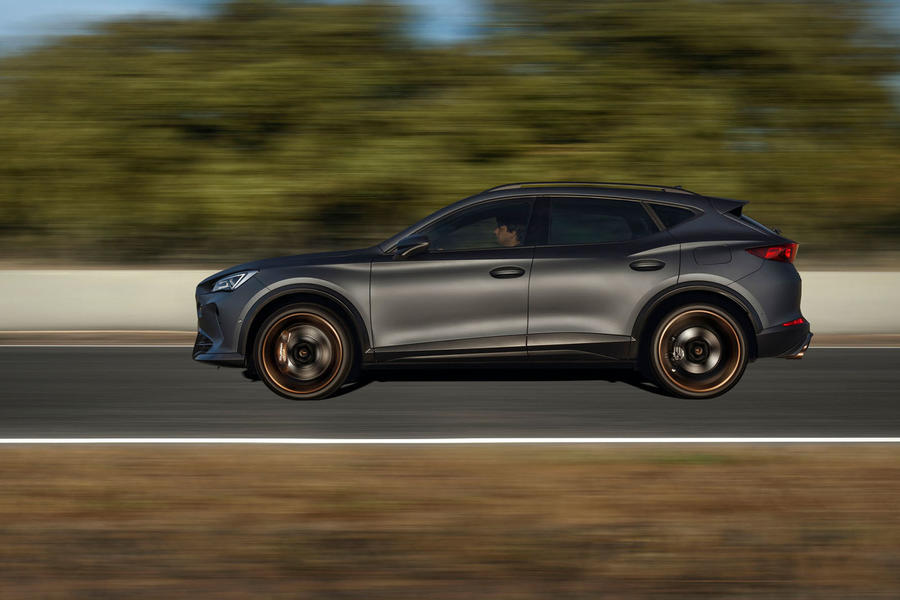 BlahBlah43 9 July 2021
The VAG parts bin interior of all black is depressing. Not sure who thinks fwd based platforms are "luxurious" or "sporty". The five cylinder is great, but destroyed by regulations
superstevie 8 July 2021

Shame they aren't bothering with RHD