BACK TO ALL TOP 10s
Currently reading: Top 10 best performance coupes 2022
UP NEXT
Pick-up trucks

Huge performance, enthralling dynamics and a swooping, delicious shape are all hallmarks of a performance coupé. We pick our top 10 currently on sale
Open gallery
Close

The recipe for a performance coupé is simple: take one good-looking coupé, give it a more muscular look if it needs one, make the dynamics sharper, drop a powerful engine in the nose and aim the performance figures for the stratosphere.

The hot versions of these slick-looking coupés each exhibit their own exhilarating traits, making them unique to own, drive and live with. The appearance in this list of some of the usual suspects may not come as a surprise, but the big question remains: who can reign supreme in our top 10 out of Mercedes-AMG, BMW M and Audi Sport, and one or two others?

The Mercedes-AMG C63 S Coupé is endowed with so much power, sinewy good looks and handling attitude that it’s hard not to fall adoringly under its spell. It becomes harder still when you realise that this will be the last AMG C-Class of its kind with a V8 engine, with four-cyliner hybrid power in line for the next one.

The C63's twin-turbo 4.0-litre V8 may not have the overall charm of its forebear’s normally aspirated 6.2-litre V8, but the way the 503bhp engine makes you cycle through adjectives – easy-going, enjoyable, enthralling, exhilarating - as your toe journeys toward the bulkhead is something else.

An Audi RS5 might be flashier, the new BMW M4 more precise and rounded, but neither can match the overall appeal of Merc’s perfecting of the traditional big-bonnet, big-hitting coupe blueprint. 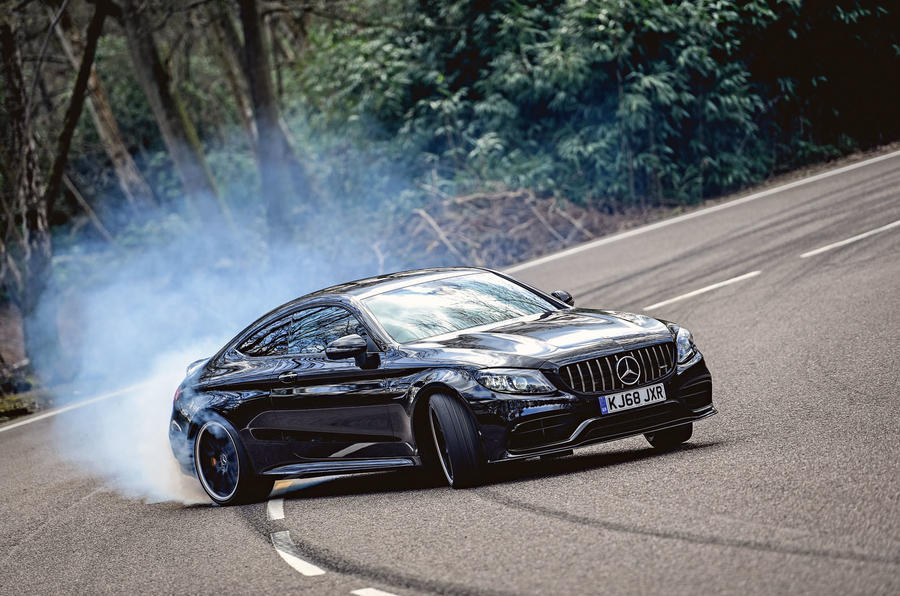 Having replaced the regular M2, the M2 Competition is now the baby in BMW’s magnificent M division line-up. But don’t let its junior status fool you into thinking that it’s a mere facsimile of the larger, faster M3 and M4 models: it’s far from it.

Truth is, this is the best driver’s cars BMW now makes (which is something we never really felt we could say of its non-Competition predecessor) and it would rank highly despite the whiff of relative subordinacy that it carries in this company.

Central to the M2 Competition proposition is the engine. The old car’s single-turbo six-cylinder unit was ditched in favour of a detuned version of the G80-generation M3’s twin-turbocharged straight six. That’s certainly not a change to be sniffed at. Modifications to the chassis and suspension also ensure that the M2 Competition is now a sharper, more focused and more agile machine that before.

It’s a supremely balanced and composed car, this; one that takes to the task of being ragged on track with as much sidewindow-first enthusiasm as it does to a blast down a battered B-road. Keen drivers will not be disappointed, so let's hope the M2's upcoming replacement doesn't disappoint. 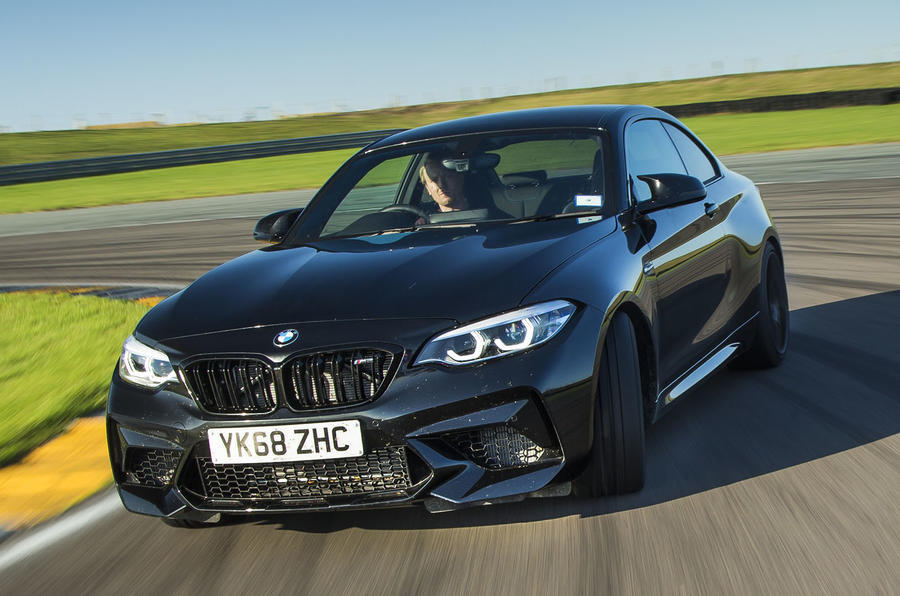 Early M4s of the old generation felt wayward and loosely controlled at the rear axle, which, combined with a shortage of traction, made them spiky and nerve-wracking to drive at times. However, each subsequent version improved the package, and while the late Competition variant didn't quite hit the spec-sheet heights of GTS or CS-badged specials, it is a more composed and predictable car to handle on the limit of grip than the M4 once was. It is also an excellent sports coupe when measured against any of its rivals, and arguably one of the best fast BMWs to date.

Now we have an all-new M4. It's considerably more powerful and heavier than the old F82 car, and also, you might think, quite a bit gawkier, at least from the front.

The M4 remains a compelling proposition, however. It offers striking and tangible handling poise, fine precision and superb controllability, along with trademark M division positivity of feel flowing through its axles, driveline and engine and back through to its controls.

So it's indulgent to drive but also more usable than ever, and the way the configurability of its driving experience can be negotiated via the steering wheel-mounted driving mode shortcut toggles is truly rare in a modern performance car driving experience: complexity brought emphatically to heel.

Perhaps it lacks a certain rawness, but its blend of versatility and engagement makes it a stand-out option. 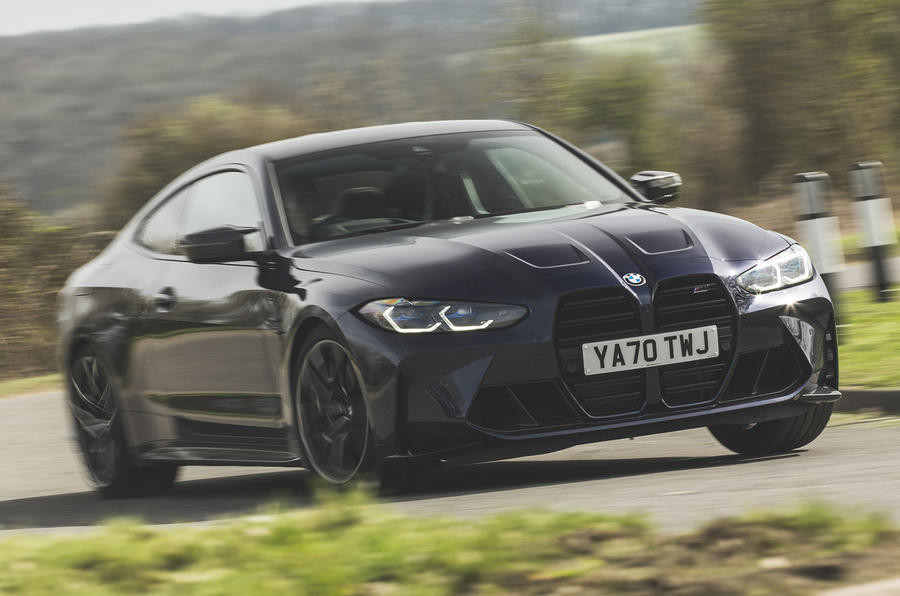 In truth, this car is no longer on sale, but given that the upcoming Alpina B4 will be available only in four-door, Gran Coupe form, we're minded to keep the superb two-door coupe of the previous generation on this list a while longer.

Whereas the F82 Alpina B4 always felt undeniably rapid, the B4 S coupé that replaced it in 2017 was a serious high-performance machine. It wasn't the power (up 30bhp to 434bhp) but that additional torque (hiked by more than 10% to 486lb ft) that provided real-world performance a clear step ahead of its predecessor's.

It’s a softer car than the old M4 (and by extension of that, also the new one) of which it's a sort of estranged sibling, and there’s a price to be paid in body control through very fast corners and over undulations, but it never feels nervous, as an F82 M4 sometimes can. We’d bet the smiles of its driver would be greater, too, even if it’s ultimately not as fast around a track.

What sells the B4 S is its character and it's laid-back usability. It’s a classy, charming car. There’s nothing quite like it in the class, and with the next B4 being Gran Coupe only, the class will be poorer for it. 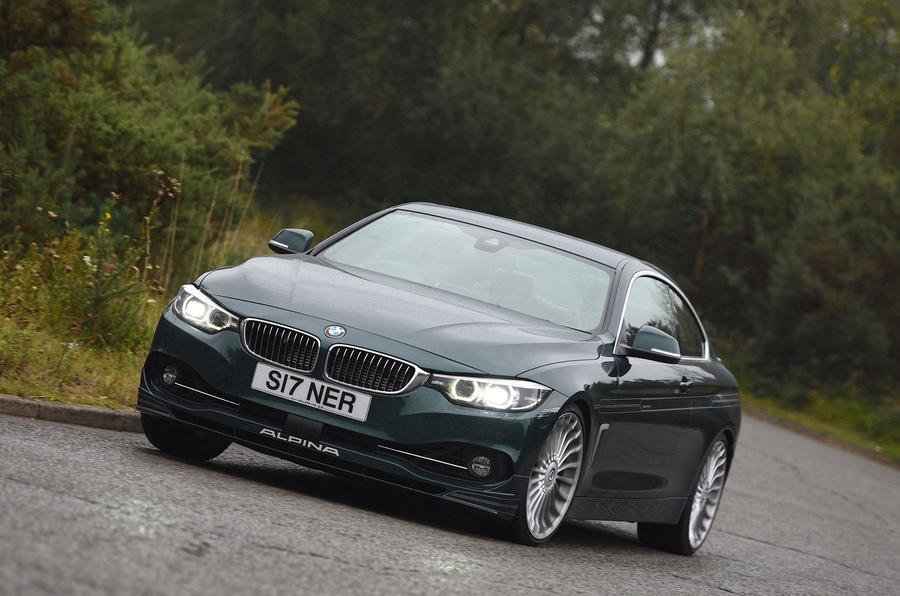 Yes, another BMW product at the sharp end of our list, though this time one that is brand-new underneath its controversial skin.

With its beefy kerb weight and new torque-converter gearbox, to replace the old DCT – the M440i is top-dog in the sub-M 4 Series range, and boy is it worthy of that status, at least from behind the wheel.

Unlike the hard-egded M4, this is a car that begs to be used every day, but whose chassis still rewards the driver like few others can, should you find yourself on the right road at the right moment.

Available only in four-wheel-drive guise, the M440i's turbocharged straight-six makes 369bhp, which is more than enough to reveal the car's playful side, albeit within the context of a very stable and secure overall handling complexion.

Better still, the M440i has excellent GT qualities in its locker, being long-legged, refined and luxurious. 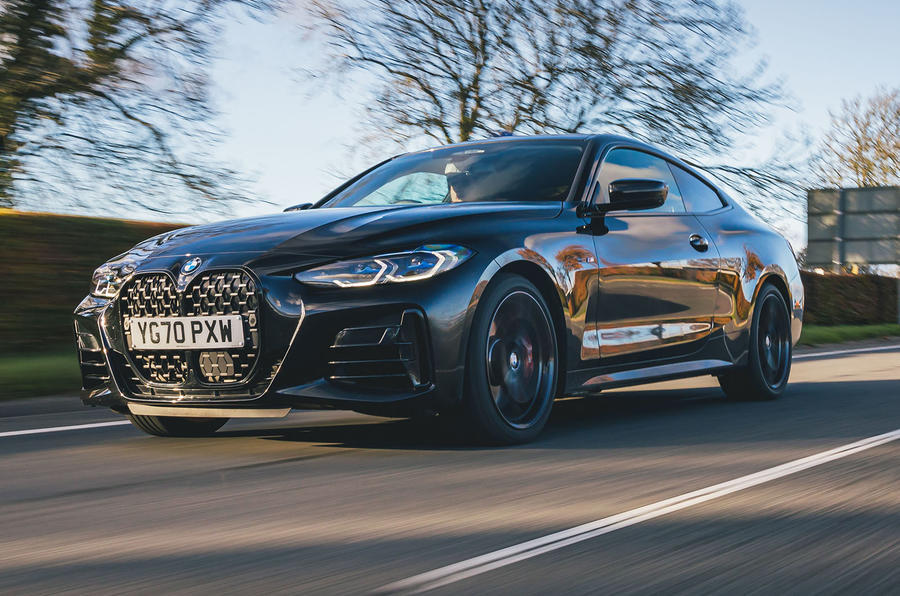 The Lexus RC F is an important step along the road for a young performance brand and adds much needed variety to this part of the market. It has been created with no shortage of budget, effort and commitment. It’s fresh, bold and different, and it’s pleasingly unreserved and true to its purpose – an easy car to like.

The RC F isn’t quite so easy to justify, though. As effusive as the car’s V8 powertrain can be, it can also be underwhelming and even frustrating at times, partnered as it is to a mannered automatic gearbox of rather too many gear ratios. The chassis spec also makes dynamic promises that the handling fails to fully deliver on.

It’s big on charm and bigger still on V8 noise, then, if a little short of real-world pace and well-rounded cruising manners. 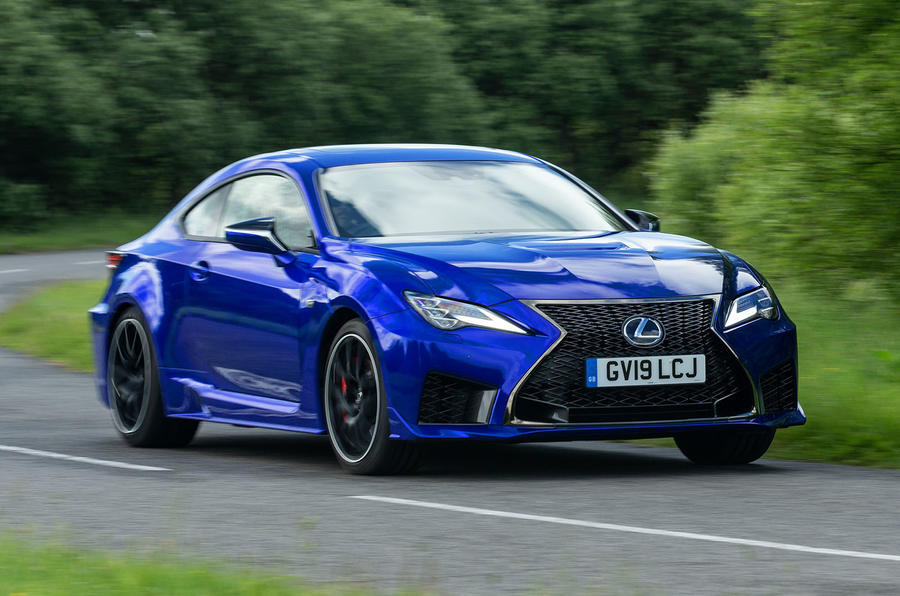 For this money, the sensible thing to do would be to buy an Audi TT or a BMW 2 Series Coupé, wouldn’t it? And if you did, that would be a huge shame.

Yes, this car does have significant drawbacks in the UK. Yes, you do have to think twice about where you’re going to park it in town, as well as factor in the far greater number of visits to the fuel pump than your peers will make. But no other car at this price – or several price points higher – can do what the Ford Mustang does.

Its powertrain brings with it an appeal that engines with fewer cylinders simply cannot and its inherent chassis balance is absolutely peachy. Go for the range-topping Mach-1 version and you'll get a car with proper V8 power and combustive character, as well as significantly enhanced road-holding and brimming with visual presence, for less than £50,000. Sensible be damned. 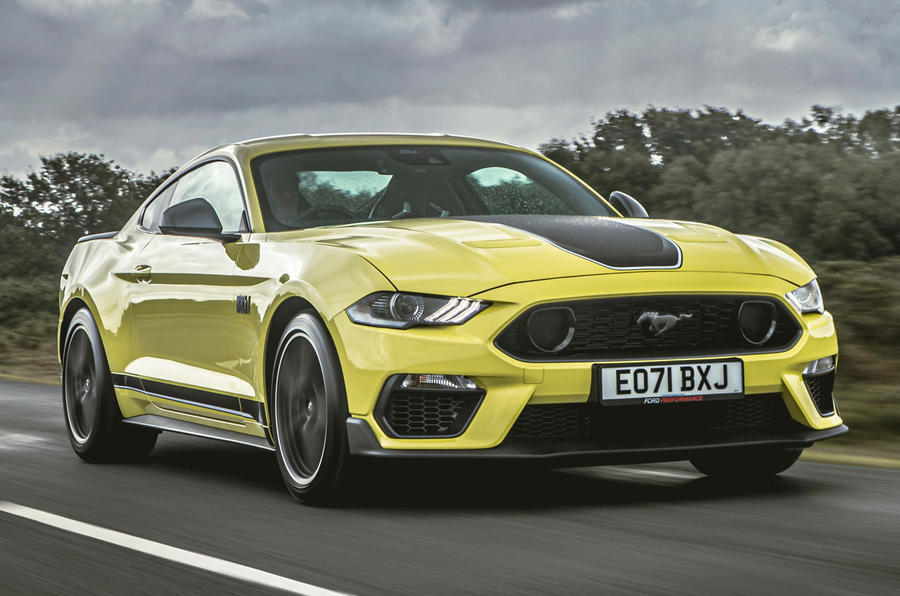 Recently facelifted, the flagship E-Class Coupé comes equipped with a 429bhp, 384lb ft turbocharged straight six in its nose - which is supplemented by a 21bhp and 184lb ft starter/alternator motor. The E 53 Coupé therefore boasts a suitably rapid, and impeccably smooth, turn of pace. It’s a rich, mellifluous motor, this, if not quite as raucous as the full-fat AMG V8; but it counters with a not-insignificant amount of socially responsible hybrid-electric intrigue.

Its ride may be a touch on the firm side, but it still makes for a convincing long-distance cruiser, and it handles with enough conviction to satisfy an interested driver. It’s a luxurious place to spend time, too, if one that’s a little light on AMG-related paraphernalia. 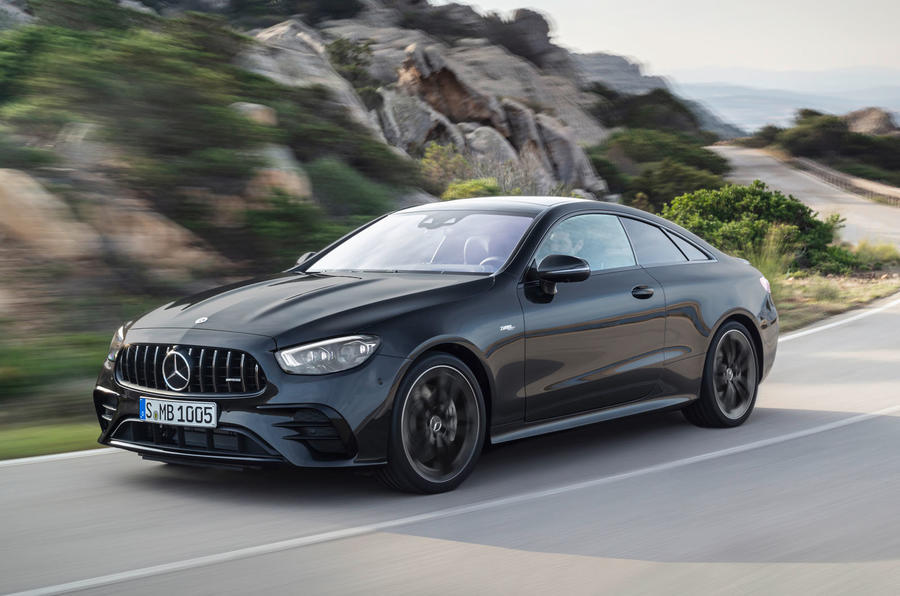 The best reason for buying the old Audi RS5 previously was to access the last resting place of the Audi 4.2-litre V8; a reason now manifestly gone. The twin-turbo V6 that replaces it no longer dominates the driving experience.

Any deeper appreciation of the new RS5 rests on a preference for the model’s tactful repositioning. Dig the monster GT vibe, and the car’s established gifts for interior splendour, technical prowess and sharp-edged looks start to make considerable sense.

Seen from this alternative vantage point, which has almost nothing to do with the hard-charging handling flair and dynamic exuberance that exemplifies its rivals, the RS5 simultaneously appears limited and perhaps more appealing than it ever has. 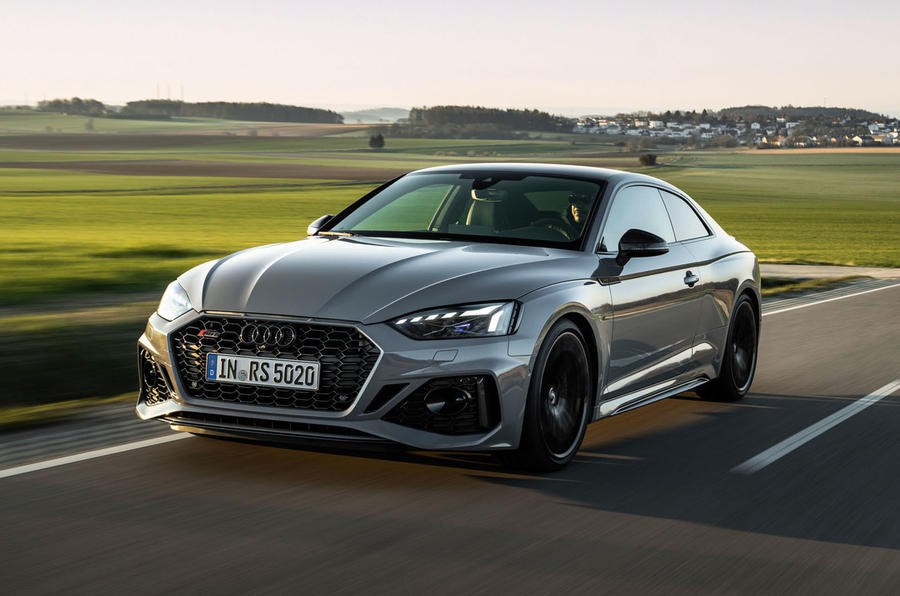 Although the C43 might be considered an AMG-lite by some, Affalterbach hasn’t merely added power to its twin-turbo 3.0-litre V6 and said: "That’ll do." For the chassis is overhauled, too, and it combines with the engine to make a rapid, sure-footed and fine all-round sports coupé.

Go for the full-fat Mercedes-AMG C63 if you can afford it, because it’s an absolute riot. But if you’re not bothered about all that V8 blood and thunder, then at £15,500 less than the C63, the C43 Coupé is a comfortable, all-weather, cross-country beast. And any doubts that 367bhp isn’t enough turn out to be poppycock. It's plenty quick enough.