Production of the eighth-generation, C8 Chevrolet Corvette got off to quite a slow start at the end of 2019. Much of 2020 was also understandably problematic. Other than for mask makers and home-office suppliers, of course, last year can’t have been good for anyone.

Now, however, Chevrolet’s production lines at the Bowling Green plant in Kentucky are cranked up and running apace, building C8s at a rate of some 50,000 a year, most currently being gobbled up by the North American market. Wherever they’re headed, that’s a lot of sports cars: very likely more than all the 911s built by Porsche and all the F-Types built by Jaguar this year put together.

But sales volume hasn’t been enough, thus far at least, to make the Corvette a globally respected player within its strategically important market niche. That, you suspect, is what the car’s new mechanical layout and technical configuration – its mid-mounted engine, dual-clutch gearbox, adaptively damped, manually adjustable coilover suspension, and new availability in right-hand-drive form – is really all about. Not just making the Corvette handle like its pedigree European rivals, but making it a much closer notional rival for them as well, and therefore so much harder for the badge snobs to dismiss.

As of now, European deliveries of this car are under way. UK sales agent Ian Allan Motors of Virginia Water, Surrey, is expecting its first right-hand-drive customer car in November and currently has an order bank running well into 2023. Yes, you did read that correctly (they’re the only UK dealer). You might still be able to get a car quicker if you import one yourself or through a third party, but the official route gets you a right-hand-drive car, a proper dealer warranty, service backup and more besides. 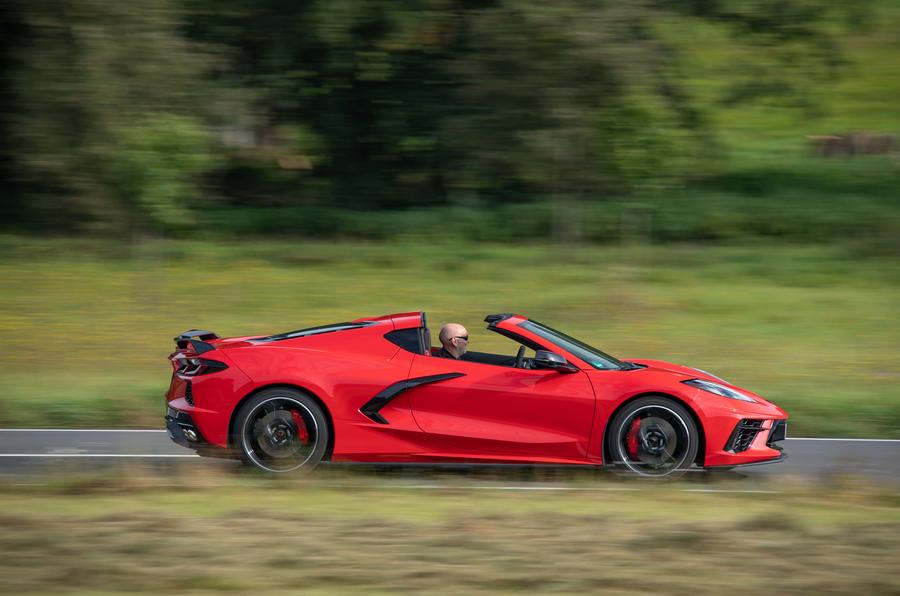 European-spec C8s get Chevrolet’s Z51 performance kit as standard, with its stiffened suspension, beefed-up brakes, additional cooling, shortened final drive ratio and aerodynamic enhancements. They’re slightly less powerful than American-spec Corvettes (475bhp versus 495bhp) as a result of having to meet Euro 6d emissions standards, but they also come in higher equipment specification and with grippier Michelin Pilot Sport 4S tyres than US cars. An electronically controlled limited-slip differential is standard; magnetorhelogical adaptive dampers remain optional (and were fitted to our test car).

UK prices for the regular series car (rather than the earlier-announced launch edition) start at £74,200. For a mid-engined, semi-exotic, 475bhp V8 two-seater, that seems to me like quite good value in today’s money. Then again, next week it’ll probably only buy you a bus ticket, a Twix and a music stream for your iPhone 47.

Looking at this car creates a strange mix of familiar and unfamiliar feelings, and sitting in it feels even more odd. Outwardly, to me at least, the C8 looks less like a Corvette than some unfortunate Ferrari F430 that’s being haunted by the ghost of an F-22 fighter jet. It’s fine, if a bit generic.

They’re loving it in stars-and-stripes America, of course, and since that’s where most will be sold, who’s to criticise? But does it really look like a Corvette? Personally, I don’t see it. With mid-engined instead of long-bonnet classic front-engined proportions, I don’t know how it ever could have.

Sitting almost a foot and a half further forwards in the car than you might have in your last Corvette, the enigmatic old view out over the long bonnet – and the sense that you’re perched right on the rear axle as if you were driving some supersized Caterham Seven – are both gone, too. The new Corvette could actually grant a better-placed, slightly lower driving position. If you’re particularly tall, you might struggle just a little for head room, and to easily see forward underneath the low-set front header rail.

But so much, you could say, only comes with the sports car territory. At least you do sit right at the centre of the car now, with the chassis seeming to rotate around your hips as you turn this way and that, in typical mid-engined mode. Meanwhile, this has become quite a hard cabin to criticise for its materially rich and technologically replete build and specification. The dashboard and fittings all look and feel like they should on a £75k car, and the on-board technology (digital instruments, head-up display, air-conditioned seats and premium stereo) is certainly all present and correct. 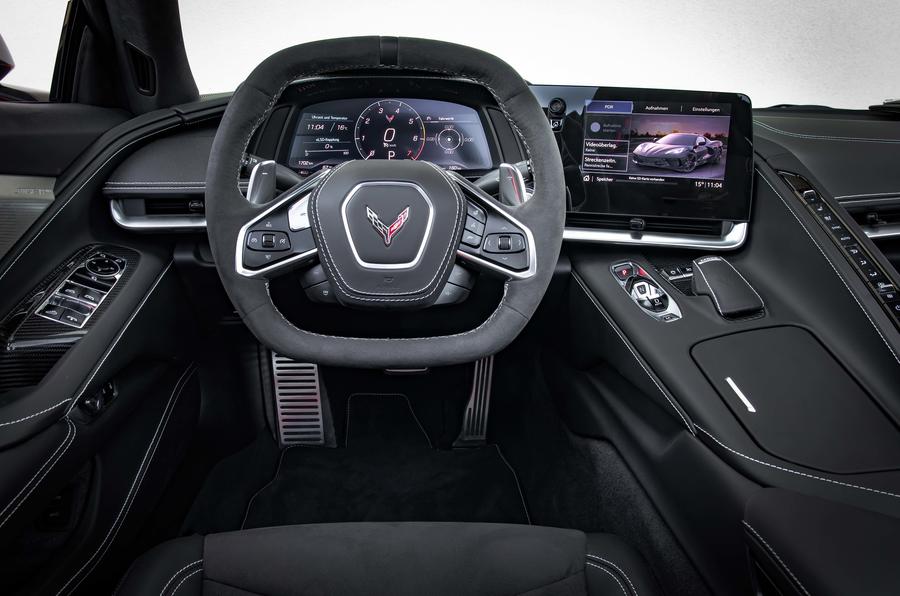 You’re sitting at much closer quarters with the car’s front wheels than ever a Corvette has allowed before, needless to say – and what a difference that makes. The one thing that Corvettes have never done well, until now, is steer; long steering columns and plenty of weight out front have seen to that. The new one, by the starkest of contrasts, steers in precise, instinctively responsive fashion and with really intuitive weight and pace. It isn’t darty and direct like a Ferrari F8, and it isn’t as dreamily feelsome as the hydraulic rack on a modern McLaren or Lotus. But consistent, moderate steering gearing and the linear build-up of cornering forces make this car easy to guide at pace, and satisfying to interact with throughout the speed range.

What doesn’t fit the modern mid-engined dynamic mould so well are the C8’s size and its apparent heft. The car isn’t lithe-feeling or easy to thread through a gap. It really fills its lane and rides in quite a gentle, laid-back frequency, rolling and moving around just a little as it corners, and breathing with long-wave bumps in a way that marks it out loud and clear as a versatile, daily-drivable, slightly easy-going sports car rather than any kind of cut-price supercar. There’s something a bit lazy about the car’s body control and initial change of direction – but it certainly feels dynamically expressive to drive.

Although the engineers will tell you how much stiffer the new car’s spring rates are than were the C7 Corvette’s, they’ll also tell you that they were aiming for a balanced, pragmatic dynamic compromise here, and a versatile rolling character. They’ve struck that particular balance very nicely, and it makes this car a pleasant and comfortable long-distance car, and supple-riding around town and on less-than-perfect country roads; but also one that’s fluently agile, composed, and both interactive and engaging through flowing bends.

So the C8 rides nicely and handles enticingly well; more moderately than the supercars it’s imitating, but still with balance, poise and natural verve. And yet guess what? It’s still that V8 engine that is the car’s main draw. After all those millions spent on engineering and developing a mid-engined chassis, some at Chevrolet might quietly despair at that news, but it’s actually just a sign of how multifaceted this car’s appeal now is, and how much charm and distinctiveness it retains.

There is no other sports car in the Corvette’s niche with an atmospheric V8 engine, after all. You can have a front-engined Ford Mustang GT or a Lexus RC-F if you’re quick, but neither’s really the same kettle of fish.

The engine is controlled through a long-travel throttle pedal that somehow seems very ‘classic Corvette’ when you’re squeezing it. The delivery feels just a little breathless at very high revs, but the crank still spins freely to the far side of 6000rpm, and with wonderful response, a superb progressive torque delivery, with plenty of potency and with a really delectable audible character. Sat just behind your head, the V8’s mechanical whirrs and warbles, its creamy-smooth induction noise and its bellowing exhaust note are all utterly authentic. Work it hard and this becomes a really vocal performer as well as a fast car, the cruising refinement it has at lower speeds evaporating like unburnt fuel vapour. You won’t miss it for a second. 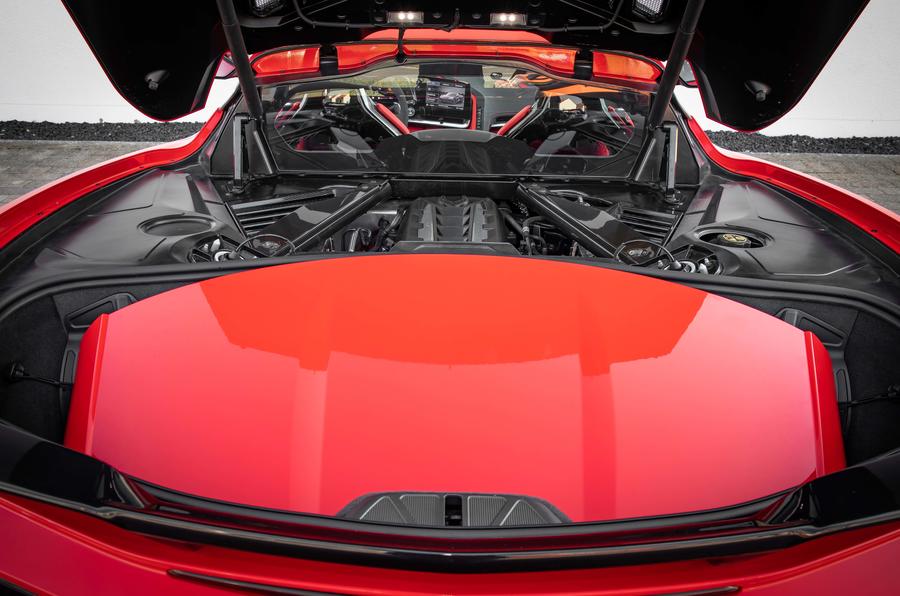 Well, on German roads and in left-hand-drive form, it made a fine impression, but bigger tests are to come. The signs are good; but when we’ve driven this car properly on UK roads and on track, we’ll be able to say with more confidence.

Whatever happens, if you don’t like the way this car sounds and how heartfelt and genuine its character is, I’m not sure you can really claim to be a true car fan. And if you can’t respect how much better a sports car the Corvette has now become – whether it’s quite the kind of sports car you happen to like, or the break from the sporting norm it used to be – I’d say you’re simply not giving it an even break. It’s that simple.

This car deserves its shot at the global big time, and it’s never been more ready. 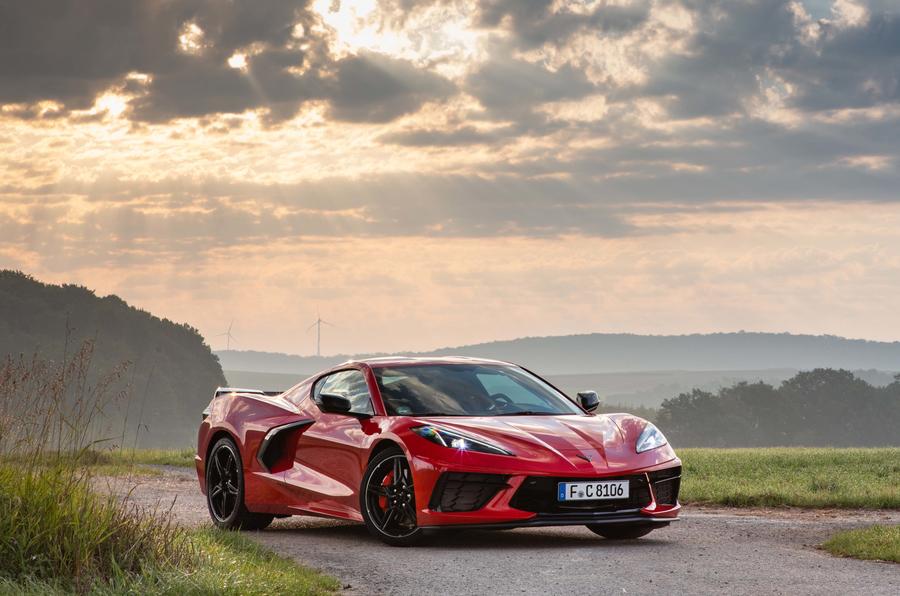 Log in or register to post comments
Caddylad 6 November 2021
I've had the privilege of living and working with Corvettes most of my life... The New C8 is a fantastic car, unfortunately unsupported by GM as per usual. As the only Chevrolet branded car in Europe now on sale, GM needs to put it's money where its mouth is! I have worked back in 2001 for a GM dealer selling all the Cadillac/Chevrolet products i.e. Cadillac Seville STS, Chevrolet Camaro, Blazer and Corvette C5 based in London. I also was a sales specialist for the Stratstone Cadillac and Corvette brand in Park Lane, London where we did shift cars but with little financial/ Media help from GM. If GM really wants Europe to take the C8 seriously, ensure there's proper dealers dedicated to the product and providing good customer sales back up.. The unfortunate demise or Bauer Millet Manchester and Lawrence was a huge hit for dedicated Corvette fans. One UK dealer is ridiculous. I can't wait to drive one.. This is still a car to take seriously, especially now with the introduction of the new Z06 which should hit UK in around 2023!! Come on GM.. pull your finger out!
BlahBlah43 16 October 2021
The C8 is quite unattractive outside. The rear end looks like an after thought. The car seems to be much more refined and luxurious than the C7. Really dissapointed there is no manual transmission option as well. I would go Cayman GT4 for the same money
artill 13 October 2021

As far as i can see the best bit about the new Corvette is RHD, and the price. Its different, not better than the C7. I prefer the looks of the mid front engined layout they used before, and being a dinosaur, i would miss the manual box that came on the last one as well.

I do doubt that the reviewer has ever sat in or driven a C7, the steering is great, and many reviews have sugested the one of the few flaws in the mid engined version is that the steering isnt as good as its predecessor. The C7s i have driven have a nice high quality interior too, not that i have tried the C8 so i cant say it isnt better, but there was nothing wrong before.

But, given we now get this RHD, and at a sensible price its hard to argue with. I just wish they had seen the business case for a manual as Porsche have