From £78,4858
Most important Lotus in decades heralds a new era and sees out an old one, being the firm's last petrol sports car
Open gallery
Close

This car feels important. The Lotus Emira is the final petrol-engined car that Lotus will make, but as well as an ending, it’s also the start of something, as the first new model released since Chinese conglomerate Geely took over the company five years ago.

The Emira’s direct predecessor is predominantly the Evora, a coupé brilliant to drive but a little unloved otherwise. But given Elise and Exige sports car production has also recently finished, the Emira could be expected to pick up some Exige interest. Originally a focused Elise with a roof, that had become a raw, V6-powered beast by its end, so you could consider the Emira’s remit as broad enough to be both grand tourer and sports car. Or in other words, to be a Porsche 718 Cayman.

The Emira arrives with a 3.5-litre V6 provided by Toyota and supercharged for its Lotus application, where it makes 400bhp at 6800rpm and 310lb ft at 3500rpm. You can get a six-speed manual gearbox (as tested here) or a six-speed automatic.

A Mercedes-AMG-sourced turbocharged 2.0-litre four-cylinder engine with 360bhp will follow at the end of the year. That will have an eight-speed dual-clutch automatic only. 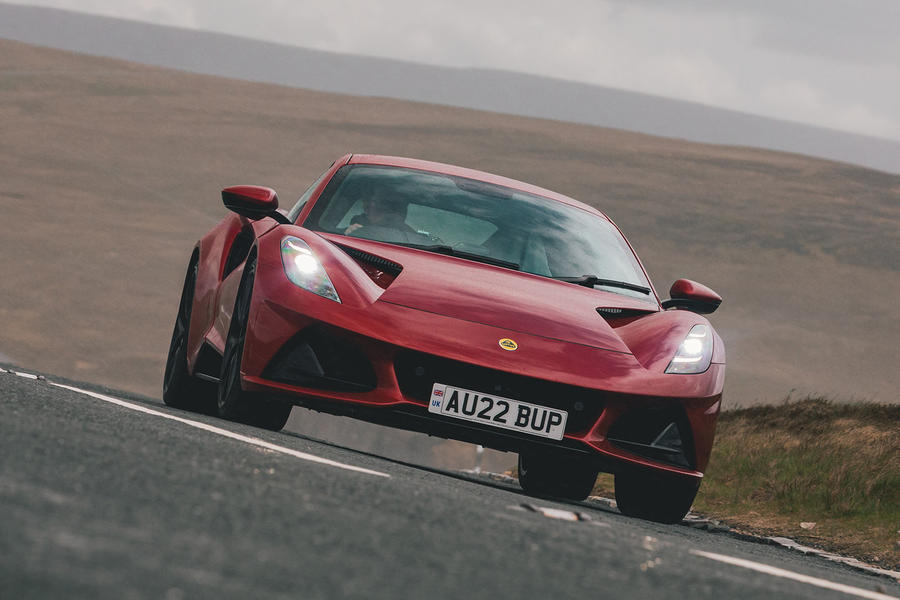 At the moment, every Emira is a First Edition, priced from £75,995. It's a two-seater and, as with Lotus's other recent sports cars, based on an extruded and bonded aluminium chassis, now fabricated at a new facility in Norwich and dimensionally different to all of its relatives. That means it might not be so compromised inside, given the offset driving position of the Evora in particular.

And so it proves. The Emira feels roomier, with more space between occupants and with a fairly low sill that’s easy to step across.

Lotus is keen for us to note that our test Emira is a prototype, albeit a late one, so we should overlook some interior quality niggles – ruched leather, some overly dim graphics.

But I don’t think it needs to worry. Even in this one-before-production Tool Tryout iteration, fit, finish and perceived quality are a cut above any recent Lotus, with a plushness and practicality to it from which the Evora would really have benefitted.

There are long door cushions, useful door pockets and glovebox, and cupholders on a tall centre console that also features a gearlever set higher and closer to the wheel than in the Evora – more like in the old Esprit, Lotus says.

The instruments are digital and the infotainment is via a touchscreen with smartphone mirroring. The heating and ventilation controls are separate; an occupant wearing a crash helmet in a graphic is a cute touch.

The driving position is good. I find the seats a little unsupportive, but my colleagues don’t mind them. The pedals feel less offset than the Evora’s and the steering wheel, too squared-off for my taste and with buttons too easily inadvertently knocked as you twirl it, is at least widely adjustable. The stalks are shared with Volvo and Polestar (other Geely subsidiaries), which is no bad thing.

There’s keyless-start, one of a raft of features novel to a Lotus, like adaptive cruise control with a speed limiter, road-sign recognition, rear cross-traffic alert and more. Things that being part of a big car company allow it. But the red flap over the start button suggests there’s still some raciness at heart.

So there is. The V6 fires to a cultured zing. You can see the supercharger-bypass actuator through the glass that sits between the occupants and the engine, and the motor is metal-topped, rather than shrouded in plastic. It looks good.

That said, the 50-metre test - how a car feels as soon as you pull away – could be more promising. It’s hard to gauge the revs precisely and easy to either bog down or slip some wasted revs. But the ride is composed and steering weighty (it’s still hydraulically assisted).

What doesn’t come is the immediate flow and flighty grace of the Alpine A110, which is perhaps unsurprising when the Emira weighs 1440kg to the French car's 1105kg. I hear the argument that a Lotus ought to be the lightest car in any class in which it competes, but I suspect that Hethel would rather have a full order book than an under-challenged weighbridge; and with the Emira sold out for two years, it seems to have it. 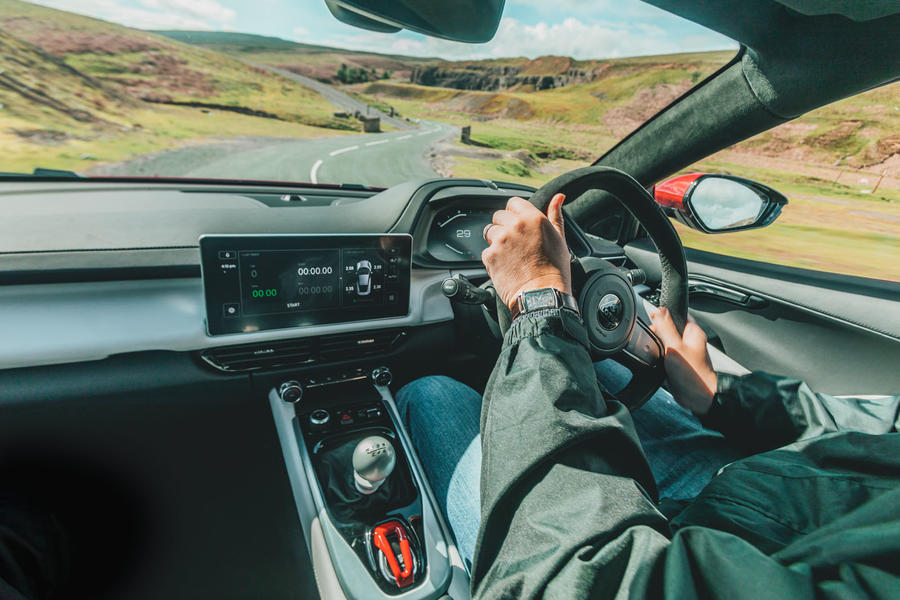 Regardless, at low speeds, poor roads are smothered well by the Emira. This version has a Touring suspension set-up, while a stiffer Sport alternative is an option (and better mated, Lotus says, to stickier Michelin Pilot Sport Cup 2 rubber than the Goodyear Eagles that this car wears, 245/35 R20 fronts and 295/30ZR 20 rears).

It’s absorbent like this at a cruise, too. There is noticeable road and wind noise, but it’s a car that you could happily cover big miles in. I doubt you would want it much stiffer for that.

There are driving modes, but they leave the steering and damping alone. The Driver’s Pack includes a fruitier exhaust and a track mode for the stability programme, plus a limited-slip differential, and this car has it.

And as a driver’s car, it’s mostly great. On challenging stretches of road is where it’s absolutely at its best, in fact. On a road where there are loads of inputs on one side of the car and fewer on the other, strewn with cambers and crests and gradients, it shows its true Lotus origins.

Across my favourite test route, it feels seriously good, refusing to lose traction over an off-camber crest where most cars scrabble a little and only giving the merest ripple of vibration through the steering when encountering big surface imperfections while both braking and cornering.

The steering is direct and accurate, with 2.8 turns between locks, and it does that Lotus thing of offering good road feel while filtering away nasties. The Emira feels like it was made for roads like that.

Issues? Some. The brake pedal has an amount of dead travel at the top of the pedal that drops it too low for easy heel-and-toe downshifts. That's unusual in a Lotus but might yet be an anomaly. Less unusual is that the six-speed gearbox’s shifter mechanism is till a bit slack compared with the best in this class. A Porsche shift is tighter.

Still, there’s nothing wrong with the engine delivery once a gear is engaged. It revs easily and has plentiful torque, and while it's nowhere near as shouty as the last Exiges, that suits it; and at least in Sport mode, it crackles discreetly.

Whether it has the measure of its rivals is a question for another time, but this is the best Lotus for a generation. 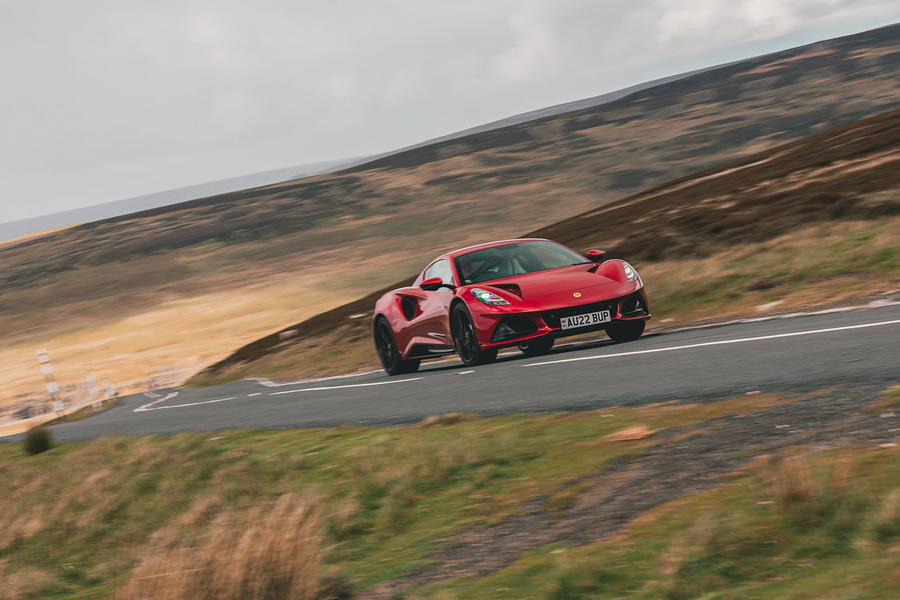 STUNNING little car. So delicate and sensual looking - the antithesis of the boorish Germans. Just lovely.

Buy the Cayman, you know its what you really want. That an older Porsche Cayman GTS, GT4 and GT4RS all spank this latest and greatest Lotus is all you need to know. Lotus was at best a two trick Pony, light weight equalling better handling. Neither figure in this last attempt, so drop the Colin Chapman nostalgia.

LoL! Comment couldn't be more boring if it tried.

Sorry to have to say this, but, this comment is I'll thought out.

Sorry to have to say this, but, this comment is I'll thought out.

substitute "bad" for I'll, or ill, either way the comment was uncalled for,and didn't even mention the actual subject, the car.

Sorry, but while German manufacturing is powered by Russian fuel it is the inevitable conclusion, however unpalatable. The relevance to the Lotus is I would rather buy that made in the UK with little funding to despots. Especially with the Japanese engine choice.

Agreed Peter, its your right Apprentice to disagree with my comments, we all respect that. The analogy to Porsche, Putin and Ukraine is however poor judgement. Be a man and acknowledge your error of judgement. And when you buy the Lotus, let us know how you feel about your choice?

I think it looks great and if I won the lottery, I'd be paying over the odds for one of these to jump the waiting list rather than buy something from the supercar league.