9
Bowler’s Defender-inspired rally car gets a 567bhp V8 transplanted from the Range Rover SVR. Is this a matter of excess, or an engineering exercise judged to perfection?
Open gallery
Close

You look out of the kitchen window and there’s a pterodactyl sitting on the birdbath.

It’s the same effect when the Bowler Bulldog you’ve come to test is parked outside a BP station just off the A14 – straddling two bays, because it has to. Licence plates mean it’s road-legal; everything your eyes tell you seems to contradict that. We’ll come onto the wider implications of this latest V8-engined rally-raid ‘prototype’ in a moment, but that it can concurrently exist as a successful silhouette racer and, quite feasibly, as the basis of a more luxurious road car demonstrates two things.

First is that Derbyshire-based Bowler’s engineering capabilities far outweigh its status as a relative manufacturing minnow – it numbers fewer than 40 employees and builds only 20 or so cars a year. The Bulldog might share its wheelbase with a Defender 110, along with a handful of panels, the upright windscreen and a bit of dashboard trim, but as a percentage, the parts carried over are in the low single figures. Bespoke glassfibre encases a structural roll-cage built to withstand end-over-end crashes in the Moroccan dunes, but the real magic lies deeper, because underneath it all lurks not a ladder-frame chassis but Bowler’s new laser-cut-aluminium cross-sector platform.

During the design phase this chassis underwent six months of finite element analysis, which is why it takes the form of an attractive, intricate latticework with struts that protrude into the cabin and straddle the transmission tunnel. The upshot is that the Bulldog touts a torsional stiffness four times that of a standard Defender – and two-thirds of the way to matching a Bugatti EB110, amazingly – but weighs 200kg less.

Second is that there is a market for useable modified Defenders (or, in the case of the Bulldog, Defender lookalikes) with heroic performance. Bolted onto the Bulldog’s bespoke platform are Range Rover subframes, so while Bowler offers the car with either petrol or diesel V6 (the latter being the popular choice for competition, due to its 1000-mile range with the 225-litre fuel tank), it was always ready to take JLR’s supercharged 5.0-litre V8. And that, unsurprisingly, is the engine eccentric hobbyists of considerable means want. It arrives at Bowler in the same 567bhp tune of the Range Rover Sport SVR – a car half-a-tonne heavier than the Bulldog but still capable of hitting 62mph in 4.3 seconds. As a bellwether for the Bulldog’s performance, we’re now into the uncertain region between excitement and panic.

Elsewhere you’ll find limited-slip differentials for the front and rear axles, the latter being switchable through four modes, and Brembo brakes from the Range Rover Sport. There are further vestiges of Range Rover inside the cabin – the column stalks, gearlever and electronic handbrake are all conspicuously posh – but it’s otherwise no-nonsense, with a Motec display and foam fire extinguisher. The driving position is abrupt but comfortable in an agricultural sort of way, with the pedals set up for left-foot braking. The Cobra buckets seats also sit more central than in a Defender, so wheel-twirling drivers don’t thump their funny bone on the door. Given the Bulldog will cross boulder fields at more than 100mph, that’s an A-star for ergonomics. 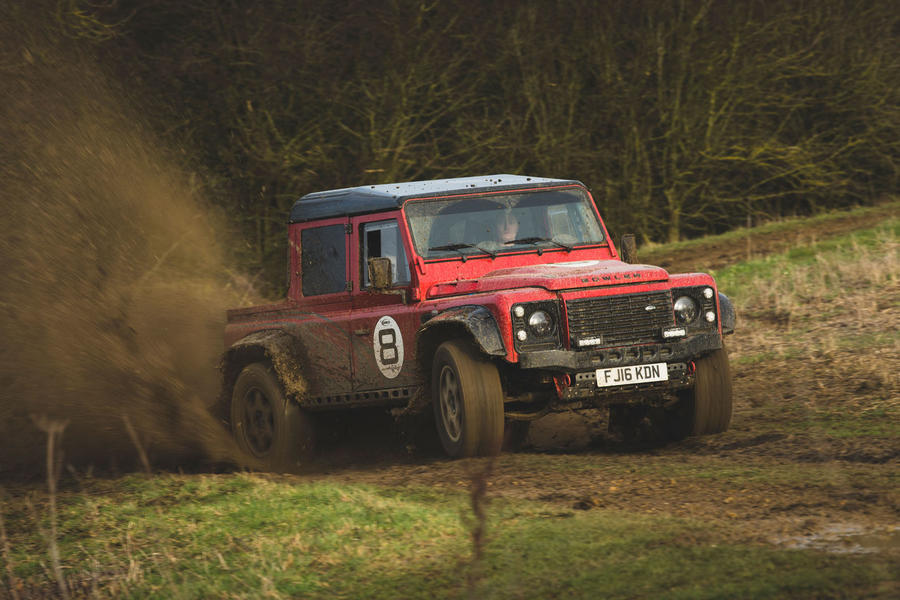 On the road it takes a good few corners to trust what the Bulldog can do. Given how quickly it’ll go down a dirt track, the car’s Tarmac set-up is refined to an almost implausible degree.

On this left-hand-drive, race-ready model the tip of an unsilenced side-exit exhaust gets too intimate with your outboard ear and the polycarbonate windows creak and crackle incessantly, but these are just the more raucous trimmings. Like the engine and gearbox, the rack-and-pinion steering is lifted from a Range Rover Sport and the precision it imparts is arguably the most surprising thing about the whole driving experience. We’re talking fingertip inputs here, with a steely core as you load up the suspension. It’s quick and deliberately light, because in the attritional world of endurance racing, gratuitous weight at the helm is a strength-sapping disadvantage.

Confident not only in the brakes but your ability to accurately place such a wide car, thoughts turn to the engine. Which is monstrous, in short, with the same bassy, metallic zing enjoyed by F-Type SVR owners and a good response, despite the Bulldog’s longer throttle. This unit peaks at 6000rpm, at which point the full swashbuckling theatre of the thing wants to explode from it glassfibre body. You get charisma to match the absurd concept of a road-going rally-raid car, but without the chuntering, rough idle and aggressive fuelling that make racecar engines such a challenge. Equally, the Bulldog’s engine fires readily, settles into a smooth idle and eases 1800kg off the mark effortlessly. It is not a difficult car to gently flow through Northants’ villages, though it’s hard to escape the feeling one clipped sandstone buttress might bring the whole settlement down.

How fast? You’d lose sight of an Audi RS4 through corners but would certainly catch the thing when the road opened out. The calibration is undertaken by Land Rover, and so while this ZF gearbox doesn’t snap leanly between ratios in the blink of an eye, it is smooth, and in fact a small interruption in the delivery of torque only serves to exaggerate the drama. There’s a pause for breath, then onwards, as you zip through the short ratios.

That the Bulldog does this without comically rearing its nose under power is the giveaway that body control through corners will be excellent, and so it proves. There is roll but not much, and the rates feel just so natural. This is a million miles from the traditional Defender experience and, in terms of the car’s all-round dynamism, not far from what you’d get from the Range Rover Sport with which it shares various mechanicals. Our example isn’t even wearing anti-roll bars, either, which has you wondering whether even trackdays wouldn’t phase a Bulldog.

Meanwhile, untethering the Bowler off road is riotously good fun. Admittedly, this is not news, but I didn’t expect it to present as an Alpine A110 for unforgiving environments. Once you realise the most effective way to change course and head off any understeer is to use the throttle as assertively and early on in the corner as possible, the level of control and adjustability is phenomenal. Rear suspension travel is almost 300mm, with the front only a little less, and the ability of Bilstein’s twin-spring, remote-reservoir dampers to methodically absorb massive inputs and stay the car’s course breeds confidence.

Being nose heavy and with four-wheel drive, the Bulldog tends to quickly pull itself straight after the rear tyres cut loose, but with enough momentum it’ll hold vast, permissive slides that are a joy to supervise. Indeed, the faster you go, the smoother it gets, and the resilience of this chassis is profound. One jump – some may have mistaken it for the BA456 to Tangier – resulted in no more than a crushed skid-plate. 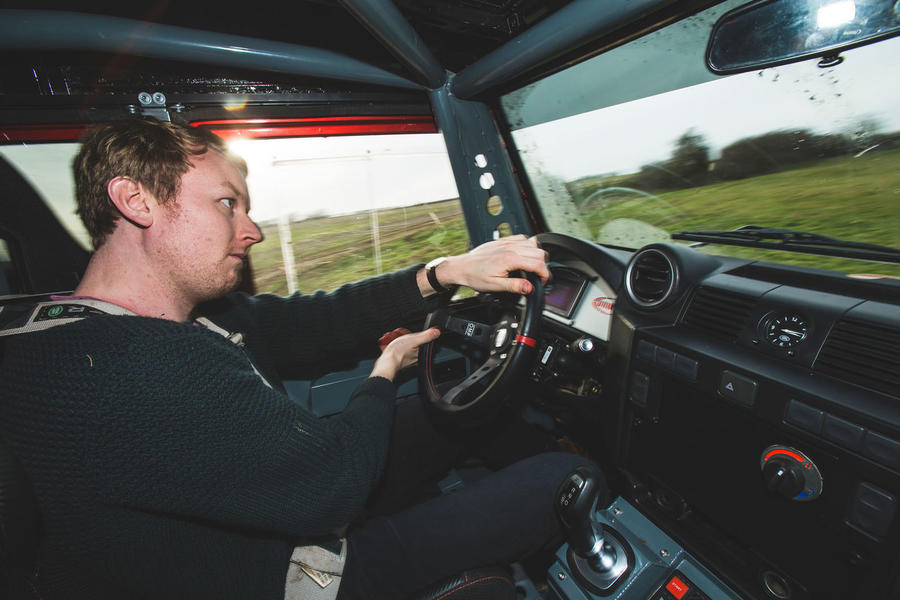 It’s possible to order a Bulldog with DAB radio, electric windows and ordinary three-point seatbelts. So complete are the car’s road manners that I daresay those additions – plus an exhaust silencer, though only a small one, please – would be enough to adequately tame it for everyday use.

But if Bowler wants to stray further still from the Dakar disposition and give us this V8 version – not quite signed off yet, but clearly ready – with a more sumptuous cabin, it shouldn’t hesitate. Even in the blank-cheque world of automotive extravagance, the big-displacement Bulldog has character to spare, incontestable credibility and quite astonishing versatility. 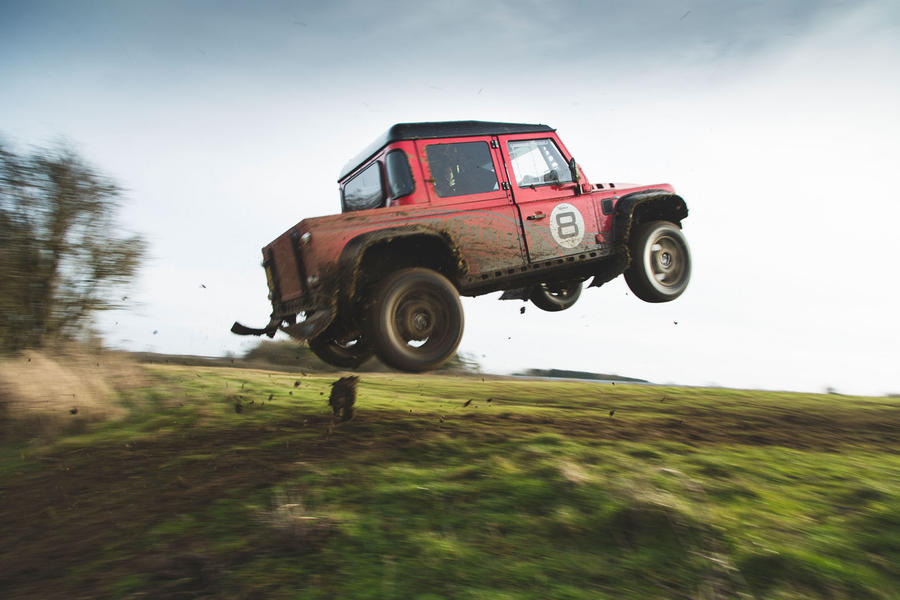 The best way to burn excess cash if you suffer from that problem....

This is mechanical and cool,

This is mechanical and cool, and so much more interesting and appealing than the other article today about the 7th generation S Class.

I am so sick and bored of reading about shared architecture, more 'tech' crap nobody wants, and great big sticky fingers touch screens.  It is killing that spirit of cars and I hate it all.  And I hate those moronic moving indicators that started with one-car-fits-all VAG and are now spreading everywhere like a new bubonic attention-seeking plague.

Love the 24th photo, the first after the two of the jumps, with the front number plate bent back and the shot of Richard Lane's manic smile seen through the windscreen with the wipers going!