From £62,035
Audi developed the E-tron for drivers who want an electric luxury car that doesn’t look or feel like it runs on battery power. Early signs bode well
Open gallery
Close

The creators of the Volkswagen Iltis unexpectedly set a ball rolling that Audi caught when it launched the original Quattro in 1980.

Fast forward to 2018 and the boxy, rally-wise coupé has become the peg on which the rest of the firm’s line-up hangs. Its influence is visible in the styling of Audi’s recent models, from the Audi A1 to the Audi Q8, and engineers stress the electric E-tron ushers in the next evolution of the now-famous quattro system.

It takes a substantial stretch of the imagination to mistake the E-tron for anything other than an Audi, even when looking at a multi-coloured pre-production prototype like the one I drove in Namibia. It’s not a Xerox copy of another SUV in the company’s portfolio – styling cues such as a lighter-coloured grille help it forge its own identity – but it falls perfectly in line with Audi’s current design language. Sharp headlights? Check. An octagonal grille with a chromed frame? Check. Elongated rear lights connected by a light bar? Check and check.

The E-tron landed at the opposite end of the design spectrum to its Jaguar I-Pace rival, which intentionally looks like nothing else on the company’s résumé. The interior sings a familiar tune, too, because it shares its digital instrument cluster (Virtual Cockpit in marketing speak) and its twin-screen infotainment system with other Audi models such as the Q8. The result is an uncluttered, high-tech-looking cockpit almost devoid of physical buttons.

Several factors convinced Audi to launch its ferocious electric car offensive with an SUV instead of a saloon. It’s easily the most marketable bodystyle in key regions like the US and China. The larger dimensions of the body and the additional ground clearance also allowed designers to stuff the bulky battery under the passenger compartment while maintaining a generous amount of interior space.

As a result, four adults can travel comfortably in the E-tron without pining for additional head or leg room and the 660-litre boot is big enough for a serious trip to the local Ikea. But, since there’s no V6 under the bonnet, it stands to reason that there’s a second boot in front of the passengers, right? Not quite. Audi simply carved out a small space to store items like the charging cable. It’s big enough to take a laptop or a small bag but don’t expect to drive around with a fully loaded Christmas hamper stuffed between the wings.

The body hides an electrified evolution of the MLB Evo platform. It’s the same architecture used for the Audi Q5, Audi Q7, Bentley Bentayga, Porsche Cayenne and several other cars. Using a convergence platform kept development costs in check and let engineers pluck components from other models when appropriate. The steering system comes from the Q5 while the Q7 provided its axle mountings, among other small bits and pieces. However, the drivetrain is brand new and E-tron specific.

The E-tron’s core is a 700kg, 95kWh lithium ion battery. It powers two asynchronous electric motors – one over each axle for all-wheel drive – that zap the wheels with up to 402bhp and 487lb ft of instant torque when the temporary overboost function wakes up. In normal driving conditions, the motors deliver 350bhp and 414lb ft of torque. That’s enough for 0-60mph in 6.4sec. The overboost mode shaves 0.9sec from that time: 5.5sec isn’t bad for a car this size. How heavy? I can’t tell you yet. Audi resorted to automotive omertà when I asked how much the E-tron weighs.

The E-tron’s party trick is a pair of small cameras that are roughly the size of a GoPro lens. They’re mounted at the end of thin, L-shaped pods that stick out like antennae from the space normally occupied by the door mirrors. Offered at an extra cost, the cameras transfer footage to screens integrated into the door panels. Seeing what’s behind the car requires looking where you’d expect to find a door handle or a speaker.

It’s a set-up that takes some getting used to. The screens are much lower than conventional mirrors and, due to an odd twist of reasoning, there is no way to adjust their brightness. That’s unfortunate because glare becomes a problem when driving in direct sunlight. For buyers who take the plunge, the cameras boost range slightly by reducing drag. They’re also a great conversation starter and it’s fun to watch passengers stare at them with near-superstitious awe. 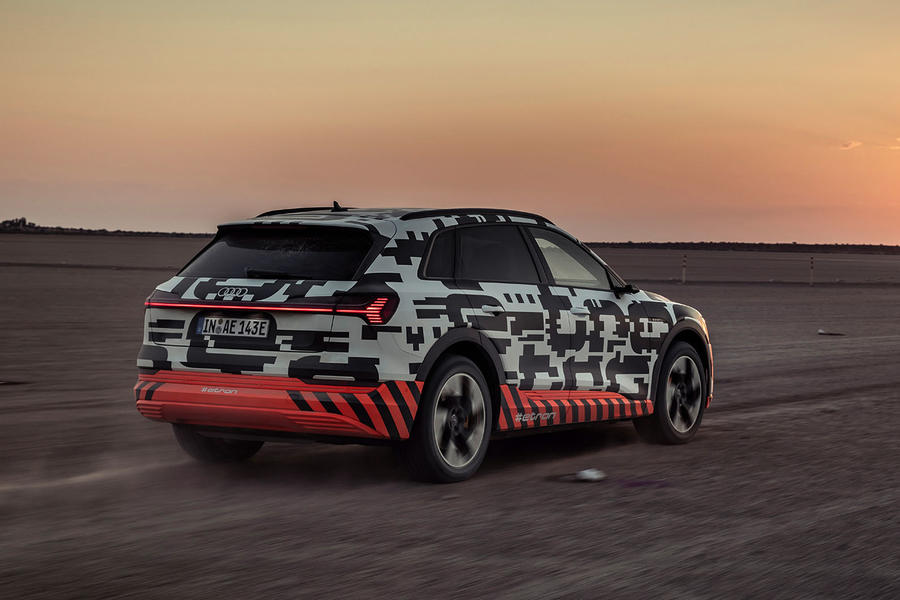 In the quest to further lower drag, engineers developed aerodynamically optimised screws to secure the battery to the body and cut air vents into the front bumper. The result is a Cd of 0.28, which puts the E-tron between the Jaguar I-Pace (0.29) and Tesla’s Model X (0.25).

“We didn’t want to build a car that drives like a computer,” says Michael Wein, the engineer in charge of the brake control system. “There is a lot of computerised technology in the E-tron but, at the end of the day, it should drive like a car. The driver should be the captain.” This train of thought also explains why Audi chose not to follow Jaguar down the dubious path that leads to piping artificial, sometimes spaceship-like acceleration noises into the cabin through the speakers.

Since it’s a member of the well-regarded quattro clan, driving like a car means achieving – and, at times, exceeding – a certain degree of performance. Wein smiles like the citizen of a newly founded republic as he explains the E-tron effortlessly performs two full laps of the Nürburgring, flat out, without overheating or running out of electricity, although he stops short of revealing its lap time.

Embedded in the Namibian desert, the closest I got to the’‘Ring was a makeshift race track traced on a salt pan that moonlights as a landing strip for small aeroplanes. I took my first lap in Auto mode, which lets the car read the ground and distribute torque between the axles as it sees fit. The numerous electronic driving aids worked in sync to keep me pointed in the right direction even after I entered a turn slightly faster than advised. So far, so good.

As I memorised the track’s layout, I threw caution to the warm, sub-equatorial wind and picked up the pace. I turned the ESC system completely off – an unexpected feature in an electric family car – and took advantage of ground as slippery as snow to present my most convincing impression of Walter Röhrl in his Sport Quattro, minus the flames, the noise and the rabid supporters. In these conditions, the E-tron becomes a car you dance with, not one you wrestle against, which is impressive considering its size and presumably not insignificant weight. The low centre of gravity helps erase body roll while the electric quattro system multitasks to direct torque to the wheel with the most traction and power the car through a bend. The motors deliver quick, linear acceleration out of turns. The E-tron is a lot more fun on dirt than a family-oriented luxury SUV ought to be.

I applied the brakes ahead of sharp turns but merely lifted off the accelerator to let the energy recuperation system scrub off speed as I approached the softer bends in the track. Audi’s clever electronic simulator loads the brake pedal with a natural feel that veils the presence of an advanced brake-by-wire system. It also eliminates the pulsations normally felt as a side effect of the ABS system.

Audi admits the E-tron isn’t a hardcore, purpose-built off-roader. It won’t keep up with a Jeep Wrangler on the Rubicon Trail. It’s about as comfortable going off the beaten path as a Q3 or a Q5. But, when push comes to shove, there is a built-in Offroad mode that unlocks the drivetrain’s full output and raises the air suspension by two inches to avoid a battery-versus-rock karate match. In this configuration, I drove the E-tron up a dune, hub-deep in the orange sand, without getting bogged down. I also tackled a variety of obstacles, including foot-deep ruts. Most owners will leave this facet of the E-tron unexplored, but adventurous motorists can rest assured that it’s there.

How does the E-tron handle a plain trip to a department store? It’s difficult to say. The test route included nothing that matched the common definition of pavement. It took our convoy down dirt roads that weaved in and out of land ruled by giraffes and springboks. Although scenic, this environment made it difficult to evaluate how the E-tron behaves at speed or how long it can make a full charge last in real-world conditions. It nonetheless revealed the electric drivetrain’s zippy response, both off the line and while accelerating from about 30mph. The steering seemingly falls on the lighter side of the scale even with the drive mode selector turned to Dynamic. 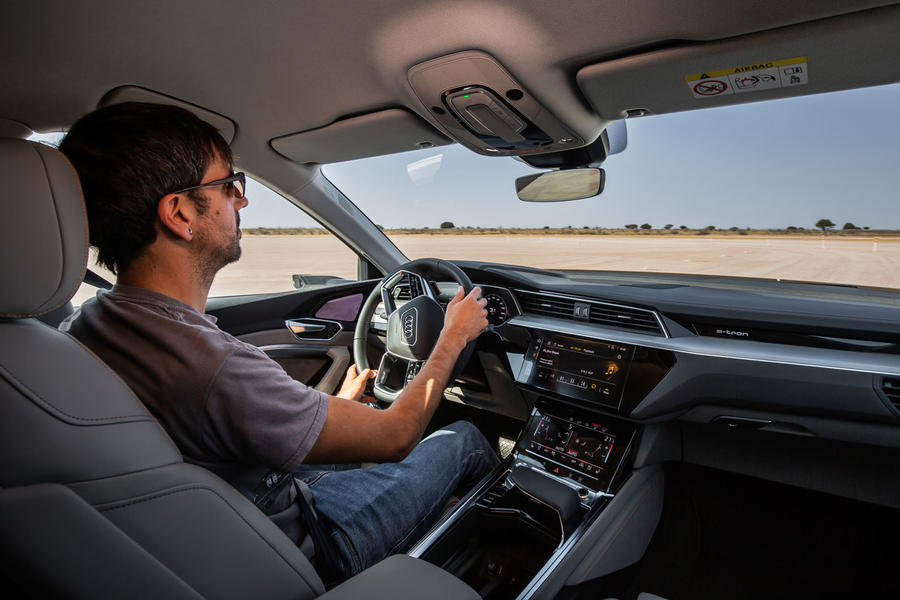 What I experienced bodes well for the inevitable comparison test against the Jaguar I-Pace, but I’ll wait until I drive a regular-production E-tron on paved roads to make a final call on handling, comfort and the overall execution.

What stands out above all, however, is that Audi cut no corners as it raced to enter the burgeoning electric luxury car segment. 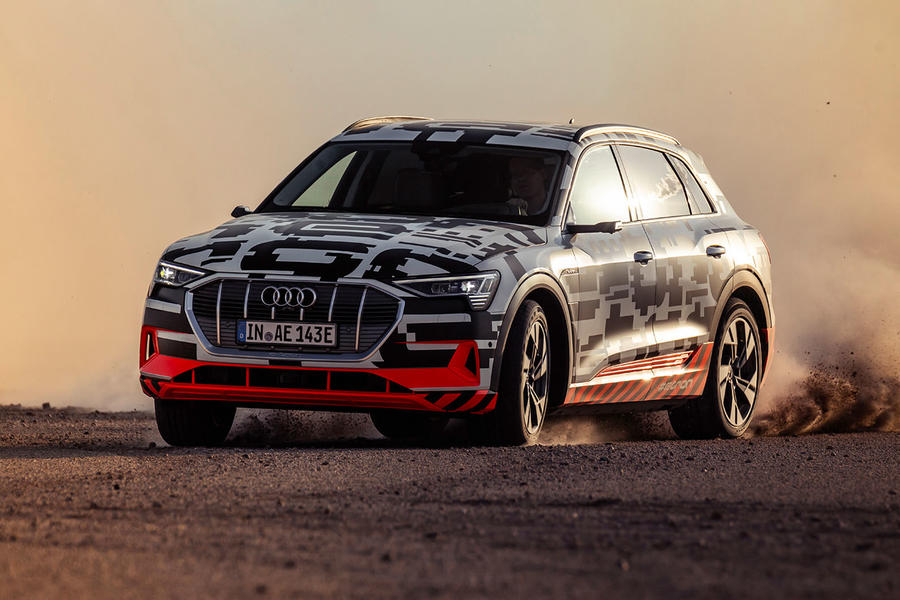 So true, with Tesla the only stories you get are titled "production hell" "delivery hell". Tesla need to spend LESS on development and MORE on jetting journalists half way round the world, putting them up in posh hotels and plying them with drink.

Once again, what can I say.

Just like the I-Pace shitter, this thing costs upwards of £70,000 yet STILL doesn't have the range or power to best a Tesla from two years ago.

Not to mention, all these "traditional" manufacturers are all having production delays as well, but where are the articles for those Autocar??

Just how more times can Autocar work with Audi to get E-tron stories out. Prototype of prototypes, prototypes of pre-production etc.   Another story on the 2nd of Sept was how Audi are now into full production, now they're doing a story on a prototype AGAIN.

All because Jag and Tesla have stolen a march on them.  Want a story, the Model 3 now sells over 20,000 a month yet still no article on the performance and long range versions. 'Only in north America' I hear you say well they did an article on a fast Dodge this week and that'll only sell a few thousand in it's lifetime in North America.