After 24 years, three model generations and roughly 600,000 UK sales, the Audi A3 Sportback, as it has come to be known, has become a pretty recognisable sight here in Britain.

Now the car that arguably kick-started the posh family hatchback class has entered its fourth generation, bringing with it a mildly revised exterior, a heavily updated interior and a raft of new safety and connectivity features to help give it an edge over its arch-rivals from BMW and Mercedes-Benz.

Audi has elected to initially launch the new A3 with a choice of two engines: a 148bhp 1.5-litre turbo petrol four-pot badged 35 TFSI and the 148bhp 2.0-litre diesel named 35 TDI that's tested here. Both are front-driven, but where the petrol makes use of a six-speed manual gearbox to direct its power to the road, the diesel is mated exclusively to a seven-speed dual-clutch automatic.

The engine line-up will become more comprehensive in the coming months, when a few more petrol and diesel options are thrown in the mix, while a new mild-hybrid petrol and S3 and RS3 performance models are all set to make an appearance by the end of the year. As is the current vogue, there will be a couple of plug-in hybrids launched, too.

Like all of its relations in the wider Volkswagen Group family, the A3 is based upon an evolved version of the MQB platform. It’s fractionally bigger than before, with this increase in size largely being a result of the need to house all the extra active safety systems that Audi has crammed beneath is angular, more assertive exterior.

These include automatic emergency braking, lane-departure warning and collision avoidance steering assistance, which are all standard even on entry-level Technik trim.

Up front, the new A3 employs a MacPherson strut-type suspension configuration, while the rear is dependent on engine choice. Similar to its Volkswagen Group relatives, the A3 benefits from a more sophisticated multi-link arrangement when producing 148bhp or more, while variants with less make do with a basic torsion beam. Our car had the former. 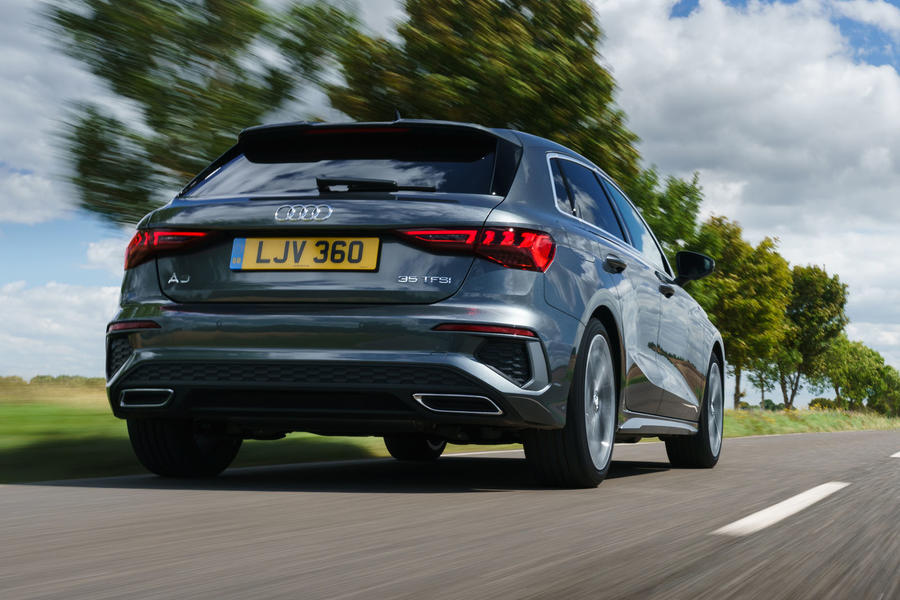 From the outside, it’s apparent but perhaps not obvious that this is a completely new generation of A3. It’s a relatively conservative update but, given the popularity of its predecessor, you can appreciate why Audi might have elected to take such an approach to the styling. For what it’s worth, I think it looks pretty smart.

What I’m not entirely convinced by are the changes that have been made to the A3’s interior design. The second-generation model was a bit of an icon in this respect and really raised the bar, not just in terms of design appeal but also for the levels of build and material quality that you could expect from a car of its size. It may have arrived way back in 2003, but its general design themes were still being used, albeit with a few tweaks, right up until the third-generation car left production.

The new A3 represents a pretty radical departure from that highly regarded aesthetic. There’s much more emphasis on digital screens and the like (even entry-level models gain Audi’s Virtual Cockpit and latest 10.1in touchscreen infotainment system as standard), but some of the material richness of the old A3 has been lost, too.

Glossy black and metallic-effect plastic is used much more liberally, and I’m not sure the A3 so confidently asserts itself as the flagship Volkswagen Group family hatchback quite as convincingly as it once did.

Still, practicality is good. There’s decent head room for back-seat passengers and leg room is pretty generous, too. Meanwhile, the 380-litre boot is directly comparable to that of the new Volkswagen Golf and fractionally bigger than that of the Ford Focus.

The A3 drives in an idiosyncratically Audi fashion. There’s very little feedback from the steering, but it goes where you point it and builds up a reassuring amount of weight as you add on lock. Grip levels are well-matched to the car’s performance and lateral roll is pretty smartly contained.

It does a good job of smoothing over compressions and doesn’t muck about when it comes to getting vertical body movement back under control. But while there’s decent pliancy here, it doesn’t always cope so confidently with secondary inputs. It’s far from terrible, but rougher stretches of road tease out a bit of choppiness, particularly at the rear axle.

That said, the cabin is well-insulated against suspension noise, so although it can feel a wee bit tetchy on particularly pockmarked roads, suspension thumps and bumps don’t sound overly uncouth or hollow as they reverberate inside.

The diesel engine performs pretty strongly, too, with the meat of its 266lb ft arriving once the tachometer strays past 2000rpm. It’s not desperately quick, but there’s more than enough shove for safe overtakes.

The automatic gearbox is largely well-mannered and doesn’t seem to suffer from quite the same slackness that has afflicted so many of Audi’s post-WLTP dual-clutchers. Engine refinement is good, but it’s not quite smooth-sounding or hushed enough under load to make you forget you’re burning diesel rather than petrol. 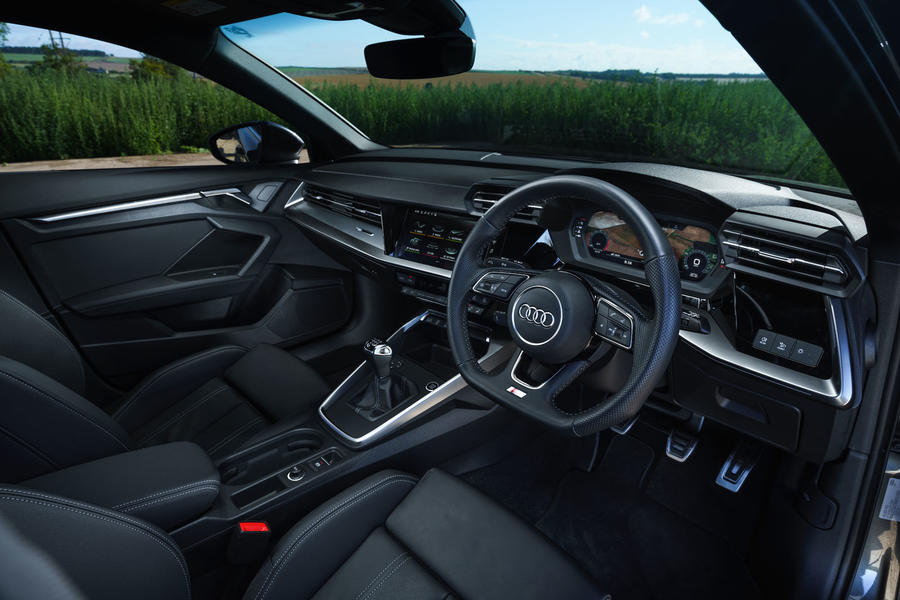 With the battering that diesel has taken over the past few years and a general move towards electrification, the concept of an oil-burning family hatchback seems a bit of a strange one these days. Unless I were planning on making regular long journeys, I would, as a private buyer, be inclined to opt for the petrol.

Fleet buyers might still be keen on a diesel, but it’s worth pointing out that this 2.0-litre engine isn’t RDE2-compliant, so it gets slapped with a 4% benefit-in-kind surcharge when diesel versions of the BMW 1 Series and Mercedes A-Class don't.

Otherwise, there’s enough to like about the A3 to make it recommendable. It looks smart, has a practical interior, offers decent performance and manages stable, secure driving dynamics. There’s a more appealing tech offering now, too, which will no doubt curry favour with many. Sure, it’s a bit of a bland device to drive, but when has that not applied to a non-RS Audi? 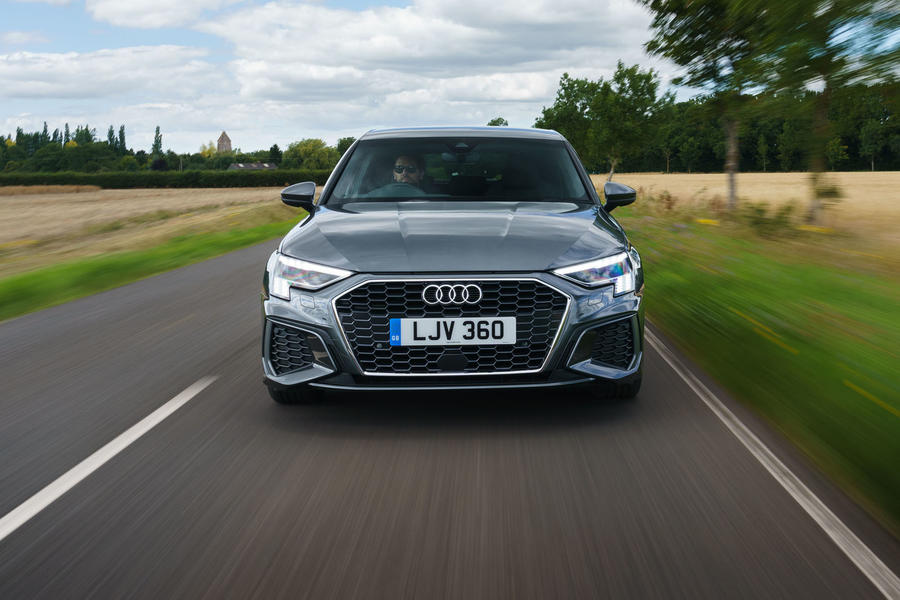 Audi once had a brand image of BCBG - a reputation for reserved refinement.  An understated Less is More elegance of form, and a resrained luxury interior.  Engineering was never a strong suit but entirly competent.

Increasingly however they taken gone the same crass route of designer Chris Bangle, that so damaged BMW's image.

The latest A3 iteration has agressive and disfuntional styling - redundant creases and huge fake intakes, while the interior is unrestrained and materials cheapened.  It also seeks to conserve cash by useing a rudimentary rear suspension on some variants of what purports, and is priced, as an upmarket vehicle.

My disapointment seems to be widely shared.

Good to see they’ve gone for a properly integrated screen this time rather than the ghastly cheap add-on look they had before. The only reason for such add-ons is cost. You can save money on cooling if it’s just stuck on as an afterthought.

Good to see they’ve gone for a properly integrated screen this time rather than the ghastly cheap add-on look they had before. The only reason for such add-ons is cost. You can save money on cooling if it’s just stuck on as an afterthought.

It was a pop-up screen, hardly an add on and would have cost more not less to implement

I realise that there may be other petrol engine choices coming but i can't say that I'm enamoured by the 1.5 petrol engine. I drove a courtesy car with that engine and it was very like the 1.4 CoD I had in my Q3. Not too bad at low speeds but lacked any real top end. Contrast that with the 190bhp 2 litre I have in my A5 - what a difference, great lazy power which is ultra quiet. Even the 150bhp 2 litre engine in both the A4 and A5 would be far superior.