From £87,495
Share review
The new Vantage has been developed as a Porsche 911 beater, and our first taste on UK roads suggests it can live up to that bold claim
Share
Open gallery
Close

Here we have another chance to experience a prototype version of the Aston Martin Vantage ahead of its launch, but this time on British roads rather than the frozen Lapland lake of our previous encounter.

While this isn’t a finished production car, the chance to see how it copes with rural Warwickshire was more than a sufficient excuse to take another turn.

The basics have been well detailed in our previous stories on the car. The Vantage is the second Aston to use AMG's 4.0-litre twin-turbocharged V8, but tuning means it has a fraction more torque than the same motor in the junior DB11.

The other significant addition is the arrival of a very clever electronically controlled locking differential, a first for Aston Martin and something that the Vantage’s engineering team reckon is critical to the character of the car.

Our drive in a prototype started at Aston’s new engineering base in Wellesbourne and took in many of the local roads – including the Fosse Way – that have been used most heavily during its development. 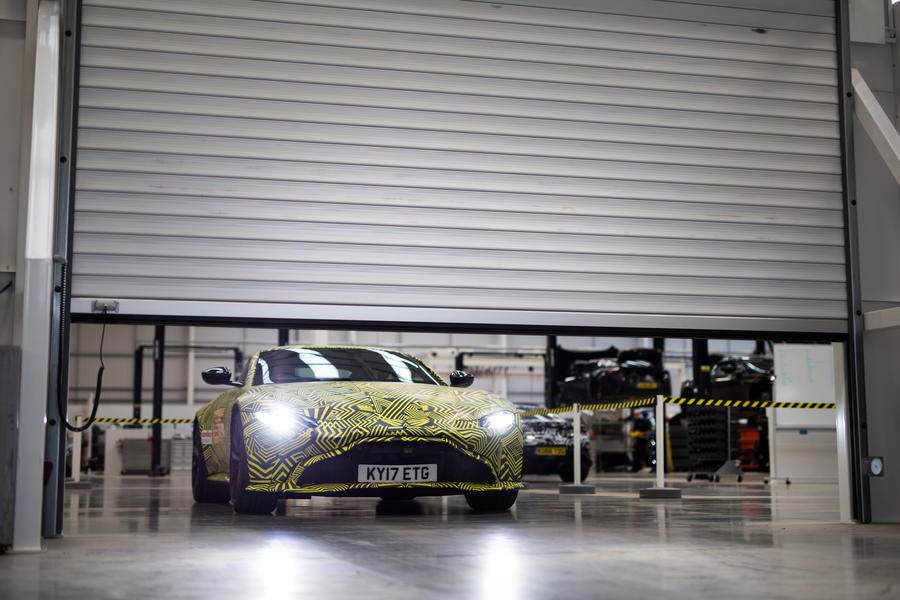 The hard-worked prototype wears a ragged zebra pattern disguise and the scars of a life that’s been lived hard. The dashboard reports various functions are unavailable and the interior has the unwashed aroma that suggests many engineers have spent many hours sweating in it.

It feels tighter inside than the DB11, and not just because of the lack of rear seats, with switchgear and gear selector buttons clustered lower on the centre console. The position of the seat closer to the windscreen also means that the fat A-pillars eat more front-quarter visibility.

Starting the engine proves that despite a high percentage of shared componentry, there’s no chance of confusing the Vantage with the DB11 V8.

It's louder and angrier from idle, with the prototype’s optional sports exhaust adding a savage rasp to revs and responding to every throttle lift with pops and crackles. It sounds more aggressive than anything else using this engine except, perhaps, the full-on Mercedes-AMG GT R. 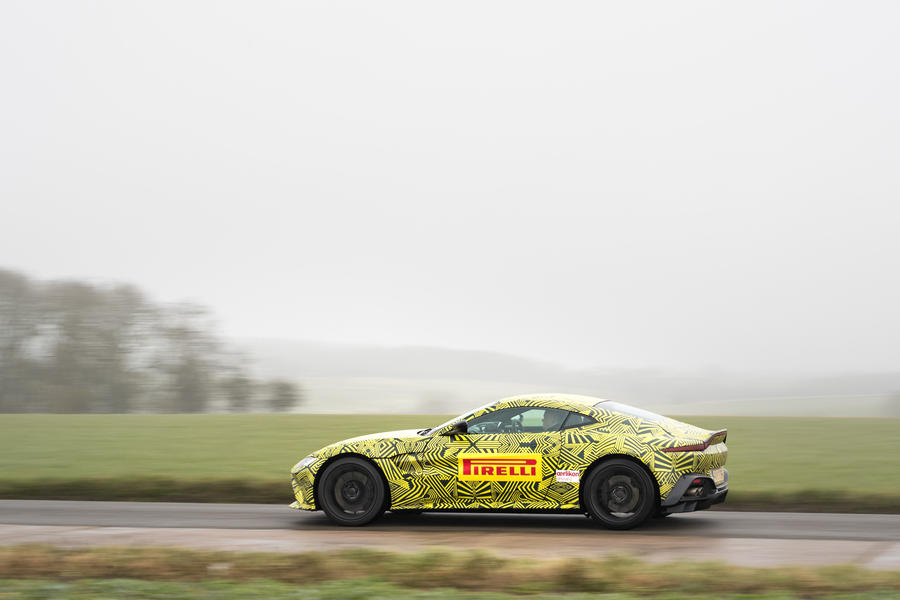 The Vantage is definitely Aston fast. The engine produces plenty of low-down grunt, but it really impresses when extended. There’s lots of drama on the way to the 7000rpm redline, with the Vantage pulling increasingly strongly over the last couple of thousand revs – the area in which most modern turbocharged units start to feel tight.

The marriage with the eight-speed ZF automatic gearbox, which AMG doesn’t use, is a particularly happy one as well. It's refined under gentle use but swaps cogs practically as fast as a twin-clutcher under manual control or with the powertrain in its more aggressive Sport Plus and Track modes.

The Vantage is firmer and louder than the DB11, thanks to both chunkier chassis settings – the adaptive dampers lack a Comfort mode, with Sport their base setting – and a rear subframe that's mounted directly to the body without any insulating bushes, improving rigidity at the expense of refinement. It’s certainly not crude, but there's a fair amount of road noise evident beneath the exhaust note. Still, the car tracks impressively straight and accurately at higher speeds.

Onto twistier roads and the steering starts to really impress. The Vantage’s rack and its ratio are identical to that of the DB11, but the car's shorter wheelbase increases the effective ratio, making responses feel much keener. There’s plenty of front-end bite, even in the damp conditions we drove the car in, with corners giving the electronically controlled differential a chance to prove how clever it is.

The device can produce a huge 1845lb ft of locking torque almost instantly, but, unlike a conventional limited slip differential, can also fully disengage when not required. The result is outstanding traction, with the addition of some torque vectoring to sharpen responses yet none of the low-speed understeer that sticky mechanical lockers usually engender.

The engine has more than enough low-down torque to keep things interesting, especially with the stability control switched to its more permissive mode or full de-energised. But even when the Vantage is sliding, it never feels wayward or excessively lairy. Drivers are going to have a huge amount of fun in this car. 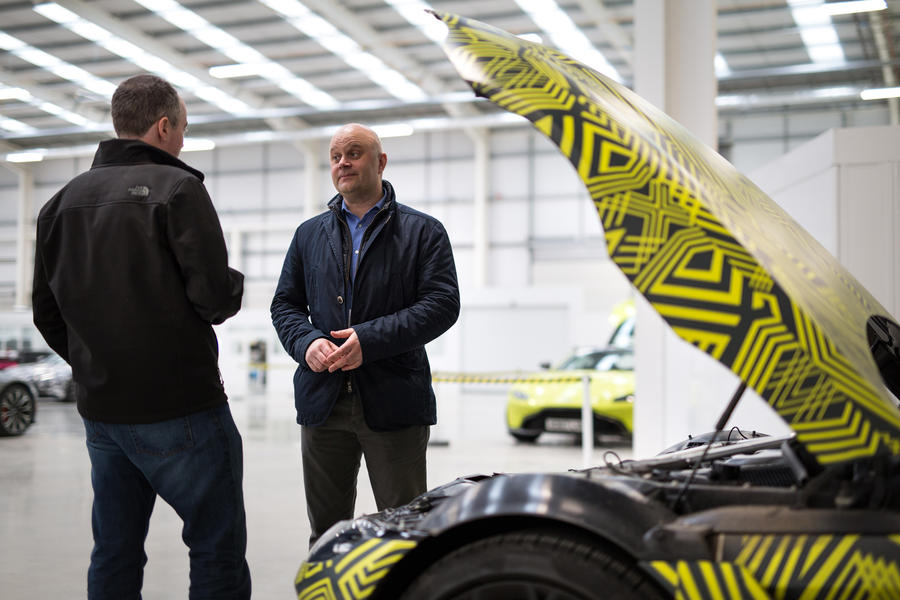 While the Vantage impresses in isolation, even in prototype form, the comparison we’re really looking forward to is finding out how close it runs the Porsche 911, which is Aston’s avowed target.

On the basis of our early experiences, we suspect the answer is going to be 'very'.

Yet the clever differential will also throw up another dilemma for potential buyers because Aston has confirmed that it won’t be offered on the seven-speed manual car that will be launched some time after the automatic.

Even those in love with changing their own gears are likely to find that a grievous omission. All things considered, we suspect the eight-speeder will turn out to be the better all-rounder.

Nice to hear the news.Car

Nice to hear the news.Car look stunning.want to ride atleast once .Thank you for the information.

The off-the-shelf someone else's engine completely ruins it for me -- absolute deal-breaker. An Aston should be an Aston, and for me that means it must have an Aston engine (which IMO the 4.3/4.7 V8 is). Without an Aston engine, how good the AMG engine may be simply doesn't matter. Remember that when the AMG deal was announced it was explicitly stated that Aston and AMG would collaborate on developing a bespoke engine for Aston Martin. Turned out to be a big lie. I would've been interested in this (though they've ruined the grille), but I'll be keeping my "old" V8 Vantage.

I've had several 911s and the previous (current?!) Vantage and would love one of these but it's just too much money.  Unless it depreciates savagely in the first year I've no chance  - plus I'd want a manual and finding one on the used market in a couple of years time would probably be near impossible anyway. Looks like I could be heading TVR's way again ...