From £87,4958
Aston Martin's swansong for its venerable Vantage sports car allows it to bow out with its head held high, yet the performance AMR sub-brand's first outing leaves you feeling short-changed
Open gallery
Close
by Dan Prosser
16 August 2017
Share

How do you send off a loyal and much-loved servant of 13 years? In the case of Aston Martin and the Aston Martin Vantage, you give it more power than it’s ever had and secure what will go down as its crowning glory - victory at Le Mans.

Having first been introduced way back in 2005 the Vantage will finally be retired this year, making way for an all-new model that’ll arrive in 2018. Far from fading away with a whimper, though, the car’s last year on sale has arguably been its most memorable yet. That GTE Pro class victory at La Sarthe in June came at the sixth time of trying - following one of the 24 hour race’s most thrilling last lap duels in living memory, no less - while a limited run of 100 V12 Vantage AMRs have had their power outputs lifted to a whisker shy of 600bhp.

Earlier this year Aston Martin launched its new AMR performance brand, taking inspiration from the Aston Martin Racing competition squad, and the departing Vantage is the first car to carry the new moniker. Eventually, every model in the range will offer an AMR version. The Vantage AMR will be limited to 300 units, 200 based on the V8 model and 100 on the V12. They’ll be split across Coupe and Aston Martin Roadster bodystyles, all offering a choice of manual or paddle shift transmissions.

Mechanically they’re identical to the mainstream models, Aston Martin except that the V12 versions have received some minor engine tweaks to lift power by 30bhp to 595bhp. There have been no weight saving regimes or retuned chassis settings, then. Instead, the Vantage AMR offers a number of bespoke paint schemes with contrasting body stripes and, in the case of this Stirling Green car, day-glo brake callipers. This car also carries enamel badges in Union Flag colours as well as bespoke five-spoke wheels. The eye-catching interior trim is also specific to the AMR. 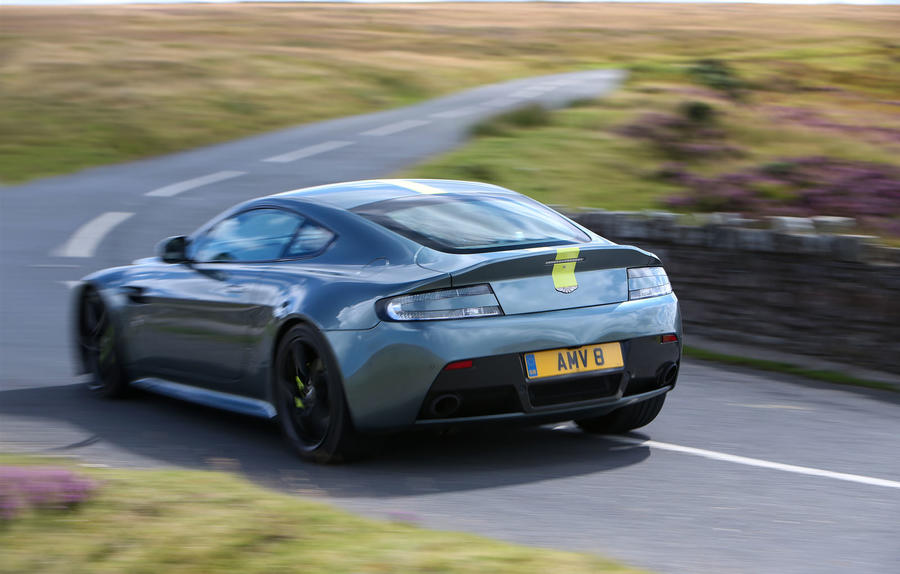 The tense, muscle-bound Vantage shape is so familiar now it’s easy to overlook just how pretty it still is. The lime green elements do sit at odds with the car’s understated beauty, though, and they’re bound to divide opinion as a result. If you don’t care for the bright stripe and show-off callipers you’re unlikely to be sold on the cabin; lime green piping flows down the dashboard and accents the seats.

The switchgear, incidentally, is now much better and easier to use than the fiddly controls that were fitted to early Vantages, although the clumps of buttons do look a little like the controls you’d expect to find on a mid-range microwave oven. At least the latest infotainment system is now intuitive and easy to navigate while the seating position is just about spot on. Having said that, the optional fixed back bucket seats are more supportive than this car’s conventional two-part chairs.

Everything about the Vantage AMR’s start up procedure and low speed nature makes you think it’s a hefty, burly sort of thing, as though it’s intent on giving you a good old workout. You have to press the oblong key surprisingly hard into its slot in the dashboard to fire the engine, while the clutch and gearshift have a certain weight to them. The fly-off handbrake that nestles between the driver’s seat and door also takes a bit of muscle to operate and the steering feels heavy. You’re reminded the Vantage is very much the sports car in Aston Martin’s line-up and not the effortless GT.

Accordingly, the Aston Martin Vantage comes into its own with a little pace. Whereas the low speed ride is very tight and fidgety, it relaxes markedly as the passive dampers come into their range over 50mph or so. There’s plenty of wheel travel and movement in the body, too, so the car actually flows along the road quite serenely rather than skipping and hopping along it manically. The steering relaxes with speed, too, feeling quite light and vague at first, but you soon tune into the steady stream of messages that pour back from the front tyres, wheel constantly fidgeting and tugging at your finger tips. No matter how good electrically-assisted racks may have become in recent years they’ll never match a hydraulic system like this for purity of feel and feedback.

Given that Aston Martin’s chassis engineers have had more than a decade to master the Vantage’s ride and handling it should come as no surprise to learn the car is simply brilliant to fling across a moorland road. It’s poised and agile, front axle clawing huge amounts of grip from the tarmac on the way into a bend. The rear end takes a fraction of a second to find its set in a corner, but when it does so the car feels perfectly balanced. Even when it’s loaded up in a bend in the chassis has enough in reserve to brush away a mid-corner bump or sudden depression with a single damper stroke.

The whole thing is just so well resolved. Whereas at low speeds the Vantage is hefty and demanding, at higher speeds it’s delicate and responsive. It’s quite a transformation. What this car never feels, however, is spectacularly fast. With 430bhp there’s enough performance to get the car clipping along very nicely indeed, but the 4.7-litre V8 never delivers a breathtaking whack in the back under acceleration, partly because of the relatively long gearing. There also isn't the power or torque to unstick the rear tyres at will. Aston Martin If you crave straight-line performance and thumping power, you’ll want the V12. However, the V8 Vantage has always been the sweeter and more precise of the two versions in handling terms.

It may not be a thundering powerhouse, but the eight-pot engine is wonderfully characterful while the soundtrack is evocative without being excessively loud or overwrought. The six-speed manual is the perfect partner for it, too, with a tight and mechanical gate that requires a deliberate hand. 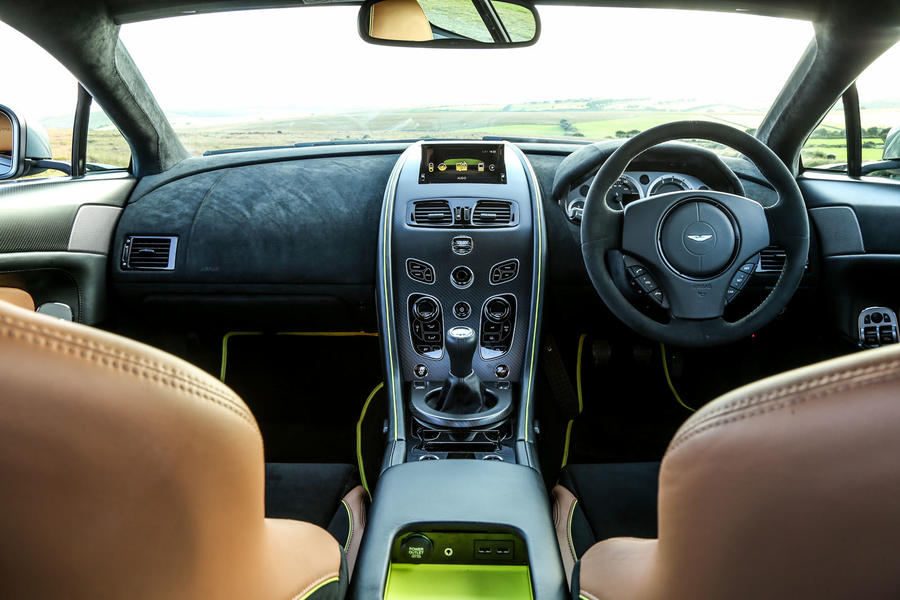 The V8 Vantage AMR is an engaging and rewarding sports car in the traditional sense. You have to work hard to get meaningful performance out of it - Porsche 911s and Mercedes-AMG GTs do all the work for you in comparison - but the rewards speak for themselves.

However, it does seem a shame that the car that introduced the new AMR brand to us is really just a sticker set and some garish interior trim away from being exactly the same as the standard model. The AMR tag should denote Aston Martin’s fastest and most focussed road cars. That might well become the case as further models are rolled out in coming months and years, but for now AMR doesn’t stand for very much at all. 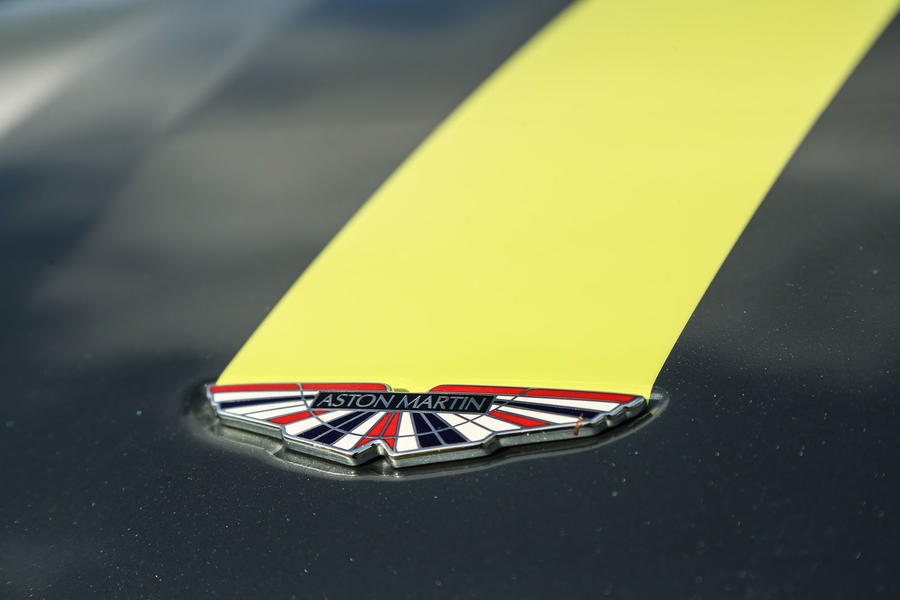 Thanks for reviewing V8 AMR,

Thanks for reviewing V8 AMR, it looks that the car carries so many features that are not available in similar cars in the same price range.

i have an N430 vantage as a daily driver and a porsche 991 GT3Rs  but i cn honestly say the vantage is as much fun as anything i have driven. its brilliant as its so analogue ..... actually i disagree with review- mione is a 430 bhp version and definately feels  punchy and more than fast enough for daily use. dont compare it to a 911- its copletely different animal and all the beter for that.

Very well said. The V8 Vantage isn't intended to be a 911, and it shouldn't be. It's a great Aston Martin, and it does that superbly. I have a MY09, manual with the Sports Pack, and after 8 years I love it as much as I did on delivery day. It's not just gorgeous to look at inside and out -- it's a great drive. It's also been perfectly reliable.