From £49,0359
'Exemplar of French sophistication' explores a more premium realm for the A110, where healthier profit margins exist
Open gallery
Close

Alpine has been busy of late.

Not only has it joined Formula 1, if only in name, but just like Jaguar it has also committed early to becoming an electric-only brand. Already there’s an entry-level hatch and crossover models in the pipeline, as well as something more sporting, to be co-developed with Lotus.

The arrival of the new Alpine A110 Légende GT is therefore very small fry. You might even now refer to the A110 in all its guises as Le Petit Dinosaure – a car propelled as it is by nothing more futuristic than a four-cylinder combustion engine, and one soon to be permanently consigned to its maker’s back-catalogue.

And yet, at £59,410 the limited-edition A110 Légende GT, of which only 400 examples will be built, is the most expensive Alpine to date, and that makes it worth discussing – particularly in light of where the brand is headed.

Because if parent company Renault is to realise its ambition of making Alpine self-sufficient to the extent that it can fund its own assault on Le Mans and entirely support its own racing endeavours across the board, it needs this historic marque to generate profit. And a fair amount of it.

The problem right now is that each A110 is (or is very close to) loss-making, which is what happens when you develop an all-aluminium sports car with double-wishbone suspension almost from the ground up, then sell it for as little as £48,000, in the case of the entry-level Pure.

But here's the thing: good profitability is something the mainstream makers usually achieve by combining sporting prowess with luxury. World-class engineering is simply not enough in the mass-market. You need opulence, too. It’s something Porsche does well, it's why Lotus isn't outselling Ferrari, and the very concept is what the Légende GT tentatively explores for Alpine.

So if you’re wondering whether £60,000 is pushing it for a four-cylinder machine without much badge-recognition outside enthusiast circles, so are Alpine’s product planners.

Well, probably. What the Légende GT makes us ponder is just how comfortably the luxury approach sits with something that shares parts with much cheaper Renault hatchbacks. Indeed, how far upmarket can you push the Alpine brand, as we know it now? 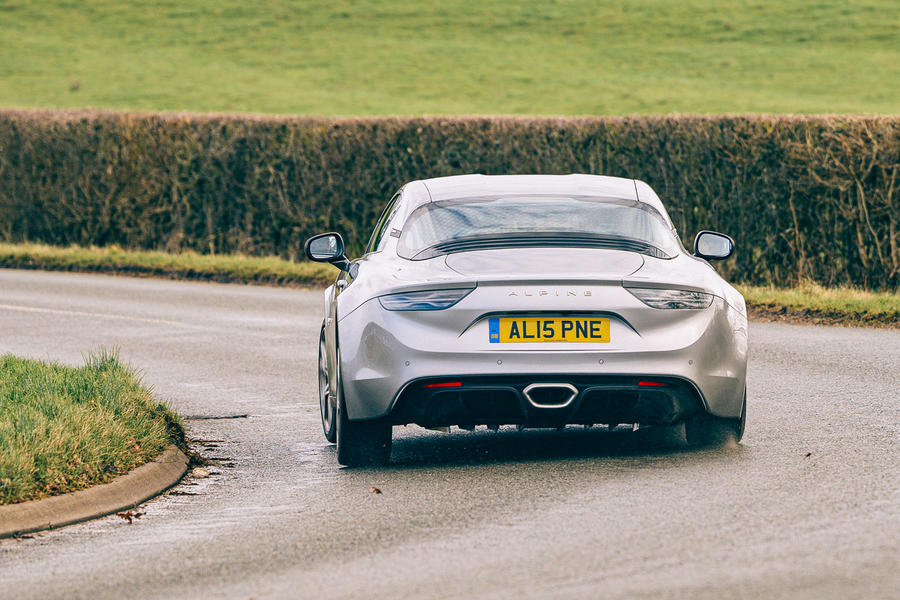 What makes an A110 Légende GT is purely cosmetic. The mid-mounted 1.8-litre turbo engine makes the same 249bhp as it does in the basic A110 Pure, and its efforts are put through the same seven-speed dual-clutch ’box and open differential.

Being billed as the A110 you’d choose for touring duties (the only real concession for which is a fraction more storage space between the seats), the car’s passive spring-and-damper setup is then the same relaxed setup you’ll find on the regular A110, rather than that of the more tautly suspended A110 S. The car also continues to wear Michelin’s Pilot Sport 4 tyres, which are grippy but not overly so and superbly progressive.

As standard, the Légende GT is also fitted with Alpine’s crackling sports exhaust and upgraded Brembo brakes, which make light work of the car’s 1123kg kerb weight and do so with a good degree of confidence-inspiring resistance in the pedal-weighting.

If there is any change that can claim to alter the car’s dynamic disposition, it’s the wheels. They’re unique to the Légende GT and look sensational – even more so in this spec, as their pale gold plays so nicely against the rich Mercury Silver paint of the body. Perhaps their intricate design adds some unsprung mass, though you’d struggle to notice it.

The exterior is otherwise unchanged, except for the badging, which comes in the same colour as the wheels. It’s subtle and works well – better than the vivid copper accents found on various current Cupra and Land Rover models – and overall the Légende GT really does seem more sophisticated and, yes, expensive than the regular model.

From the outside, it’s the kind of car that has friends and family asking you how much it costs, and they’re then often surprised to hear it’s not closer to six figures. Even if the brand is relatively unknown, the product comes across as credibly exotic, though in truth even the regular car achieves this.

Inside arguably matters more, though. This where the regular A110 falls down a little with hard plastics, some questionable ergonomics (notably the stubby gearshift paddles) and the odd bit of play in the fixings.

In truth, the Légende GT is largely unchanged in all these areas. The pleated-style caramel bucket seats – which are superbly comfortable, if fractionally high-set, and heated – do most to lift the interior atmos, though the benefit is offset by the copper-flecked carbonfibre trim on the binnacle cowling, vent surrounds and centre-console. It feels disappointingly cheap, and a little misconceived.

The most expensive Alpine does better in the quality of its stitched leather dash and 'metal-dipped' trim. However, as in the regular car, both are undermined by the plastic panels where you wouldn't expect to find them and some flimsy switchgear. It's a shame because, with a some targeted improvements, the Légende GT could probably pull off 'opulence'. If I were Alpine, I'd probably try to emulate what Alfa has done with the interior of the Giulia Quadrifoglio, only with more colour.

As for the the driving experience, it remains as joyous as ever: the A110 is so light on its toes, so deft in its direction changes, and seemingly able to work hand-in-hand with the topography of any given road. Nothing in this class feels so… free when it's on the move, though the adjustability works both ways.

This chassis isn't quite so stable and forgiving as that of the Porsche 718 Cayman, so requires a cool head and calm hands on wet B-roads, lest some sudden weight transfer catch you out. It all adds to sense of involvement, though. Few car so instantly recognisable in their dynamic behaviour, and when the rear suspension is loaded up the car is just so communicative and biddable. Delicious. 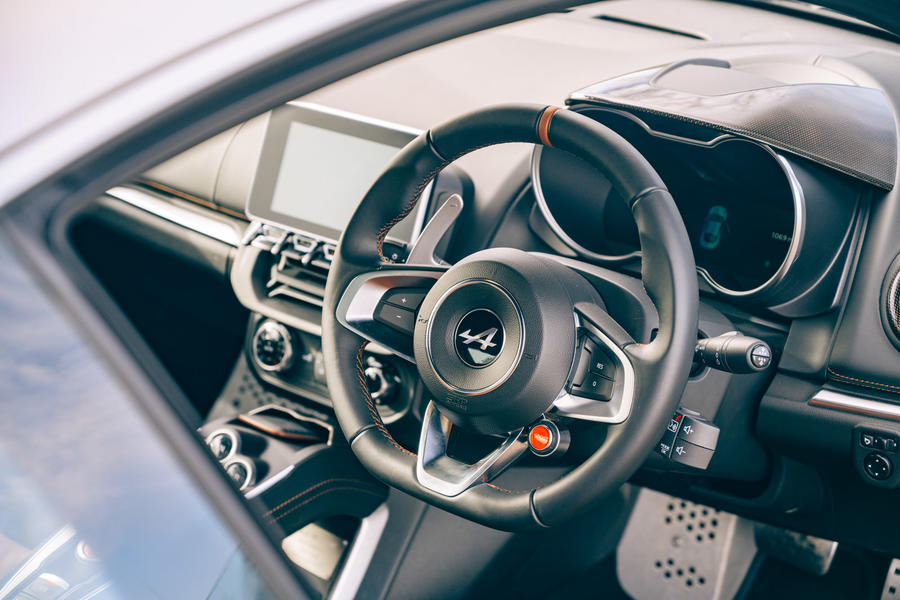 You can’t – at least from new. All 400 examples of the Légende GT are spoken for, which I suppose answers the question of whether £60,000 is pushing it for the four-cylinder Alpine A110. Evidently it is not, though rarity will have helped the car’s cause.

But even were it not limited, this kind of money is not at all unreasonable when you consider even the basic the A110 in engineering terms. Architecturally, the French car is more supercar than the 718 Cayman, and much more bespoke in feel than an M2 Competition. That said, for less than £5000 more than what this Alpine costs, you can have six cylinders in the Cayman GTS. Ultimately, you can argue the value-for-money case both ways.

What Alpine should recognise is that while the Légende GT’s unique cabin additions give it a lift, there remains something of the toy car about the place. In some ways that charming, but not when you're talking about materials.

If Renault wants future Alpine models to sell in volume and generate good profits – if, in a nutshell, it want them to be seen as luxury products – it needs to focus on delivering an interior ambience to match the superb chassis engineering. The Légende GT in a step in that direction, but no more. 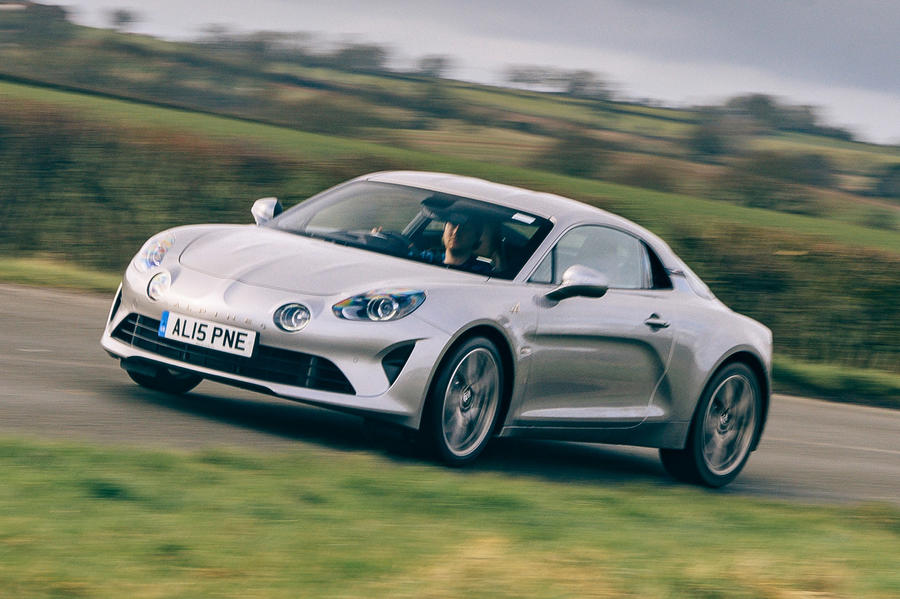 I suspect this interior is as well built as a MacLaren and they cost north of £150k. Anyone who has to go up against Porsche on build quality is always going to struggle. A 718 GTS would be great to own but the Alpine is clearly a special unique car and I'd be delighted with either.

A lot of words wasted on a car that will sell in tiny numbers.

Alpine, like Jaguar, will wither on the vine if tasked with taking on the likes of Porsche, Ferrari, Bentley etc.

It doesn't matter what the profitability number is, if too few see value in the products or brand.

Just makes the end of the elise more painful.