BACK TO ALL NEWS
Currently reading: Used car buying guide: Alfa Romeo 145 Cloverleaf
UP NEXT
How the Bugatti Chiron became the first 300mph road car

Tidy examples of Alfa Romeo’s junior hot hatch of 1995-2000 may now be scarce, but find one and you’re in for a great deal of fun
Share
Open gallery
Close
Share story

Chris Bangle is not only one of the best-known car designers of his time but also the most divisive. Think of the Fiat Coupé, BMW Z8 and Rolls-Royce Phantom: names you can’t mention to petrolheads at the pub for fear of sparking a brawl.

But you would be hard-pressed to find fault with one of his earliest mainstream efforts, the adorably squat and purposeful Alfa Romeo 145. Originally destined to be the new Lancia Delta (until Fiat Group design director Ermanno Cressoni nonchalantly declared the breadvan-shape mould in the wind tunnel to look more Milanese), it was developed over four years as Turin renewed its assault on the burgeoning family hatchback market.

Its rarity in the UK today compared with that era’s Ford Fiesta and Vauxhall Corsa demonstrates how effective that was, but who cares? It’s far better-looking than any contemporary, and collectors know it.

The sweet spot of the range was the Quadrifoglio (that’s Cloverleaf for you xenoglossophobes), which borrowed the naturally aspirated 2.0-litre 16-valve Twin Spark from the larger 155. That engine, with its four valves per cylinder and variable valve timing, sent 148bhp (153bhp in later, ‘Phase 2’ models) to the front wheels through a five-speed gearbox.

It got the car from 0-60mph in just over eight seconds (impressive at the time) and onto a 129mph top speed – figures that worry today’s 1.5-litre Mazda MX-5. 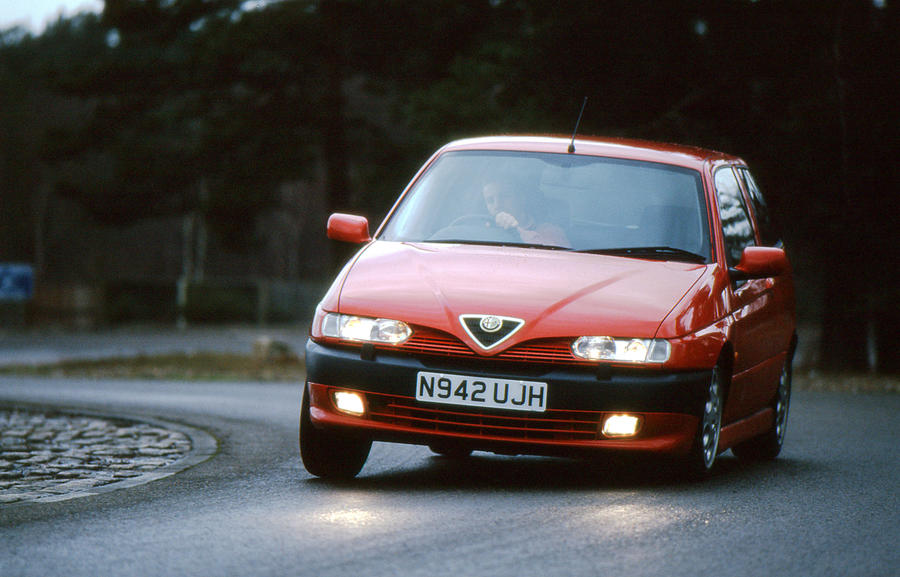 The chassis also won praise from reviewers, with the Fiat Tipo-derived suspension of the standard 145 upgraded to provide quick turn-in response and minimal torque steer – characteristics largely unheard of in front-wheel-drive hot hatches of that era. The dashboard may have been dated and the seating position strangely high, but this was a bona fide driver’s car for the masses, and survivors are today all the more desirable for their exclusivity value.

Roughly 270 examples of the 145 Cloverleaf are said to remain in the UK, combining those taxed and those SORN (compare that with 4000 Mk3 Volkswagen Golf GTIs), so they’re hard to find, but prices remain within reach for the casual enthusiast.

Autocar actually bought a 145 Cloverleaf back in 2010 for £1100, judging it a rarer and more exciting alternative to other ’90s hot hatches.

The styling had stood the test of time well, as is still the case, while the engine was strong (albeit perhaps not original to the car). Unfortunately, though, its appeal was dampened by a “baggy” manual gearbox and an “embarrassing” amount of body roll.

Nonetheless, our testers remained impressed by its performance with 165,000 miles clocked – right up until a particularly hard turn revealed the fuel filler wasn’t sealing properly…

Prices haven’t changed too much in the decade since that incident; you can still grab a usable 145 Cloverleaf for little more than £1500, despite the model’s increasing rarity.

It goes without saying that any 145 will look great sitting on your driveway. But take care, because it’s destined to remain there if you don’t give it the proper care and attention. 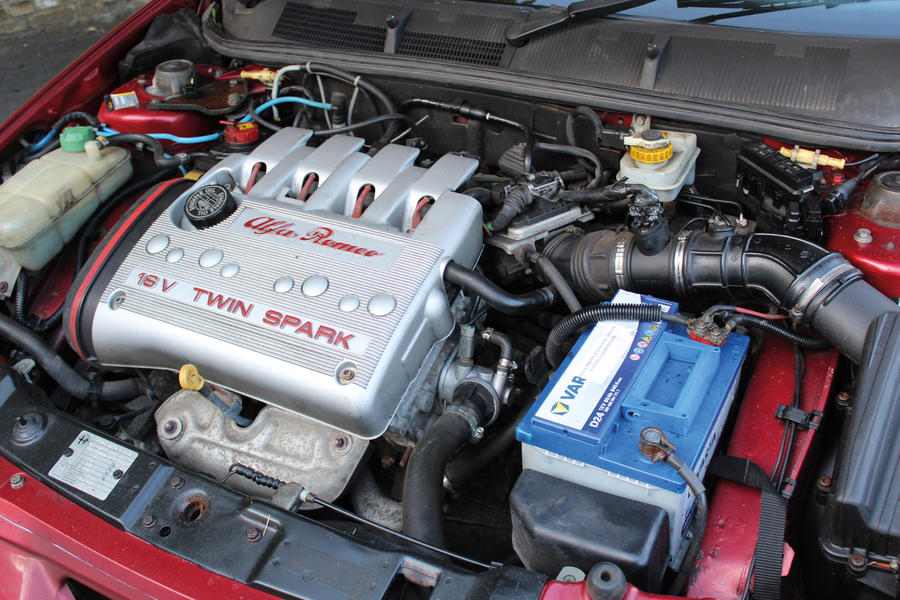 Ian Stamper, Autobritalia: “I haven’t seen one for years. It’s sad: they were good cars, but corrosion did get the better of them. It usually starts around the rear axle mounting area by the door seals. But like all Alfa Romeos, there’s an inconsistency: you can never say that all cars will rust in the same place, because they don’t.”

■ Engine: Specialists mandate that the cambelt and tensioner need changing every 36,000 miles (or every three years, whichever comes first), and it’s a good idea to replace the cam variator at the same time if the engine rattles like a diesel on start-up. The Twin Spark does use a bit of oil, but excessive consumption is cause for concern.

■ Bodywork: Red cars fade over time, resulting in patchy two-tone paintwork, but your main area of concern should be underneath, where rust can eat away at the joins between the floorpans and sills. The spare wheel well, rear footwells and front bumper mounts are common weak spots.

■ Electrics: Airbag sensor under the driver’s seat can fail, causing the dashboard warning light to stay on. If the lights don’t illuminate at all, check the bulbs haven’t been removed by a shifty seller. Electric windows slow down with time and like to pop out of their runners, but a good spray with lubricant will free them up.

■ Suspension, steering: Worn front wishbones will cause the tyres to wear unevenly. At the rear, check dirt hasn’t eaten away at the radius arm bearings and go for a drive to see how the car rides. If it’s wallowy and boat-like, the shock absorbers need replacing.

■ Gearbox: As we noted back on our 145 back in 2010, the manual gearbox didn’t age well and is likely to need rebuilding if the car has been driven hard. Check for sluggish and vague throws. Second-hand units are available from breakers, but Phase 1 and Phase 2 cars used different shift mechanisms, so do your research when looking to replace.

From January 1997, the Twin Spark engine was rolled out across the entire 145 line-up as a replacement for the much-maligned boxer engine, while 1.8-litre models were made available with the sporty suspension, steering, brakes and seats of the top-rung Cloverleaf model. These models remain affordable today, albeit extremely rare, and are an attractive alternative if you don’t mind forgoing the Cloverleaf’s distinctive alloys.

£1000-£1999: Usable cars that need some TLC to pass their next MOT. Look for faded paint, unoriginal rims and tatty interiors. 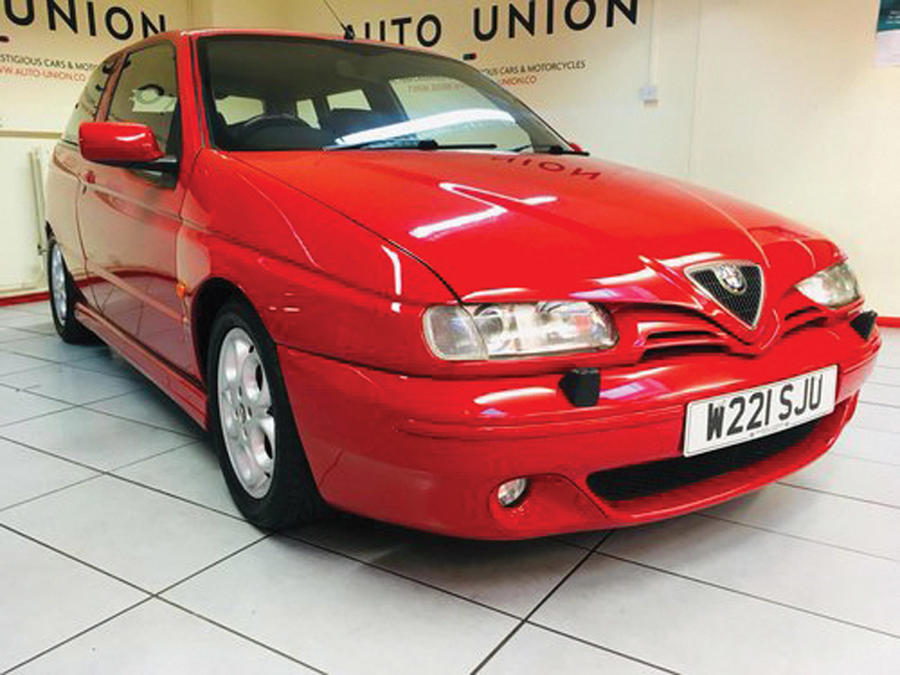 Great lookers but I always

Great lookers but I always preferred the notchback style of its 146 sibling.
Peter Cavellini 11 May 2020

So, four grand for a good un?, still going to rust like crazy, not an investment either.

One of Mr Bangle's designs?

I wasn't aware that was the case, although I do remember the description "bread van" being used, albeit disparagingly.  I think it started that V-shape to the bottom of the tailgate glass that SEAT, especially, took up.