BACK TO ALL NEWS
Currently reading: BMW E39 5 Series: Autocar buys a modern classic
UP NEXT
Ford backs call for European ban on new ICE cars from 2035

With prices at rock bottom, it's time to buy that older model you've always dreamed about. So we did
Open gallery
Close

We say it a lot, but Autocar’s road testers provide the most comprehensive new-car buying advice you can find. Each review they write is packed to the gills with helpful outlines of a particular car’s strengths and foibles and is a must-read for any prospective buyer of that vehicle.

But none of that is much use when you’re approaching a busy junction in a car you’re considering buying – with the current owner in the passenger seat and a bus behind you – and the engine dies. Should you ignore it or address it? Is that cause enough to walk away from the deal? What I did – and what you most definitely shouldn’t do when test-driving a potential purchase – is turn to your co-pilot, ask if it really did just cut out and be satisfied when they reply: “Erm, no, I don’t think so…”

And so it was with this E39- generation BMW 5 Series saloon, which, in spite of its overwhelmingly evident reluctance to come home with me, now takes up 8.46 square metres of my driveway outside.

We’ve always liked the E39. Enthusiasts say it’s a must-drive and our sibling title What Car? recently named it one of the best cars in its 47-year history. So when this example was listed online for less than £1000, with some of the blurriest and most unclear pictures ever taken, it had to be worth a look. 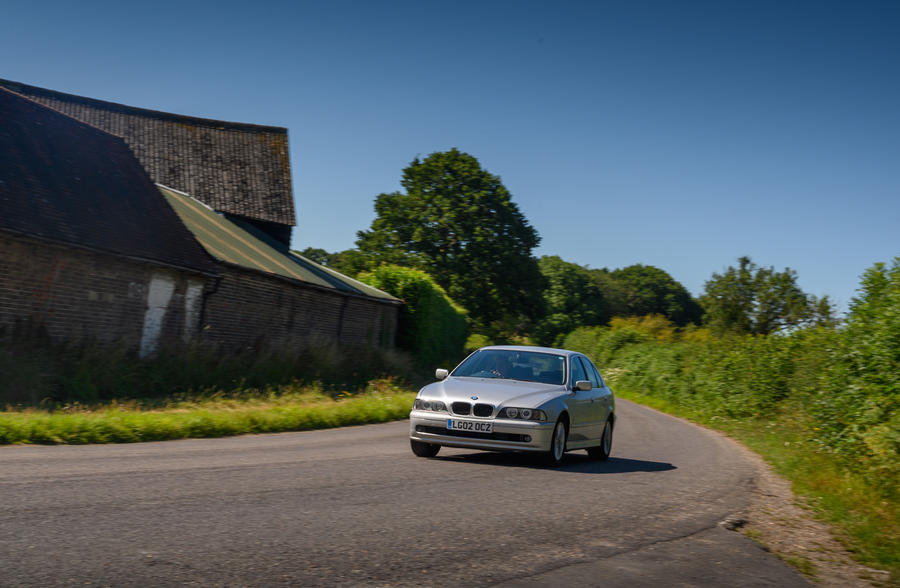 At least I did something right: never trust the photos. It had clearly been sitting for longer than the “couple of weeks” alleged by the seller (the tyres were cracked, the wipers were useless, the headlights were milky and my arachnophobia meant I couldn’t go anywhere near the wing mirrors), but this was a clean car – outwardly, at least.

Having been assured that the engine hadn’t been warmed through ahead of our arrival, it was a surprise when it instantly cranked into life and settled into a steady idle, although slightly worrying – and perhaps foreboding – was the seller’s proud proclamation to have recently replaced the injectors themselves.

Elsewhere, this 18-year-old motorway weapon wore its 120,000 miles well. Its Titanium Silver paint was shiny, all its electrics worked and even its locking wheel nut and original jack were present and correct. Small pleasures, maybe, but this car cost the equivalent of £50,000 when it was new and was now being offered for the price of a week’s holiday in Cannes.

Viewing a car of this vintage, though, is as much about gauging investment potential as it is about having fun, even at this end of the market. Going for a car when its price has bottomed out – as this example’s surely has – is especially appealing, because you’re more likely to at least recoup your initial outlay. 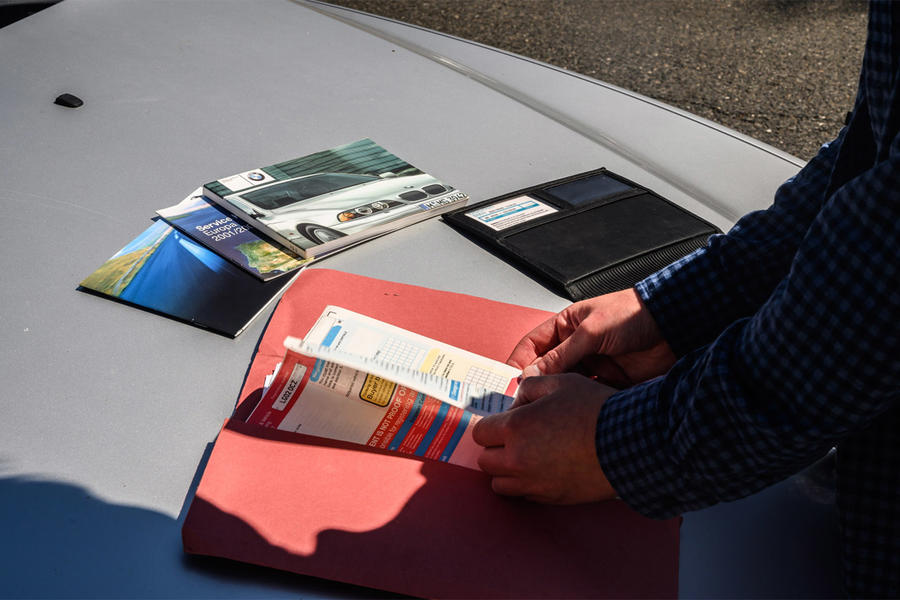 It’s the same story with many other not-quite-classic cars: a 2003 Mazda RX-8 can be nabbed for around £1000 and a V6-powered Rover 75 Tourer asks just £795, for example. Provided they’re fighting fit, you could get a couple of years use out of them and claim a tidy profit when it’s time to sell. Repair costs can spiral, however, and quickly exceed the value of the car, so don’t be sucked in at first glance by tidy bodywork or a seemingly healthy motor.

Back to the BMW, and having been sucked in at first glance by its tidy bodywork and seemingly healthy motor, it was time to hit the open road. There are two schools of thought when testing a car this well used: become increasingly paranoid with every passing judder and cough before eventually abandoning the transaction or turn the stereo up so you can’t hear such foibles and crack on. Obviously, if the car should fail to proceed at any point on such a short trip, there are clearly some underlying issues at hand, and buying at such a low price point means they’re unlikely to be economically viable to fix. But when I and the car’s then-owner unexpectedly coasted to a halt at a crossroads somewhere in south-west London, it had already been all but decided that money would change hands. Happily, it has since behaved itself, so that has been optimistically marked down as a nervous hiccup. 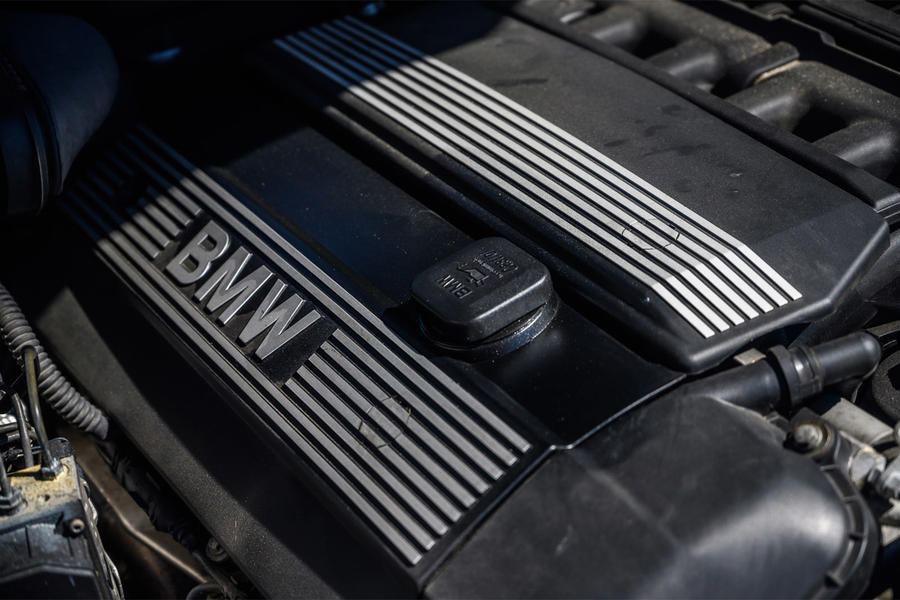 Of course it had to come home. All too often are cars of this ilk modified beyond recognition – fitted with gaping exhaust pipes, ill-advised lowering kits, badly tinted windows and illegal numberplates – and it stands to reason that future enthusiasts will hold original-specification examples in higher stead.

So what if you can’t plug in your iPhone, backfire at will or do a burnout? BMW’s engineers – as we know from various five-star Autocar road test verdicts – are well versed in the art of building an executive saloon, so a factory-spec example is all the more desirable.

This particular car is the entry-level 520i, and although its 2.2-litre straight six emits that trademark naturally aspirated six-cylinder hum and sends its power through a five-speed manual gearbox, be under no illusion that it shares any character traits with the legendary E39 M5.

Tipping the scales at 1700kg, the 520i’s performance is best described as leisurely, which is good news for the insurance company but rather embarrassing when you get flashed out of the fast lane on the M40 by a Chevrolet Matiz.

That said, swapping out the perished tyres for a set of value-friendly but pleasingly sticky new items has transformed the handling, and a pair of wiper blades for £16 is a supremely cheap lifesaver. It’s best not to get carried away with spending money on a bargain banger such as this unless it needs critical care and you’re confident about getting that money back. 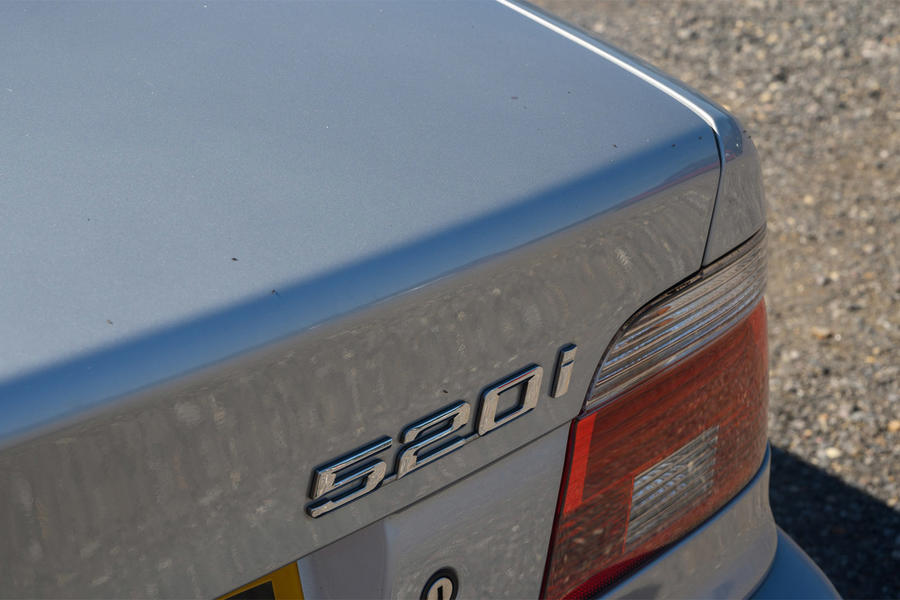 Another thing to bear in mind when buying what you might call a future classic is just how often it will be used. More recent models will generally be less susceptible to tinworm and water ingress, so dry storage isn’t essential, but no car likes to be left unattended for long periods. That’s why it’s worth going for a well-made model that will stand up to a bit of abuse and that’s less likely to leave you stranded on the way to that important meeting, so you feel more inclined to use it as a daily driver.

This is where this E39 really comes into its own: despite the complexity of its double-Vanos variable timing system and unquenchable thirst for unleaded, it’s quiet, sits comfortably at motorway speeds and is popular enough for common faults to be well documented on the wealth of online forums, so it’s nearly as practical as its modern-day descendant.

So, what have we learned? A car doesn’t have to wear wire wheels or semaphore indicators to be considered a classic and buying a more recent model is cheaper and less dependent on specialist knowledge. Just be sure to drive it carefully, treat it to good-quality serviceable items and enjoy it while you can, because a quick browse of any enthusiast forum will tell you that “they really don’t make ’em like this any more”.

I own a facelifted model 3.0 Msport, hydraulic steering, creamy six cylinder, creamy ride quality too rack and pinion on the sixes, recirculating ball for the V8's (based on e38 front end). So well engineered it must have taken a lot do design such a great vehicle. I think they left the windscreen wipers the "wrong way round" just so there was something to complain about otherwise brillant. Those turbine style wheels were great on the SE models. Oldie but really goodie, the feeling of solid engineering pervades at all times.

I don't do high milage and have had mine for about 14 years or so, it will be a tough act to follow despite the cars age. I'll leave that to the future.

It must be E39 season because Doug.D just put another video up about the E39 (M5), most only wax lyrical about the M5 but all of them were 6 cylinders and all of them were good in fact the E39 was so good there wasn't anything left to do and then we got the E60...I'll leave that story to the lovers of that model.

"They'll have to pry it out of my cold dead hand"

Weren't these criticised at

Weren't these criticised at the time for their lack of steering feel because of a recirculating ball set up instead of rack and pinion? Or was that a different model.

Either way a brave move with the cut out on test drive. Owner changed injectors shouldn't be an issue, they aren't usually that difficult to change, though on a BMW 6 I wouldn't know to be fair, but just like the rest of us, you ignored all the used car buying rules, when we see something we like, I am very guilty of that, I am easily woo'd.

Weren't these criticised at the time for their lack of steering feel because of a recirculating ball set up instead of rack and pinion? Or was that a different model. Either way a brave move with the cut out on test drive. Owner changed injectors shouldn't be an issue, they aren't usually that difficult to change, though on a BMW 6 I wouldn't know to be fair, but just like the rest of us, you ignored all the used car buying rules, when we see something we like, I am very guilty of that, I am easily woo'd.

4 and 6 cylinder E39s had the rack and pinion setup, the V8s used the recirculating ball arrangement I think.

Lots of cheap examples of these around, but as ever it's a case of buy the best one you can find and make sure you have a cash reserve when the inevitable big bill comes up. Very tempting though, I love the dials and pop up cigar lighter!