It was inevitable, really.

When BMW first set about electrifying its line-up with an extended range of plug-in hybrid models a few years back, its initial focus was very much on fuel economy and lowering CO2 emissions.

But as premium brand rivals have entered the scene with newer - and arguably better - executive car choices, the German brand has added a new and important facet to its increasingly popular petrol-electric models: performance.

Proof of this comes with the new four-wheel-drive 545e xDrive. It forms part of the recently facelifted 5 Series line-up that's due to land by the end of the year, building on the basis provided by the popular 530e, global sales of which now top 50,000.

Driven here for the first time in pre-production form, it picks up developments already seen on the larger 745e xDrive and X5 xDrive45e, most notably a six-cylinder petrol engine in place of the smaller and less refined four-cylinder unit found in the 530e.

The turbocharged 3.0-litre engine is borrowed from the 540i, where it develops 329bhp and 332lb ft. It operates in combination with the same 107bhp/196lb ft gearbox-mounted electric motor already used by the 530e, with a 12kWh lithium ion battery mounted underneath the rear seats and boot providing electrical energy.

Together, the two power sources endow the 545e xDrive with a total system output of 388bhp and 442lb ft of torque, or some 101bhp and 133lb ft more than the more fleet-friendly 530e.

The added weight brought on by the larger combustion engine and four-wheel drive means the 545e xDrive cannot match the 530e in terms of CO2 emissions and overall electric range. Still, at 38g/km and 34 miles on the WLTP cycle, it is remarkably efficient, given its strong performance slant. Top speed in electric mode, like that of the 530e, is 87mph.

The impressive efficiency is achieved, in part, through an adaptive recuperation program that uses information from the 545e xDrive’s navigation system to optimise its running over any given journey.

Underpinning its role as the more performance-oriented of BMW’s five 5 Series plug-in hybrid models, the 545e also receives staggered wheel and tyres, those up front being 245/40s and those at the rear 275/35s. Buyers get to choose between standard 17in and optional 18in or 19in rims. 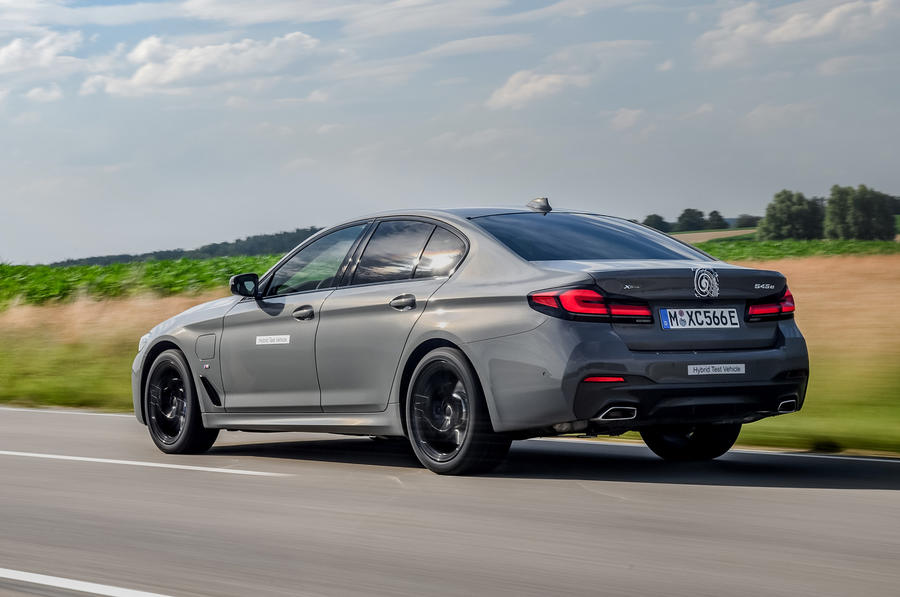 The taped-over BMW badges give the game away. We’re driving a 545e xDrive prototype here – a remarkably well-sorted one at that. We’re told it carries all the latest developments that will be incorporated on production versions, which will begin running down the line at BMW’s Dingolfing factory in Germany in November.

The exterior reflects all of the various detailed design changes brought to the facelifted 5 Series line-up, including a new-look grille, which is now wider and positioned lower than before. In keeping with other recent new BMW models, it receives a new single-frame design, with a central element in chrome, and sits within a reprofiled front bumper.

Changes have been made to the headlights as well. They receive distinctive new graphics, with L-shaped daytime running lights and indicators located at the outer edges. They are LED as standard, although buyers can also specify the Matrix main beam and laser light options – as fitted to our test car – to give the 545e xDrive a highly technical look.

A flap within the left front wing hides the port for charging the battery, which can be topped up from empty in a claimed 3.6hr at a rate of 3.7kW.

The interior is more subtly evolved. The reworked digital instruments offer up a bewildering amount of information, although thankfully they can be tailored with different skin options via a button on the multi-function steering wheel. There’s also the latest, seventh-generation version of BMW’s iDrive infotainment system, along with either a standard 10.3in or optional 12.3in central display, and an optional head-up display unit. The air conditioning controls are reworked, gaining a new display alongside revised materials and gloss black centre console details.

It’s an appealing and comfortable driving environment with generally intuitive controls that can be enhanced through optional speech and gesture functions. Despite being a prototype, the finish and overall feeling of quality throughout is excellent.

There’s a choice of three main driving modes: Electric, Hybrid and Sport, each accessed via buttons on the centre console, which also houses a separate control labelled Battery that allows you to use the combustion engine as a generator to top up the battery.

You can easily tailor the 545e xDrive to your liking by toggling through the various driving modes. Far greater efficiency can be found by simply sticking it in Hybrid mode, though; it automatically chooses the best possible means of propulsion for any given driving situation, dependent not only on speed but also topography and other factors.

So configured, the 545e sets off under the power of the electric motor with the synthesised tone of a Hans Zimmer-developed soundtrack played back through the speakers. With sufficient battery charge, it's capable of running for quite lengthy periods without the combustion engine being fired. Off-the-line response and low-speed pick-up is really quite impressive in urban conditions.

When the combustion engine does awaken, either via a well-planted throttle or a depletion of battery charge, it does so in a barely perceptible manner; the smoothness of the six-cylinder engine instantly provide the 545e with greater mechanical refinement than the four-cylinder 530e at all times. It's far more potent, too.

It pays to keep an eye on the suggestions indicated in the instrument binnacle and head-up display; by lifting off on lengthy descents, you can often recuperate a mile or so of electric range as the engine is shut down and the brake energy regeneration harvests kinetic energy.

It is in Sport mode, though, where the 545e really comes alive. It configures both the engine and electric motor to run continuously and work together instantly, rather than switching between the two, providing the 545e with truly rapid performance that's perceptibly stronger than in Hybrid mode. On the autobahn, the car accelerates in a wonderfully smooth and subdued manner into triple-figure speeds without any hint of hesitation or strain, feeling a lot like a V8 in character.

There’s a decent amount of heft to the steering, but with BMW’s Active Steering system, which comes as an option, providing additional steering assistance to the rear wheels, the 545e is remarkably agile, both at low speeds around town and out on the open road. Despite the weight of the battery at the rear, it feels terrifically well balanced when pushed along. The four-wheel drive system also ensures that traction remains strong at all times.

Although the prototype we drove featured an optional M Sport suspension package, the ride height remains the same as that of standard 5 Series models, due to the substantial weight. Body control is outstanding, as is the ride, which, although quite firm, deals with bumps exceptionally well, thanks to the fast-acting qualities of its adaptive damping control.

The 545e isn't without its drawbacks, though. The need to alter the positioning of the fuel tank to make room for the battery has robbed it of 120 litres of luggage capacity compared with its conventionally powered siblings, at 410 litres. The regenerative braking function also gives the brake pedal a curiously overservoed feel. 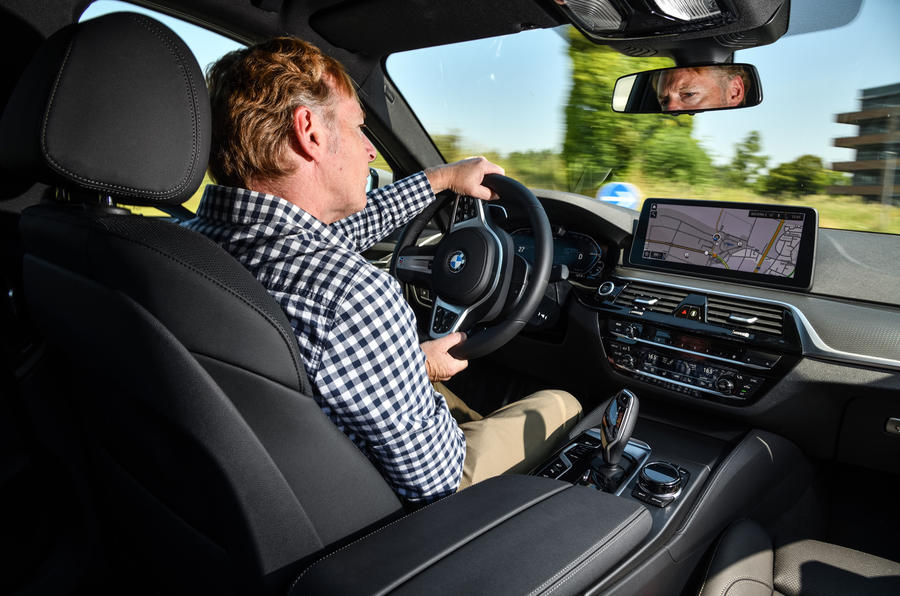 The 545e will only be offered in saloon guise at the start of sales. However, BMW suggests a more versatile Touring model is likely to join the line-up in time. Unlike the 530e, which comes as standard with rear-wheel drive but can also be ordered in four-wheel-drive form, the 545e only comes with four-wheel drive.

Even so, it is well worth a look, not only for its tax benefits for company car drivers but also for its enticing combination of performance, dynamics and refinement, all of which set new standards for plug-in hybrids in the class.

It’s a highly complex car, granted. But it’s also one that rewards on many fronts. The best 5 Series model of the facelifted range? We’ll need to drive all the various petrol and diesel models, not to mention its 530e sibling, before coming to a definitive conclusion, but as far as plug-in hybrids go, the 545e is far more enjoyable to drive than most. 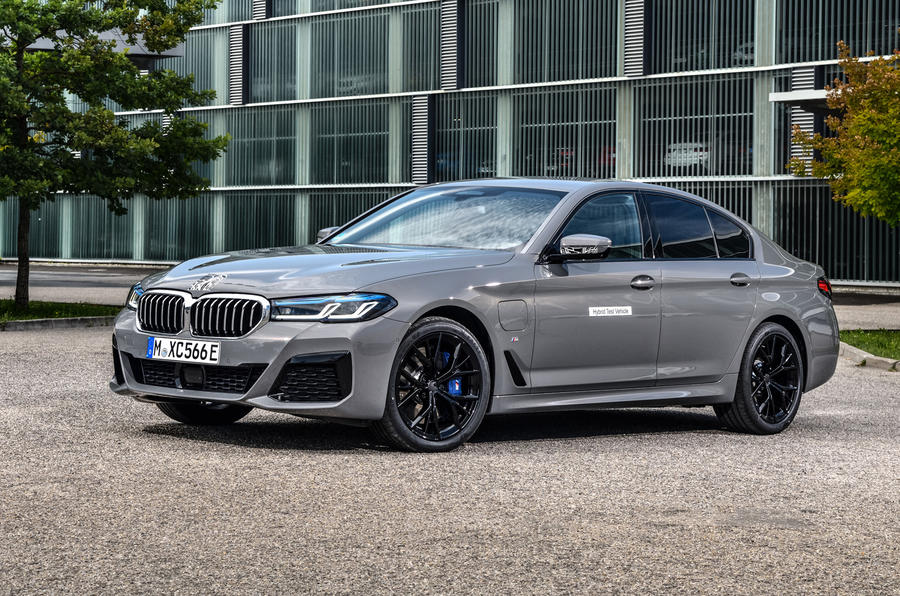 Only For The Brave

Theyre doing it all wrong,

Theyre doing it all wrong, the engine is too big and the motor too small, they should use the 3 cylinder from the i8 with a bigger (or another) electric motor so the power is split equally between combustion and electric and a smaller tank and slightly bigger batteries.

Are the horsepower figures correct? They seem underwhelming considering the 3.0 engine.

Are the horsepower figures correct? They seem underwhelming considering the 3.0 engine.

It's quoted as being fleet friendly, £55K ? , is that friendly to you?