Even if the E39 BMW M5 (1998-2003) had never turned any of its four, bespoke 18in Chrome Shadow alloy wheels (they’re easy to kerb and about £150 each to repair), we’d still be talking about it for its exhaust note alone. Idling, the 394bhp 4.9-litre V8 with double Vanos variable valve timing, eight throttle bodies and a free-flow exhaust is full of menace. Provoked, it explodes into vein-popping rage.

Lotus Carlton of 1990 conveniently to one side, the M5 is often credited with firing the starting gun on the modern-day saloon horsepower race, whose present pace-setters include the 552bhp M5 and 577bhp Mercedes-AMG E63 S. And the next M5 is expected to produce more than 600bhp.

But as any fule kno, it isn’t how fast you go, it’s how you get there – and getting there in the E39 M5 is still, 18 long years after the first cars took to the road, a thrilling and involving experience. BMW’s M division already had a great chassis to work with, to which it added beefed-up suspension, a limited-slip differential and sharper steering (no small achievement considering it was a recirculating ball set-up), while lowering the ride height. Ventilated discs allround and, by today’s standards, a rather interventionist ESP system (some owners switch it off) completed the changes. Add a Sport button and a six-speed manual gearbox (the throw is a little long but the shifts should be precise) and the M5 was ready to play. 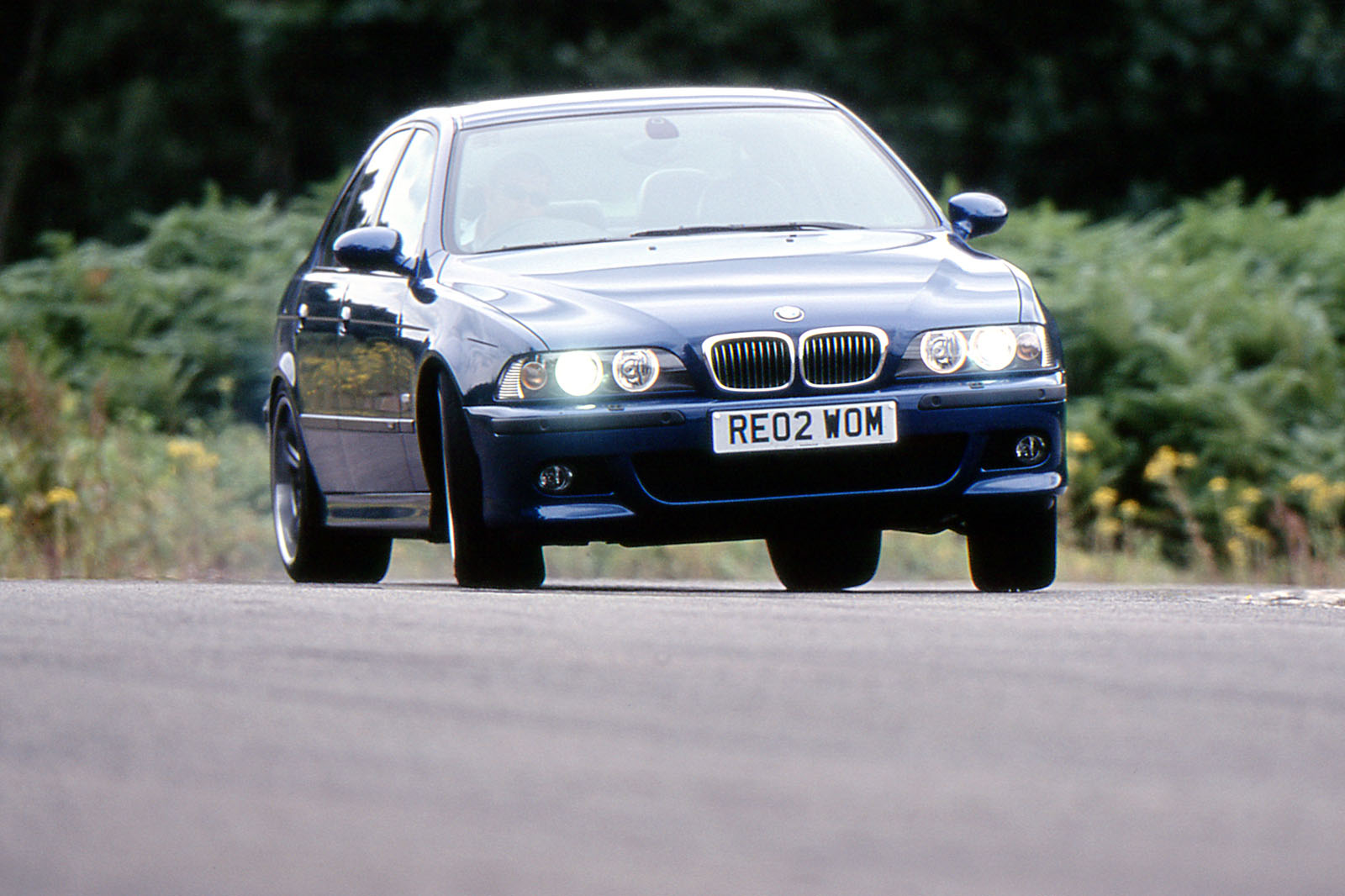 And to work. Which is the great thing about the M5: not only does it delight your senses but it’ll also carry your briefcase and your family (and their luggage) as it does so. A worthwhile option was through-load rear seats. The interior is as tough as old boots (rattles are rare) and trimmed in high-quality leather. It’s why you need to probe it carefully for signs of abuse, because it’s too manly to let on. You’ll want for little in terms of equipment. Most cars had sat-nav, but subsequent owners will probably have swapped it for something more up to date. Options included massage seats, a TV and rear screens.

A facelift in 2000 brought so-called ‘corona ring’ headlights, updated rear lights and front parking sensors to partner the ones already at the back. The wide M5 kidney grille, front air scoops and quad exhaust were carried over. Take these away, plus the 245/40 ZR18 front and 275/35 ZR18 rear rubber (still widely available) and you’re left gazing upon a stock 5 Series, which is surely half the M5’s appeal.

Because it sure as hell isn’t the cost of running one. ‘M’ may stand for Motorsport, but it also stands for ‘money’. For some years now, the best cars have been nudging £30,000. You don’t have to pay that, though. Around £13,000 is enough for an honest late car that, with care, should appreciate in value. You can pick them up from as little as £8000, but at that money it’s worth buying privately when you can gauge the quality of the previous owner – and the depths of their pockets.

“The E39 5 Series was a great era and the M5 is the ultimate. It’s fantastically well built. We’ve sold around 50 over the years, but it’s getting much harder to find a decent one with reasonable mileage. If I were offered one now, I’d be all over the suspension and steering, checking for wear. Anything with an M badge on it isn’t cheap, so I’d consider general parts costs, too.”

Plastic chain tensioner is sensitive to the wrong oil. Replace it and the chains if the work hasn’t been done recently.

You need to hear the car start from cold and warm. It’s noisy if it’s failing.

It may need new front suspension and steering parts at about 100,000 miles. Discs wear and warp and are pricey.

Check behind the bumpers, wheel arch liners and the trim on the doors and windows. Inspect the bootlid seam and around the petrol filler area, too.

It drinks about a litre every 1500 miles.

Check for cracks and chips. The integrated sensor for the rain-sensitive wipers means a new one isn’t cheap.

Heavily bolstered seats always suffer wear and the M5’s are no exception. The pixels in the digital dash display can vanish, but it’s repairable. There are two coolant temperature sensors — one in the radiator and another in the engine — and if they don’t agree, they’ll trigger a red warning light. 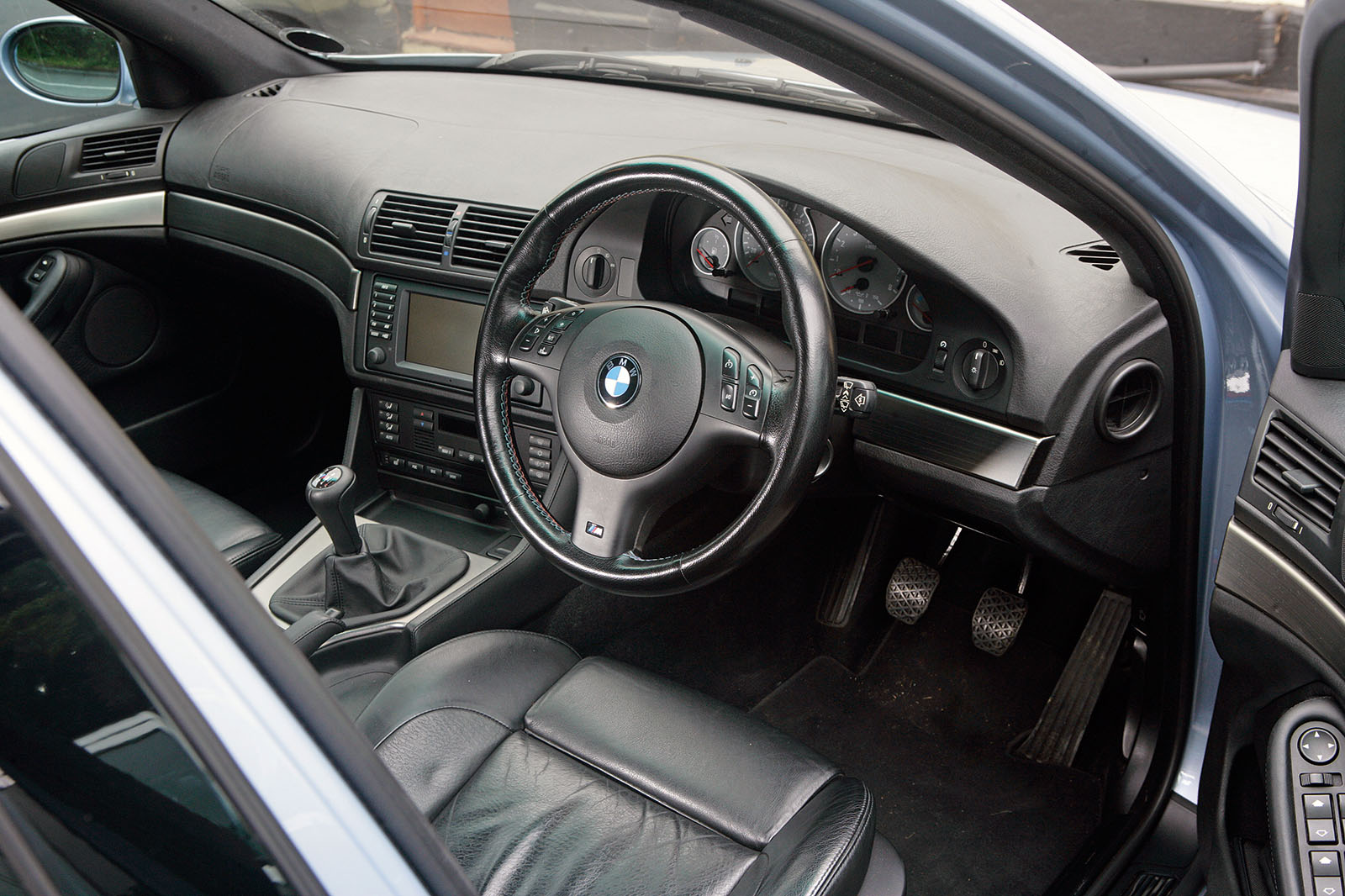 At around 100k miles, an M5 will need new timing chains. They’re linked with the Vanos system and it’s a good idea to have that overhauled, too. “The Vanos is blamed for all sorts of noises when it’s the chains,” says Steven Lewis of specialists Mr Vanos. “Even so, a worn Vanos can lose you 60bhp.”

Mix of early cars with mileages north of 120,000. An independent inspection is essential. Check claims of full service history against invoices detailing who, what and when.

Higher price is no guide, since it’s the same mix of mileagey cars. However, you’ll find some very nice ones here, with fully documented histories.

Last of the E39s with reasonable mileage and solid history. A couple of grand more will put you in a 56-plate V10 E60 M5, still with a BMW extended warranty. It’s not the same, though…

Sadly they can suffer corrosion in the sills and jacking points, just like any other E39 BMW 5 series. Strongly recommend prospective buyers get a car on a ramp and get the rear of the sills inspected - have a prod for rot and walk away from anything you're not prepared to spend big bucks to repair and subsequently live with.
ashtonwalles 19 January 2017

It's the best car ever! Just

It's the best car ever! Just to the point. Though it's a bit expensive to get an independent inspection, but it's worth it. My nephew just made it a trash, as he's constantly using it for his engineering purposes on the plant. When I saw it, I was shocked - it was worn out and dilapidated!
Ashton -
Ektor 16 October 2016

Great, but not the greatest in my book

I love the e39 M5, I had one for a while but, unlike the e34 which was set-up just right for proper "attack mode" (the 3.8 being my all-time favorite M5), this one had already gone a little soft. Soft in the suspension, which got a little too loose at higher speeds, or brakes which simply couldn't handle the extra mass and performance the magnificent V8 could muster. I took care of both with good upgrades, but at a price. Since I had already started, I upgraded to a Hartge exhaust and what a difference that made, that was a proper muscle car soundtrack! :-)
In terms of model years, I would also add that the 2001-and-later models took care of the heavy oil drinking that the early models suffered from, so they're definitely preferable, although rarer as they novelty had worn off. They also had the later sat-navs and improved infotainment.
View all comments (4)