BACK TO ALL NEWS
Currently reading: Used car buying guide: Porsche 911 (964)
UP NEXT
Entry-level SUVs on the way from Volvo and Polestar

The 964-generation Porsche 911 has plenty to offer enthusiasts with budgets from £30,000 to six figures and some way beyond
Open gallery
Close

The Porsche 911’s most ardent critics lament its supposedly unchanged 50-year-old design and once-close relationship to the lowly Volkswagen Beetle, but neither of these now tired condemnations have really been relevant since 1989, when the 964 was launched.

The 911 underwent a dramatic (relatively speaking) design overhaul as it morphed into its new generation. The 964 was boldly claimed to be 85% new compared with the then-25-year-old original 911, gaining integrated bumpers in place of the old extended items, an electric rear spoiler and a plusher interior. More significantly, the 964 did away with the 911’s antiquated torsion beam suspension in favour of a coil-sprung set-up and gained power steering and anti-lock brakes as standard.

It also underwent a heart transplant, with the old car’s 3.2-litre flat six swapped for a 3.6-litre engine that packed 247bhp as standard – plenty for a car that still tipped the scales at less than 1400kg with a manual gearbox.

A controversial new Tiptronic automatic option – available only on the rear-wheel-drive Carrera 2 – added around 100kg to the kerb weight and 0.7sec to the 0-62mph time but retained a good percentage of the manual car’s dynamic charm. It’s worth seeking out if you do a lot of urban driving, and you only have to read a couple of contemporary reviews for reassurance that it’s a lot slicker than you might think. 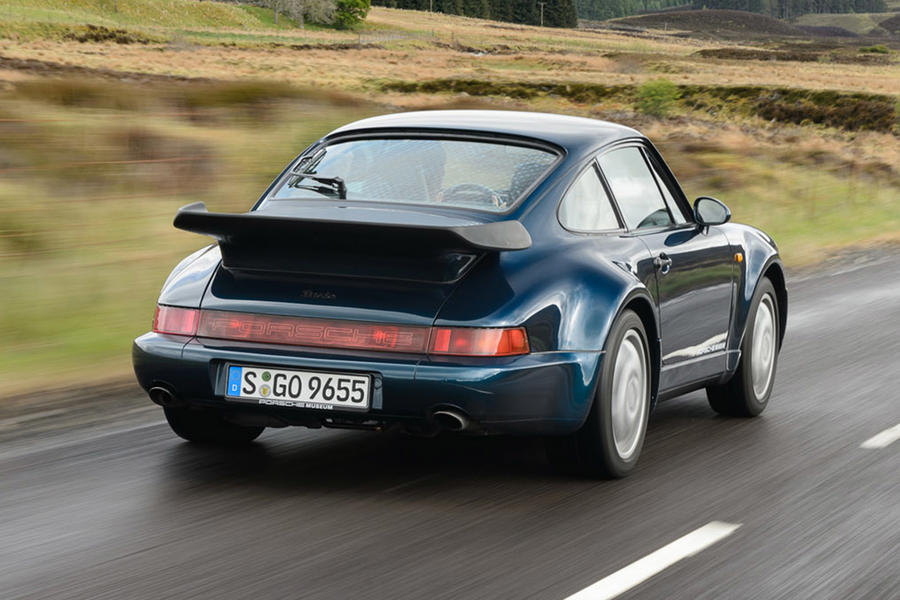 If you want full-bore, tail-out antics, however, only the top-rung Turbo shall suffice. The blown 964 packed an uprated version of the previous generation’s 3.3-litre motor until 1993 and came with up to 376bhp in stripped-out, stiffened-up S guise, and it was one of the most unhinged performance cars of its era. It took the fight to bedroom-poster heroes such as the Ferrari Testarossa, and today’s prices reflect its legendary status. Expect to pay upwards of £110,000 for a pre-1993 example and several times that for the most exclusive versions of the one-year-only 3.6-litre model of 1993.

The most outlandish 911 variant – and the one that’s most likely to be found tucked up in a collector’s heated, hermetically sealed vault– is the Carrera RS, essentially a road-going version of Porsche’s 911 factory racer. Wearing the Turbo’s widened rear end and weighing 155kg less than the standard car, this is peak-1990s 911, and you can expect to pay at least £140,000 for one today.

Prices for the standard Carrera are, thankfully, slightly more accessible, starting in the £35,000 region for automatic, rear-drive Cabriolets and rising to nudge six figures for the cleanest, lowest-mileage four-wheel-drive Carrera 4 coupés. So is that the 911 to go for? Well, the 964 is the penultimate air-cooled 911, offering a much more ‘analogue’ driving experience than its comparatively tech-heavy 993 successor, so if you want authenticity and durability with more than a touch of the old-school thrill factor, look no further. 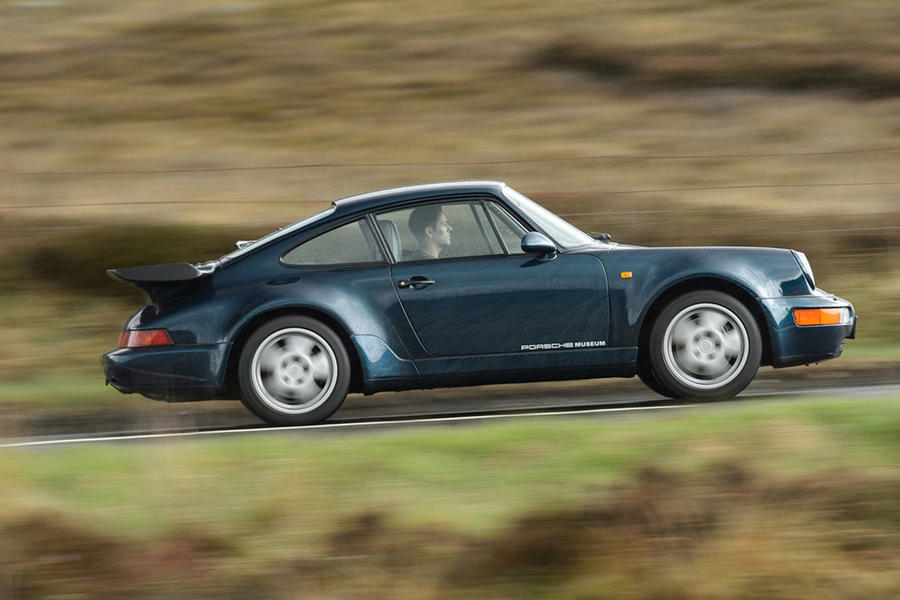 Adrian Crawford, Williams Crawford: “Find out as much as you can over the phone and concentrate on recent history. Sensible investment – more than just regular servicing – is a good sign. Too many of them sit around with very little maintenance, and it’s passed off as ‘full service history’. Look closely at recent major maintenance and ensure the seller knows their car.”

■ Engine: Drips of oil from the rocker cover or timing chain cover can be forgiven, but signs of a steadier flow might need an engine rebuild or at least a top-end reseal. The two distributors are linked by a belt which can snap, causing internal damage. Most cars were fitted with a vent pipe to alleviate the risk, and most cars have this fitted now, but still check the belt. Get a specialist to check the head stud bolts. A snapped one could mean a £10,000 bill.

■ Bodywork: Original cars are where the big money lies, so avoid Carreras made to look like a Turbo or RS. Rust around the bottom corners of the front and rear screens is common, but the 964 is generally less corrosion-prone than earlier 911s. Factory-applied underseal did its job but should be renewed if it’s still original, paying attention to the inner wings. Cabriolets can be troublesome: damp footwells may mean a new hood or seals are needed – not a cheap fix.

■ Suspension and steering: The 964’s well-rounded ride was lauded but will feel firm compared with a modern equivalent. If it’s very harsh, new bushings could be the answer; failing that, budget for new dampers. The front end originally sat high, so many cars have been lowered, which improves handling. The power steering is prone to leaks, usually from the rubber hose between the reservoir and pump – and you might as well replace all the O-rings while the unit is out.

■ Electrics: ABS problems are common on four-wheel-drive cars. But before spending nearly £1000 on a new control module, check that the accelerometer units in the transmission tunnel are connected and clean and that the wiring is all intact. Most cars also have climate control system issues. Control units are pricey, so run through the temperature range on a test drive and check that it stays where you put it.

The 964 isn’t yet so collectable that you can’t find used parts in breakers’ yards, and that could save a fortune in the event of a prang or breakage. Examine body panels as you would on a whole car and factor in respray costs. If you can’t get a guarantee that an electrical component or moving part is fully functional, don’t take the risk.

£90,000 and above: Turbos, 3.8-litre RS editions and ultra-rare Speedsters. Prices climb all the way to £1.4 million for the lighter, limited-edition Turbo S Leichtbau. 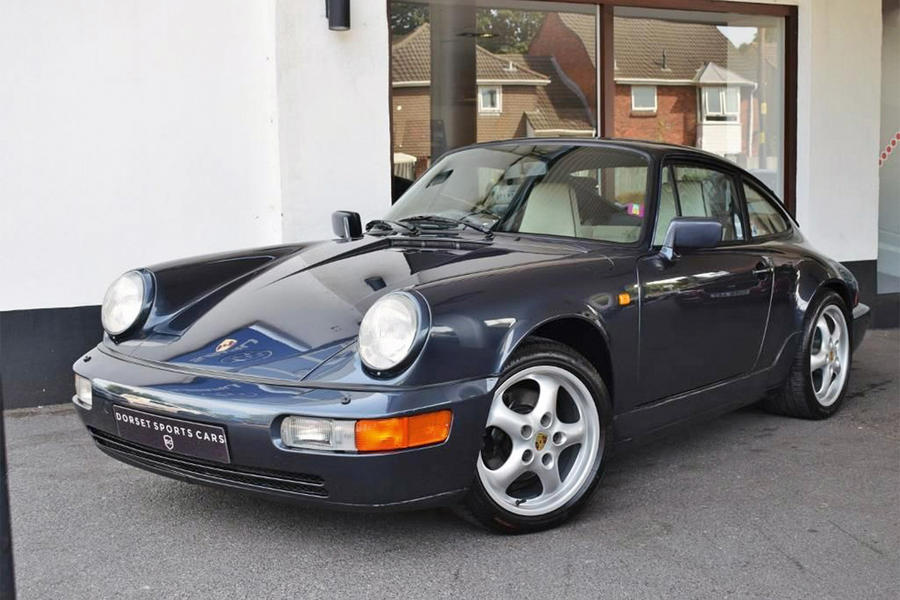 Porsche 911 Carrera 2, 1990, 129k miles, £58,990: One of the earliest and highest-mileage 964s on the market, which will no doubt scare off the less committed enthusiasts, but it’s undergoing a thorough recommissioning presently.

I guess that's why Singer use the 964 as the basis for their amazing cars.

I guess that's why Singer use the 964 as the basis for their amazing cars.