BACK TO ALL NEWS
Currently reading: High-riding Porsche 911 prototype hints at rally-inspired variant
UP NEXT
New 2026 Polestar 6 confirmed as 874bhp evolution of O2 concept

An unusual high-riding Porsche 911 prototype has been seen testing on the road, reigniting suggestions that a rally-inspired ‘Safari’ model is in the works.

The prototype, which in all other respects appears to be a standard 992-generation model, features a clearly raised ride height with the arch gap filled by styrofoam cladding.

Such cladding has sometimes been used to help test and develop suspension set-ups, and to hide new developments such as air suspension.

However, it could be there to try to hide the extra space in the wheel arch. It could, therefore, be an early mule for a long-mooted project to introduce a crossover-style ‘Safari’ model as a limited-run special. 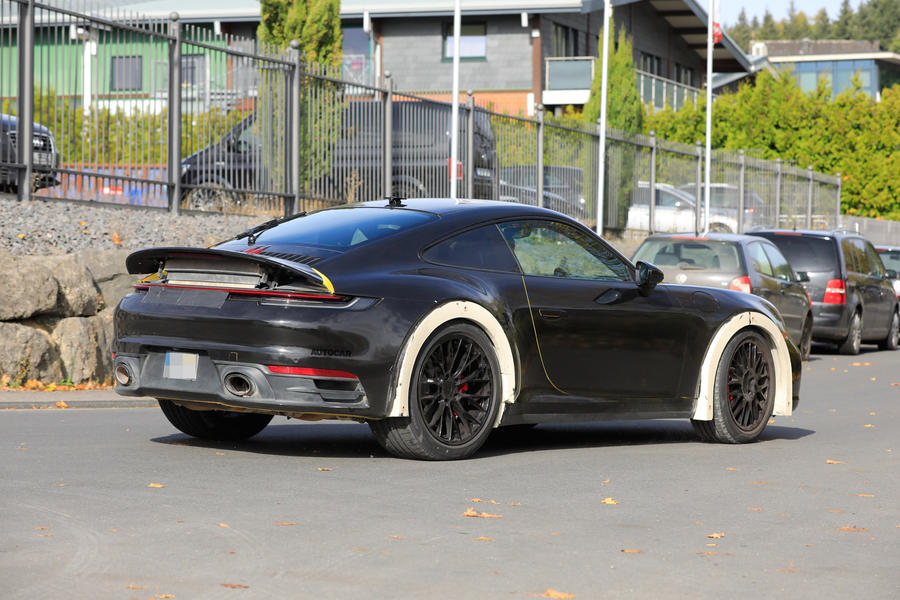 Porsche is refusing to comment on the latest spy shots. However, in 2018, Porsche sales boss Detlev von Platen hinted at such a model when speaking to our sister title Autocar India.

“Taking the 911 and making an SUV out of it? Taking it higher? That could be a good idea, and of course it [a raised-up 911] won’t be a model range but it will be a limited, very niche product,” he said. Porsche has consistently indicated a desire to expand derivates of the 911 and do more special variants, too.

The Stuttgart brand has a history with raised-up versions of its sports cars, albeit one based in motorsport. The company used jacked-up 911s in the late 1970s and early 1980s in rally special stages, and was the only team in the 1978 East African Safari Classic Rally to get both of its cars across the finish line. Although never a production model, the ‘Safari’ name became a pseudonym for aftermarket rally 911 builds.

when I hear Safari mentioned in the car world, I automatically link it with Landrover not Porsche.. It was a model with windows in the roof..

Interesting, when I hear

Not sure about you lot, but a 959 Rally spec was always my favourite.  With the appalling state of our B Roads this could literally be a Group B (Road) Rally spec and cope with the potholes, speed bumps, off camber subsiding roads with ease.  I'll take one.

Not sure about you lot, but a 959 Rally spec was always my favourite.  With the appalling state of our B Roads this could literally be a Group B (Road) Rally spec and cope with the potholes, speed bumps, off camber subsiding roads with ease.  I'll take one.

961 Lemans was a machine and half too!

I reckon you might be right.
Porsche have more variants for one model than most. Hope they don't try to become all car to all men. Don't mess with one of the most iconic cars of all time please chaps.
View all comments (7)