Here’s one for you: what do you buy when you want a genuine supercar for everyday use but are hamstrung by a five-strong family and a sub-£10,000 budget?

It’s not the impossible conundrum it might seem. After all, everybody knows that when it comes to power for money, used examples of the Audi RS6 – what with today’s gasp-inducing depreciation rates – are among the biggest bargains on the market.

Today, we’re concerned with the car that started it all, the C5-generation RS6, which changed the world of fast family cars for good. Packing 444bhp and 413lb ft from a twin-turbocharged version of the less potent – but still Ferrari-baiting – 4.2-litre V8 found in the S6, it will shoot across 0-62mph in less than five seconds and top out at an electronically limited 155mph (although that’s perhaps a somewhat conservative figure).

It was only the third car in Audi’s now-revered RS sports car family – the first two being the Porsche-engineered RS2 and smaller RS4 – and was produced for just two years, from 2002 to 2004, bowing out to make way for its V10-powered C6-generation successor.

Happily, though, it’s not as rare as its limited production run and original £60,000 starting price would have you believe – and there’s a good variety of cars to choose from, albeit mostly estates, which outsold the saloon by quite some margin. 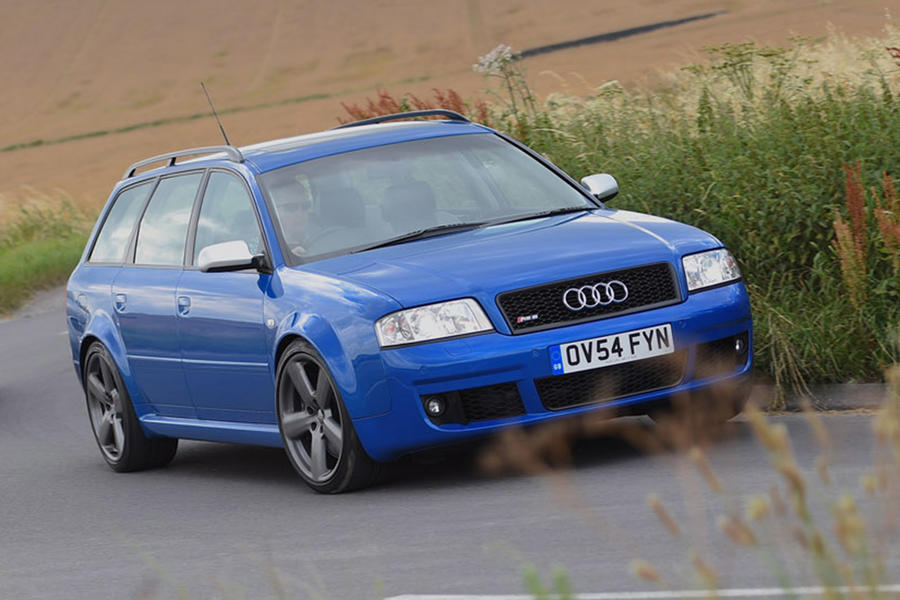 It will come as no surprise to hear that the RS6 is not a cheap car to run. It’s easy to be taken in by the concept of buying a genuine performance icon for £10,000, but remember: this is an Audi, so it has Audi problems and Audi-flavoured repair bills. Got a gearbox issue? You’re looking at £3500 for a replacement unit. And if that doesn’t put you off, how does £1250 sound for a second-hand front bumper that needs painting?

Then there’s the suspension. The C5 RS6 was the first model to feature Audi’s Dynamic Ride Control (DRC) system, which uses a pump to adjust the pressure of each individual shock absorber under acceleration, braking and cornering to improve handling without affecting the ride quality. It was groundbreaking when it made its debut but it hasn’t stood the test of time and you’ll find that most owners have swapped it for a more conventional strut set-up to avoid future headaches.

The gearbox is another story. Torque-converter failures plague the otherwise promising reputation of the C5’s powertrain and can cost you big money. A full rebuild will set you back around £3000, or you can have a new unit for £5000 plus shipping from the US.

All of which is to say: walk away from any car that doesn’t have a full service history, preferably from a combination of main dealer and Audi specialists, be aware of the C5’s most expensive potential pitfalls from the outset and set aside a hefty rainy-day fund for future repairs. 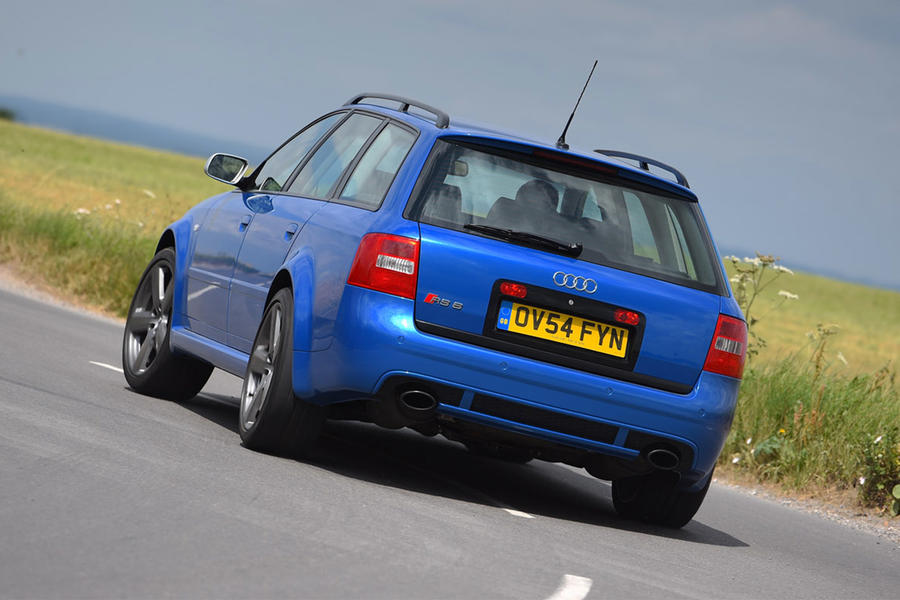 Adam Broadway: “It’s not a cheap car to run. Don’t think of it as an Audi: think of it as a supercar, because that’s what it is – and because of that, everything costs a lot of money! Look for one that’s just had the gearbox done over one with low mileage that hasn’t. They eat tyres and brakes – discs are £500 each – and if you do buy one, take it straight to a specialist to get it checked over. Get ready for a bill as there will always be something wrong.”

■ Engine: If you can stomach its sub-20mpg fuel economy, the V8 is a rather amiable beast to live with. The timing belt should be changed every 35,000 miles and the cambelt at 40,000, and it makes sense to replace the cam chain tensioner, O2 sensor, voltage regulator, camshaft positioning sensor and starter assembly while the front clip is off. Check previous owners have been judicious in this regard. Intercoolers can leak, leading to turbo failure. 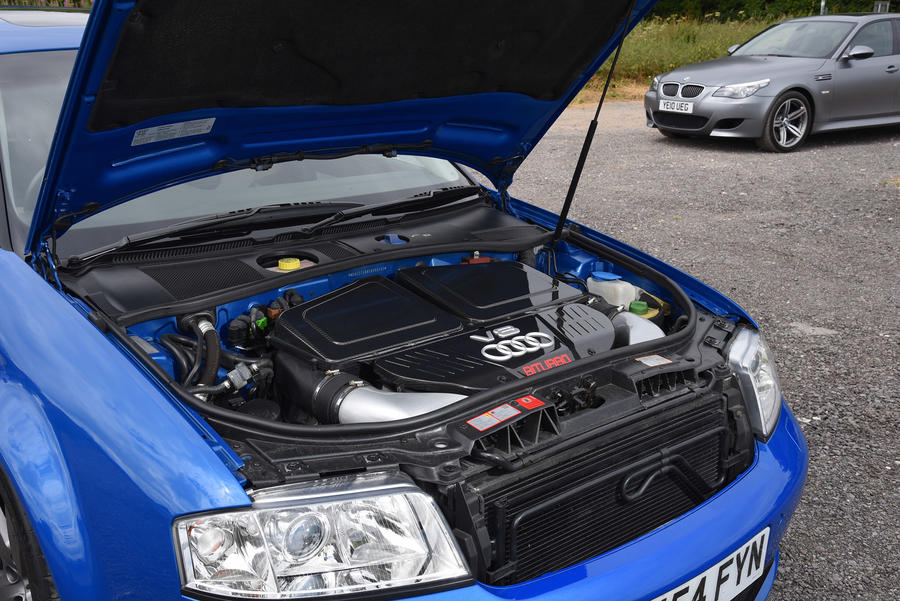 ■ Suspension: It’s a question of when, not if, the Dynamic Ride Control system will start leaking. A popular fix is to replace the struts with conventional coilovers from brands like Koni, Bilstein and KW, so check the quality of any aftermarket components used. If the original system is still in place, keep an eye out for fluid around the top of the shocks.

■ Gearbox: The torque converter is prone to complete failure at high mileages (expensive). Symptoms include clunky shifts, erratic revving and disengaging under acceleration. Some owners have had success with a simple fluid change.

■ Interior: Most switches, buttons and trim elements are taken from the standard A6, so they’re durable and easy to replace. Instrument cluster loses pixels over time, but replacement LCD panels and second-hand units are easy to source. It’s a good idea to check the stereo, seats, climate control and windows all work as expected. 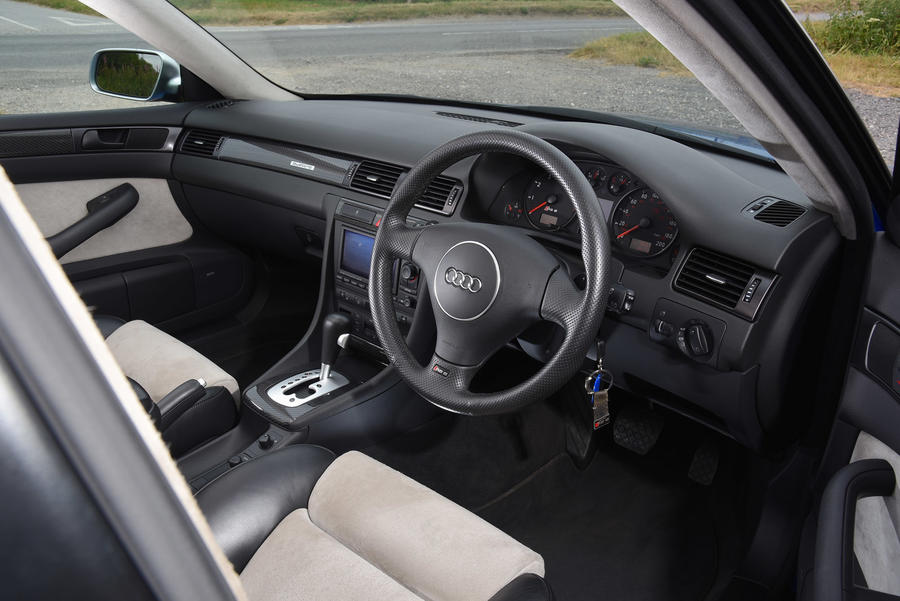 ■ Body: Water gets into the cabin when the bulkhead drain hole is blocked or the pollen filter seal is perished, so check for wet carpets. Scour the entire car for signs of accident damage, poor paint jobs and surface rust.

■ Electrics: A more serious consequence of blocked drain holes is corrosion to the main fuses, which are hidden behind the coolant expansion tank.

If 444bhp isn’t quite enough for you and your family, you could try to track down an elusive RS6 Plus edition. Launched in 2004 as a low-volume run-out special, the Plus had an extra 29bhp, lower suspension and cross-drilled brakes. Just 999 were built. Expect to pay upwards of £25,000.

£20,000 and above: Immaculately presented with low miles. 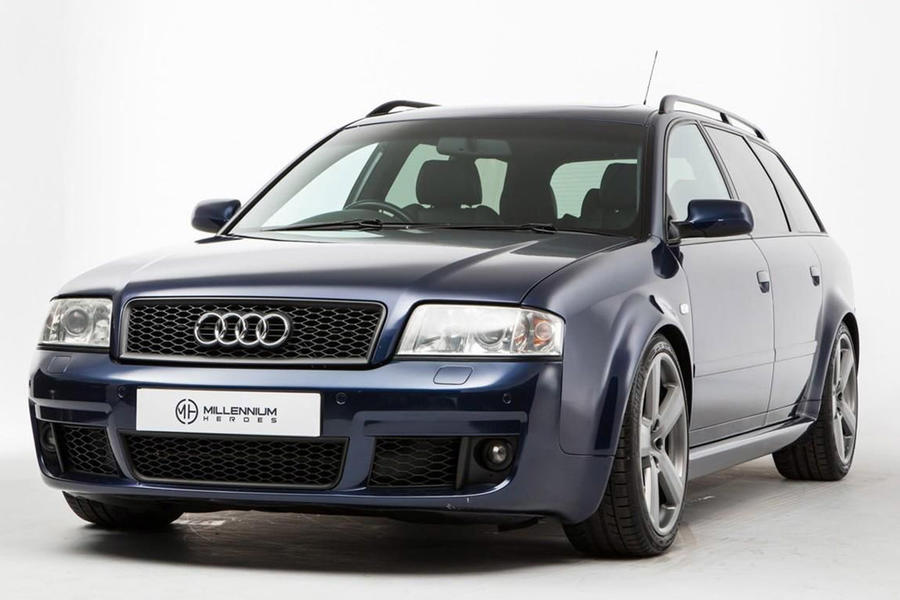 Audi RS6 Avant, 2003/03, 81K miles, £15,995: Finished in Mugello Blue and with a host of subtle aftermarket upgrades to boost performance, this car looks to be worth every penny. The front seats are slightly worn and the DRC system has been swapped for coils but nothing suggests any horrors lurking within.

Plenty of confusion in this article. Cam belts,timing belts and cam chain tensioners are all mentioned. Unfortunately no accuracy. I would not trust the comments in the article given the level of attention to detail exhibited.

P38 Range Rover-owning levels of insanity needed to run one of these. Keeps the aftermarket repair and maintenance industry going, I suppose.

A frightening experience of ownership. Sooo many not so performance oriented motors that slip into the part shade of the RS will do very nicely instead. i.e. 2010 BMW 535d Estate
5.7 0-60 and FSH for 10K!
View all comments (7)