The Alfa 156 is a second-hand starlet with a terrible reputation for reliability. We tread through the minefield of potential ownership
Open gallery
Close

The beautiful Alfa 156 was 21 this year. Around 6000 remain – a remarkably high number given the model has endured both the scrappage massacre of 2009 and, since 2015, the demonisation of old diesels. A third assailant is, of course, corrosion; a more subtle enemy that sees rust sneak up undetected until, one day, you get in the car and your foot plunges through the floorpan.

The model was hugely popular with Alfistis but the German-buying crowd were never won over. Alfa’s reputation for unreliability hung over the 156 like a cloud. Save for a few bright spots (one owner gleefully reported 12,000 trouble-free miles in his Selespeed car), it was deserved.

Time and again, reliability surveys ranked the model in the basement. Warranty companies bemoaned its high repair costs. After a couple of years picking up the tab for prematurely broken cambelts and tensioners on Twin Spark engines, Alfa cut the components’ replacement interval by half, to 36,000 miles. It did the same with diesels. Recalls? Best not go there. 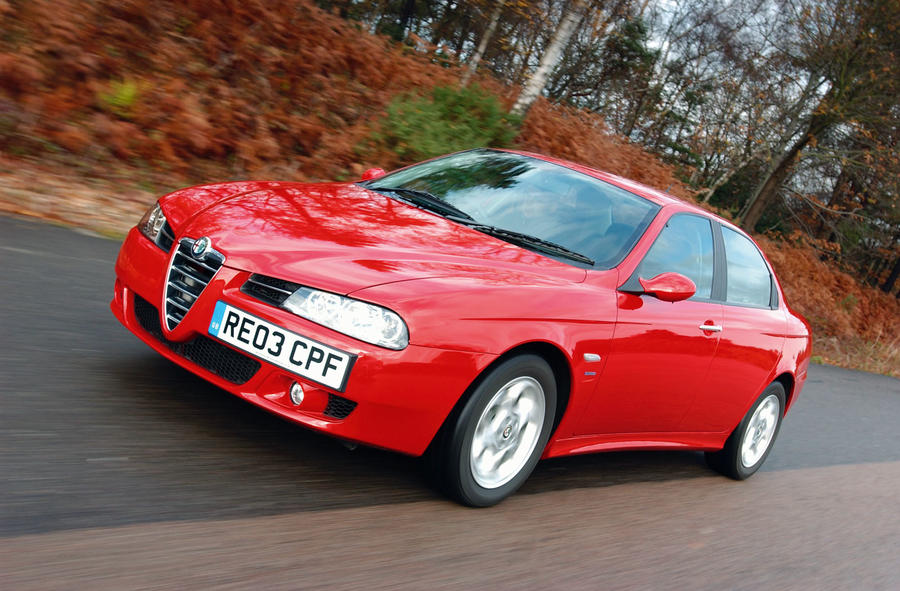 So make that a fourth assault on the 156. The good news is that the examples that have survived their reliability issues are likely to be fairly sound. In any case, if trouble should recur, well, with prices starting at just £500 for a dodgy 2.4 JTD and from around £1200 for tidier cars, you won’t have lost your shirt. 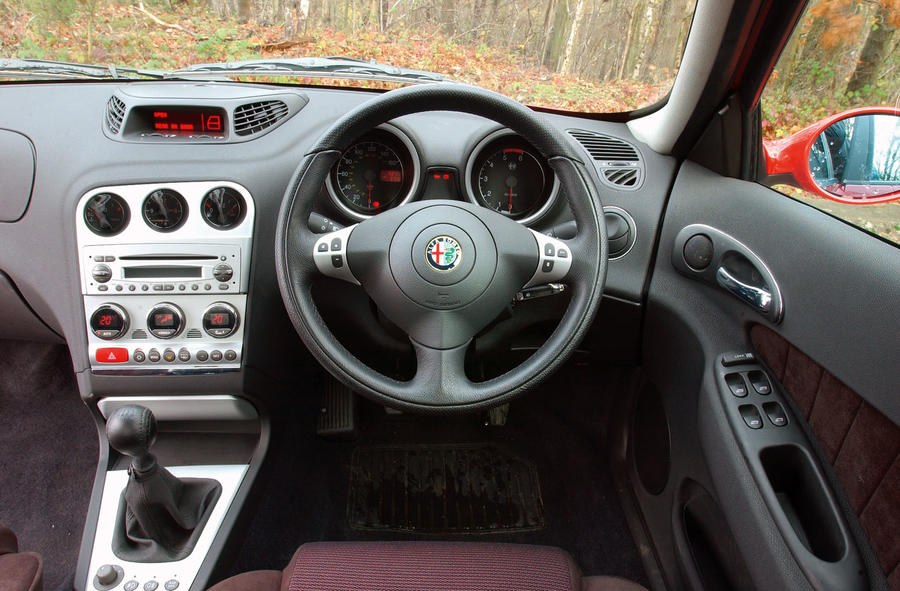 Optional Selespeed automatic versions of the 2.0 TS had change buttons on the steering wheel, which was cool. The 2.5 V6 was available with a four-speed auto called Q-System, which featured a traditional auto function plus an H-pattern manual change. Three so-called Sport packs brought extra kit, but Sport 1, with its lower-profile tyres and sports suspension, was the most cost-effective.

The arrival of the 1.6 TS in 2000 triggered a range-wide price cut. A facelift two years later introduced a mix of desirable standard and optional features including a Bose sound system and xenon headlights, while the Selespeed buttons were replaced by paddles. More importantly, though, the impressive 2.0 TS was replaced by the new (and less impressive) 2.0 JTS engine with direct injection, the 2.4 JTD got a touch more power and the mighty 3.2 V6 GTA landed. With 247bhp on tap, this version should have shaken the trees but it was a flawed diamond and today is one of the few used cars that’s worth a premium when expertly modified and sharpened up. 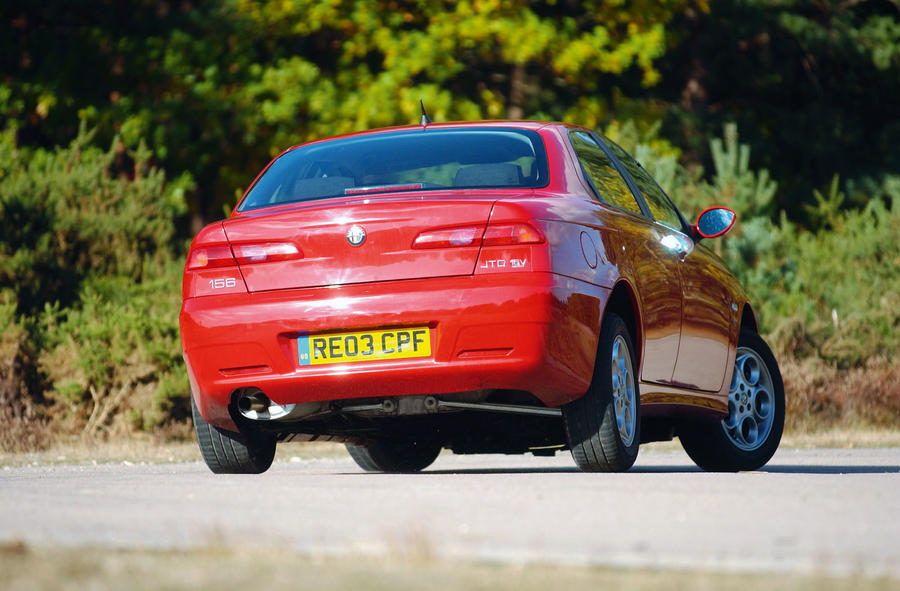 Jamie Porter, Alfa Workshop: “The 156 was a superb car and people forget it was pretty advanced. The 2.0 JTS engine had direct injection while the 2.4 JTD was the first common-rail passenger car diesel engine. My favourites are the 2.0-litre Twin Spark, 1.9 TD and 3.2 GTA. The rest you can forget. The 2.0 JTS was unreliable and suffered emissions problems, the 2.4 JTD was too heavy and not very economical, and the 1.6 and 1.8 TSs didn’t really catch on. The 2.5 V6 wasn’t very fast but it was thirsty, and the car itself was too soft. Today, rust is the biggest issue. The platform fares worst so always get a prospective buy on a ramp and poke about under it.”

■ Engines: On petrols, the cambelt and water pump should be changed at 36,000 miles. On the GTA, a rubbing sound may be the cambelt fouling the cam covers. A lack of power or poor idling is likely to be the air flow meter, which lasts around 70,000 miles. On diesels, cambelts should be changed at 60k miles. A seized water pump bearing will take out the cambelt, wrecking the engine. A sticking EGR valve can be an issue on 1.9 TDs. Check for oil smoke. Check the JTD’s sump isn’t cracked.

■ Transmission: Feel for worn synchros and listen for worn bearings in the gearbox end case. A high biting point on the pedal plus a heavy action mean a worn clutch. On diesels, a clunk as you let out the clutch is likely to be the dual-mass flywheel.

■ Suspension: A creak coming from behind the dashboard may be worn upper wishbone ends. Check the rear suspension rear arm bushes and rear radius arm bushes for wear. Uneven tyre wear (toeing out is common) is likely to be a geometry issue or wear in the upper top wishbones. 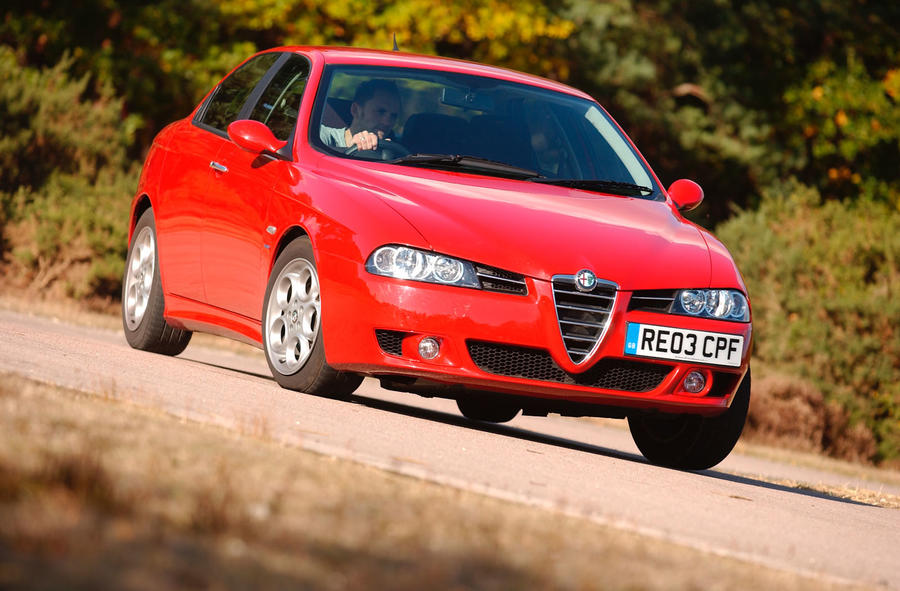 ■ Interior: On starting, check that the three warning lights – engine, ABS and airbag – go out. If the rear windows don’t operate, suspect lack of use.

Suspension squeaks bedevil the 156. Perished bushes are often to blame. Replacing them with polyurethane items such as those sold by Powerflex will not only cure the problem but also tighten up the handling. Make sure they’re fitted properly and then lubricate the area at intervals to keep corrosion at bay. 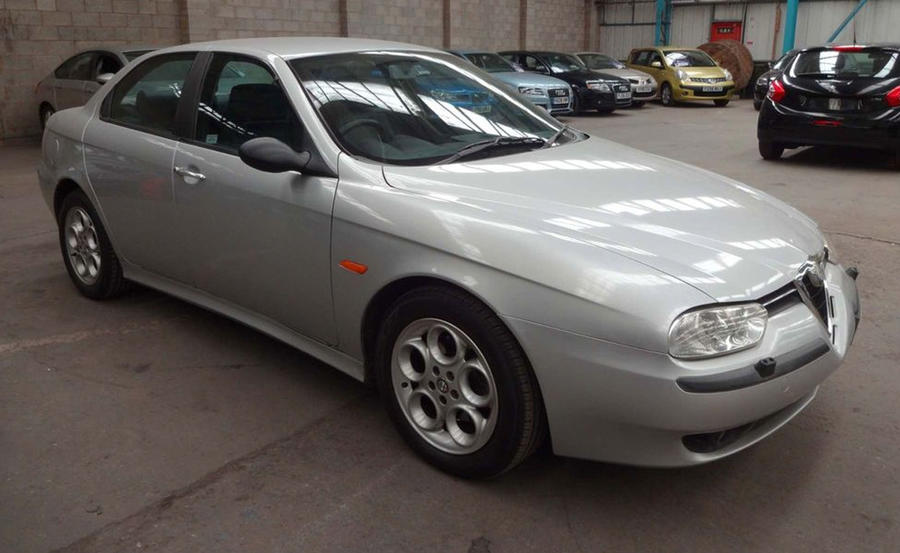 Autocar still peddling the age old 70s stories of rust and Alfas...Zzzzz....  Its amazing no one every mentions rusty German and Jap cars - yes, they exist in thousands -keep wearing the rose tinted spectacles boys ;-)

I owned a 2000 W reg 156 2.0 TS from new and did 155,000 miles in 13 years it was not only a superb car but was the best thing I've ever bought.
It never broke down had wonderful free revving great sounding engine. Looked great inside and out. I've considered buying a Guilia but I don't like the styling or interior - nowhere near as good as the 156 but I'm sure they're better to drive - what a shame - I was hoping the GTV would fix those problems but I understand it's been canned
Sparkedout 31 December 2019

I owned a 2000 W reg 156 2.0 TS from new and did 155,000 miles in 13 years it was not only a superb car but was the best thing I've ever bought.
It never broke down had wonderful free revving great sounding engine. Looked great inside and out. I've considered buying a Guilia but I don't like the styling or interior - nowhere near as good as the 156 but I'm sure they're better to drive - what a shame - I was hoping the GTV would fix those problems but I understand it's been canned
View all comments (7)