BACK TO ALL NEWS
Currently reading: Alfa Romeo scraps plans for new GTV and 8C models
UP NEXT
BMW opens door to M1-inspired electric supercar

Alfa Romeo’s future product plans have been slashed, according to the brand’s third-quarter earnings report – with the proposed new GTV and 8C sports cars axed.

FCA boss Mike Manley told investors during a conference call that Alfa’s portfolio plan has been “significantly scaled back, with a corresponding reduction in capital spending”.

The plan was quietly released in a financial results presentation to investors yesterday (Thursday) and discussed during an earnings call today. It appears to show that the Italian brand’s range has been ‘rationalised’ down to four future models: replacements for the Alfa Romeo Giulia and Alfa Romeo Stelvio, the Tonale and a new smaller  'B-SUV', which has yet to be detailed. 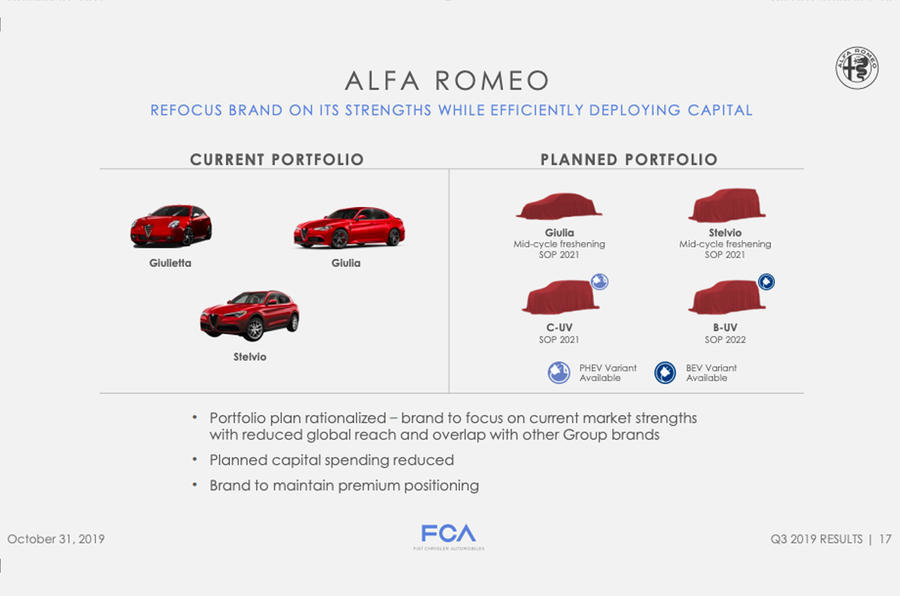 This means the new GTV coupé and 8C replacement, announced in a five-year plan in June 2018, have been shelved or pushed back, alongside a rumoured BMW 5 Series saloon rival to sit above the Giulia. It's not yet clear if these models have been delayed or shelved entirely, but all signs point to the latter for the time being.

Last year's five-year plan was drawn up under the leadership of former FCA boss Sergio Marchionne, who passed away last year. Since taking the reins, Manley has changed tack, responding to significant losses posted by Alfa and FCA's wider European arm.

It's likely that the decision to cut spending on Alfa Romeo's future line-up is influenced by the recently announced merger between FCA and the PSA Group, which was confirmed shortly before the financial results were released. The merger creates the fourth-largest car-making group in the world, but PSA CEO Carlos Tavares – who is set to be named CEO of the new merged group – is famed for bringing in wide-ranging cost-cutting measures to increase efficiency and profits.

The two cars that could transform Fiat and Alfa Romeo

Lets Hope Hope that Carlos Tavares doesnt turn Alfa Romeo into the awful Badge Engineered maker like Seat. We must remember Seat was and as always been a Badge Engineered Manufacturer though, unlike Historically thoroughbred Alfa Romeo. Mismanaged yes many times by Fiat but deserving much more than PSA Management. I have a Soft Spot for Citroen but PSA ! I prefer an Italian at the helm like Sergio Marchione a man with pragmatic Vision so much Bigger than PSA. Volume doesnt always mean nice products look at Kia !
underdog 1 April 2020

Stupidest decision of the decade and its only 2020

The failure of Alfa to put appropriate halo models in its line up will guarantee the slow demise of a brand that is fundamentally more important than Ferrari to the car industry, but hey what do consumers know.

So now we will see French

So now we will see French influenced alfas like we will soon see French, probably rebadged meganes as astras. What a dire thought. But at least there will be no vw looking things. That would be heartbreaking.
giulivo 2 November 2019

The rebadged Meganes would be Mercedes. The Megane is Renault.