1500 e-Golfs available to hire on demand from today in Berlin, with e-Up to be added early next year
Share
Open gallery
Close
Share story

Volkswagen has introduced a new app-based car sharing service that will use a fleet of exclusively electric vehicles.

WeShare initially launches in Berlin with 1500 VW e-Golf models, which can be rented by the minute using a smartphone. The fleet will expand with 500 e-up! cars early next year, and the brand’s upcoming electric ID 3 hatchback will join the scheme later in 2020, once the first customers car deliveries have begun.

The launch joins similar services from other manufacturers, including BMW and Daimler, that focus on the emerging trend of urban mobility.

Customers will download an app and use their smartphone to unlock and start a WeShare car, with payments made digitally. Users must have a German address, be over 21 years old, and have held a driving license for at least a year.

An introductory price of 19c per minute will be in place until September, when hire rates will increase to around 29c per minute.

The service won’t use fixed rental stations, instead relying on Berlin’s existing electric infrastructure. The city currently has more than 800 charging points that are powered by renewable resources. VW has also partnered with German supermarket chains Kaufland and Lidl to install 140 rapid charging points at 70 stores across Berlin, with exclusive charging rights for WeShare cars overnight while the stores are closed.

“Supermarkets are the filling stations of the future,” Christian Senger, VW’s head of Digital Cars & Services, said. “Charging while you shop is the ideal solution, for private consumers and for us.” 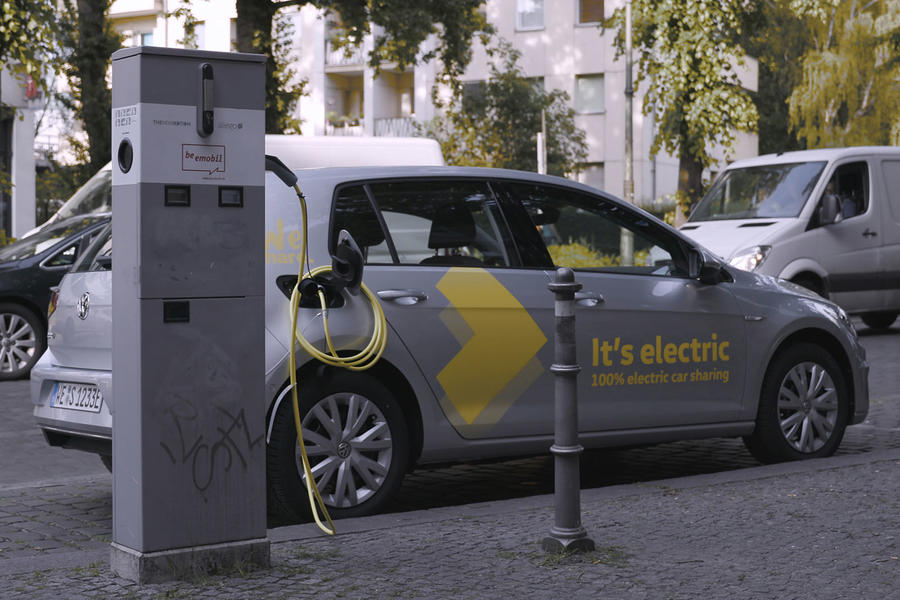 Initially, Volkswagen will use a service team to ensure cars are charged. Later, users will be incentivised to charge the cars themselves.

WeShare has been in testing for three months already using a smaller fleet of 400 cars and around 2500 customers, to a largely positive response. The service will be integrated into VW’s ‘Volkswagen We’ digital ecosystem, which also includes We Park digital parking payments and We Deliver, a service that allows delivery drivers to unlock your car’s boot to leave parcels inside.

Volkswagen is aiming to expand the scheme to other European cities next year, including Prague, in partnership with Skoda, and Hamburg. The company is open to adding micromobility options to the scheme, such as e-scooters and electric bicycles, although a decision has yet to be made.

By 2023, Volkswagen expects to have invested €9 billion in EV technology, and is aiming to sell a million electric cars per year by 2025.

So nice to here that voleswagen introduced a new app based car service with electric vehicles. Thanks for the article and you can try out some appvalley app download to make app search fully with volkswagen cars.

This is an amazing idea. I have seen this for bike services and now available for cars. I hope this will go to great heights

Is someone who wants the

Is someone who wants the convenience of a car sharing service really want to faff about charging it up, even if its incentivised? And I must admit, having the facility for my car to become a drop off point for parcels has never entered my head.....