BACK TO ALL NEWS
Currently reading: New research shows public perceptions of autonomous cars still have long way to go
UP NEXT
BMW opens door to M1-inspired electric supercar

The public isn’t yet ready to put its trust in autonomous vehicle technology, according to the findings of a three-year research project.

The £5 million, part-government-funded Venturer trials used an adapted Bowler Wildcat to demonstrate vehicle autonomy to hundreds of participants to analyse the social implications and public perceptions of the technology.

Over three years and three separate trials, the results have consistently shown that only half of people with a driving licence are currently willing to use an autonomous car.

“We’re not yet at a situation where everyone is convinced,” Professor Graham Parkhurst, research lead and director of the Centre for Transport & Society at the University of the West of England, explained. “Once CAVs [connected autonomous vehicles] have got to the point where they are demonstrably safer, there might be more pressure to adopt them.”

Trust in autonomous technology dramatically increased when trial participants actually got to sit inside Venturer’s Bowler Wildcat while it operated in autonomous mode or in a simulator based on a Range Rover Evoque.

Being able to tell which cars are autonomous will go a long way to help build trust. Electric vehicles will have to emit a warning noise at low speeds from July 2019 and Parkhurst suggests that a different, distinctive noise would help make pedestrians aware. However, in the end, “it’s up to manufacturers to find the best solution”. 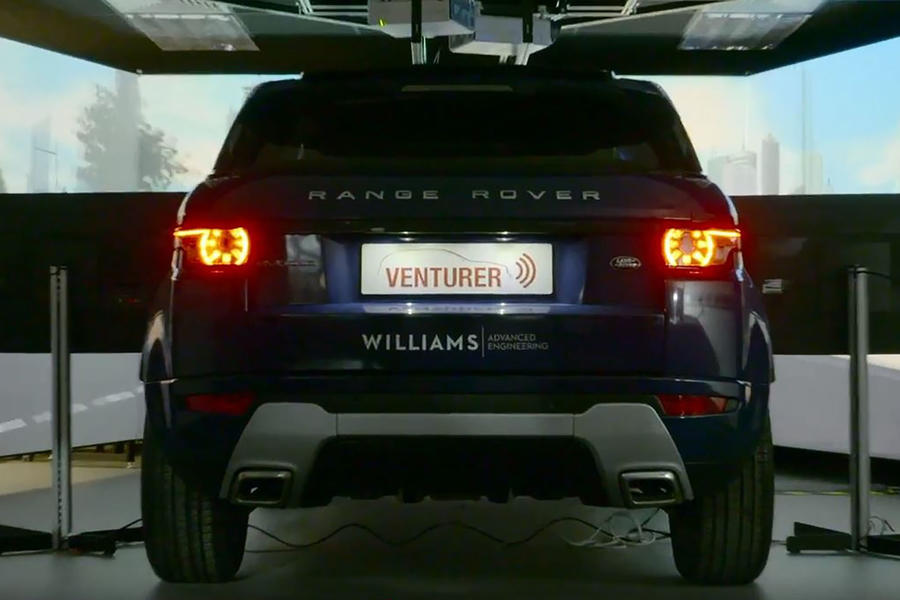 Companies such as Byton have already revealed concept cars that make sensors such as LIDAR a design feature rather than hiding them behind body panels, suggesting Venturer’s research is echoing the thoughts of the industry.

Rather than the risk involved in a particular manoeuvre, it was the movement and noise of the car that made the most difference to how much trust participants had in the technology.

Negative media coverage didn’t appear to influence Venturer’s findings, with none of the participants pulling out of the trial following recent high-profile autonomous car crashes in the US. Age doesn’t seem to be a factor, either; older drivers will apparently be just as comfortable using autonomous cars as younger, more tech-savvy ones.

Other findings include the need for a standard machine-human handover procedure across all vehicles. On average, it takes roughly three seconds for a driver to regain manual control, with reaction times and speeds significantly slower for the next minute.

It’s this reduction in awareness that could lead to autonomous cars running at slower speeds, rather than always matching the speed limit of a particular road.

“Once in ‘passenger’ mode, you’re not taking notice of what speed you’re doing,” Professor Tony Pipe from the Bristol Robotics Laboratory explained. “You just get there when you get there, and you assume the system is getting you there as quickly as it can.”

In theory, reducing speed could be done without reducing throughput, much in the same way that a smart motorway is designed to reduce congestion. 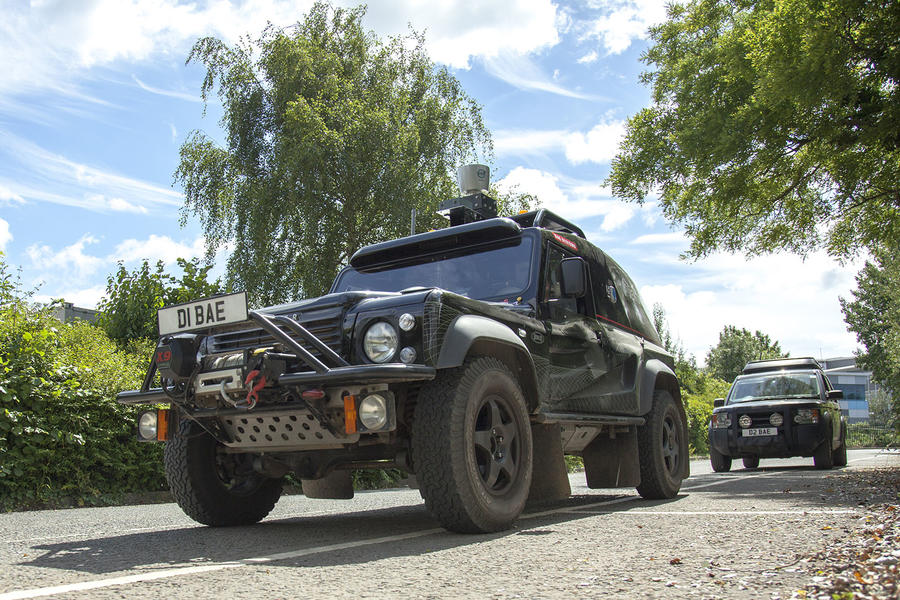 Opinions on driverless taxis and autonomous ride-sharing options were equally mixed for the thousands of people questioned for Venturer’s online study, but the concept of a fully autonomous bus proved more appealing. Would-be passengers were prepared to pay roughly 50p per mile — roughly what a bus journey costs today. That suggests a healthy future for the bus — but perhaps not for bus drivers.

The three-year project is now nearing its conclusion, but the partners involved have formed the Venturer Alliance to ensure the research, and its impact on legislation, continues.

Parkhurst admits “we’re still many years from self-driven cars replacing human drivers” and that much more study is needed before a transition to autonomy. But he does have some ideas of what an autonomous future might look like.

“I don’t seriously believe we’ll have entirely separate roads, but separate autonomous lanes are possible. It could be done in the same lane as proposed truck platooning, or the ones fitted with inductive charging for electric cars once they arrive,” Parkhurst suggested.

With a computer relegated to the most monotonous aspects of driving, such as stop-start city traffic and long motorway journeys, drivers would be free to have manual control on more engaging stretches of road out in the country.

He said: "Look at horse riding; the horse used to be our main mode of transport, but now we ride them for leisure and sport. And with the growth of virtual reality, the question will soon be to what extent do we need to do these things for real any more?”

Riding in an autonomous Wildcat

You might think an exceptionally rugged 4x4 built to survive the gruelling Dakar rally would be overkill as the starting point for testing autonomous driving systems. Especially if your trials never exceed 20 miles per hour.

Yet, for Venturer, the rally raid-spec Bowler Wildcat was the obvious choice.

A Wildcat was the original donor car for BAE Systems’ first autonomous trials more than a decade ago — trials that were restricted to testing on dirt tracks and off-road proving grounds, not smoothly paved roads. When you need to drive at highway speeds on rough terrain, only a machine like the Bowler would do.

With a bullbar up front and roof rails on top, the Wildcat provides ample space to mount the multiple cameras, sensors, radar and LIDAR equipment necessary for automation, too.

By using this proven hardware, supplied by BAE and autonomous electronics specialists Fusion Processing, the research team were able to start trials in months rather than years. Even if the simple loop set-up for this latest test isn’t exactly pushing the Wildcat to its limits. 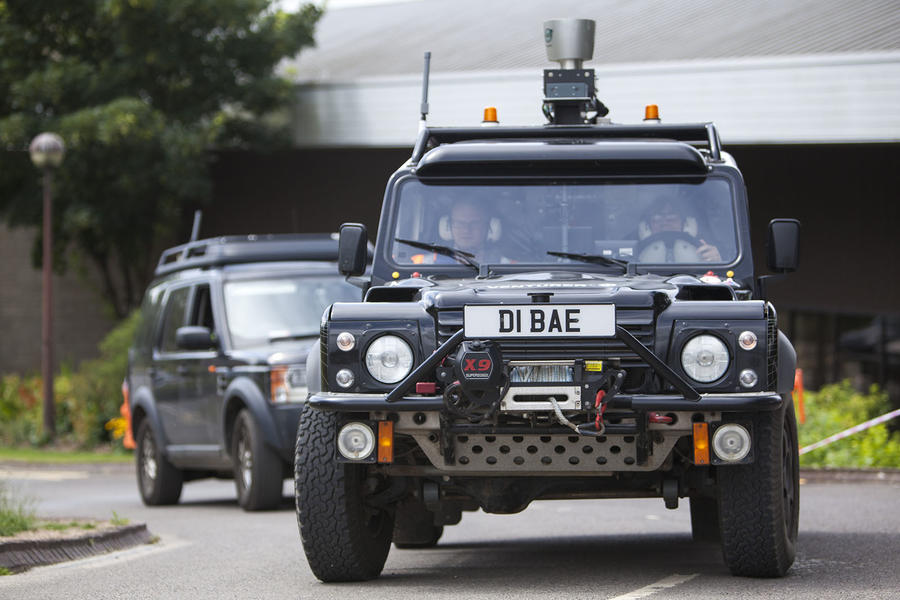 A passenger ride that doesn’t include a spine-shattering off-road experience might not be doing the car justice, but with several million lines of computer code in charge of our route, it wasn’t as if I had a say in the matter.

Clambering into the cabin involves stepping over the factory-fitted roll cage, which is integrated into the car’s tubular space frame construction. The racing buckets and four-point harnesses are an exact match for the rally version, too. So far, so Dakar. It’s a left-hooker, too — despite Venturer being based out of the Bristol Robotics Laboratory.

It’s spare inside, of course: the Wildcat, and the Land Rover Defender from which it utilises many parts was never about luxury. Riveted metal covers each panel, not soft-touch plastic. This particular Wildcat feels even more industrial on account of the screens, switches and control panels the Venturer team has installed to engage the autonomous modes. 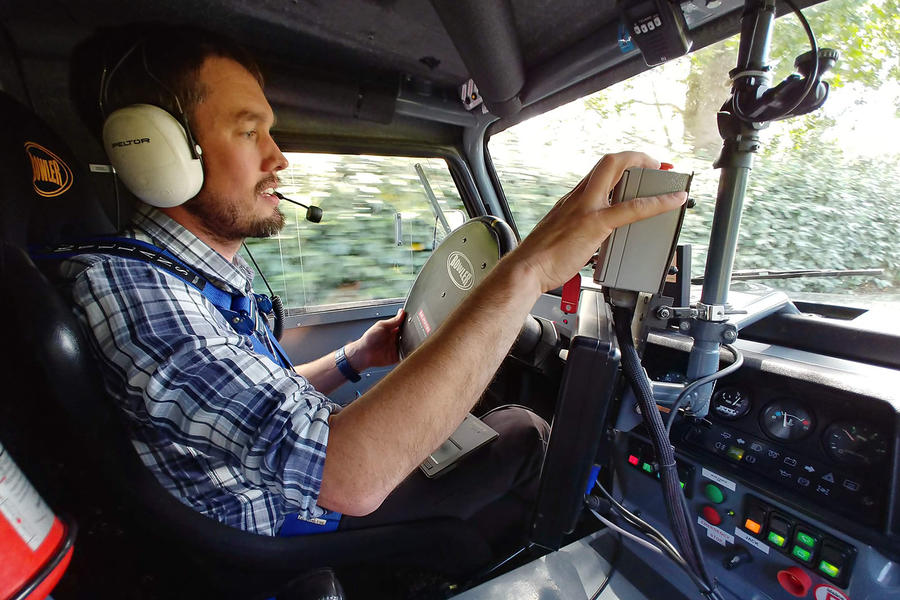 A few keyboard strokes switch the car from manual to self-driving. The researchers had instructed it to follow a set route for this latest test, using radar and LIDAR to keep it on the road, multiple cameras to perform object detection, and GPS data to track its location.

Unlike the basic GPS you’ll find in your smartphone — that's only accurate to around a 10-meter radius — Venturer’s system is accurate down to 5cm, as long as there’s a clear view of the sky. Without GPS lock, that accuracy drops to about half a metre.

That’s why the car constantly adjusted the steering wheel on the first part of the course, weaving slightly as it drove under some thick trees. It quickly stabilised once we were under a clear sky, smoothing out inputs and steering in a fixed line.

While braking was a tad jerky, this was partly down brake temperature, since my turn in the passenger seat came at the end of a full day of demo sessions.

Previous trials had also demonstrated vehicle-to-vehicle communication, with a sensor mounted on a bus indicating to the Wildcat whether it was safe to overtake on a blind bend. This is the connected future that Parkhurst says could lead to requirements for all cars to be hooked into a transport network.

“I can certainly see a future where vehicles need to meet a minimum level of connectivity," he said. "We’re already seeing restrictions in terms of air quality limits, so there could absolutely be technical limits imposed in certain areas or on certain roads.”