BACK TO ALL NEWS
Currently reading: Under the skin: how natural fibres are providing an alternative to carbonfibre
UP NEXT
Exclusive: Morgan bosses detail ambitious growth plans

Under the skin: how natural fibres are providing an alternative to carbonfibre

The use of natural fibres to make a composite material that’s more sustainable than carbonfibre is something mainstream car manufacturers have been looking at for a few years.

One of the favourite materials is flax, an ancient plant widely grown in the UK and elsewhere for the linseed it produces. Tellingly, its fibres are also used to manufacture linen.

Swiss firm Bcomp has made great strides with the new material, producing a reinforcement called Amplitex that consists of woven fabric made of flax fibres that can be impregnated with standard epoxy resin. Like carbonfibre, it can be woven in different ways and weights to suit various applications. For semi-structural use such as body panels, Amplitex is bonded on inside surfaces with ‘Powerribs’, also made from flax but resembling a kind of 3D grid to add stiffness to the finished component.

Making cars lighter and more efficient comes at a price because lightweight materials can consume more energy and generate more CO2 during manufacture. Carbonfibre is an example. The carbonisation process used to make the fibres requires temperatures of between 1000deg C and 3000deg C, depending on the properties required, and consumes large amounts of energy. Carbonfibre can’t be recycled into high-quality carbonfibre fabric, either.

Bcomp claims that using the combination of Amplitex and Powerribs instead of carbonfibre in bodywork reduces CO2 emissions during manufacture by 75% (16.9kg of CO2 per square metre for Amplitex with Powerribs and epoxy compared with around 45.6kg of CO2 per square metre for carbonfibre and epoxy). The natural fibre is also up to 30% less expensive while achieving the same stiffness and weight as carbonfibre in thin laminates.

There are no high-temperature processes involved between the field and the fabric, the crop is grown naturally and processing it is water based. After harvesting flax for making any kind of fabric, the flax is left lying in the field for a while to allow the outer surface to break down, making it easier to extract the fibres while enriching the soil at the same time.

Because Amplitex is made from a plant that absorbs CO2 from the atmosphere when growing, it can be incinerated at the end of its life and still remain CO2 neutral. Both carbonfibre and Amplitex use the same epoxy resin, which doesn’t come from renewable sources, and although the CO2 contribution of resin is relatively low compared with carbonfibre, Bcomp is working with partners on a more sustainable bio-resin.

Like so many advanced new technologies, this one made its debut in motorsport, and this year McLaren’s Formula 1 seats for Carlos Sainz and Lando Norris were made of it. In September, Porsche Motorsport’s new Cayman 718 GT4 CS MR was revealed at the Nürburgring 24-hour race sporting a full bodykit made using Amplitex with Powerribs.

Technology transfer is already moving to road cars. The Polestar Concept’s interior panels are made from Amplitex and Bcomp expects to launch products in “large-scale mobility” during 2021.

You need bottle to do this 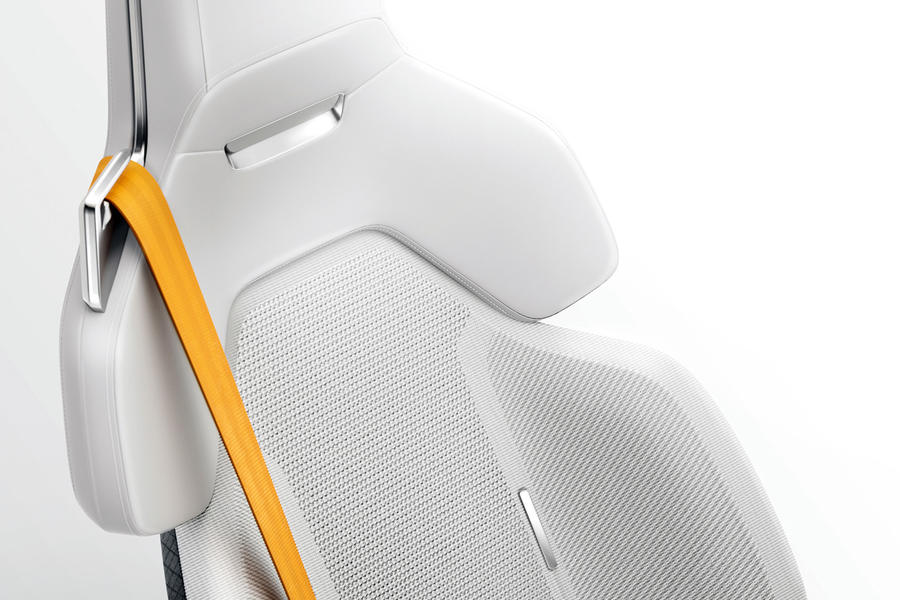 Interiors are getting greener. Polestar’s Concept showcases Bcomp’s sustainable alternative to plastic for interior panels. Polestar has also used fabrics made with yarn derived from recycled plastic bottles and Kvadrat, JLR’s alternative to leather, is also made partly from recycled bottles.

Jaguar Land Rover to use plastic waste in next-gen interiors

Final destination: One car's end-of-life journey to the scrapheap

Well, this looks promising, what's next?, a new compound to replace Rubber for making Tyres and other parts made from Rubber?