BACK TO ALL NEWS
Currently reading: Final destination: One car's end-of-life journey to the scrapheap
UP NEXT
Future BMW M3 to be ‘groundbreaking’ EV with traditional feel

Final destination: One car's end-of-life journey to the scrapheap

What happens when a car eventually reaches the end of its life? We drive a Vauxhall Zafira to the crusher and wince at its last moments
Open gallery
Close

As an Autocar reader, you’ll understand how it felt to be the last person to turn off the Zafira’s engine for the final time. I thought of the countless occasions it had been turned off over the past 99,000 miles and 18 or so years but always with the certainty of being restarted. Turned off after taking the kids to the theme park, on holidays, to the shops, to Grandad and Grandma’s at the weekend. Turned off after the drive to work each day, to the airport from time to time and to the garage for routine, and not so routine, work.

And now turned off for the very last time here at a vehicle recycling centre, where a car goes to be stripped, crushed and recycled but with no previous keepers present to pay tribute to its faithful service. Instead, that duty fell to me.

I’d grown quite fond of it over the past 20 or so miles when, in the company of lensman Luc, I drove it from ASM Auto Recycling, which lent it to us, and coaxed it around south Oxfordshire, mindful of its engine and low fuel warning lights blazing away. It reminded me of the Y-reg Zafira 1.8 Comfort auto I’d owned years ago. That car was a faithful and much loved family chariot. My wife cried when, eventually, we part-exchanged it for a Zafira 2.2 Design auto. I cried, too, when, some years later, the 2.2’s timing chain tensioner failed to the tune of £2000. 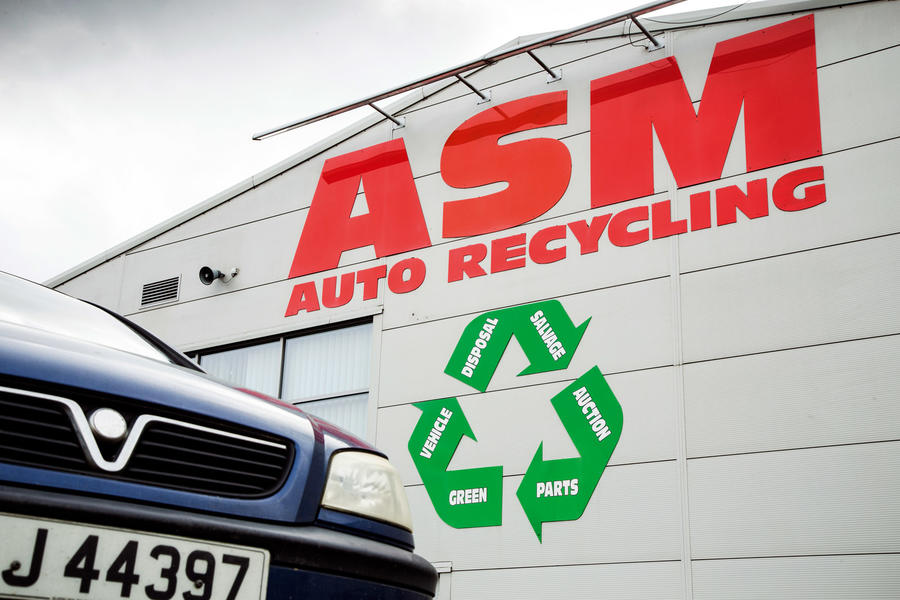 Back to today’s Zafira and Luc and I were looking for a graveyard. It’s was Luc’s idea. He thought the old Vauxhall framed by tombstones would make a great shot. Eventually, we found the perfect spot – a huge, 20,000-plot cemetery with good sight lines. It was in Cowley, a mile or so from the Mini plant. It being the first working day of a post-Brexit Britain, we tried not to read too much into their proximity…

The Zafira was registered on Jersey plates so has had an MOT test only once in its life, when the island introduced it last year. That being so, the engine warning light could only have come on since. An oxygen sensor issue, perhaps? The car’s rumbly drop links – a Zafira/Vauxhall Astra weak spot – must have escaped the tester’s attention since the bushes had clearly perished years before. Otherwise, it bowled along without complaint, causing us to reflect yet again on the pleasures of banger ownership, at least until the thing goes pop and you wish, instead, you’d put down what it cost as a deposit on a PCP.

Pics taken, I started the Zafira for the last time and we headed out of the graveyard to its final destination: ASM Auto Recycling, near Thame. ASM is one of the country’s busiest and most advanced vehicle recyclers, processing hundreds of end-of-life vehicles every week, auctioning write-offs to the repair industry and stripping, checking and reselling used parts to the trade and the public.

On arrival, our first stop was the company’s prepping centre. Here, cars are cleared of personal effects and anything that might cause a fire. ASM’s prep team showed me a van whose floor was littered with spent nitrous-oxide cartridges… Less dangerous personal effects are bagged up and held for six months awaiting possible collection by their owners. They filled one wall of the prepping centre. Among them were child car seats and buggies. 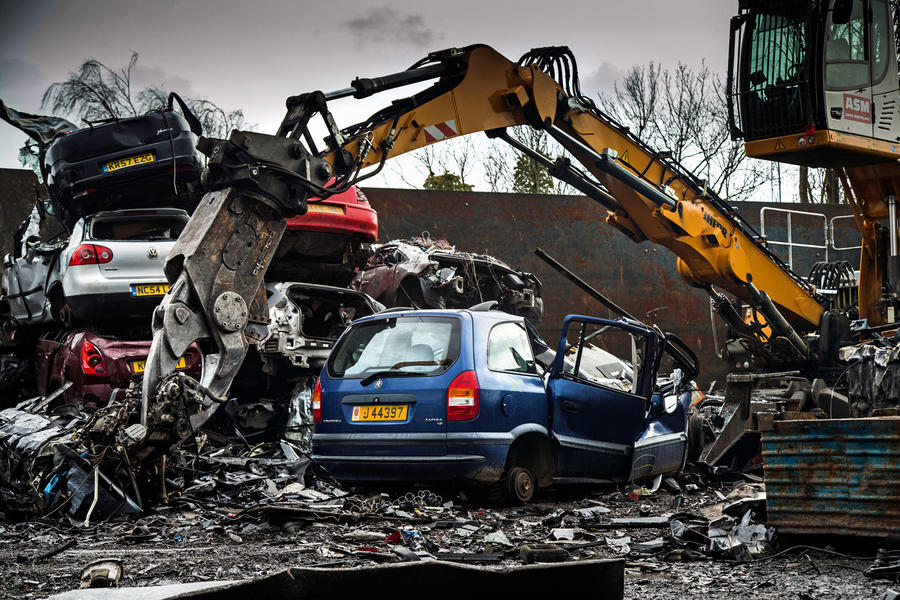 The Zafira’s personal effects extended only to a novelty strawberry dangling from the rear-view mirror, so the prep team waved it through to the next stage – but not under its own steam. Instead, a forklift approached it from the side, picked it up and carried it down the hall to Paul, who set about lowering its windows for the final time – “so the glass doesn’t explode when it’s grabbed outside” – and removing the fuel cap, wheels and battery. Behind him were bins full of wheel nuts, alternators, air-con compressors, space-saver spares and even jump leads, all harvested from scrapped vehicles.

Now the Zafira was ready for its date with Simon, elsewhere in the prep centre, who attached its vitals to a large suction pump that drained them of all fluids. To empty the fuel tank, he perforated it with what looked like a large, hollow drill and the fuel was sucked out through a hose attached to its side. Finally, he tapped off the brake discs and the Zafira was ready for the crusher.

Outside, a pair of mechanical grabbers, each controlled by a skilled operative, were flinging end-of-life cars around as if they were Corgi models they’d grown tired of. We watched, appalled, as our Zafira was offered to them. The first swooped on it, picked it up, dropped it and nudged it over. The car was by now almost unrecognisable and ready for the attentions of the second, which plunged its snout through the roof and ripped out the dashboard complete with trailing wiring loom. Then it turned the car over and tore off the back axle. Flipping the car around, it now spied the engine. Its pincers deftly snipped through the mountings and hoses and lifted it out, depositing it on a pile in the corner of the yard.

The other grabber now took over, picking up the car by an A-pillar before raising its steel stabilisers and rolling over to the crusher into which it placed the Zafira’s battered carcass. The crusher’s huge doors closed and, 30 seconds later, opened to allow the grabber to retrieve the former MPV, now a tangled bale of compressed steel, seats and interior trim. During the course of a single day, this trio of mechanical manglers rips, tears and crushes its way through 125 cars. 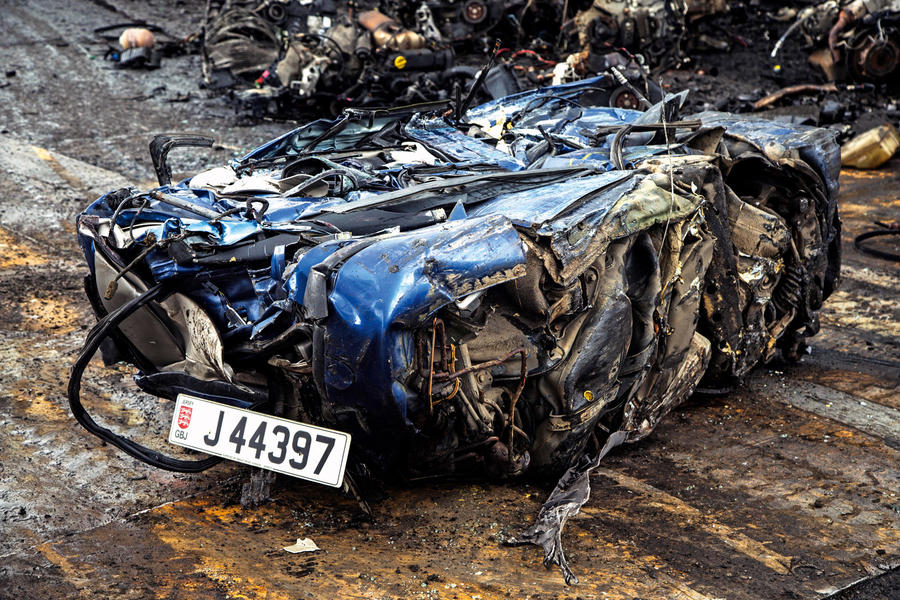 And that was our Zafira, reduced from a once-faithful family servant to a 6ft x 3ft metal cube. At least it was quick. Some end-of-lifers are given to the fire service to practise on. It doesn’t bear thinking about.

Why we should use more dead cars as 'organ donors' 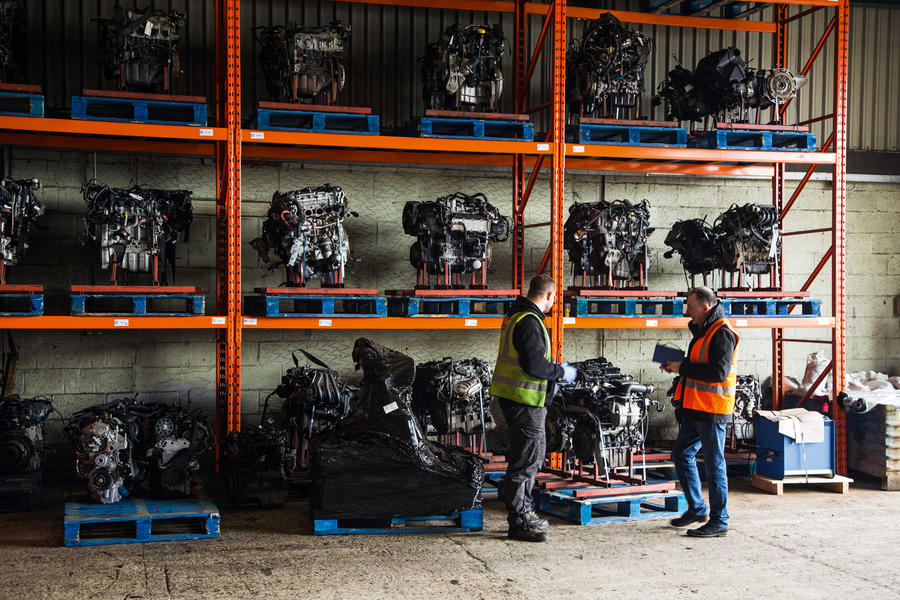 As its name implies, ASM Auto Recycling doesn’t just crush cars: it recycles them, too. With the rest of the salvage industry, it’s encouraging insurers and garages to favour the parts it recovers (and inspects, tests and guarantees) from cars over new ones when repairing vehicles. Doing so would bring the UK into line with France, where the use of recycled parts is now mandatory, and the US, where the practice has been widespread for decades.

The industry reckons increasing the use of recycled parts by 10% could save almost 190,000 tonnes of CO2 emissions every year produced from the manufacture of new parts and, if insurers can be persuaded to use them, help avoid write-offs and perhaps even lower the cost of insurance premiums and excesses.

To encourage customers to make the switch, the Vehicle Recyclers’ Association, a trade body, is developing a certification scheme for vehicle recyclers to ensure greater consistency and reliability of service, including the quality and description of parts, and to allow buyers to distinguish professional sellers from ‘all the rest’.

I used to know a bloke who bought a £150 car ( yes, this was  a few decades ago) , ran it for a year, if it needed any fettling he went to the scrapyard got whatever and sorted it himself, come next year, back to the Scrapyard , got the scrap value (about £180) and bought another right there, he did this for as long as I knew him, can't do that nowadays,cars are complicated now.

If you read Kia's 7 year

If you read Kia's 7 year warranty t&c's you'll see that they stipulate that they can use reconditioned parts! In the good old days, a scrapyard was how you kept your car going. My first car was a Kent engined mk3 fiesta, I had 25 years of fiestas that I could salvage parts from at that time. Eco motoring at it's best!
streaky 22 March 2020

They didn't seem to recycle much

I would have thought that more of the non-metallic items, namely much of the interior trim, would have been salvaged rather than being crushed up with the bodyshell.  You show a picture of door mirrors all neatly wrapped up but is that all they normally remove?