Many strengths have come to the fore over a year and almost 18,000 miles of hard graft and five-up recreational use
Open gallery
Close

It’s funny the things you find yourself missing once they’re gone.

Had you told me a year ago that I’d be recollecting my time with the Tucson with something approaching sentimentality, I would have laughed derisively and rolled my eyes like a tombola drum. But I’ve been separated from the old girl for only a few weeks and already there’s a misty layer of wistfulness descending over the recent memory. I think, perhaps, that’s because a good many of the most memorable things I did last year had the Tucson’s unfussy practicality at their centre.

Trips such as an outdoor adventure holiday to the Isle of Skye, a music festival in Cambridgeshire or going to the Edinburgh Festival Fringe were made possible by the car’s ability to swallow four or five people and their luggage and its uncanny ability to do everything with a passive sense of amiability and comfort.

Skye alone is about a 1200-mile round trip from where I live, which in five-person, full-car road trip terms is actually about 6000 miles. I recall one of Autocar’s road testers telling me beforehand that he’d completed the journey on his own in the long-striding splendour of a Jaguar F-Type and still had to restrain himself from opening one of his carotid arteries on the way back such was the arduous nature of the drive. But in the hearty Tucson, even with a third person wedged onto the rear bench, we seemed to hardly notice the miles slide benignly past. 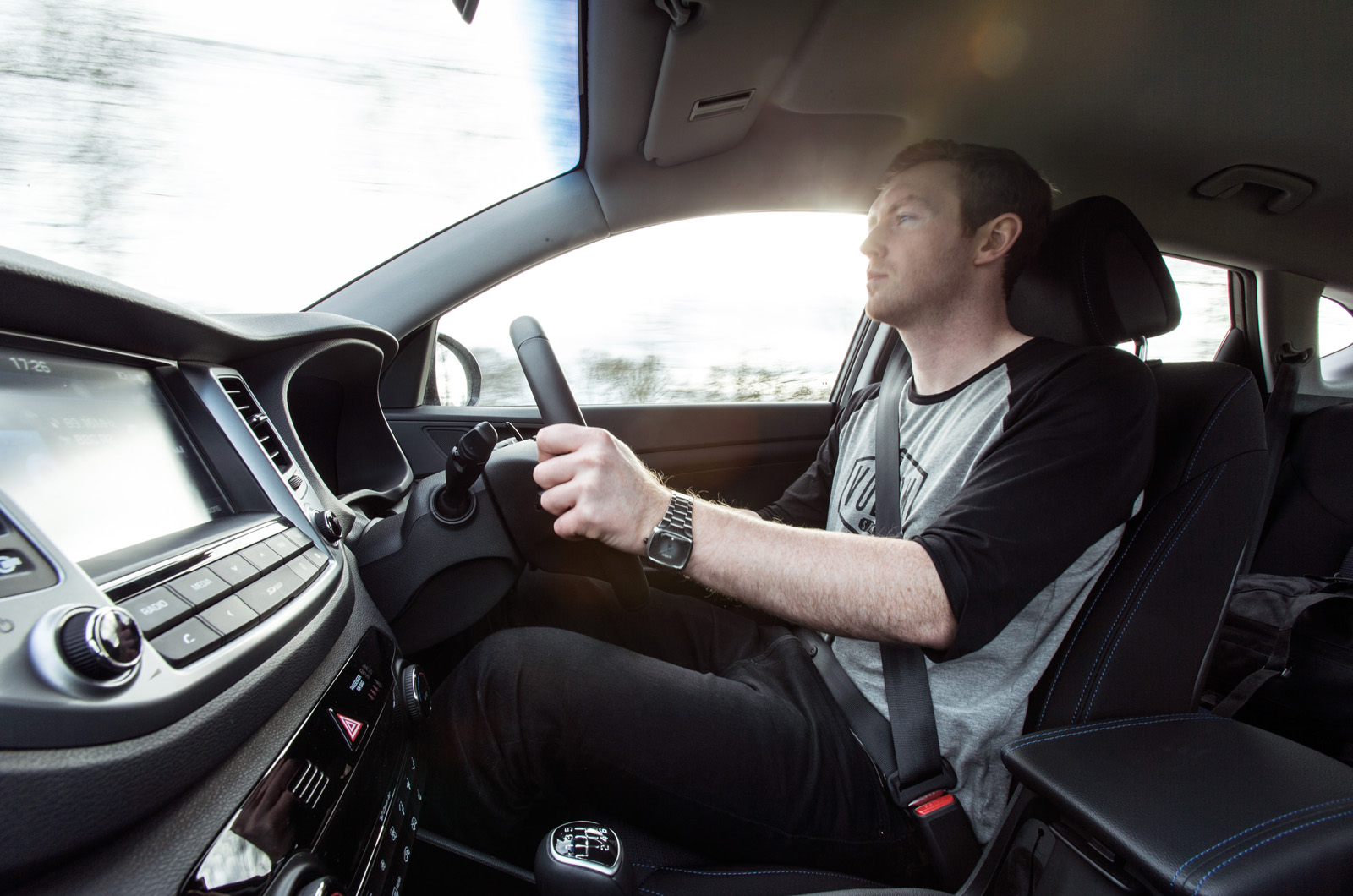 Perhaps we were all anaesthetised by the amount of money we’d saved by not flying – yet that signifies only another arrow in the Tucson’s quiver: a dependable capacity for returning predictable (if not quite stellar) oil-burning mileage. I could rely on Hyundai’s stalwart 1.7-litre diesel engine to return 42mpg virtually no matter what was in it or at what feverpitch pace I chose to drove it.

Which isn’t to claim that the experience was completely flawless. Like any relationship, there were occasional snags on which to unravel an otherwise lovely day. Chief among them in a general usability sense was unquestionably the sat-nav – or, more specifically, its questionable response to being presented with serious traffic jams in the course of a journey. Sensing an impending hold-up, it would offer you a choice of diversionary routes – a not unusual feature of modern sat-nav systems. But in the Tucson, the on-screen pop up offering you new routes would block out your original estimated time of arrival and instead show you how long the new route was likely to take, so you had to do the sums yourself before making a decision.

This would be fine were the system dutifully shortening your time on the road by 10 minutes or more. More often than not, though, it would persist in offering you a shortcut that might save you enough time to miss about three adverts on the radio. And I use the word ‘shortcut’ in the loosest possible sense: following a colleague back from a photo shoot one day, I chose the navigation’s alternative offer over the conventional route he chose and ended up at the office about 15 minutes after he’d arrived.

The second notable hitch provided me with experience of the dealer network and was the result of a wiring loom fault that put the car into a power-limiting limp-home mode. This was a known issue that a ‘proper’ owner would have been informed about – rather than being left to discover it while driving on the M1. Still, despite an obvious shortage of dealers in south London, where our car was based, the problem was put right in a jiffy – along with a faulty secondary bonnet catch recall, about which I was none the wiser, either. 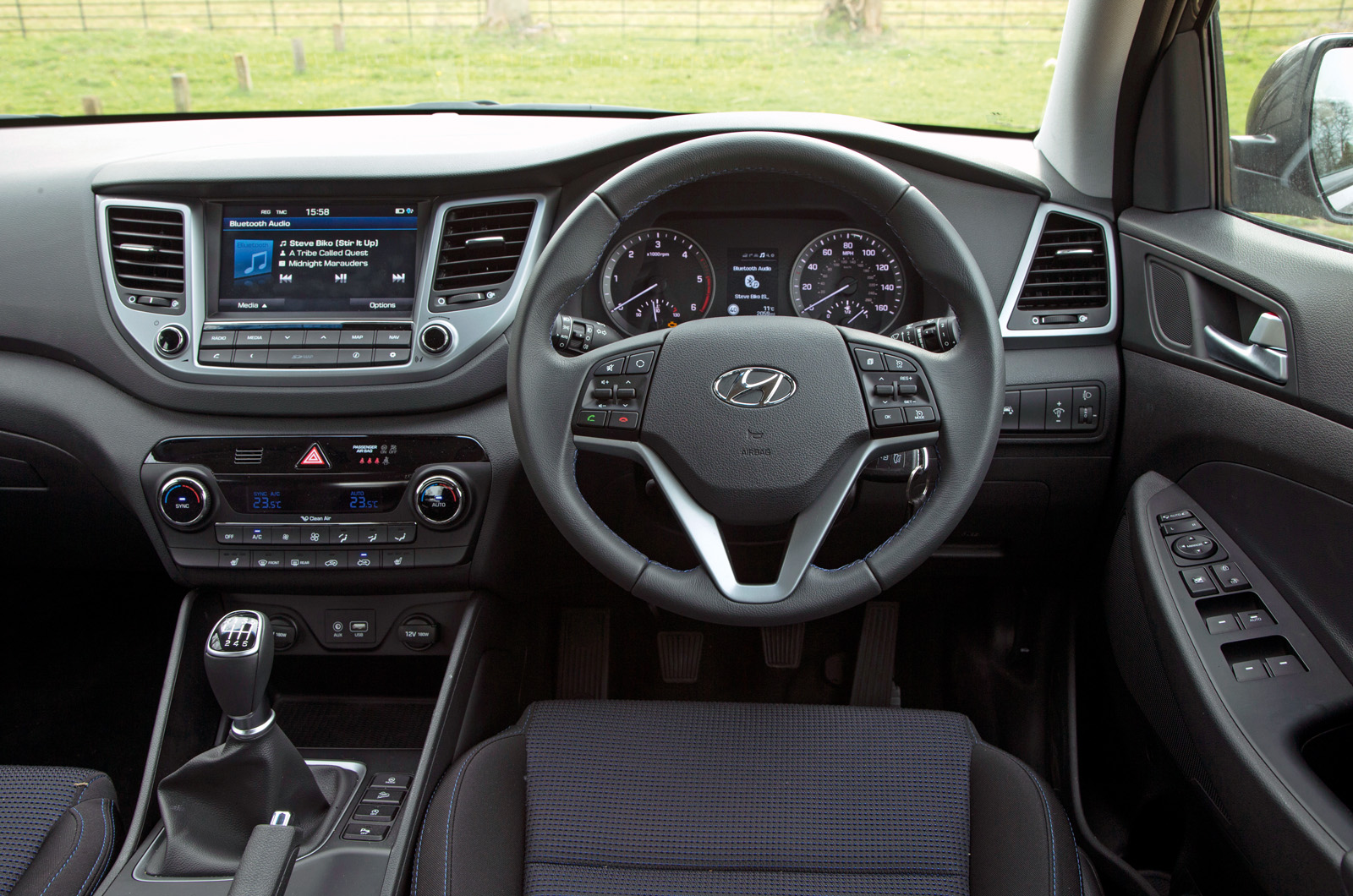 Otherwise, the Tucson rarely came up short. Hyundai claims 488 litres for the boot – around 50 litres less than that of the Ford Mondeo, which preceded it as my work car – but I could still get my camera gear in it.

I could hardly have asked for more kit to play with inside. Even allowing for Hyundai’s famous generosity, the SE Nav trim was conspicuously well stocked: cruise control, heated front seats and dual-zone climate control were all standard. In fact, the only added extra was the paint: £620 for the Moon Rock Pearl colour that I initially found rather boring but then rather grew to like.

That, naturally, is the Tucson’s epitaph. Had I been given my choice of compact crossovers at the beginning of last year, I would probably have played it safe with a Nissan Qashqai, a Ford Kuga or a Skoda Yeti. Perhaps at times, they would have been more compelling, pointier or parsimonious, yet I doubt any of them would have conquered as many miles with as much affability as the Tucson. Nor would they have claimed to outstrip its hardwearing durability or the sense of dependability that came with it.

The Tucson fitted my life perfectly, and it was as indispensable to me as the roof over my flat or the MacBook I type at. A tool, then, but no less essential for it. So long, old friend.

Read our previous reports below

On the way back to London from Leeds a few months ago, the Hyundai Tucson came over all sickly and began limiting power in third and fourth gears. The engine warning light came on, too.

Desperate to get home and disinclined to spend an evening awaiting recovery on the M1, I ignored the issue and continued south. Faithful as a wounded husky, the Tucson delivered me home – and was fine for the next few days.

Then a colleague had the same problem while commuting in our car, to the point where he thought that he might come to a halt on a long incline. It was clearly time to consult a dealer.

That was easier said than done. Hyundai apparently has only three main dealers in south London – which, given the amount of three-year-old South Korean product I see in the capital, must leave them with around a billion customers each. The chap at Croydon said they could see me in two weeks, then they called back to say they could squeeze me in. But when I got there, they said they couldn’t. Then they noticed who the car was registered to and the wounded Tucson was whisked in.

Because our car isn’t registered to me, the notes a dealer would dispatch to owners warning them of known issues never reached my door. So as well as not knowing that the car was liable to suffer from a wiring loom issue (hence the half-mast power output), I also didn’t know there had been a recall regarding the secondary bonnet catch, which isn’t up to the job of stopping the bonnet from flying open if you fail to shut it properly.

The dealer put this chain of events together in a nanosecond and had the car turned around in no time, even finding a moment to remove the layer of grime that was attached to it.

And your normal punter would have has a 2 week wait?

"Then they noticed who the car was registered to and the wounded Tucson was whisked" does that mean it came up as press car which meant prompter service rather than no service.