BACK TO ALL NEWS
Currently reading: Volkswagen Touareg R is 456bhp hot hybrid
UP NEXT
UK electric car ownership jumped 53% in 2020

Volkswagen has pulled the wraps off its new fast flagship, the Touareg R.

In keeping with the high-performance R sub-brand’s recent commitment to electrification, the new SUV uses a plug-in hybrid drivetrain to deliver 456bhp and can travel for up to 30 miles in electric-only mode. Performance figures have yet to be confirmed, but expect the 0-62mph sprint to take around 5.0sec and an electronically limited top speed of 155mph.

Autocar was shown around the Touareg R by the head of R division, Jost Capito, who revealed why Volkswagen had opted to make the model a plug-in hybrid rather than use the more powerful mild-hybrid V8 from sibling brand Audi’s recently launched RS Q8.

“The Touareg is the perfect car for the step into electrification,” explained Capito. “The engines from these other cars were never considered, as the Touareg is designed as a comfortable fast cruiser that needs to go from comfortable to sporty, but not extreme sporty. This is a car for enthusiasts but also for people with active lifestyles.” 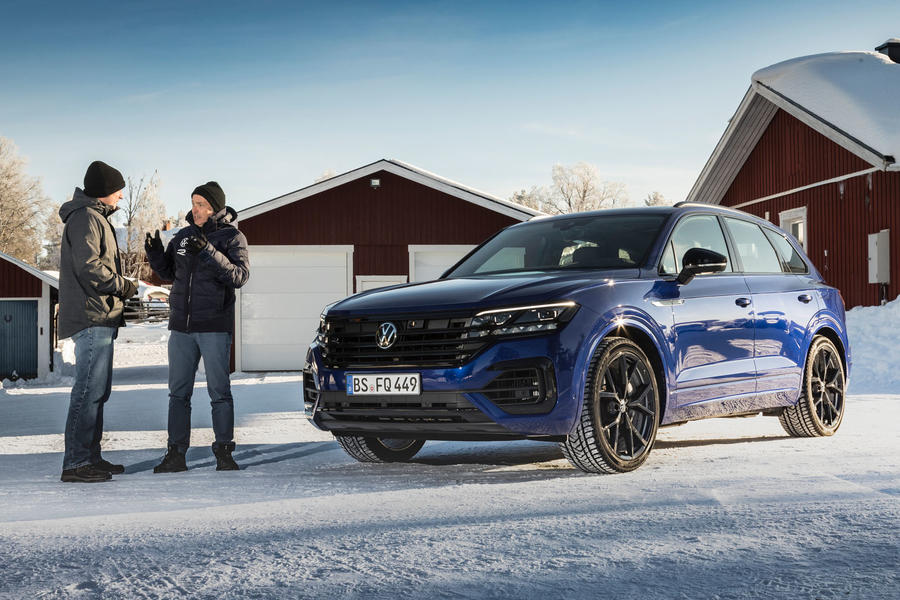 The petrol-electric set-up is essentially the same one that has already been seen in the latest Porsche Cayenne and Panamera. It comprises a 335bhp turbocharged 2.9-litre V6 mated to a 134bhp electric motor that sits between the engine and the eight-speed Tiptronic automatic gearbox and is powered by a 14.1kWh battery mounted beneath the boot floor. Combined power output is 456bhp, while total torque is a muscular 516lb ft.

“Using this drivetrain was a bit opportunistic,” explained Capito. “With the relatively low volumes that R achieves, we can’t develop a standalone hybrid system, so we have to look around for what’s already available in the [Volkswagen] Group. If we do a car that can’t be built on the existing line, the price goes way up. This is why I love working for R, because I can deliver cars that are for people who love driving yet are also affordable.”

As you would expect, there are numerous hybrid-related settings. Among them is E-Mode, which allows electric-only driving at speeds of up to 87mph before the V6 kicks in. It also fires up when you request kickdown by fully opening the throttle.

When the battery is running low, it’s possible to set the level of charge that you desire, which the system then achieves by using the V6 as a generator and increasing the level of regenerative braking.

To enable the Touareg to maintain its off-road prowess and 3.5-tonne towing weight (around 80% of customers tow with their Touaregs), the R model retains the Torsen-equipped four-wheel drive transmission with various on- and off-road driving modes. Unlike the Golf R and T-Roc R, however, it has no Race mode. In normal running, up to 80% of the engine’s torque can be sent to the front axle and up to 70% to the rear axle.

As with the regular Touareg, customers will be able to order an Off-Road Package complete with improved underbody protection and extra traction control settings for driving on gravel, mud and sand. 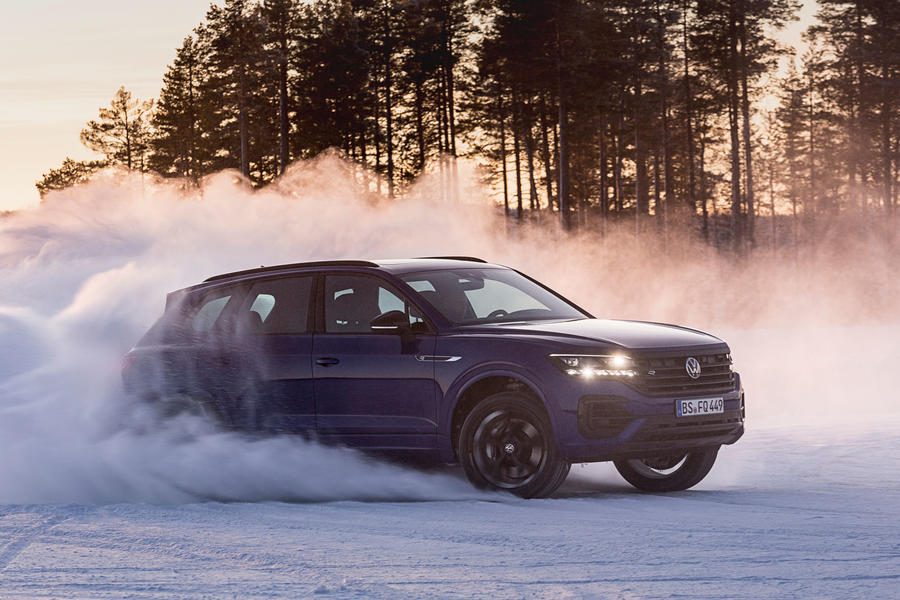 The regular Touareg’s air springs and adaptive dampers are also retained, unusually with no alterations made to either hardware or software. “We didn’t feel we needed to make any changes,” Capito explained. “The standard set-up is good and we wanted to retain the car’s everyday usability. This is a car that will have to do everything”.

The need to package a bulky battery above the rear axle means the Touareg R isn’t available with neither the 48V active anti-roll bars that are optional on other models nor the four-wheel steering system. However, Capito revealed that these systems would likely be incorporated into a future facelifted model.

What has been included is the latest version of Volkswagen’s Travel Assist adaptive cruise control system, which can steer, accelerate and brake the Touareg at speeds of up to 155mph – 15mph more than the original iteration. 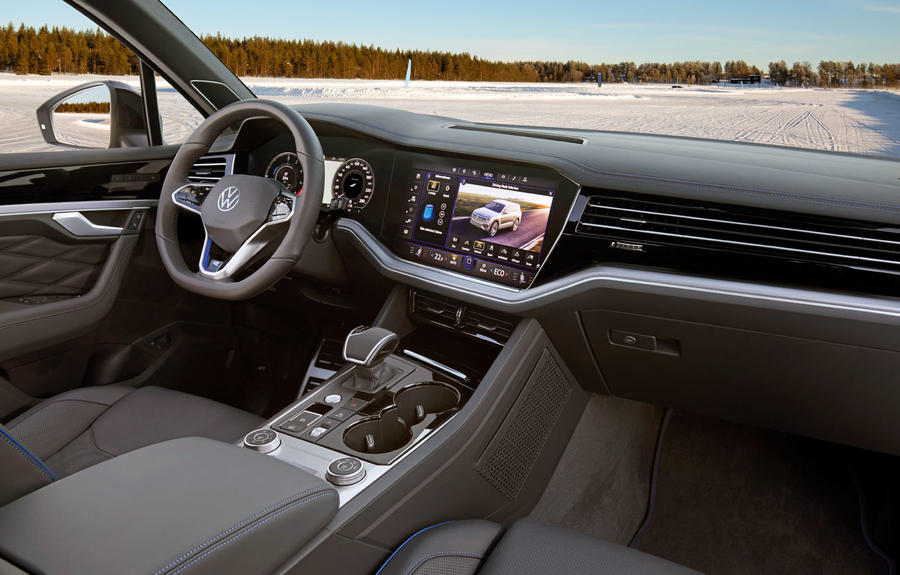 Visually, the new car is every inch an R model, in particular thanks to the Lapiz Blue paint of the pre-production example we saw. In addition to R badges, there’s a subtle bodykit and gloss black inserts, plus 20in Braga alloy wheels or optional 22in Estoril rims.

Inside, R logos are embossed on grey-piped leather seats and there’s piano black trim for the dashboard, centre console and doors.

The Touareg R is expected to go on sale late this year. Pricing is yet to be revealed.

.....When the battery is done. This motor is not very economical in the A7 never mind this big barge.

....Great secondhand buy though - Touaregs always lose a lot of money from new (probably the surest sign that they are over priced new).

At last a decent Touareg without a smelly diseasel engine....I will be looking for one of these when they are two years old.

Will it be too expensive for a VW?

The equivalent X5 M50i/M50d and SQ7 are around £70k. If the Golf R pricing compared to the M135i and Audi S3 is used as a benchmark, the Touareg R won't be too far off its rivals. Even if it's a brilliant car and has the quality and feel of a £60k+ car, will many people actually pay that much for a car with a VW badge on it, in the UK at least, even if it has the performance to merit the R badge? Some brands are perceived to stretch only to a certain level price wise in some markets. I doubt the Touareg R will fly out of showrooms if it makes it to the UK.

Nothing to do with badge snobbery - BMWs drive well, VWs dont.

Nothing to do with badge snobbery - BMWs drive well, VWs dont.

My opinion has nothing to do with you, Muppet head