Based on Volkswagen’s MEB platform, the new four-door model is planned to go on sale in China during the second half of 2023, with production initially set to take place at Volkswagen joint venture partners FAW (First Automobile Works) and SAIC (Shanghai Automotive Industry Corporation) in the cities of Changchun and Shanghai respectively.

European production of the approximately five-metre saloon will take place at Volkswagen’s Emden plant in Germany, with right-hand-drive UK sales slated to begin in the first half of 2024, according to officials from the German car maker.

An estate version of the new model – called the Tourer – is also mooted, though it isn’t likely to see production until 2025 at the earliest.

Autocar has been told the ID Aero will take the ID 6 saloon name in production, positioning it alongside the Chinese-market-only Volkswagen ID 6 SUV at the head of the ID line-up.

A prominent Volkswagen badge forms the centrepiece of the ID Aero’s front-end styling. It is intersected by a light bar housing recessed headlights with new LED graphics either side. Below, there is a structured bumper with three individual vertically stacked daytime-running lights at each corner and a high gloss black insert in the middle. A short bonnet takes full advantage of the packaging advantages offered by the MEB platform. 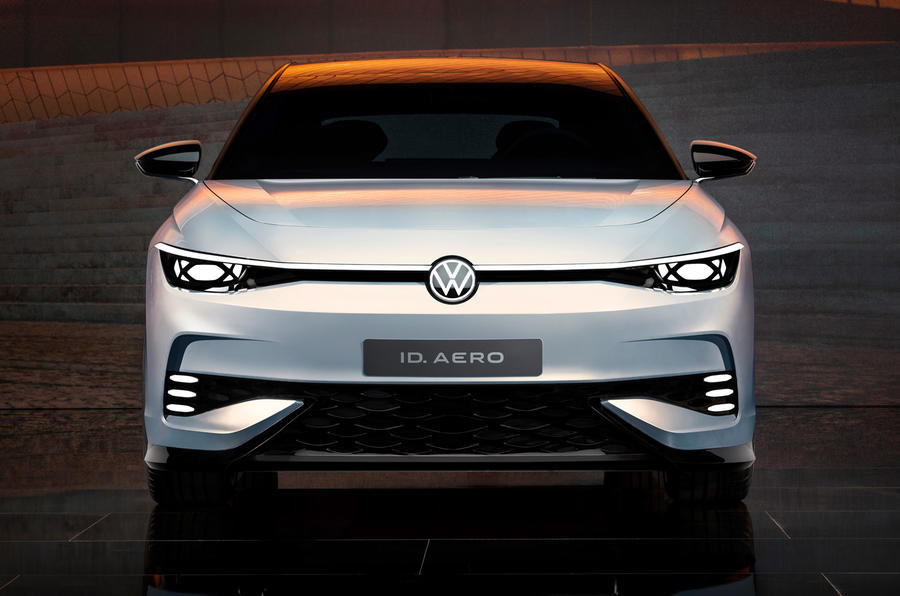 Further back, the ID Aero features a high waistline, with a deep etched swage running from the headlights all the way back to the tail-lights providing it with a distinctive shoulder line. It also adopts flush door handles and a wheelbase dimensioned to accept wheels up to 22in in diameter. The rear receives a high-set boot, a full-width wraparound light bar and an illuminated Volkswagen badge.

With a drag co-efficient of 0.23, the ID Aero promises to be the most aerodynamically efficient of Volkswagen’s new wave of electric models.

Dimensionally, it is longer than the existing 4767mm-long Passat. The wheelbase, meanwhile, is said to stretch to close to 3000mm.

The concept features a 77kWh battery, which Volkswagen says will provide the production version of the ID Aero with a range of up to 385 miles on the WLTP test cycle. Other battery options are planned to be offered, including a smaller 52kWh unit.

Volkswagen has yet to confirm the power options, but as with other ID models, including the closely related ID 4 and ID 5, the production version is expected to offer the choice of either single-motor/rear-wheel-drive or dual-motor/four-wheel-drive configurations.

To make way for production of the ID Aero in Emden, Volkswagen plans to relocate production of the next-generation Passat to a Skoda-run factory in Kvasiny, Czech Republic, where it will be produced alongside the next Skoda Superb.

Great. Can we have an estate version please?

Doesn't look very "low slung" to me. Looks a right old lump. It's going to make the Model 3 look dainty.

Like all of VW's other ID models, a completely anonymous and forgetabble generic bar of soap.  Yawn.