Viewed from inside, from the B-pillar forwards or from underneath, telling the new Volkswagen ID 5 apart from the straighter-backed Volkswagen ID 4 launched last year will be no mean feat.

After all, they each use the Volkswagen Group’s MEB EV architecture, can both be had with a rear or four-wheel-drive powertrain and offer broadly comparable performance and efficiency statistics.

But because the roofline on this – Volkswagen’s third bespoke electric car and the ninth (yup, ninth) entry into its swelling SUV portfolio – slopes towards the rear for a more aerodynamic and coupé-esque profile, it’s treated as a brand new model. Much like the closely related Audi Q4 E-tron Sportback and Skoda Enyaq iV Coupé, both also rakish roofed variants of conventional mid-size electric SUVs.

Right, got all that? Let’s crack on.

The ID 5 is available from launch with a choice of two single-motor, rear-wheel-drive powertrains, one with 172bhp and the other with 201bhp, or, in the range-topping GTX guise driven here, with a dual-motor, four-wheel-drive set-up good for 295bhp and 0-62mph in 6.3sec.

A 77kWh battery is standard across the line-up, giving a range of between 304 and 323 miles depending on the specification (very slightly up on the more upright ID 4).

Volkswagen is at pains to muffle any direct comparison between the hallowed GTI name and the products from this new electric performance family. GTX, it says, is to the ID 5 “what the GTE and GTD models are for the Golf”, which is to say better equipped, more aggressively styled and more powerful but not necessarily – as implied by the omission – a tangibly keener steer. 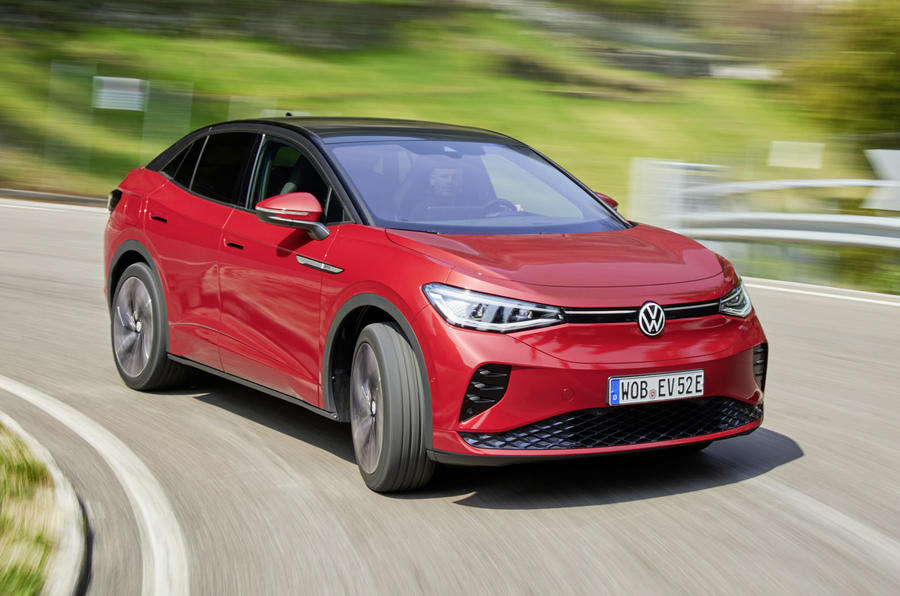 Still, this is an impressively quick car, and no doubt about it – which is surprising really, because in terms of power-to-weight, with 136bhp per tonne, it’s roughly on a par with your average family hatchback.

The ID 5 GTX serves up its power instantly and constantly up to a relatively high tail-off point, meaning it can effectively all be exploited all of the time. It’s not pin-you-back-in-your-seat fast but certainly feels worthy of a more sporting moniker, at least by virtue of its superior straight-line pace compared with the rear-driven Pro Performance.

There’s also a reassuring surefootedness to the way the ID 5 GTX threads itself down a twisty road. What the steering lacks in feel and communication it makes up for in precision and predictability, which means more engaging stretches of Tarmac can at least be tackled with speed and confidence, if not wilful abandon.

With the chunky underfloor battery giving a low centre of gravity and weight shared fairly across both axles, there’s more than a hint of dynamic agility to exploit, particularly given how easy it is to build speed between corners.

Sitting 15mm closer to the ground on uniquely tuned suspension, the ID 5 GTX can be tipped into bends at a good lick without giving way overtly to lateral movement, responding quickly, accurately and predictably to turn-in.

The tangible input of the four-wheel-drive system’s torque-vectoring capacity (it’s rear-biased as standard) means you can almost feel the car rotating around you, which can feel fun in the right scenario, but more often these are welcome traits because of the sheer ease and amenability they bring to the driving experience.

The uncommunicative brake pedal will take some familiarisation, but stay out of Sport driving mode and you soon find the regenerative effect is effective enough to shed speed as required - with the added benefit of slowing battery depletion.

If the ID 5 GTX’s dynamics win out over rivals anywhere, though, it’s in confronting those everyday obstacles  – unfinished roads, potholes, expansion joints and speedbumps – that so often highlight the inherent rigidity of a skateboard-style architecture.

At no point on a lengthy mixed route did our ID 5 GTX feel any less composed or more compromised than the conventionally fuelled Volkswagen Tiguan (or even the softer single-motor ID 5).

And while the absence of a combustion engine usually exacerbates the effects of tyre and wind roar, their inteference with the ID 5’s rolling refinement is minimal at best.

The ID 5 is the first car to roll out of the factory equipped with the latest generation of Volkswagen's oft-lambasted Software 3.0 platform. The firm touts the upgraded charging capacity of this new system (introduced to the Volkswagen ID 3 and ID 4 via over-the-air update) as a headline improvement, but already 135kW is starting to feel a touch lethargic when some of its closest rivals with 800V hardware can muster supersonic 350kW top-ups.

But it also gets an advanced route-mapping function that can ensure you reach your destination with a predetermined amount of charge left in the battery by planning a route that takes in a specific number of charging stations and calculates exactly how long needs to be spent at each. Plus, we found the rate of discharge to be impressively predictable, which is to say largely unfazed by repeated variations in speed or brief spells of spirited driving - meaning a real-world range of 250 miles is well within reach.

Also impressive is the new Park Assist Plus package, which can remember complex parking manoeuvres of up to 50 metres so that you can stop park outside your house, press a button and relax as the car threads itself between the neighbours’ cars, up the driveway, around the flowerbed and into its designated spot.

But while Volkswagen says it has listened to customers' feedback in rolling out new functions as part of this latest generation of software, the fact remains that the system simply requires too much interaction to be used effectively on the move.

The touch-sensitive control sliders for the climate and audio volume give no haptic feedback and are still unlit, so both day and night they take a good deal of your attention off the road ahead. And with all the other functions buried in touchscreen menus, you quickly learn that it’s better to make sure everything is set up before you set off. 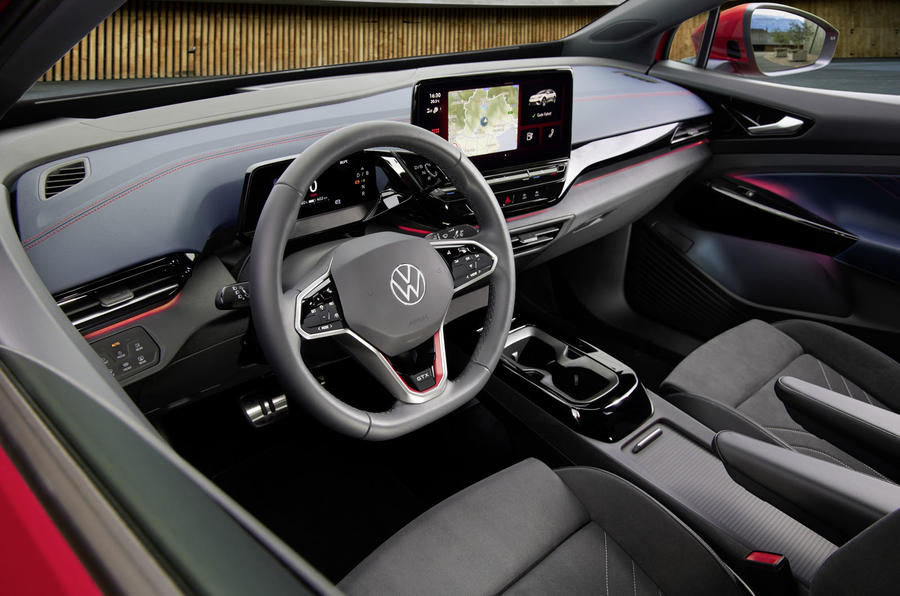 The ID 5 will be a lot of things to a lot of people: tech-heavy, practical, easy to rub along with, decent to look at and – in GTX form – a sufficiently potent and engaging steer.

The trouble will be the rivals it faces that can be all those things (and perhaps a few more besides) at this price point and some way below it. The closest-matched variant of the similarly sized Kia EV6, for example, brings a touch more power to the table, a more dynamically rewarding chassis and roughly the same range for around £10,000 less.

Not that the ID 5 deserves to be overlooked in its capacity as a dependable, refined and efficient proposition with a vast kit list and a good dose of kerb appeal. 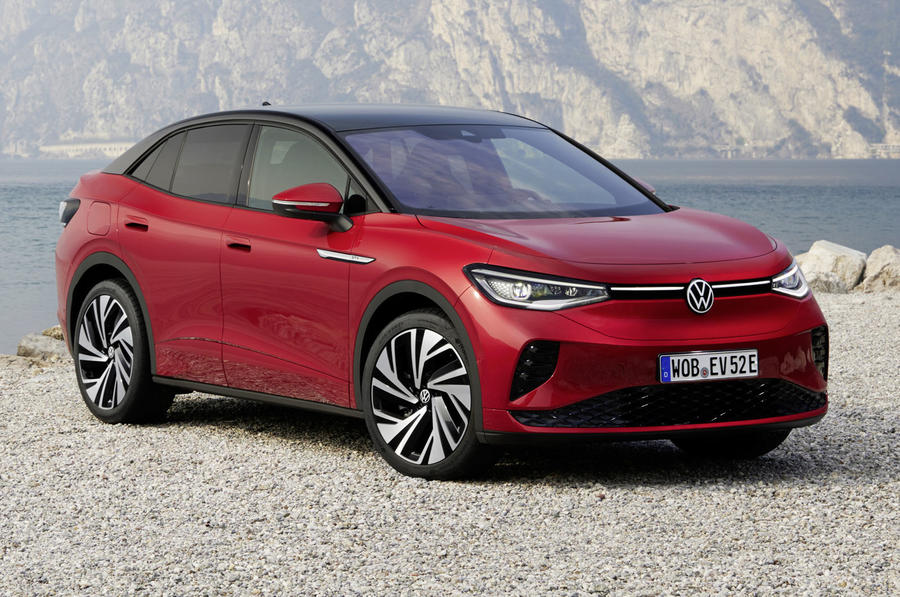