BACK TO ALL NEWS
Currently reading: Vauxhall design concept hints at brand’s future styling
UP NEXT
Ford Kuga PHEV deliveries halted due to battery fires

Vauxhall has shown the first glimpse of a design concept that will preview the design of its future models, centring around the Insignia.

The concept, which could be fully revealed at this year's Paris motor show but has been shown only in images so far, features the familiar, scythe-shaped daytime running lights that feature on the brand’s current models. This is the only design detail to have been revealed so far.

The car takes the form of a low-slung model, with a long bonnet that features a more pronounced central crease than the Insignia's and a shallow glass area that harks back to Opel sports cars of old. However, the concept is depicted under a sheet, so it’s not yet clear whether it's a two or four-door model.

A lesser focus on the grille in what design details can be seen suggests that the brand’s design will focus more upon EVs - confirmed by Vauxhall’s plan for the eCorsa in 2020. The Corsa is currently the UK's fifth-best-selling car, making it Vauxhall's and the PSA Group's best-seller.

The lights stretch almost the full width of the new concept's front, too, suggesting that Vauxhall will abandon the tall, central grille it currently uses and revert back to a wider grille - a hallmark of Vauxhall's earlier models – for its conventionally powered cars.

Opel CEO Michael Lohscheller revealed that Vauxhall and its sister brand will still share designs in the future and that they are still “finding a new face right now”.

Despite the concept having the appearance of a sports car, Opel-Vauxhall does not have any immediate plans to launch a halo model, said Lohscheller. “They might become a little easier for us as part of a bigger group, but we would have to find intelligent solutions,” he said.

What the concept doesn't preview is a production version of the 2016 GT concept - a 144bhp, 1.0-litre-engined rival to the Mazda MX-5.

The 10 best-selling cars in Britain 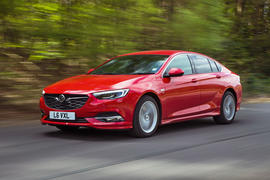 Is that a Viva HC convertible

Is that a Viva HC convertible?!?

14 June 2018
They need to find their pizzazz again. The Adam is a STUPID name. The Corsa is 2 gens out of date. The Astra is fine - lithe & competent. The Insignia...overly-pretentious new name - they're still beating the same rhythm, it's not 1993 any more. Grandland X is another stupid name. Sort it out before you go under.

They need to find their pizzazz again. The Adam is a STUPID name. The Corsa is 2 gens out of date. The Astra is fine - lithe & competent. The Insignia...overly-pretentious new name - they're still beating the same rhythm, it's not 1993 any more. Grandland X is another stupid name. Sort it out before you go under.

I always liked those. When they try they can do a good job, or could anyway, but the names are often a bit rubbish.

They need to find their pizzazz again. The Adam is a STUPID name. The Corsa is 2 gens out of date. The Astra is fine - lithe & competent. The Insignia...overly-pretentious new name - they're still beating the same rhythm, it's not 1993 any more. Grandland X is another stupid name. Sort it out before you go under.

The marketing of the Grandad X raised some eyebrows, showing pyjama clad chavs dropping their kids off.

Nothing screams 'old man' more than a Vauxhall badge - and I'm an old man. Curiously I always admired the Opel Manta in my youth so don't carry the same 'brand negativity' (again, I'm too old to 'unlearn it') with Opel. This is all my own opinion, I recognise and respect those of others, and yes - brand is a reality in my life, congrats if it is not in yours. etc. etc.

New design concept is so ugly they've gotta keep it covered up!!!!!!!!

At least Vauxhall/Opel seem to recognise their lack of flair

I doubt there is any manufacturer that has produced such a range of dull, boring, bland, anonymous vehicles anywhere else on the planet.....

Everyone trusts VW because they are ultra reliable & they never cheat, do they??????

Although they do their best to hide it.

VW cars my be conservative but they are still classy with some key halo cars like Golf GTi to lift their image.